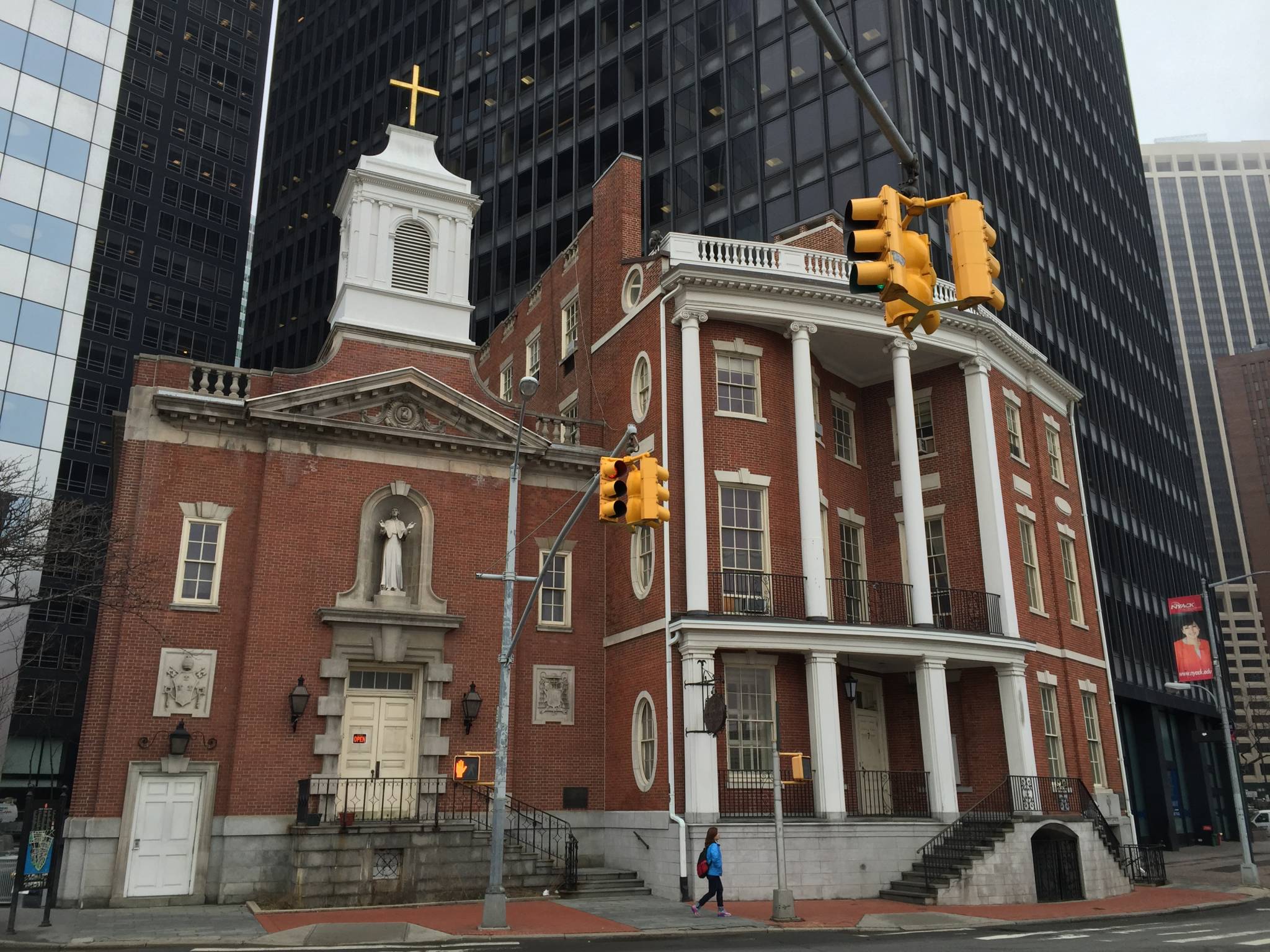 “New York has existed for me simultaneously as a map to be learned and a place to aspire to,

a city of things and a city of signs.

The place I actually am and the place I would like to be even when I am here.”

New York has to be read between lines, it has to be lived and explored.

It’s a definitely unique city, which is able like few to show you futuristic architectural masterpieces and in the same time, maybe in few blocks, tell you an old captivating history.

Every borough, every area has its charming and rich experiences made of characters, anecdotes and events incredibly surprising whose discovering makes the New Yorker experience definitely more intense and emotional.

Like Lower Manhattan, the most ancient inhabited area not only of the whole Manhattan island but of all five boroughs of the city (Bronx, Queens, Brooklyn and Staten Island). 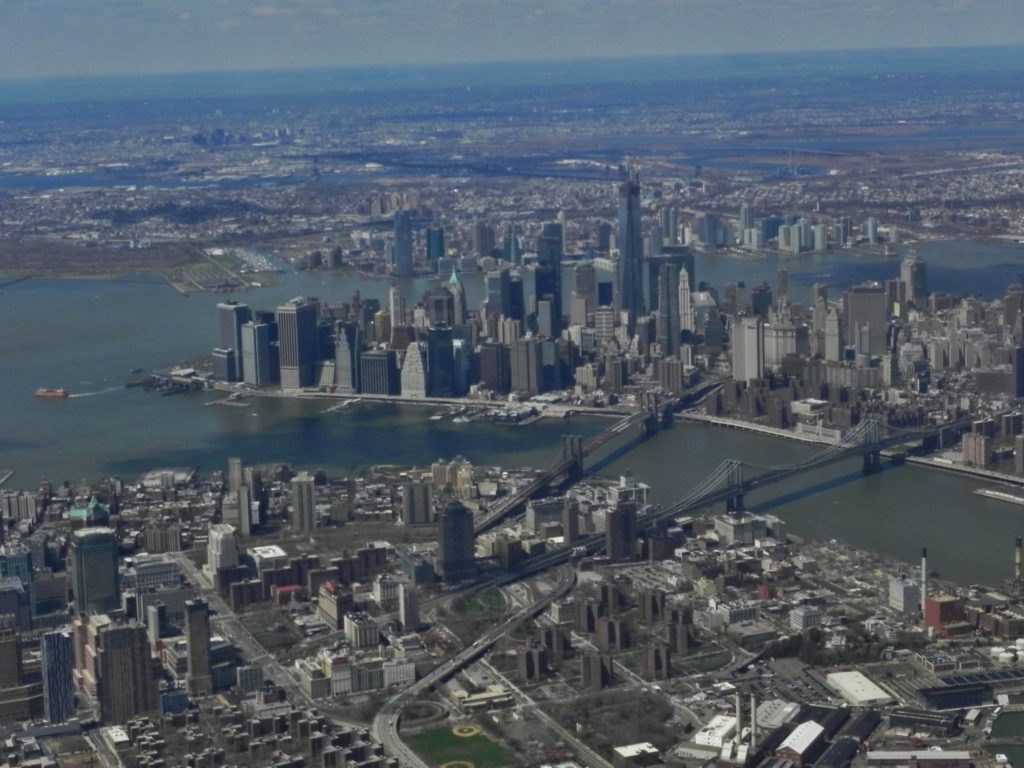 All of us know it for Ground Zero and the tragic events related to the 9/11/2001 terrorist attacks, for the Memorial and the Museum tied, for Wall Street (the greatest financial district in the whole country), for the New York Stock Exchange and the questionable Charging Bull (a giant bronze bull appeared suddenly at the end of the 1980s after a big financial crash).

Or even for the South Street Seaport, the heart of the old New York harbor, for the access to the Brooklyn Bridge or for Battery Park, the furthermost point of Manhattan from where the tourist ferries to Liberty and Ellis Island leave.

But there’s more and it takes little over two hours on foot, stops included, to discover some little treasures, more or less hidden.

Once you ended the tour (it cannot be missed) of the Memorial Plaza in Ground Zero and of the very New National September 11 Memorial Museum, go back on the Brooklyn southwards. At Wall Street turn on the left for the photo de rigueur in front of the New York Stock Exchange, one of the biggest Stock Exchanges in the world for stock indexes and businesses, forbidden to public after September 11 2001. 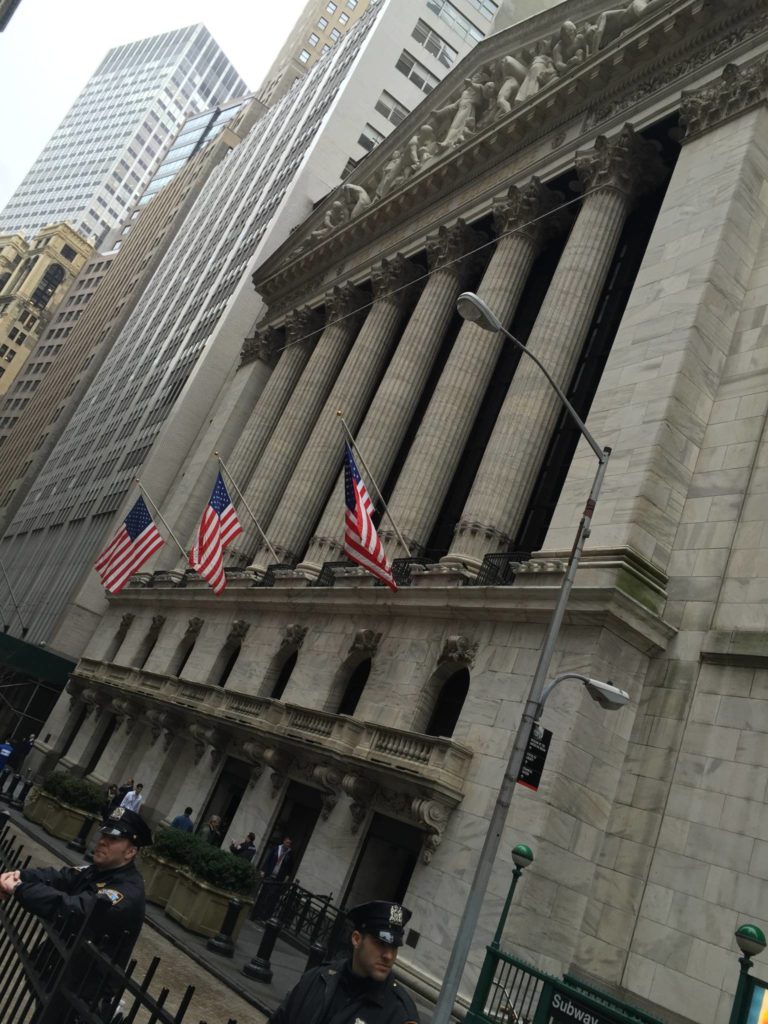 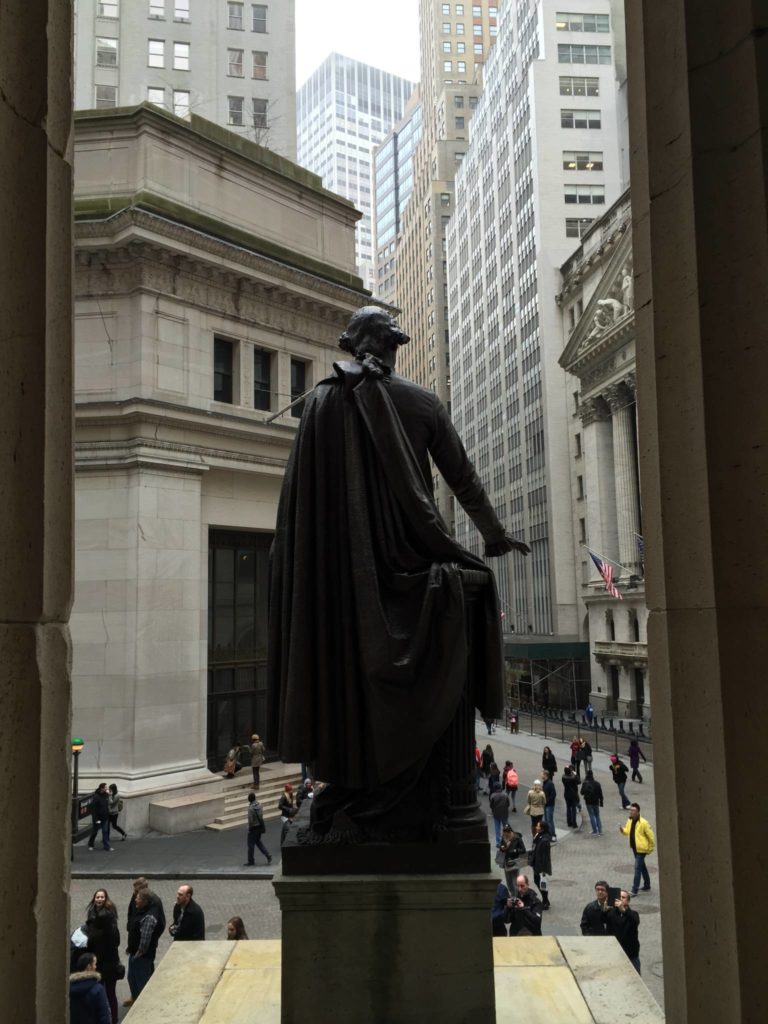 People often sit on the marble stairs to observe the Stock Exchange, the tourist stream and to take photos without know the great George Washington statue on the entrance stairs marks the exact point where Washington himself took the oath as the first President of the United States in April 30th 1789. 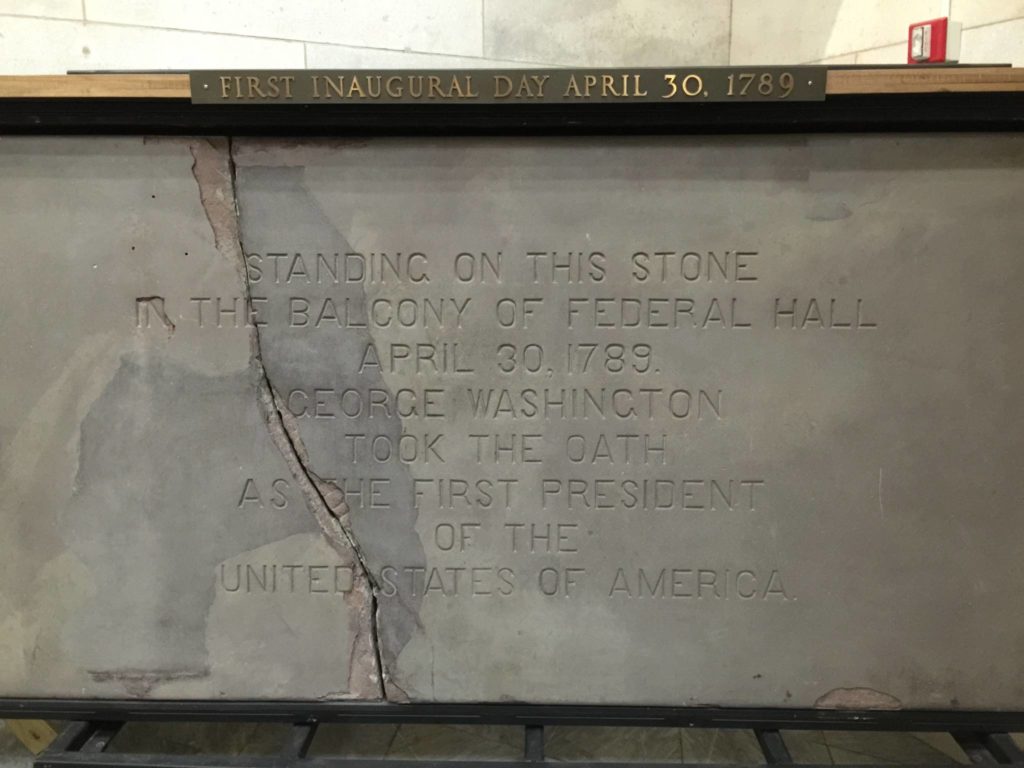 Unusual New York: Federal Hall National monument. The stone which Washington took the oath on as the first president of the United States

The entire building, the first real White House of the history, can be visited free.

Inside it, besides a Visitor Center and a little photographic expo about the history of New York, there is the faithful reconstruction of the first presidential “oval room” (the first building was pulled down in 1800 to leave space to that actual stone and marble one) with desk, original furniture and historic Bible which today the presidents take the oath on in the Inauguration Day in Washington DC. 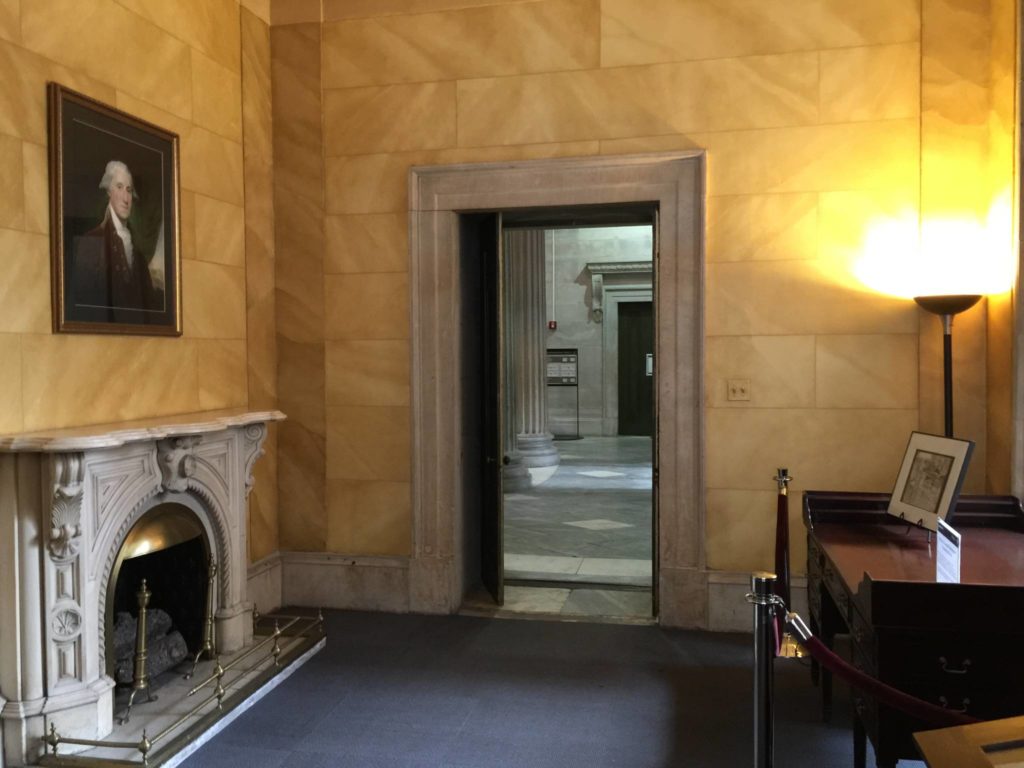 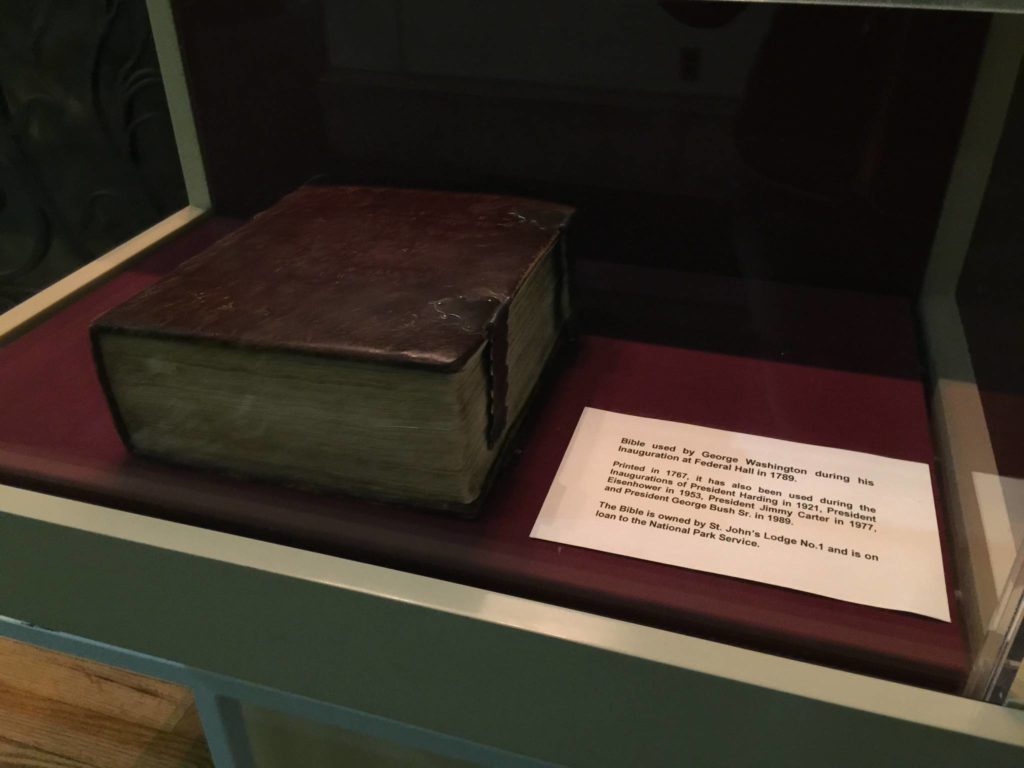 Unusual New York: Federal Hall National Monument, the Holy Bible which the Presidents take the oath on at the beginning of the mandate

Going back on the Broadway, after few hundreds meters you’ll run into the Trinity Church. 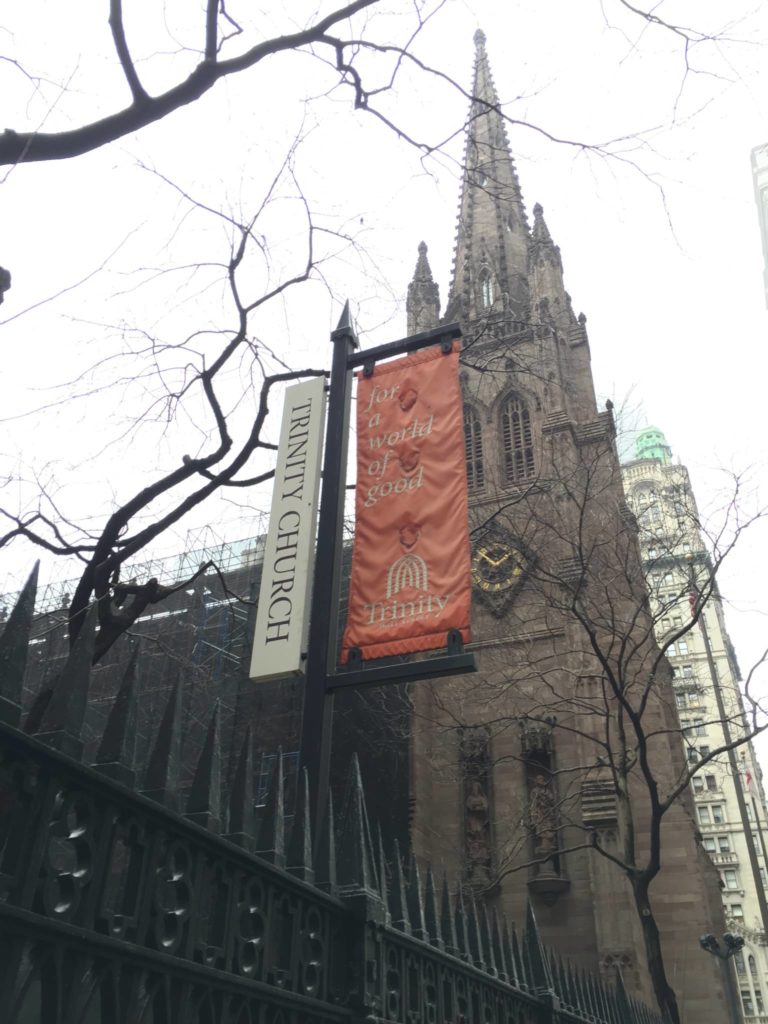 This church, the third one in order of time to arise on this holy soil, is a very important historic and religious site. It’s the third most ancient Anglican church in the United States: the first building was built towards the end of the 1600s and until 1860 its bell tower kept the record of the highest building in the whole city.

From time immemorial it’s the meeting point of the Anglican community. The Trinity Church keeps in its near cemetery – a real sight in the middle of the Lower Manhattan skyscrapers – some of the most famous and influent characters of the New Yorker history.

Like Alexander Hamilton’s grave, one of the Founder Fathers of the American Constitution, the only non-president to be on a common bill, the $10 one. 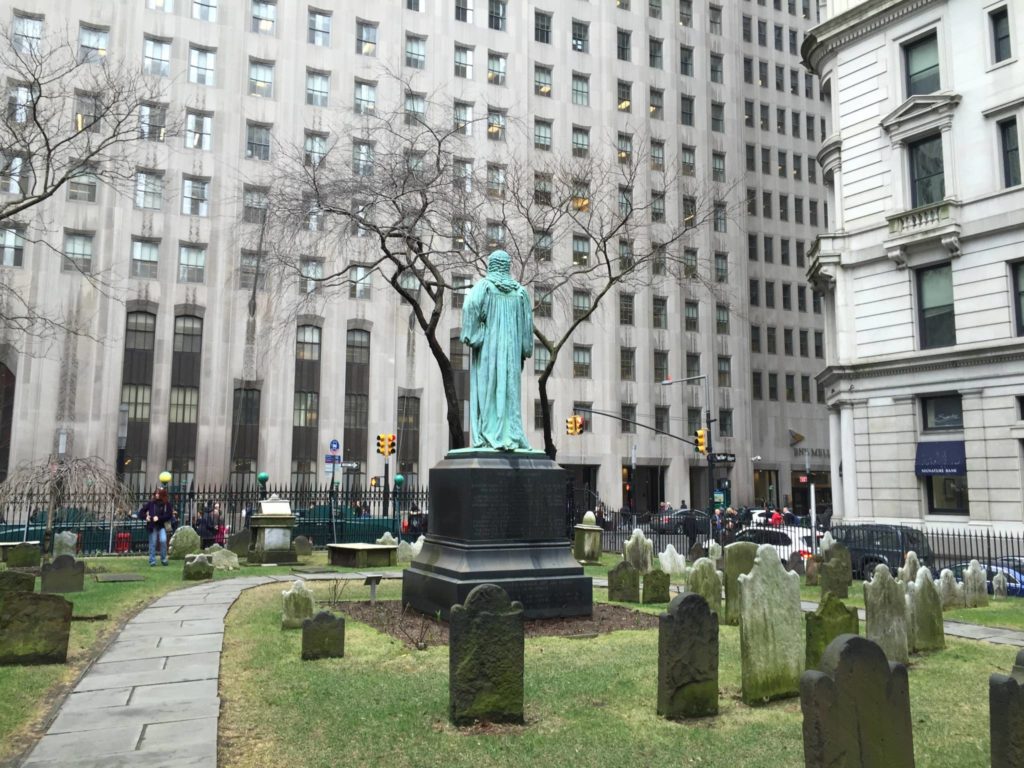 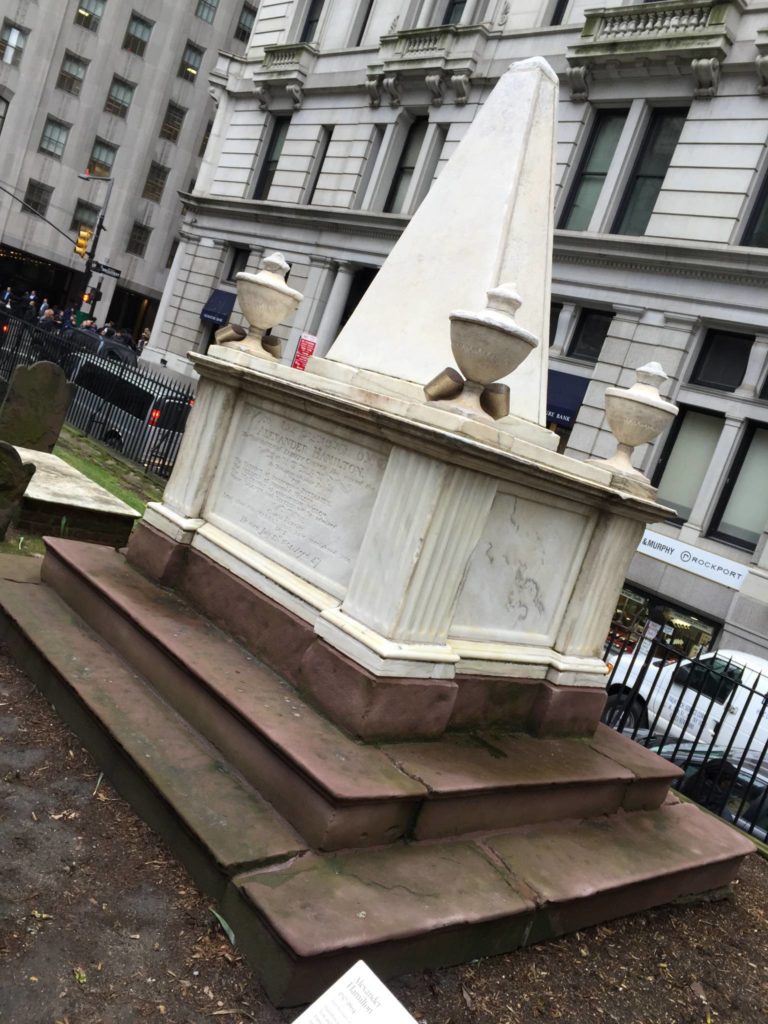 Listening to the tales of some old keeper, it seems his spirit flutters between his home in North Harlem and this cemetery, seeking peace. His story, full of mystery and tragic events, can be found in the paragraphs 5 and 6 of the New York Ghost Stories eBook.

Going southwards, immediately after the Charging Bull, the great bronze Bull I mentioned before, you’ll run into the Bowling Green Park, a little fenced park with inside benches and cared flowerbeds: nothing special apparently except for its particular history and for a little tombstone located to the south-east, very important above all for Italian people. 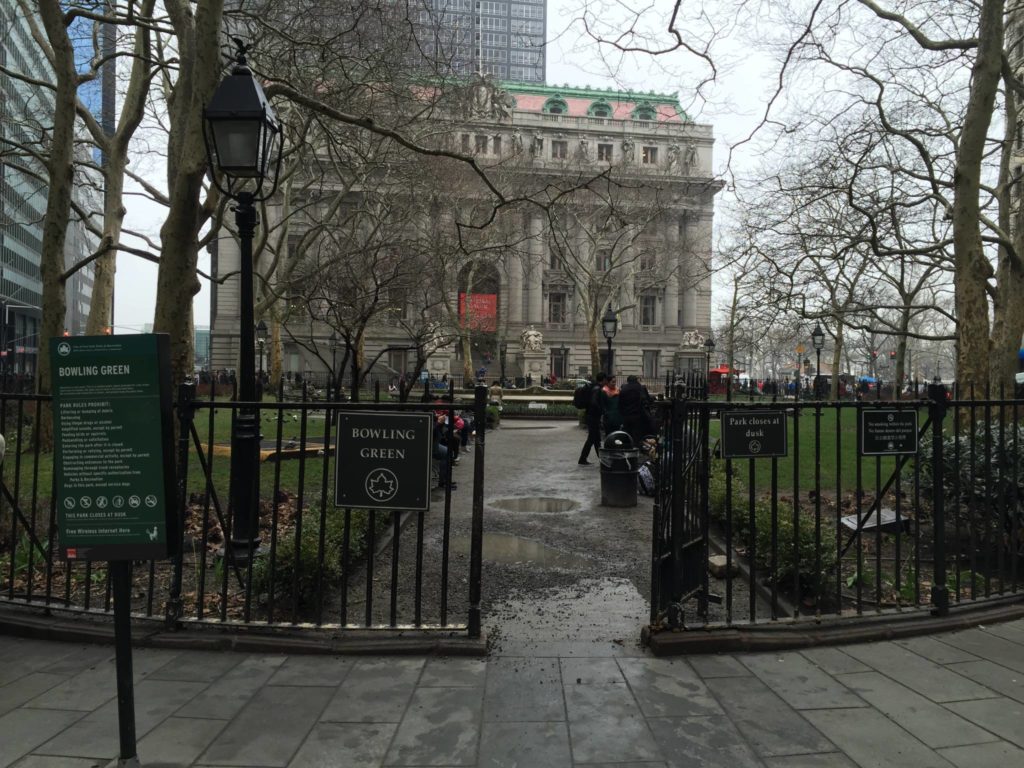 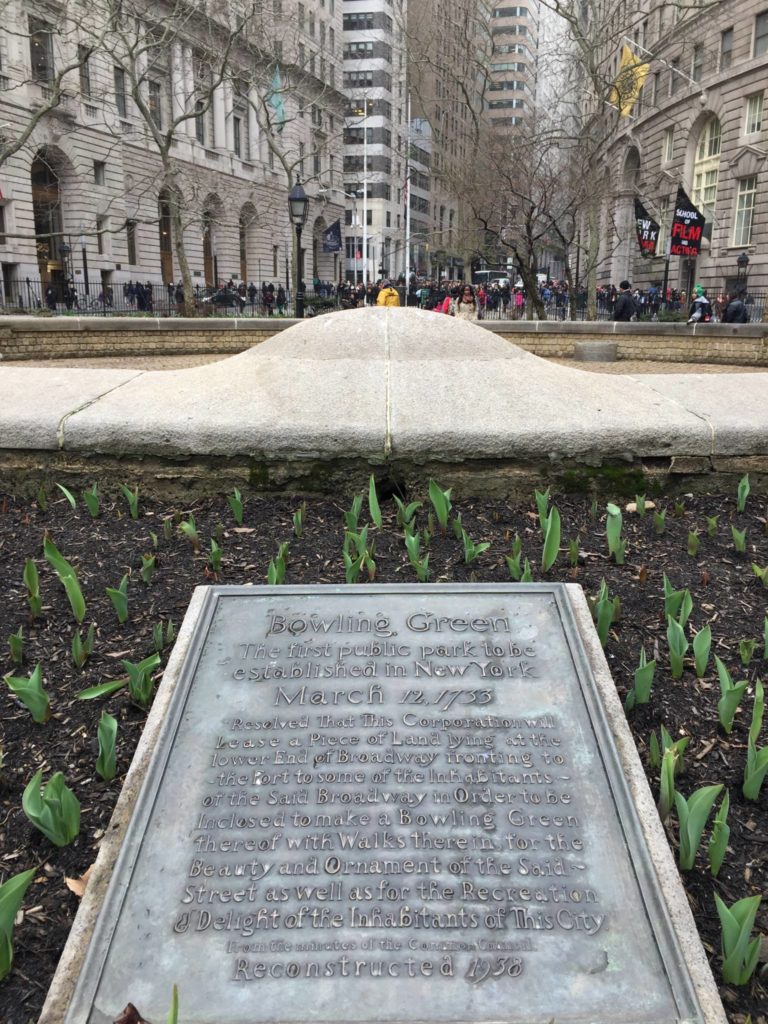 It looks like this little triangle of land corresponds to the most ancient New Yorker soil.

Its history tells that right in this area, in the first half of the 1600s, the Dutch Peter Minuit bought from Native Indians, for about $30, the Manhattan Island. And it was here that one among the most bitter revolts against English people towards the end of 1700 started.

One of the most curios details of the park is the tombstone commemorating the passage of Pietro Cesare Alberti, a Venetian seaman landing here, first Italian in America, on June 2nd 1635.

It is so famous and celebrated by Americans (as well unknown for Italian people) that it has even a national day, just on June 2nd , the Alberti Day with parade and celebrations on the occasion. 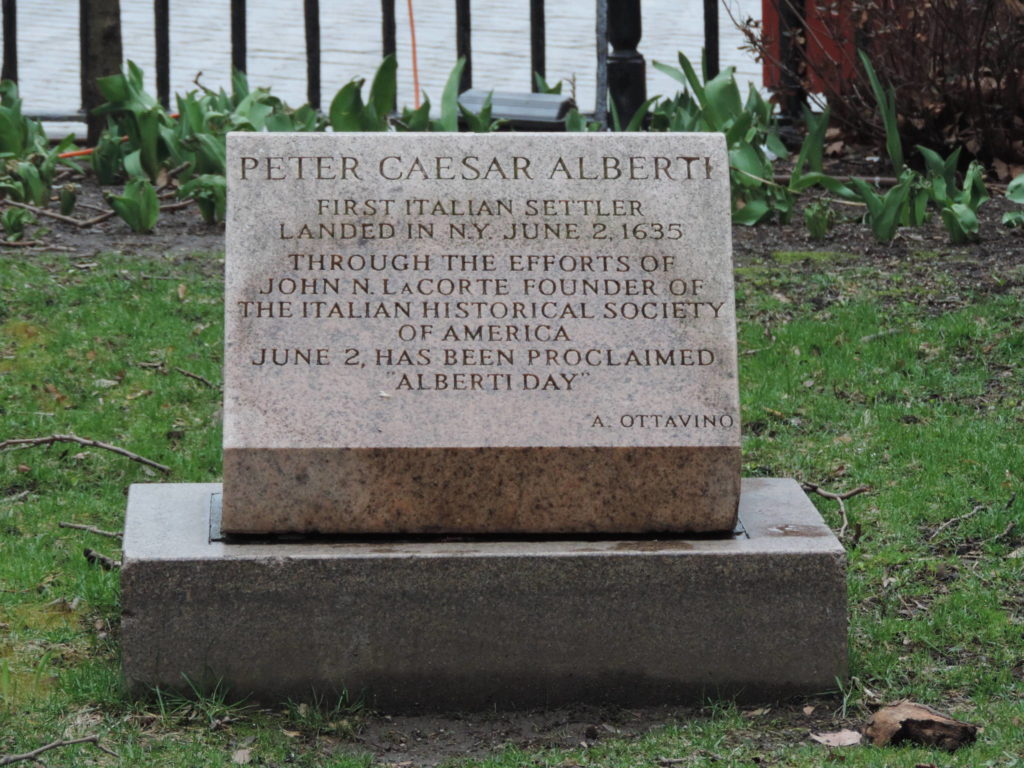 Keep going towards Battery Park, once reached Pearl Street, set in a series of historic buildings among the Lower Manhattan skyscrapers, you’ll run into the Fraunces Tavern Museum, a very special place. 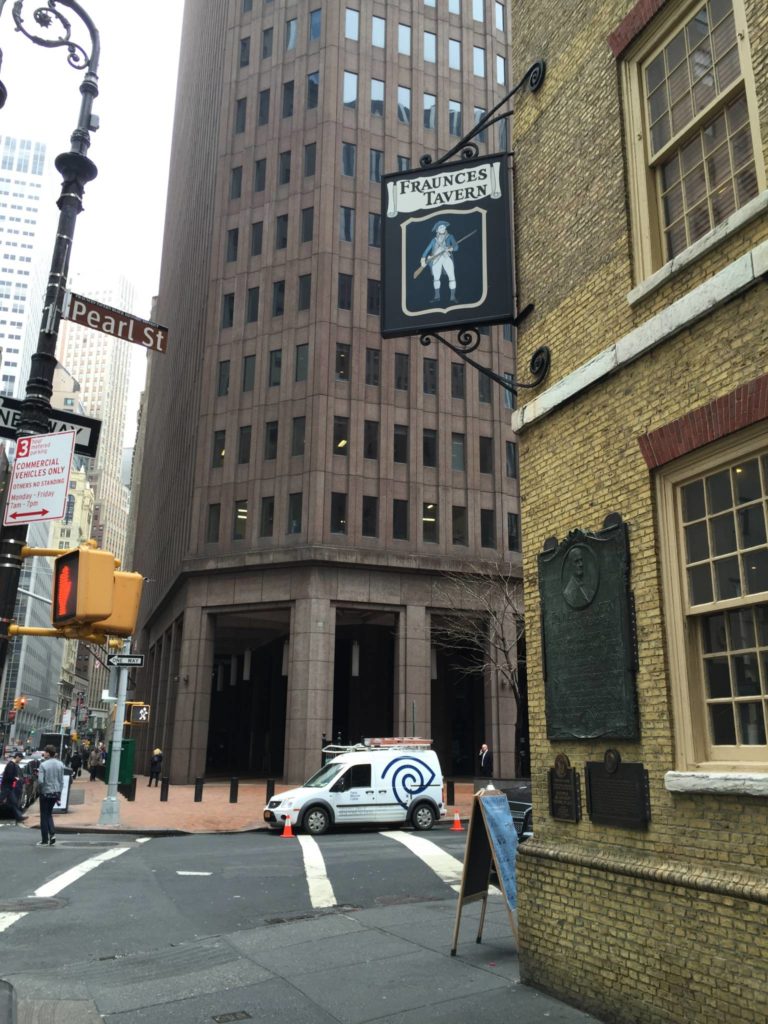 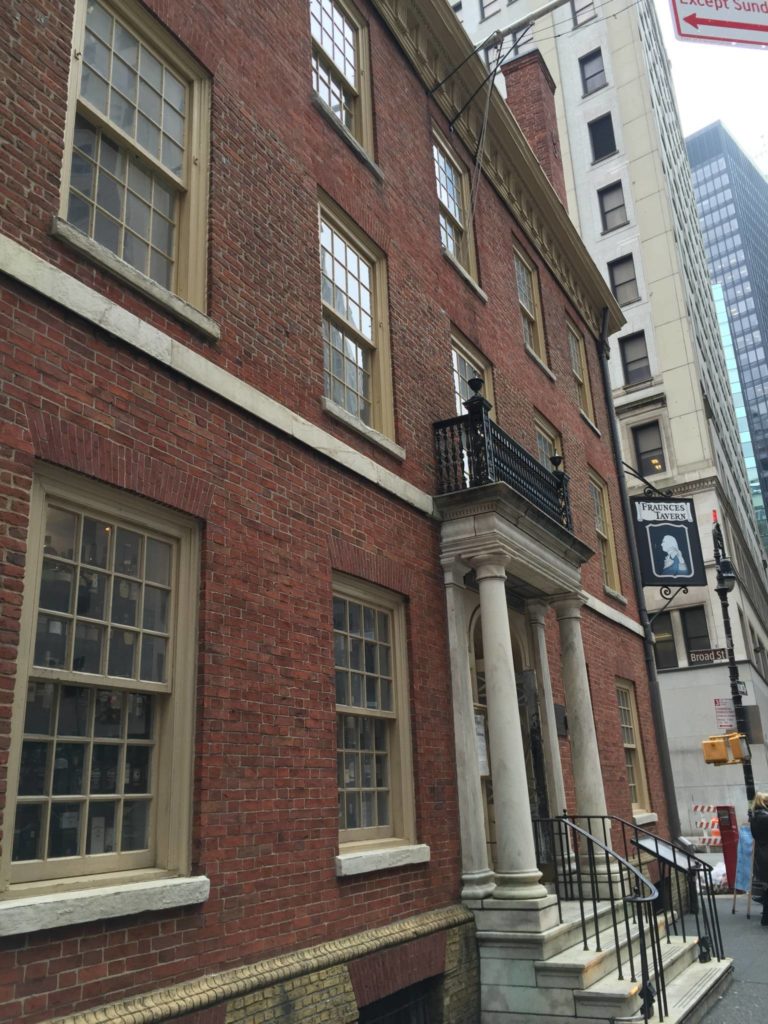 A historic tavern – dating back to the early 1700s – perfectly kept and still working, with adjoining old pub that over centuries had different use destinations.

It was a private dwelling, the location of the George Washington’s celebrations for the victory in the Independence War (the room at the second floor commemorates the event) and the seat of a few ministries of the President himself.

Today the building is considered protected historic place: from the first floor you reach the very crowded tavern and the pub with its special beers’ selection, while from the third floor you enter the museum with its historic rooms.

The tour is highly recommended, even only to stop drinking something at the pub’s bar: here you’ll “breath” the history and the old New York atmosphere is really unique. 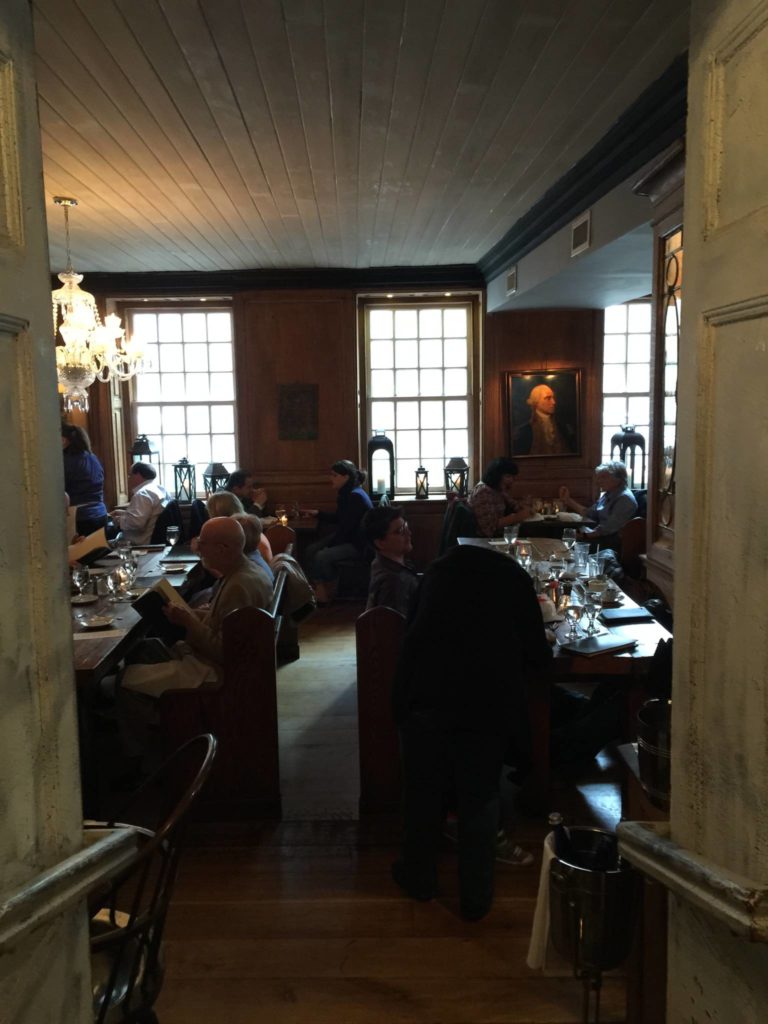 It’s the house dating back to the 1800s, today place of veneration, of Elisabeth Ann Steton, the first American woman to be proclaimed saint, among other things founder of the Sisters of Charity Order.

The church deserves a quick tour, both for the position and the insides: it is worth it to stop for a few minutes to enjoy this little oasis of peace in the middle of the chaos of Lower Manhattan. 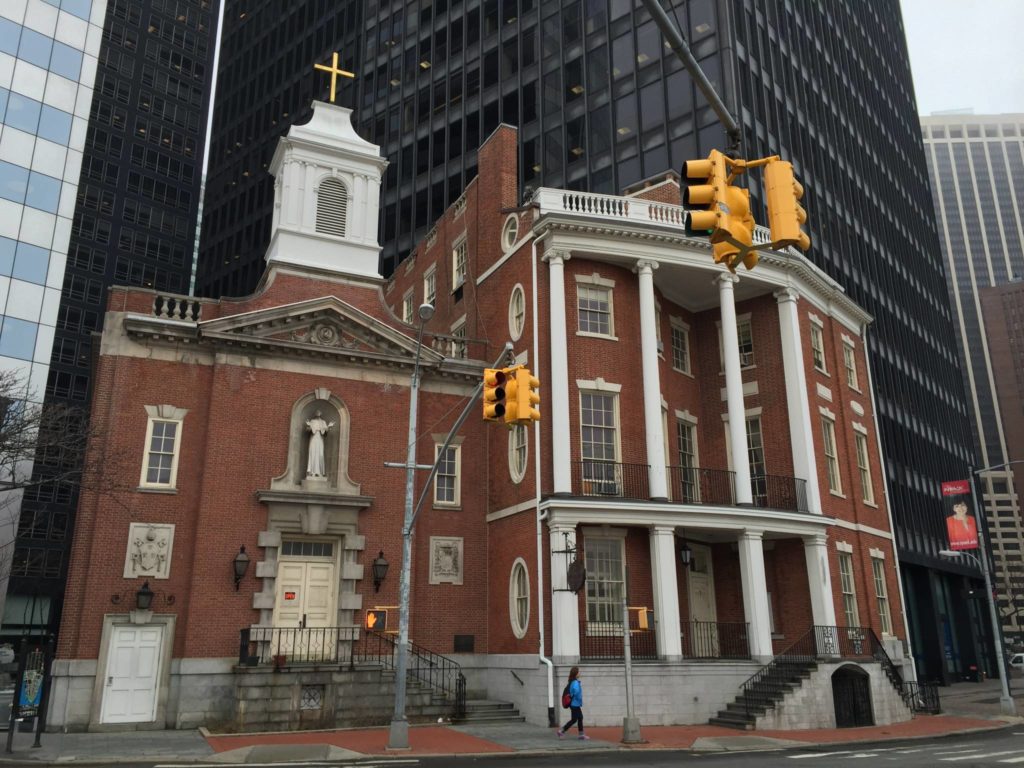 From here you can go on to the Battery Park landing stage to reach the Statue of Liberty and Staten Island or go on foot towards the South Ferry subway to go back to Midtown. 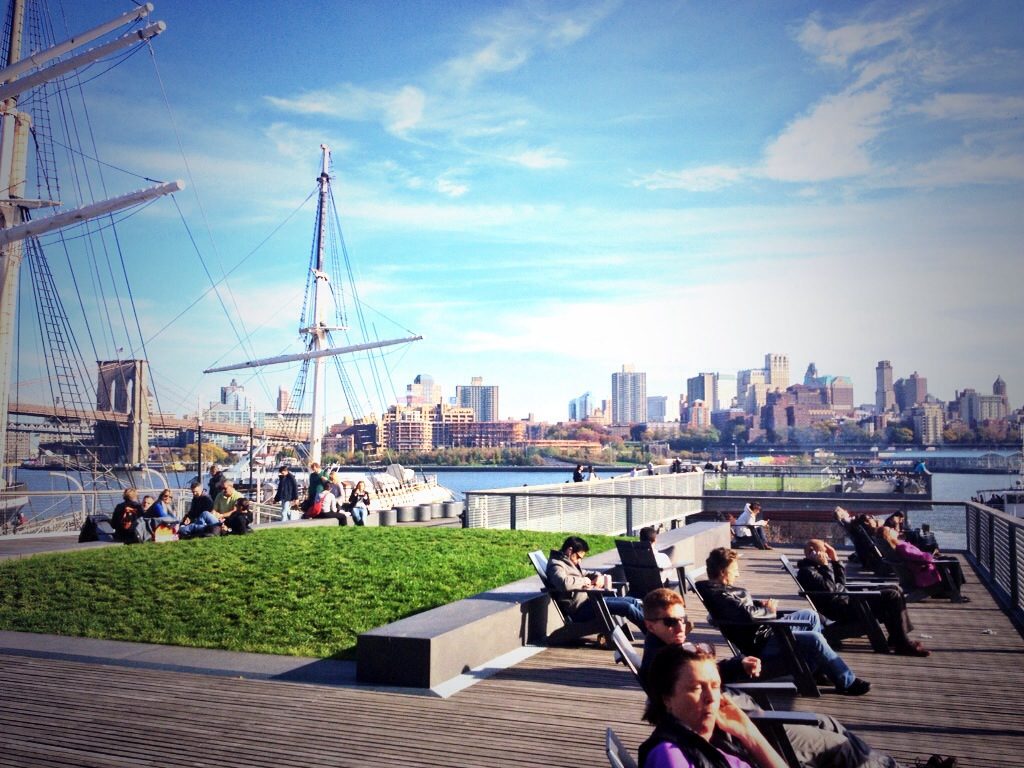 Or keep going towards the South Street Seaport to relax on the benches of its wonderful terrace, giving amazing views (and photos) of the East River and the Brooklyn Promenade.

Maybe after have bought some snacks at the several food trucks that stay near Fulton Street every day.