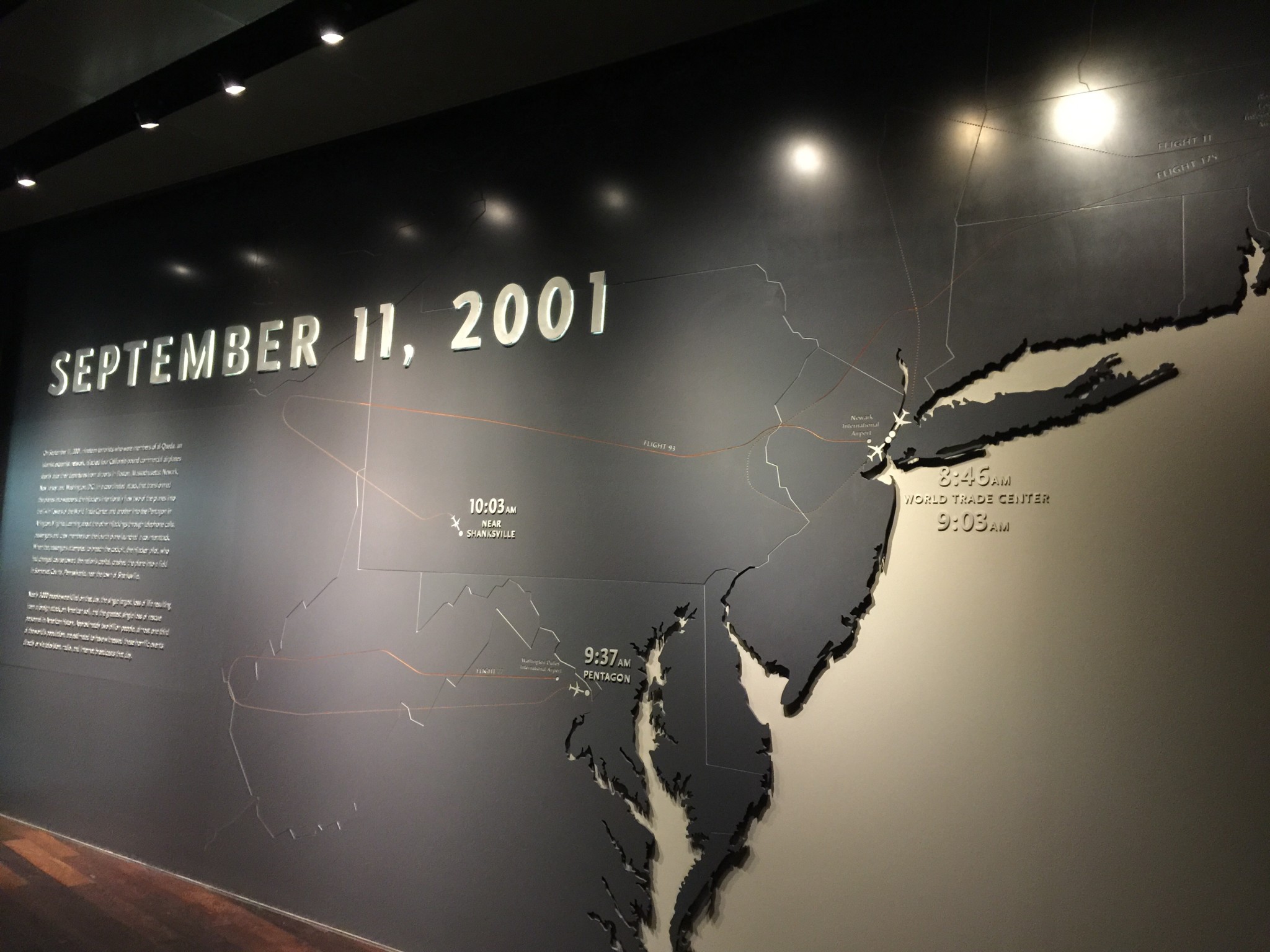 It isn’t anymore that huge black chasm that 14 years ago swallowed up people, buildings and hope, leaving the whole city enveloped by a cloud of white smoke, pain and distress. 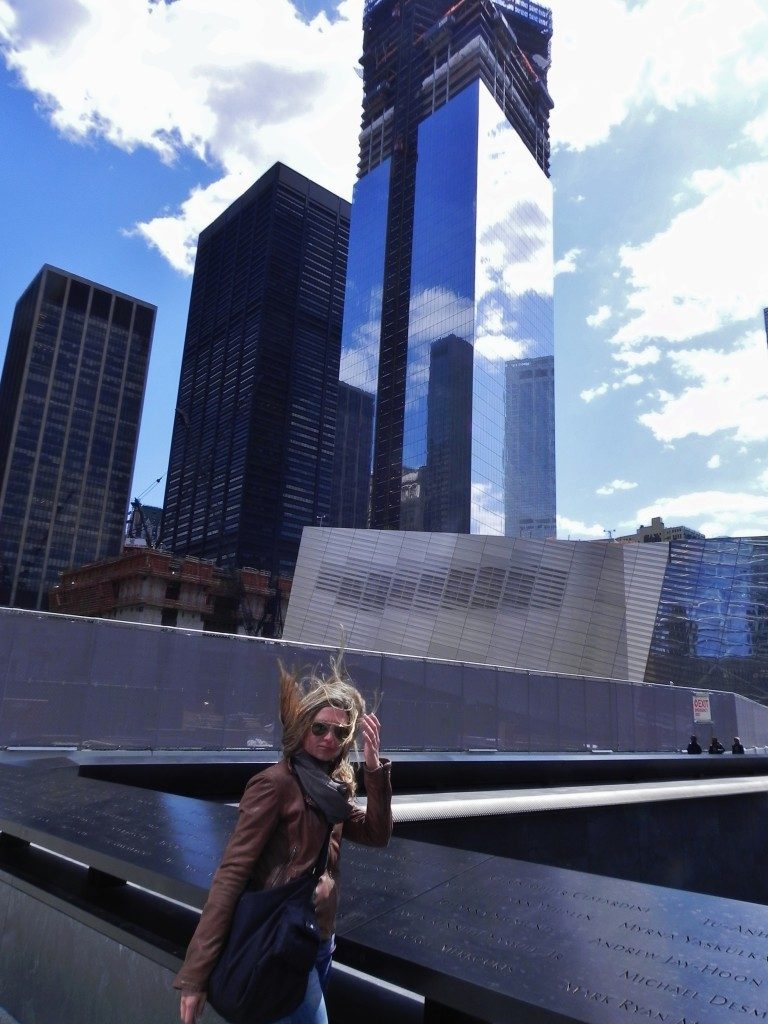 Little by little the cranes and the yards left space to new and surprising buildings: first among all the One World Trade Center, known as Freedom Tower, today the highest skyscraper in the Western Hemisphere (the third one in the world) that with its 1776 feet (without mention the aerial) recalls patriotically (and it couldn’t be different) the year of the United States of America Independence declaration birth.

There’s light at last, a lot of light and the noise isn’t anymore the pneumatic hammer’s measured one but the buzzing, colored and variegate, of the commuters crowd resuming its back and forth towards the offices of the near Financial District and of the maps and tours sellers of Lower Manhattan, Staten and Liberty Island. 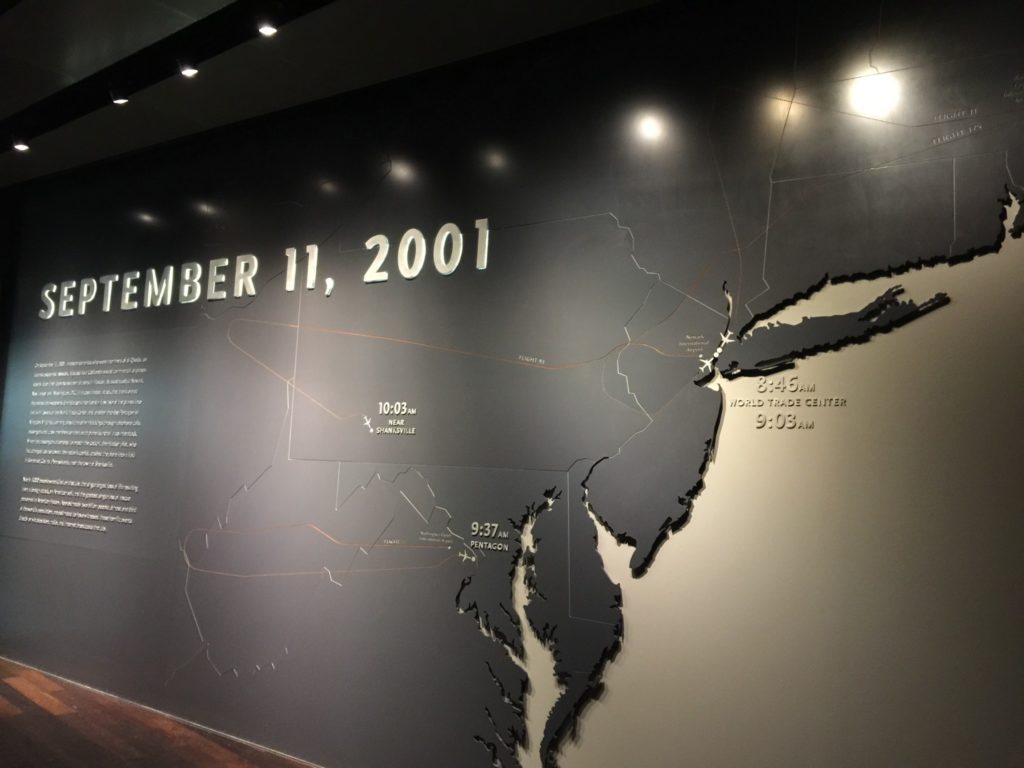 The hotels and the department stores shine of luxurious and captivating windows and the old subway of the World Trade Center slowly comes back to normality, more beautiful and modern than ever…try to think about a white bird opening its wings… here it is, this is the impression I have every time passing by Ground Zero and I turn the look towards that strange construction taking shape more and more quick. 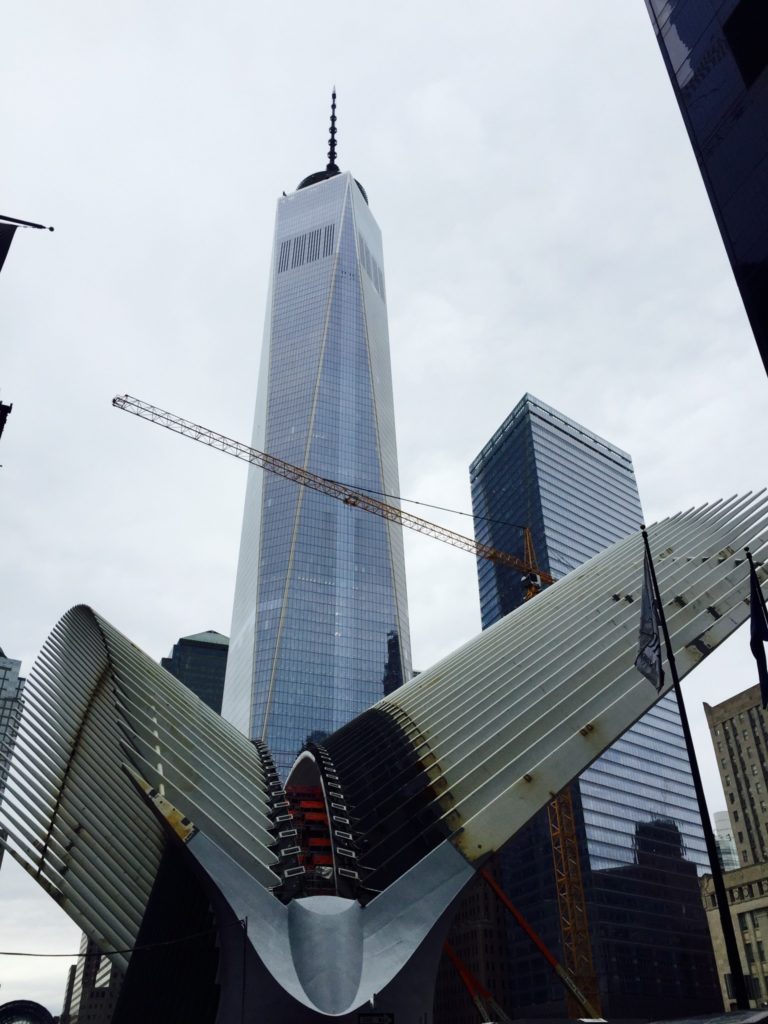 Visit the 9/11 Memorial Museum: the Freedom Tower and the innovative entrance of the new subway station.

Life goes on stranger, more courageous and confident than ever. It looks like if that past is a remote past, more and more impalpable, by now.

And perhaps to the eyes of young visitors is just like that, since they have only the memory of a filmed sequence seen in a flash on TV during an anniversary about that terrible day.

And yet the New Yorkers (and the entire world for some reasons) don’t forget. I think they couldn’t do it, even if they wanted to.

What to see into 9/11 Memorial

Gone past the last still working yard in Ground Zero, on the right a wide outdoor space appears, an oasis of peace of even 6 hectares in the heart of one among the busiest areas of the city.

There’s the Memorial Plaza with its 450 trees symbolizing the rebirth, there are the two big granite pools redrawing the perimeter of the Twin Towers and on the edge the names of the September 11th 2983 victims are engraved (the towers, the flights, the Pentagon, the rescuers and of the first attack in 1993). And in the end between the Freedom Tower and the North Pool there’s a strange silver color geometric construction: the National September 11 Memorial Museum, opened in May 2014. 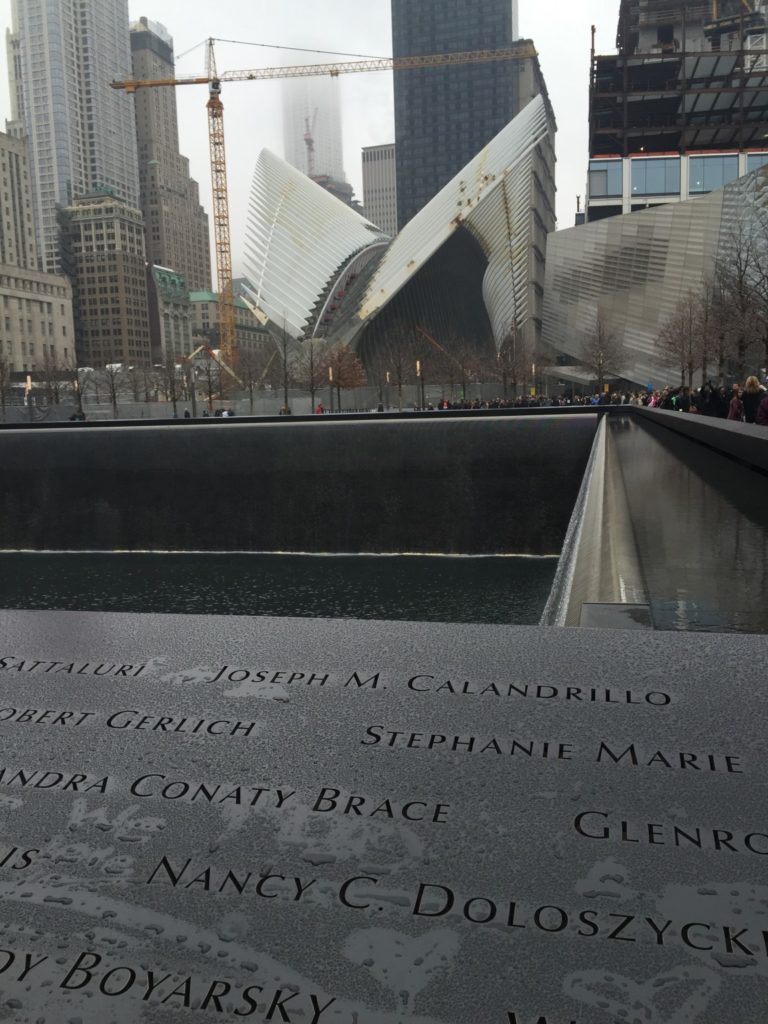 Visit the 9/11 Memorial Museum: the Memorial Plaza, the North Pool

A 4D museum, planned by a pool of Norwegian architects, that actually acts as a time capsule. 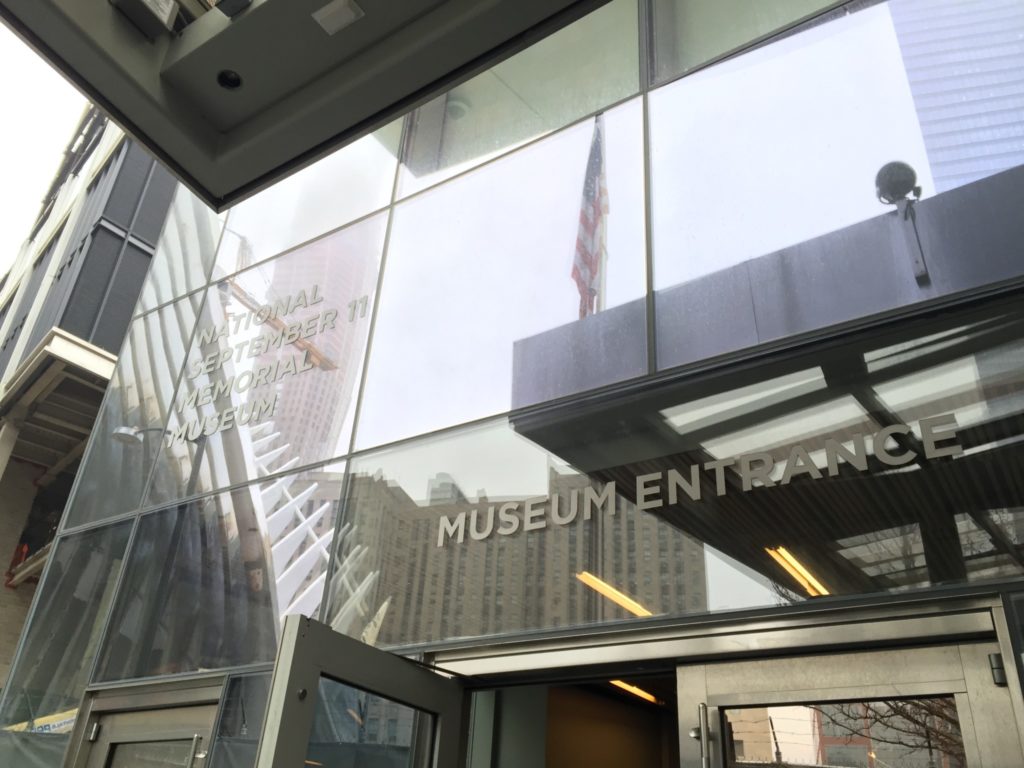 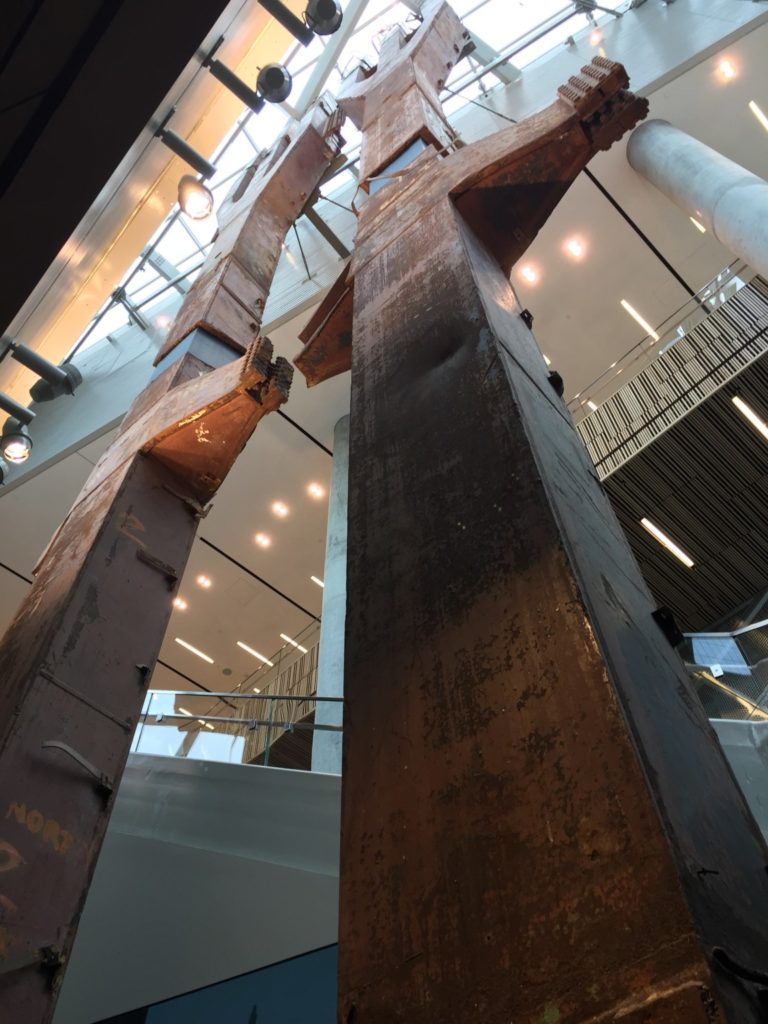 Visit the 9/11 Memorial Museum, the inside

Once entered, it looks like you are catapulted suddenly into that horrible day, among the tourists crowding the ferries to the Statue of Liberty (then they we’ll be the first ones to see and shoot the arrival of the planes), the passengers and the Islamic terrorists waiting for the flights of death, the unaware people that peacefully go to work to the Twin Towers’ offices.

In the middle of all this there’s an incredible emotional path made of images, audio and video files, objects, faces and sounds.

It’s difficult, even impossible, to explain by words the evocative power of this place.

The entire building is 21 meters under the footfalls story, intentionally absorbed by the North Tower foundations, those ones of the bathtub, the containment wall of the Hudson River that miraculously was able to not given up following the towers’ collapse, and the area in front of the South Tower perimeter’s ones. 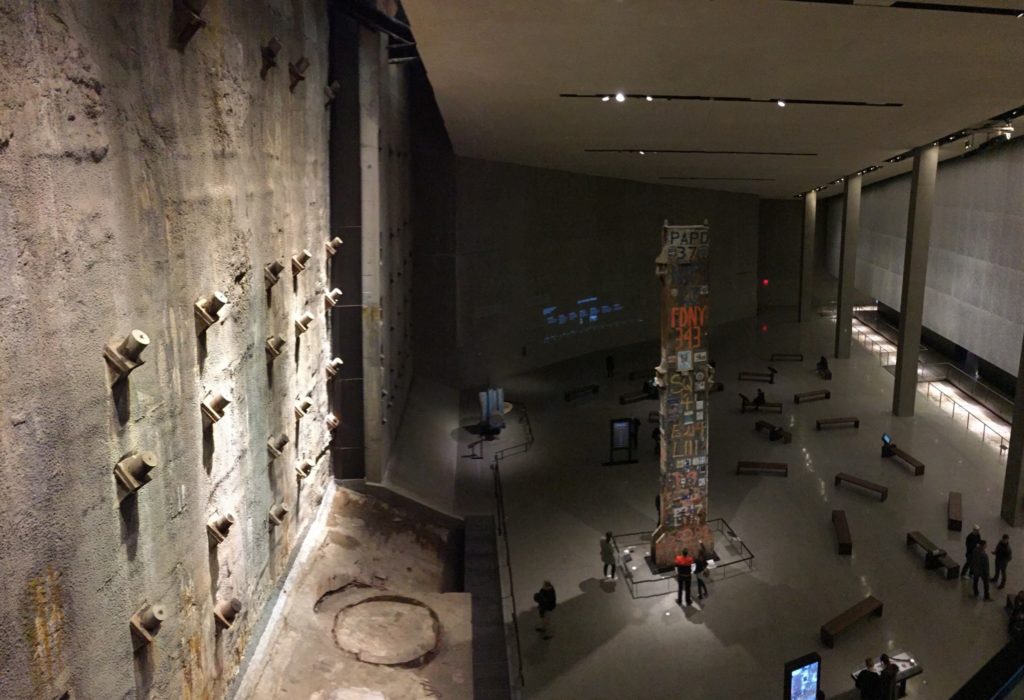 Practically the epicenter of the horror, including voluntarily the Foundation Hall, the base of the North Tower, some warped parts of the two skyscrapers’ structure, included the last beam removed in 2002 and the remains of the police and firemen’s vehicles used during the first aids. 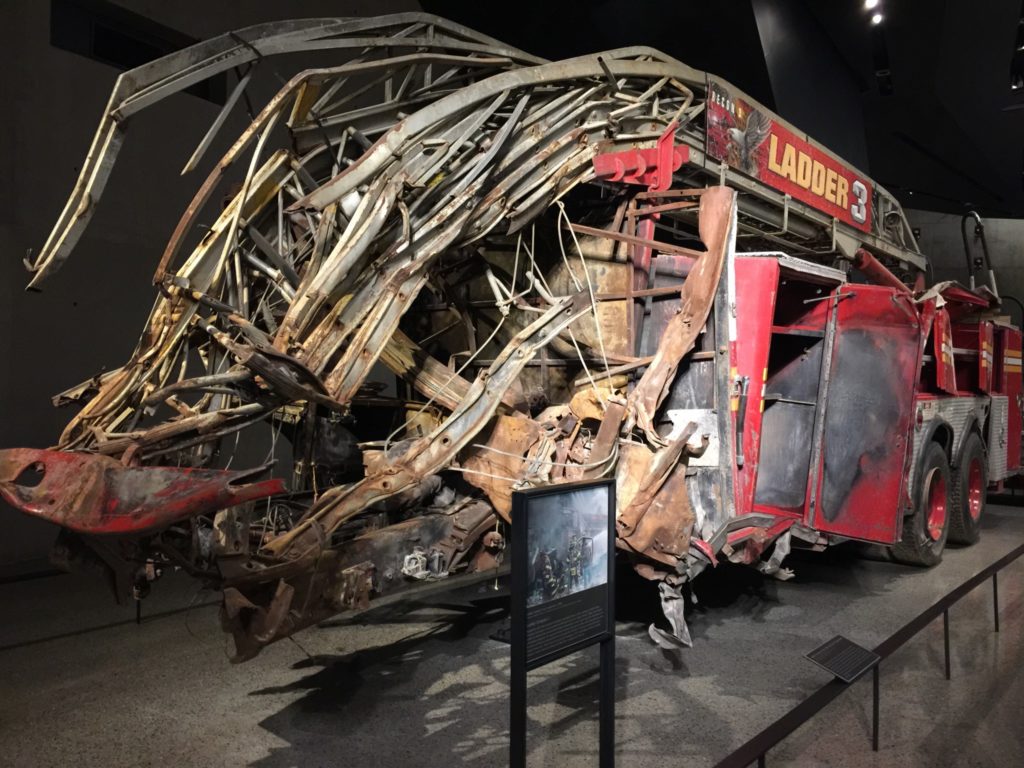 Visit the 9/ 11 Memorial Museum: what remains of the NY Firemen Ladder Company 3 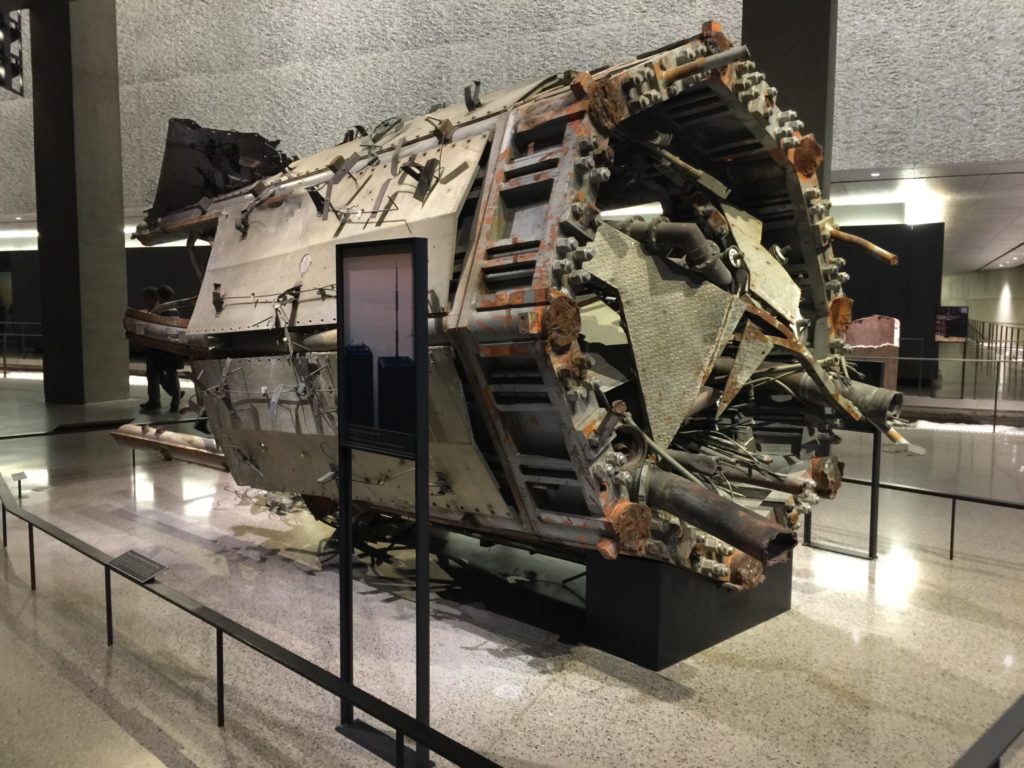 Visit the 9/ 11 Memorial Museum: what remains of one of the Twin Towers’ aerial

Little far there’s the Historical Exhibition, where it’s forbidden to shoot and take photograph: it’s the place dedicated to the memory and the reflexion.

Here are kept all the fragments recovered from the planes used for the attacks and the personal effects found among the rubbles, huge cement heaps, electric cables and beams where it was not possible to check the presence of human remains, considering the thickness and the solidity. 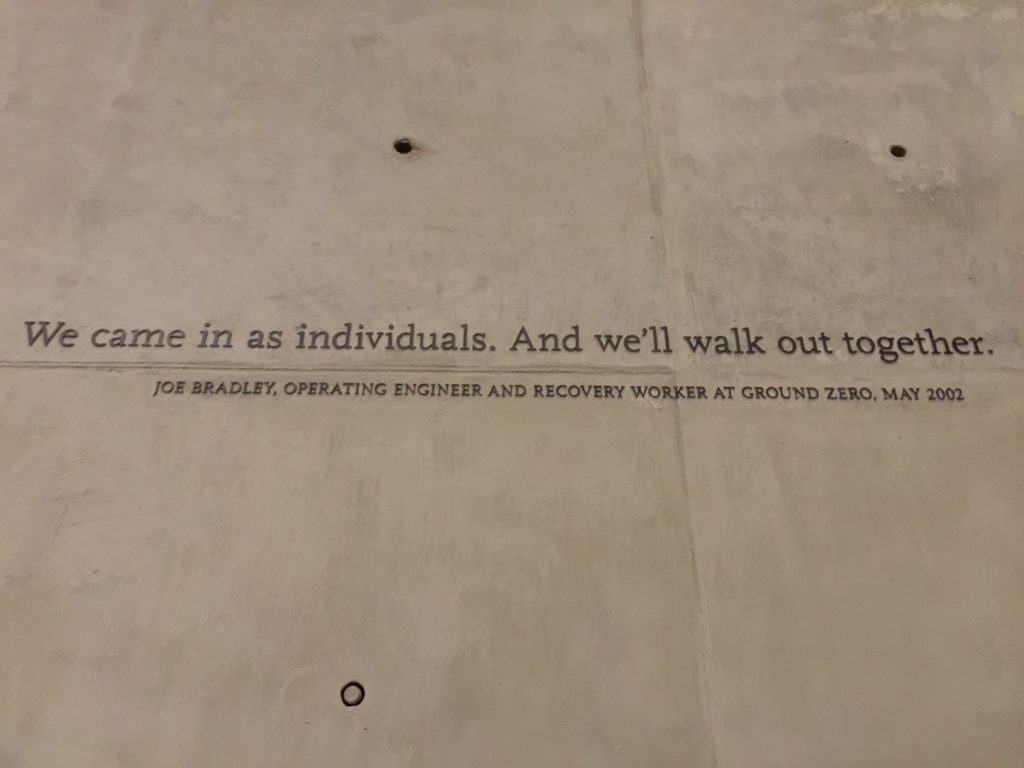 Here you can see and listen to the horror

In the ungeared and never-seen-before videos of who was terror-struck and threw from the burning towers, in the voices of the passengers’ calls of the skyjacked flights, in the farewell messages recorded in the answering machine of the dear ones.

Here you can relive minute by minute, through a detailed reconstruction, all the events happened in that day: the route of the planes then crashed into the towers, the United 93 flight heroically deviated by its passengers and fallen before to arrive to the White House and the flight on the Pentagon. 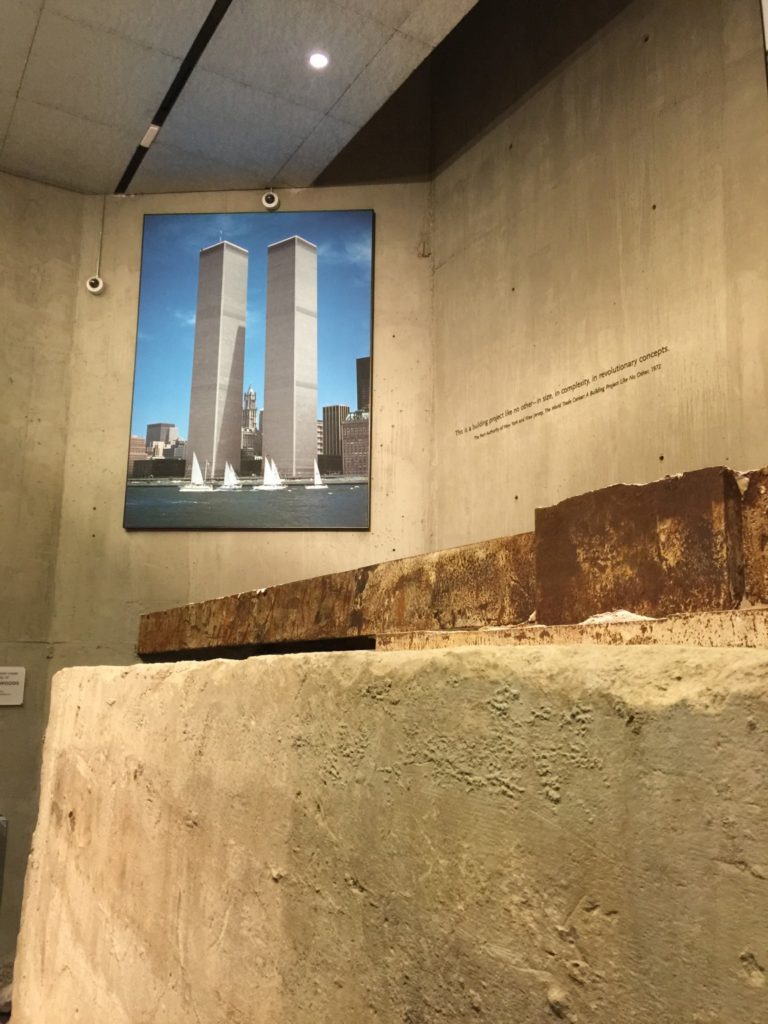 Into the foundations of the South Tower

Here you can listen to, see and read everything: interviews, imagines never seen before, all sorts of conspiracy theories, accusations, suspects, illations.

Everything is reported and treated like in a big horror anthology. Nothing is left out, neither the final conclusions and the sums about how not only the United States but the whole world have changed from September 11 2001.

In the Memoriam expo, where it’s possible to trace the story and the identity of each victim, and the audio rooms to witness the time-lapse of the Ground Zero reconstructions close the expo space.

The Virgilio’s phrase quoted in capital letters in the area which opens and closes the expo, says:

“No day shall erase you from the memory of time”

The wound will be always open, the memory never will fail but life has to go on, strong of a new awareness. 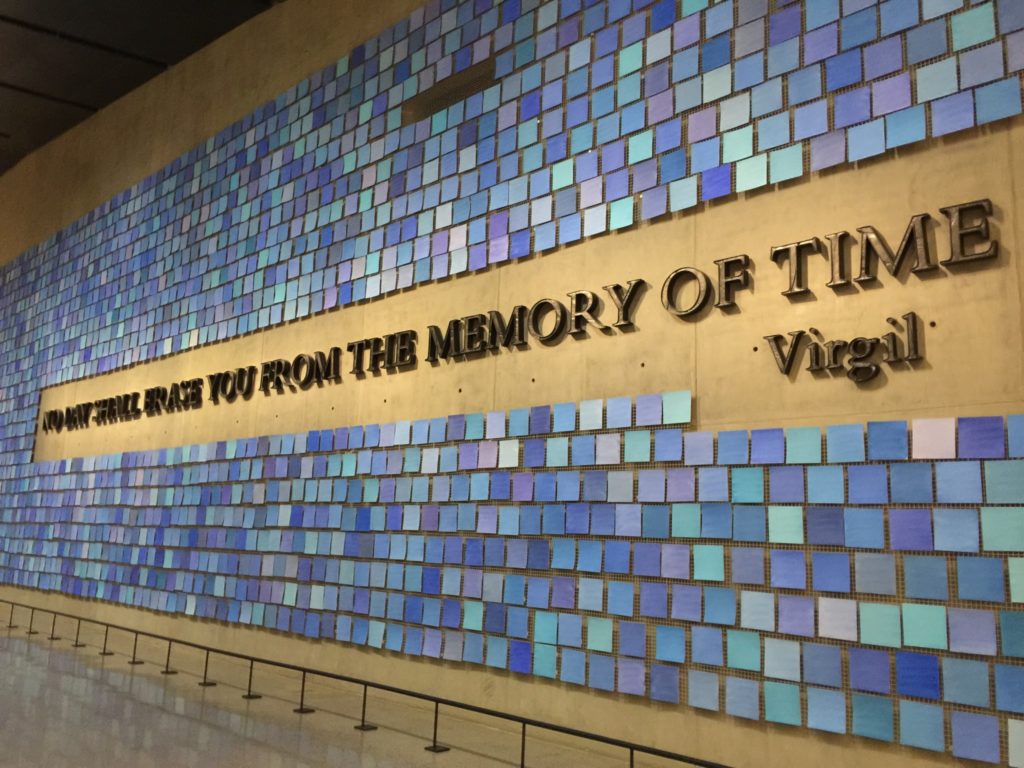 No day shall erase you from the memory of time

An intense and exhausting tour, as emotionally as physically: reckon at least 3-4 hours.

An experience to recommend everyone: to whom don’t forget, to whom wants to know more, to whom isn’t able to understand the meaning, to whom remains in the doubt, to whom that day on September 11 2001 wasn’t born, yet, or to whom was too little to understand. 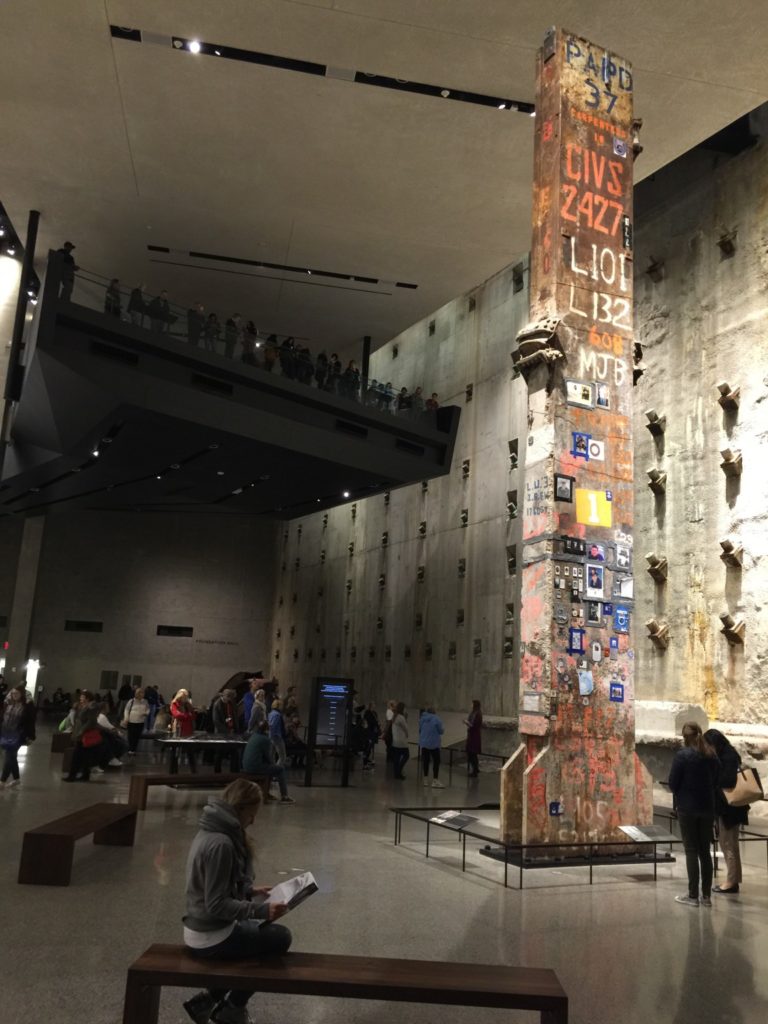 Here you find each necessary info as regards prices, on line bookings and the eventual presences at group tours with firemen, specialized guides and policemen.

The nearest subway to reach the memorial area is the Fulton St. one.