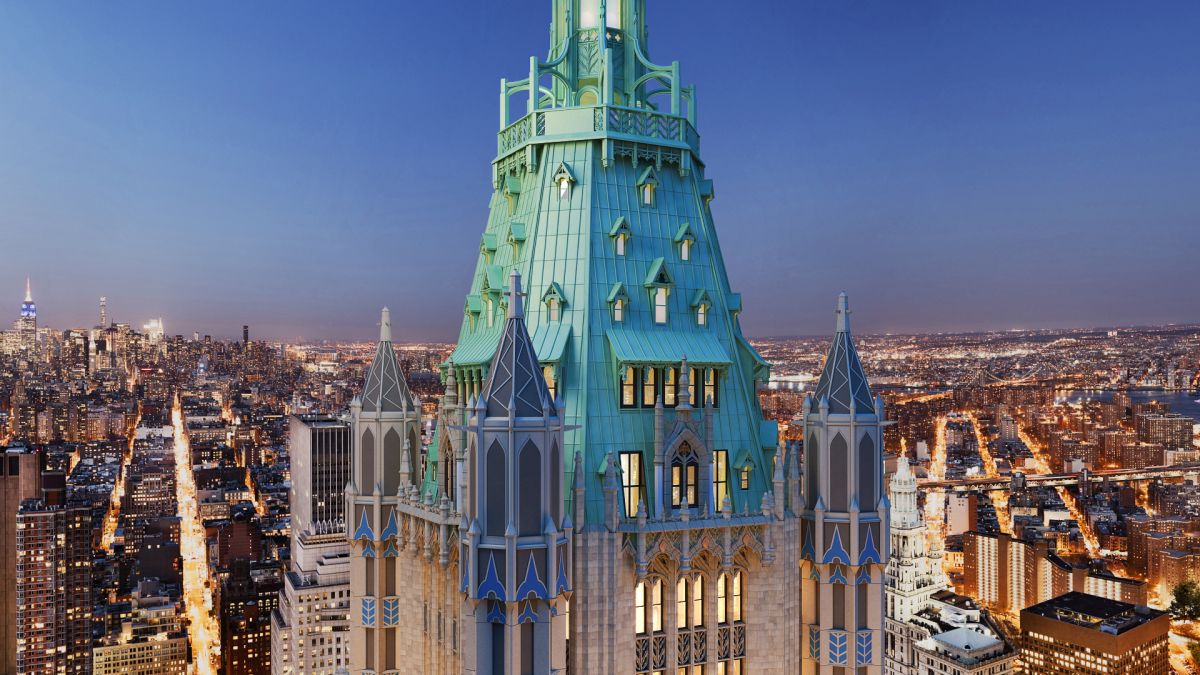 The historical places in New York.

Space-time portals to go through in order to rediscover the city in its past eras and find oneself next to men, women and great characters of the past listening to the tales and the crazy and visionary ideas about what would have been “their” future New York.

A different, captivating and unusual way to explore and know even more deeply NYC.

Like the Woolworth Building, one of the most precious, fascinating and important historical buildings in Lower Manhattan. 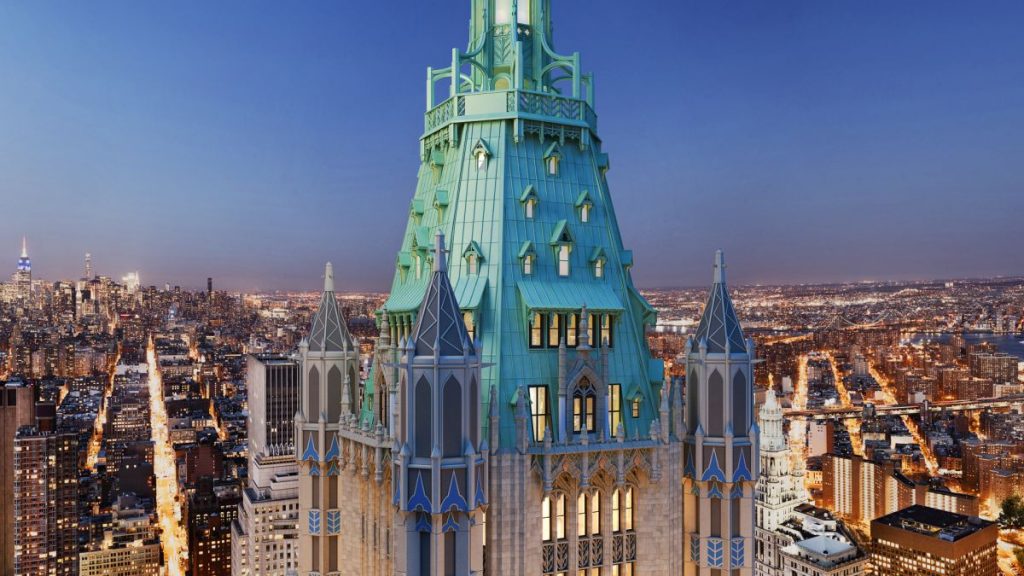 Historical places in New York: when Lower Manhattan was the heart of the known world

I talk about a period – between two centuries – when Lower Manhattan (and not Midtown) was really considered the heart of the world.

About that one between the end of the 1800s and the beginning of the 1900s which represented the heart and the soul of the commercial, financial, government buildings and those ones of the major newspapers in whole the United States.

About the first fascinating building hosting the New York Times, about the majestic City Hall, Wall Street, the Federal Hall – the first “White House” of the history – about the Federal Reserve’s golden bars. And even about the great architects, the art deco, the barons, the collectors. And about the first runs by subway of the New Yorker high society, from that one told very well in “The Age of Innocence” as far as the “Titanic” one – in part literally sunk.

And then the wonderful and huge Woolworth Building which from 1913 had kept for even 17 years the record of the highest building in the world, even much before the Empire State Building.

A blaze of Gothic and Romanic art and avant-garde engineering. 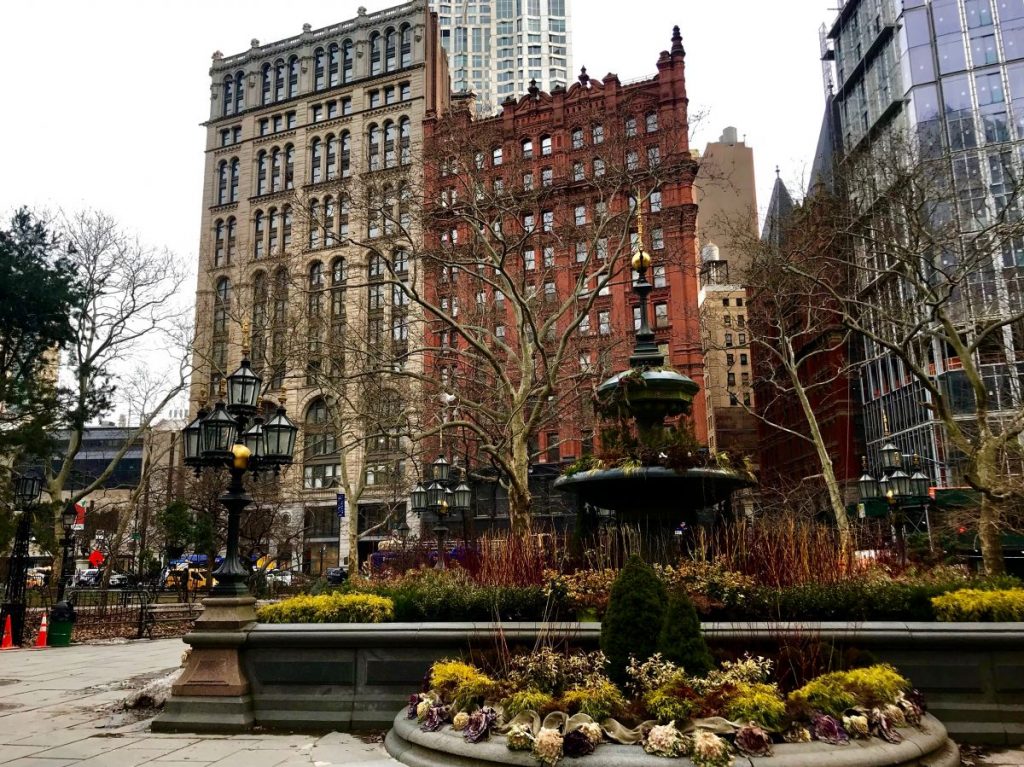 Historical places in New York: tales and anecdotes of the Woolworth Building

When the Woolworth Building was completed – and opened with a stunning show of lights and sounds – in 1913, it became in all respects the highest and most technological skyscraper in the world.

A wonderful building for that time, praised by newspapers and the citizens themselves for its gothic profile, its amazing views from the observatory (unfortunately opened to the public only until 1941, defined “one among the most wonderful viewpoints of Lower Manhattan” by critics). And above all for its huge central tower with sharp syncopated vertical axis which recalled the dynamism of the modern New York, viscerally tied to its past, but unavoidably open to its bright future. 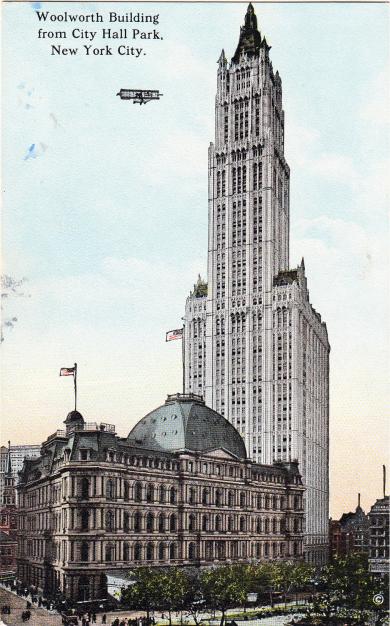 Historical places in New York: The Woolworth Building in a vintage postcard

The upstairs of the building recalled the big European cathedrals while from the main entrance a huge Tudor style portal gave access to a boundless hall recalling a Romanic nave, embellished with Byzantine mosaics, golden frames and murals.

Inside it there’s one of the first galleries dedicated to “self-service” shopping where customers could serve alone without the help of the sales assistants, with restaurants, ultramodern high speed elevators, luxury apartments with machines in order to produce power, heating, cooling, watering and innovative and clever fire-fighting system.

Besides a swimming pool with spa and the record to be the first building in the whole Manhattan to have a direct access to the subway line. 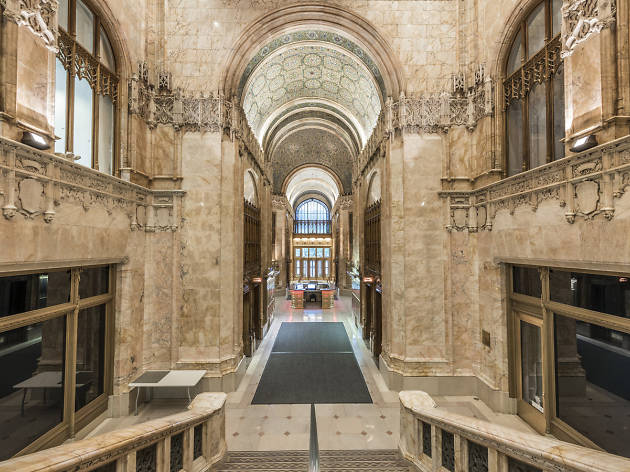 Historical places in New York: the entrance hall of the Woolworth Building

The Woolworth Building was built by one of the most famous architects of that time – Cass Gilbert – on commission of the entrepreneur Frank W. Woolworth, CEO of the FW Woolworth Company and owner of even 318 “Five and Dimes” shops (where everything was sold at five and ten cents) spread among the United States, Canada and England.

According to Frank Woolworth, the new skyscraper – the headquarters of its company – was supposed to be a proper “Cathedral of Trade” for the New Yorkers, eclipsing in height the Singer Tower –recently completed – in order to advertise its brand and its chain of stores throughout the world. 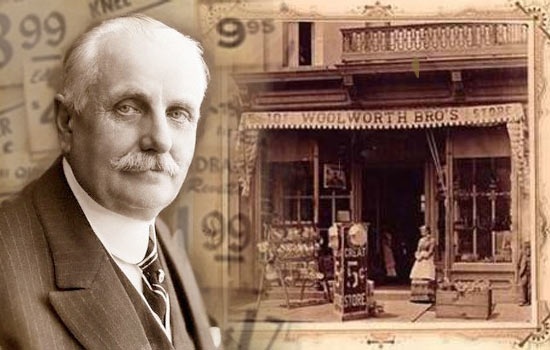 Historical places in New York: Frank W. Woolworth and one of his “Five and Dimes” shops

Due to the construction of the Empire State Building and the Chrysler Building in the 1930s and the progressive interest towards the new buildings in Midtown, the building slowly lost the attention of the New Yorkers until closing all its inside activities.

In 1966 the Woolworth Building was nominated National Historic Landmark and then New York City Landmark in 1983. 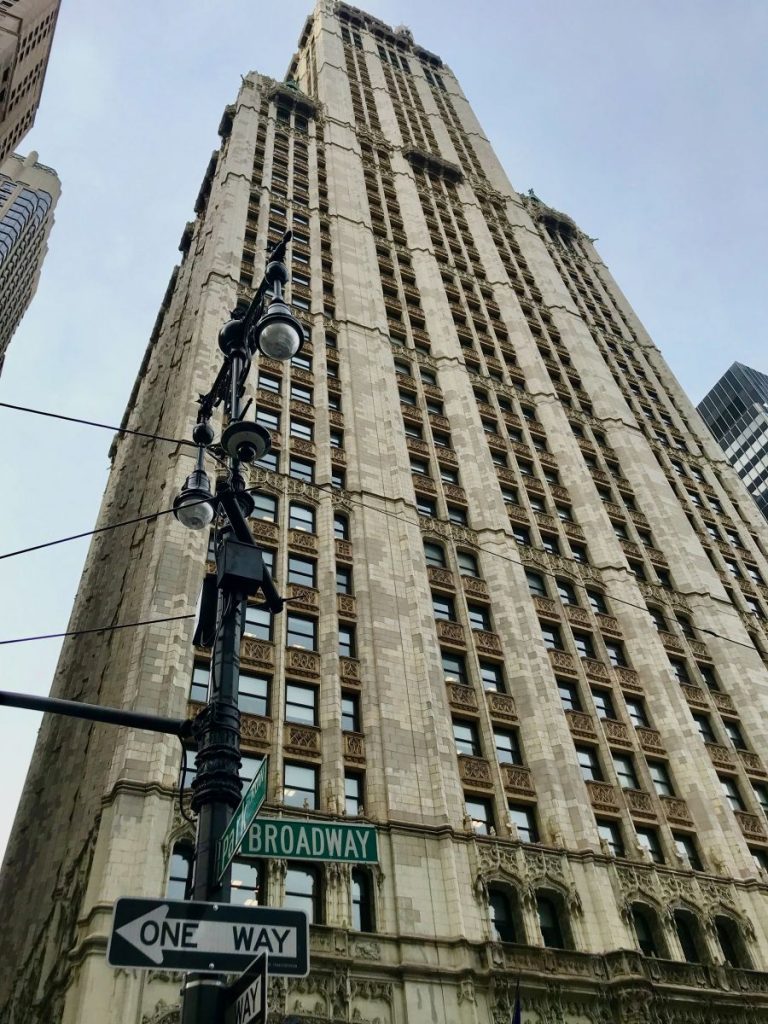 Deciding to visit the Woolworth Building it means to set out on an exciting journey back in time, in details, curious issues, names and stories tied indissolubly to the old New York.

You’ll have the chance to listen to the tales related to the birth of the building and the clever ideas of Frank W Woolworth by the voice of passionate guides, to find out that the idea of “department store” as we see it today was born right here. 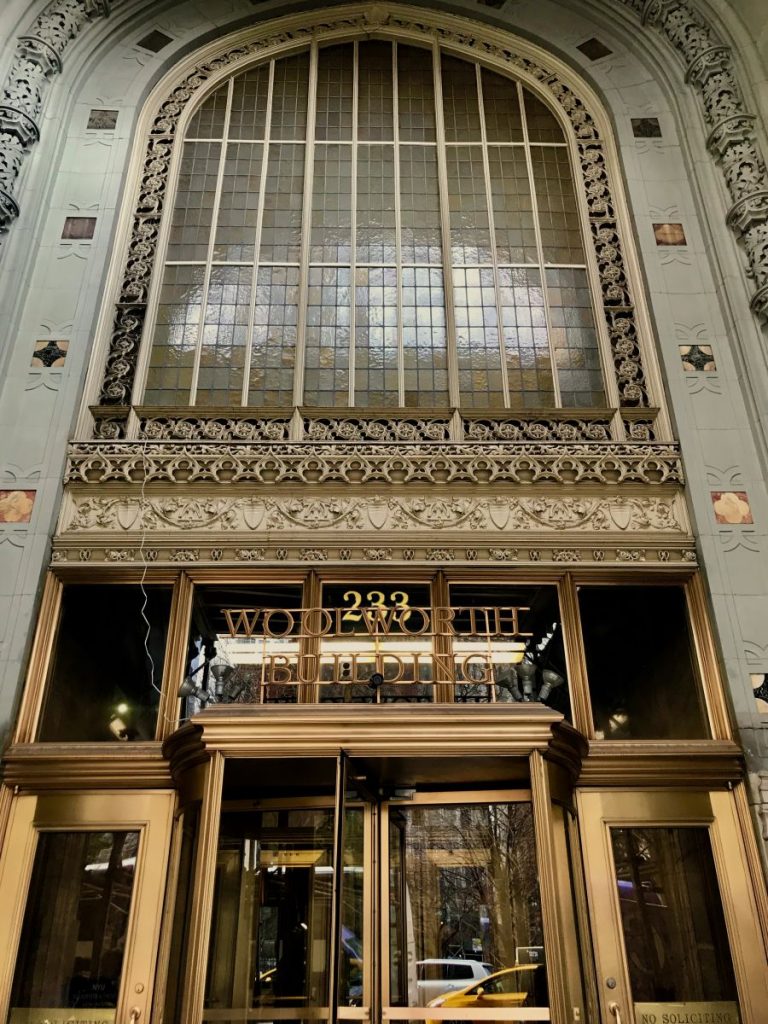 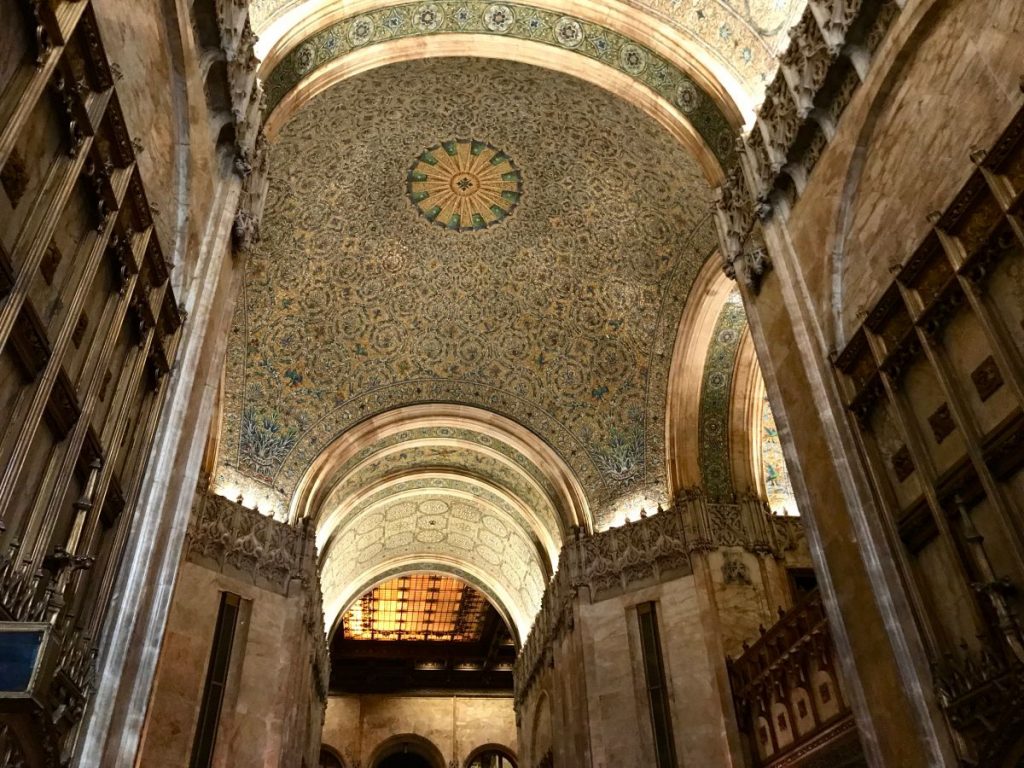 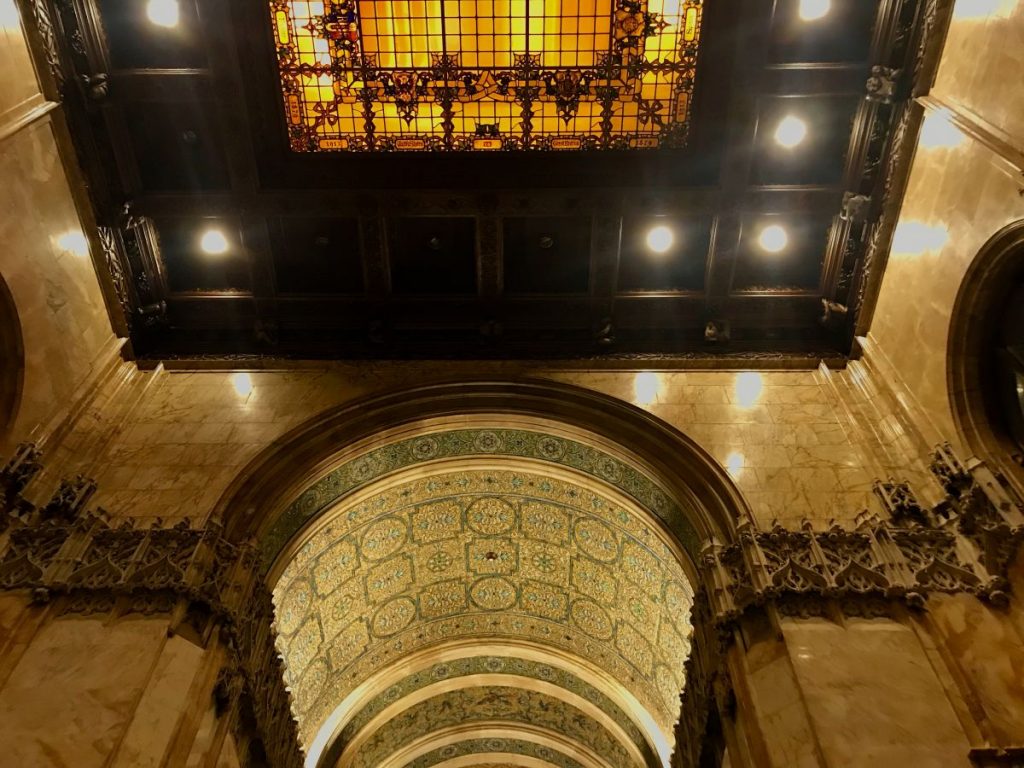 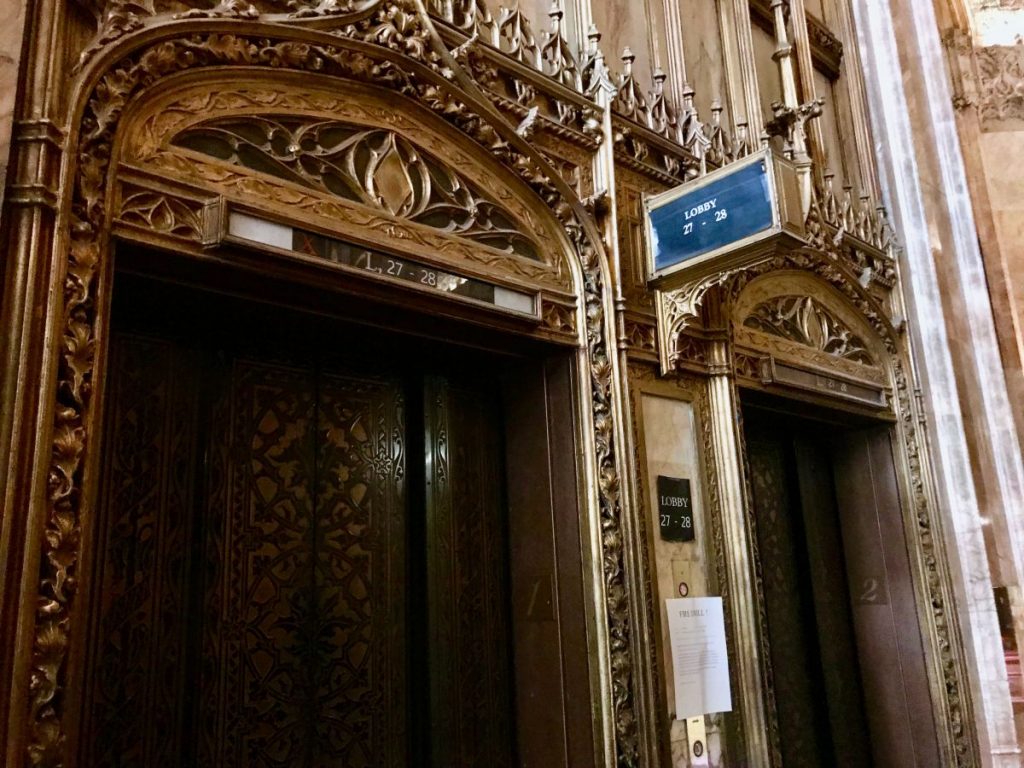 You will have the chance to explore the great Hall, its murals, the mosaics, the wonderful Tiffany windows ceiling, to take the old elevators and go to the Lower Level where some of the very beautiful sketches of New York in the early 1900s are kept.

To discover the symbols and the sculptures by Gilbert to make remember the story, the anecdotes and the characters of the Woolworth Building to the future generations. 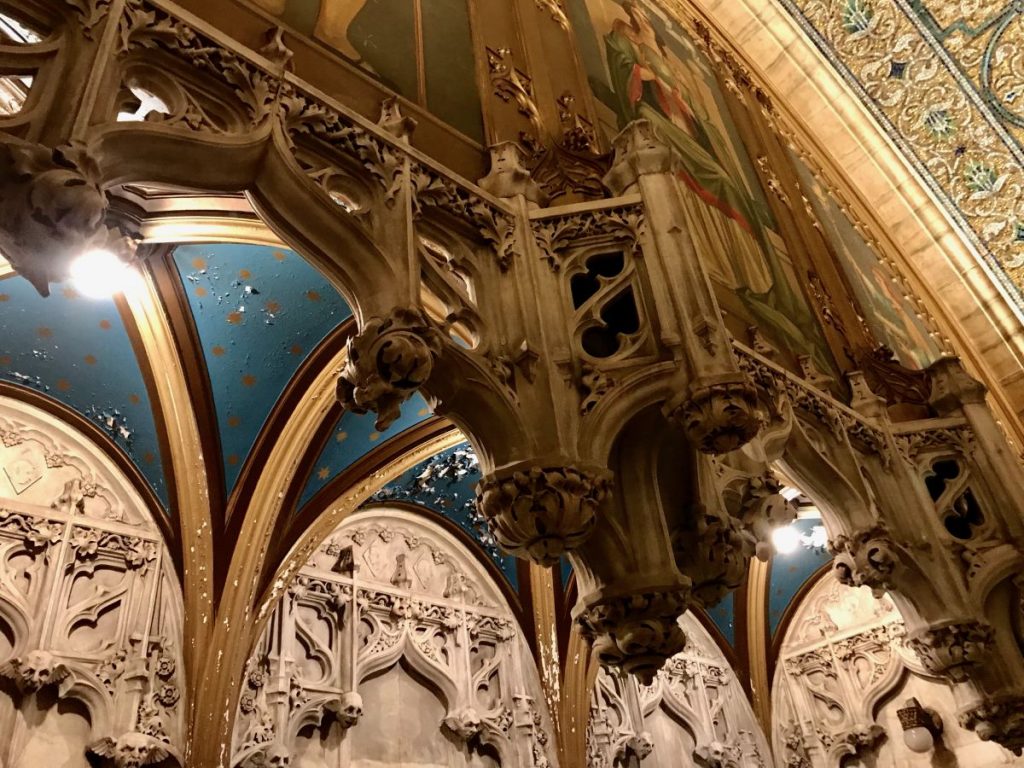 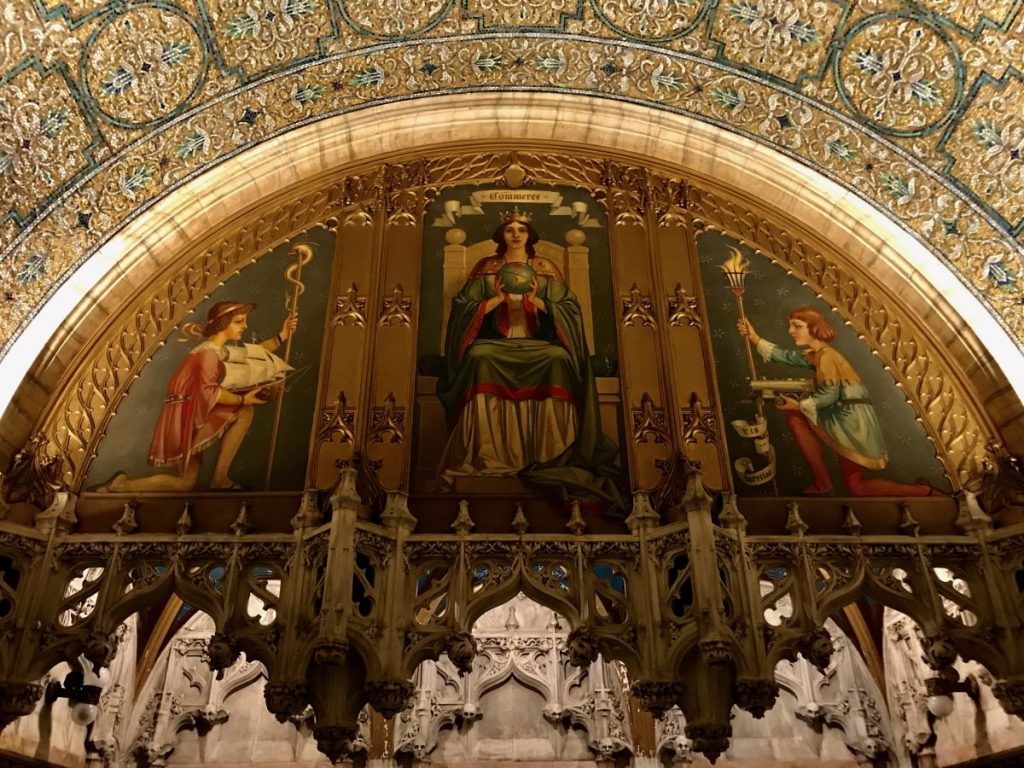 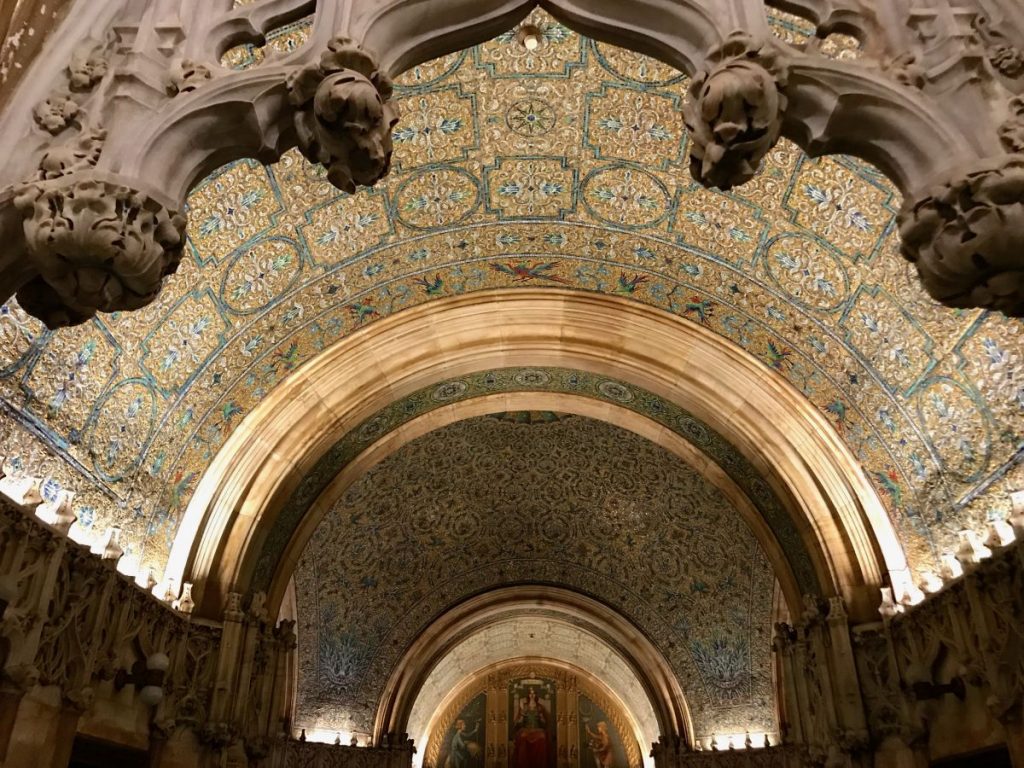 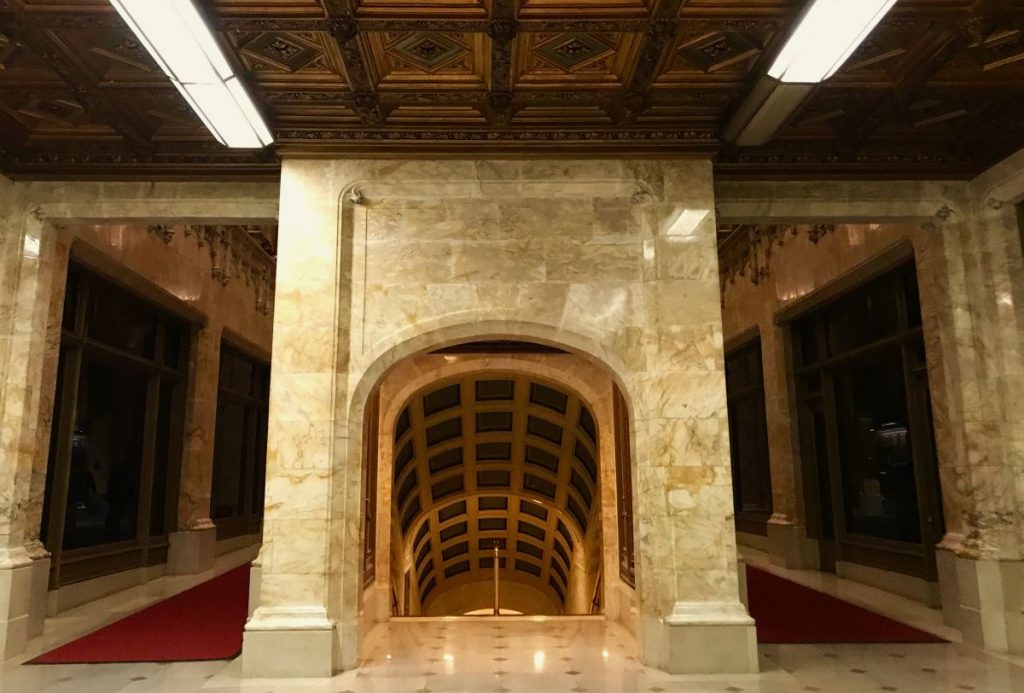 Historical places in New York: Woolworth Building, the access to the Lower Level 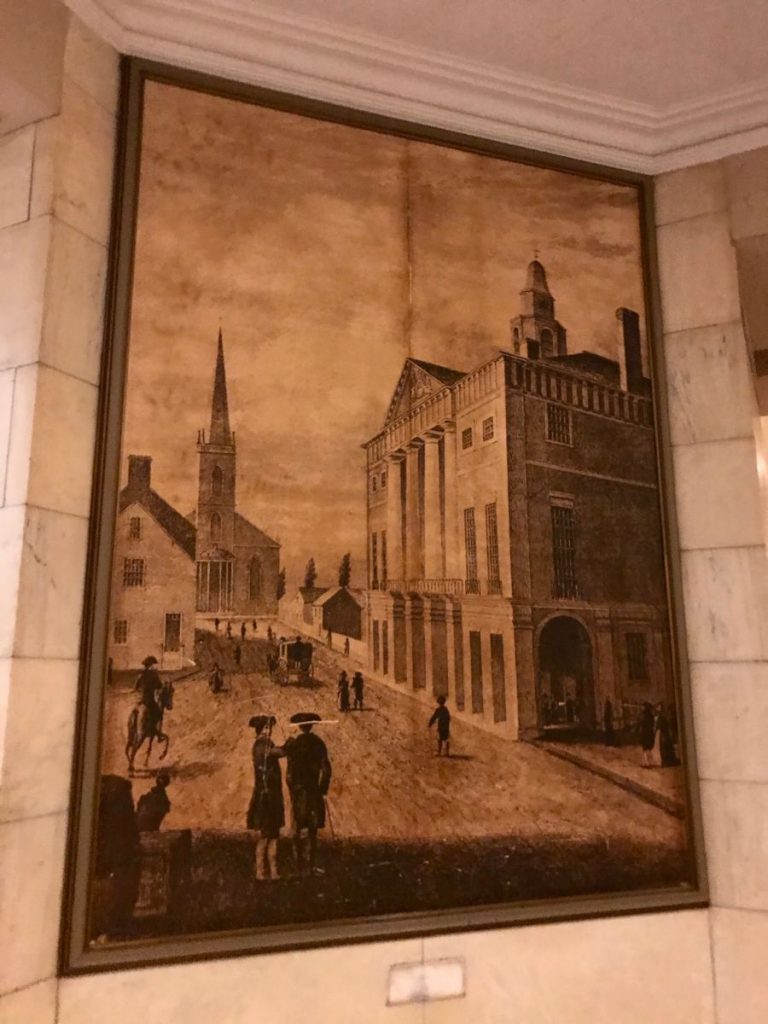 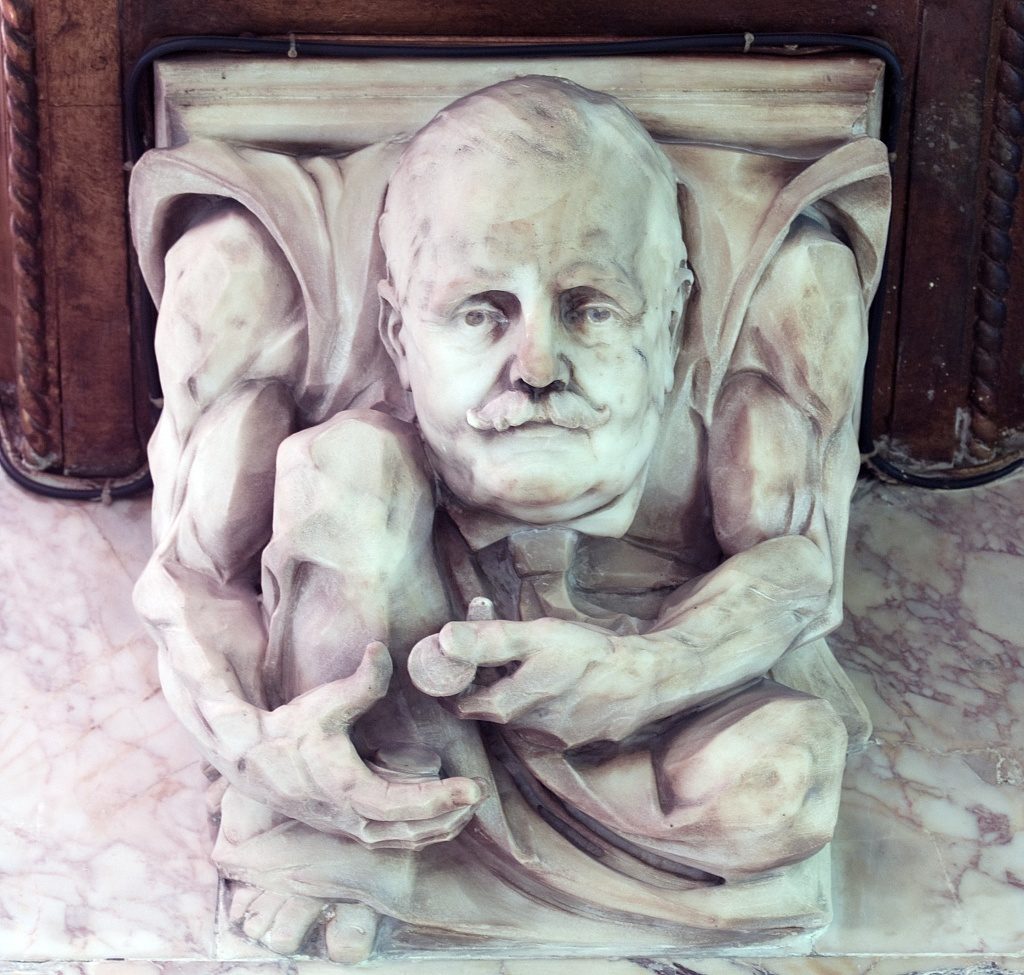 Historical places in New York: info and contacts for the tour

The Woolworth Building is located at 233, Broadway just in front of the City Hall Park.

It is possible – upon booking that you have to do directly on the official website, click here – to take part into three different typologies of tours, all in English.

Basic Tour – about half an hour to admire the amazing Lobby, get an introduction and take some photos. Recommended for photography lovers. $20

Standard Tour – about an hour to have a detailed guided tour from the outside of the building to the Lobby, downstairs. The most requested tour. $30

Deluxe Tour – a deep tour of an hour and a half about for lovers of history and architecture. It will allow to discover story, anecdotes, characters and curious issues about the building besides discovering briefly the amazing buildings of the neighboring area. $45

Private Group Tour – upon request, and well in advance – also private group tours are scheduled. In this case, you can send an email to Helen Curry – Info@WoolworthTours.com – or call 203 966-9663 to book. 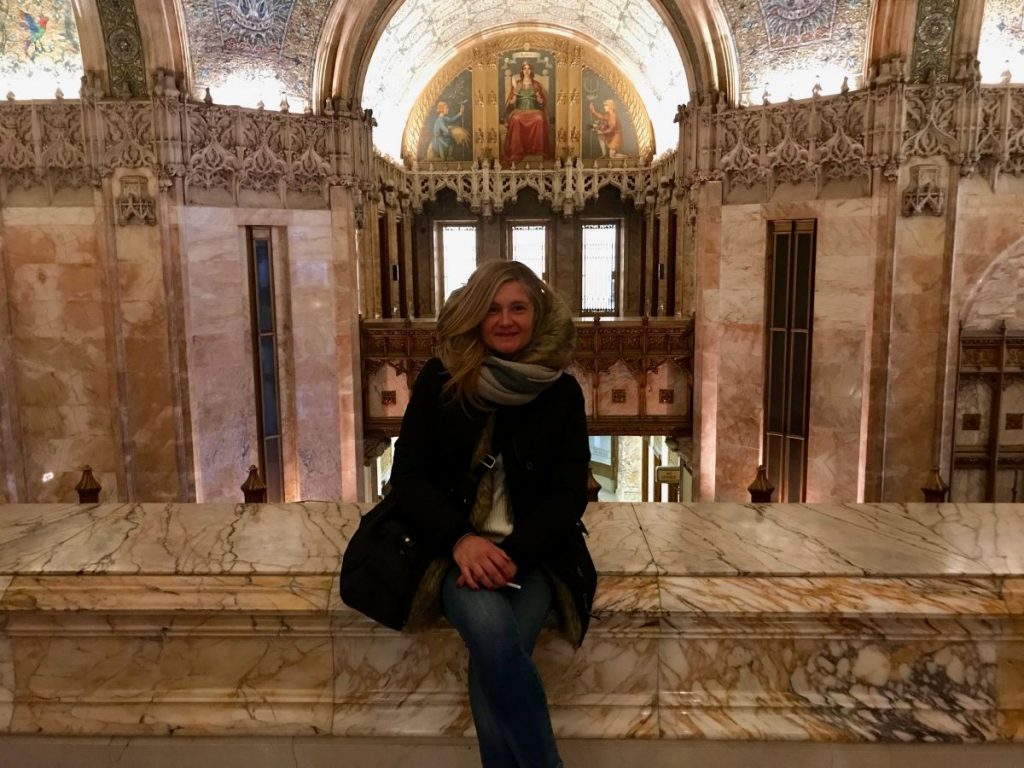 The guides are extremely motivated and prepared.

Inside the building there are no wardrobes where to leave coats, rucksacks and jackets, so it is recommended to show up the “lightest” possible.

No big bags or jackets, since you should take them with you all along the entire tour.