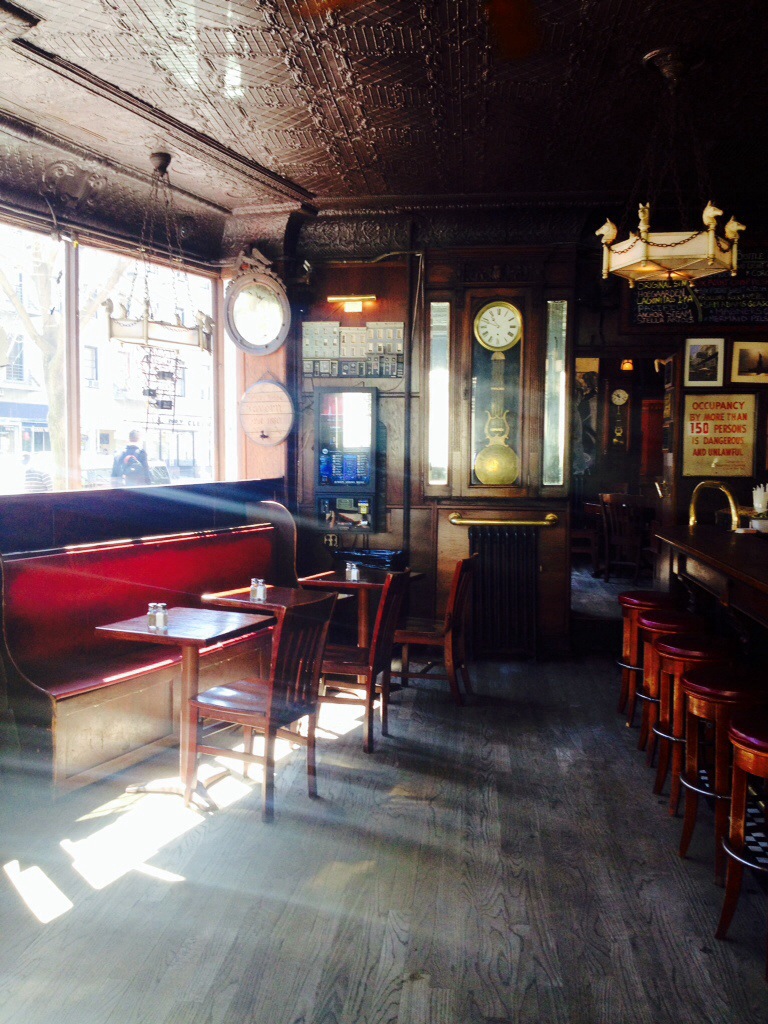 Inside the White Horse Tavern

We are used to hearing about it and tell it as a symbol, almost suspended in time and space… the skyscrapers, the lifestyle and the endless possibilities, the museums, the cult places, its multiculturalism, its being so cool and the magnetic charm that inevitably has on millions of people that every year arrive to visit it

But often we forget that New York is a city with a past full of stories, events, characters and “shades” still little known and very scheming.

So it happens that an article i read about the many houses and the vintage buildings that have haunting presences has become, in my last visit in the city, an original and unusual tour to discover these places and their creepy stories.

In the West Village, between Hudson St. and 11th St, just a block away from the famous Magnolia Bakery, there is the old White Horse Tavern. 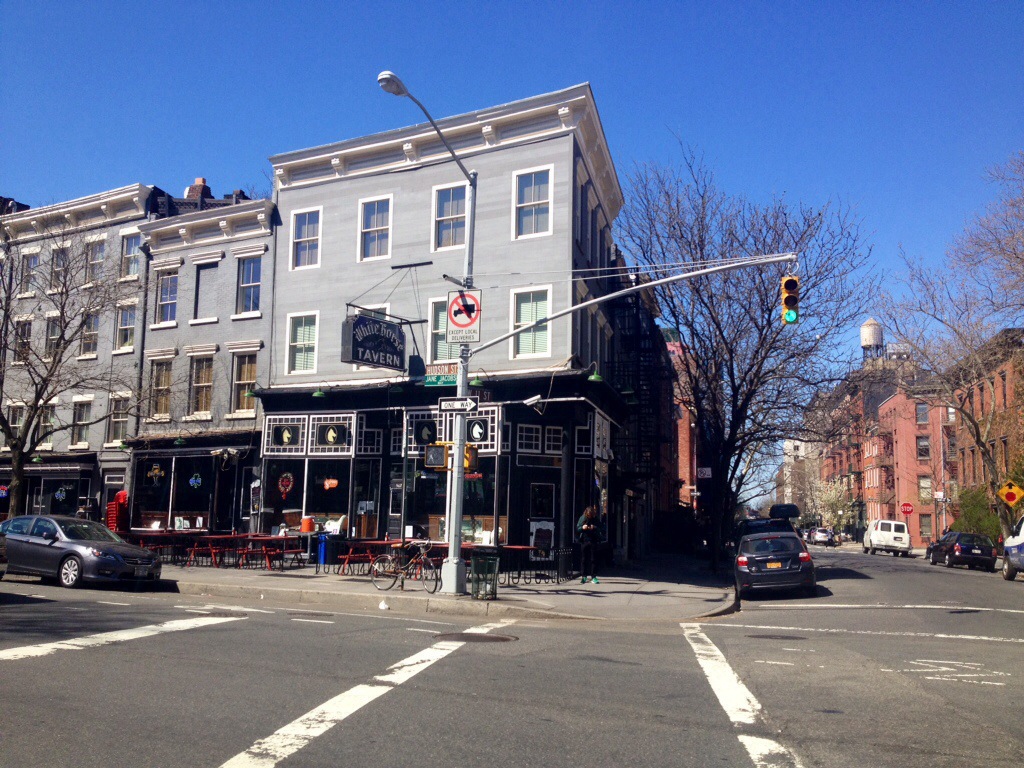 Built in 1742 this ancient and charming tavern has hosted over the years many poets, artists and celebrities.

One of these was Dylan Thomas, famous english poet, who often went to the tavern in the 50s. Here, as he liked to repeat often, he stopped for an infinite time to observe people in search of inspiration for his poetry.

Inside the White Horse Tavern

The story tell that in an attempt to break the record of 18 consecutive shots of whiskey (it was known that Thomas was an alcoholic), drunk, it fell out of the tavern and hit her head on the sidewalk reporting a cerebral edema, presumed cause of his death the next day at St. Vincent Hospital.

The Tavern is in itself really curious and fascinating, crossed the front door really seems to make a jump in the past.

Just in the room where Thomas used to sit there’s a portrait of him and a plaque that commemorates the passage. 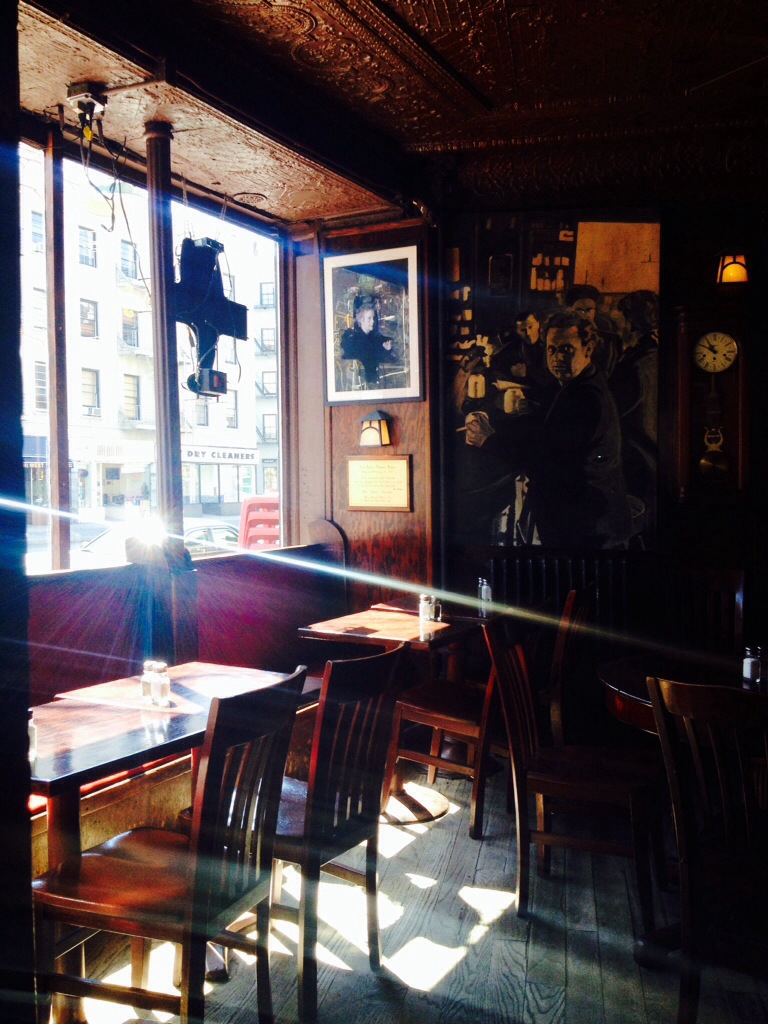 The White Horse Tavern, the favourite place of Dylan Thomas. His portrait is on the wall

Many, including the barman, claim to have seen him comfortably seated on his favorite stool in a corner of the bar with the glass of whiskey in a hand, watching the people and then suddenly disappear at the slightest hint towards him.

Someone else instead swear they saw him walking restless out of the tavern at the point where, once stumbled, he hit his head.

Believe it or not the story of the ghost of Dylan Thomas (that I haven’t met) the White Horse Tavern, in the variegated world of the West Village, is truly a special place and definitely worth a visit, also only to sit and drink a beer, eat something, have a chat with the people and enjoy the atmosphere of Old New York.

Further east towards the Greenwich Village on 10th Street between Fifth Ave and Sixth Ave, you will come across a Greek Revival Style building in red brick.

Nothing of exceptional if it were not for the plate located on the left of the main entrance, which refers to the Mark Twain short stay, between 1900 and 1901, and also for the story of a murder still unsolved. 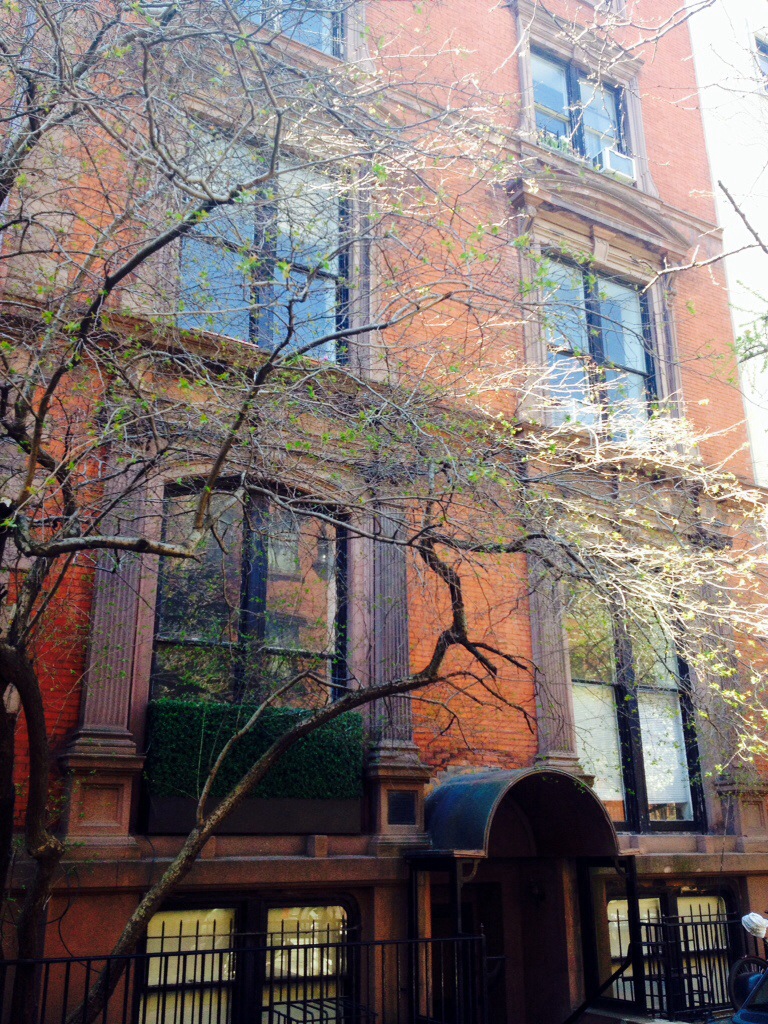 Judging from the stories on the building seems that the tenants hardly withstand more than a year.

There’s who says that a nice gentleman in white dress with a thick beard and disheveled hair ( Mark Twain?) scare people appearing and disappearing suddenly in the stairwell. 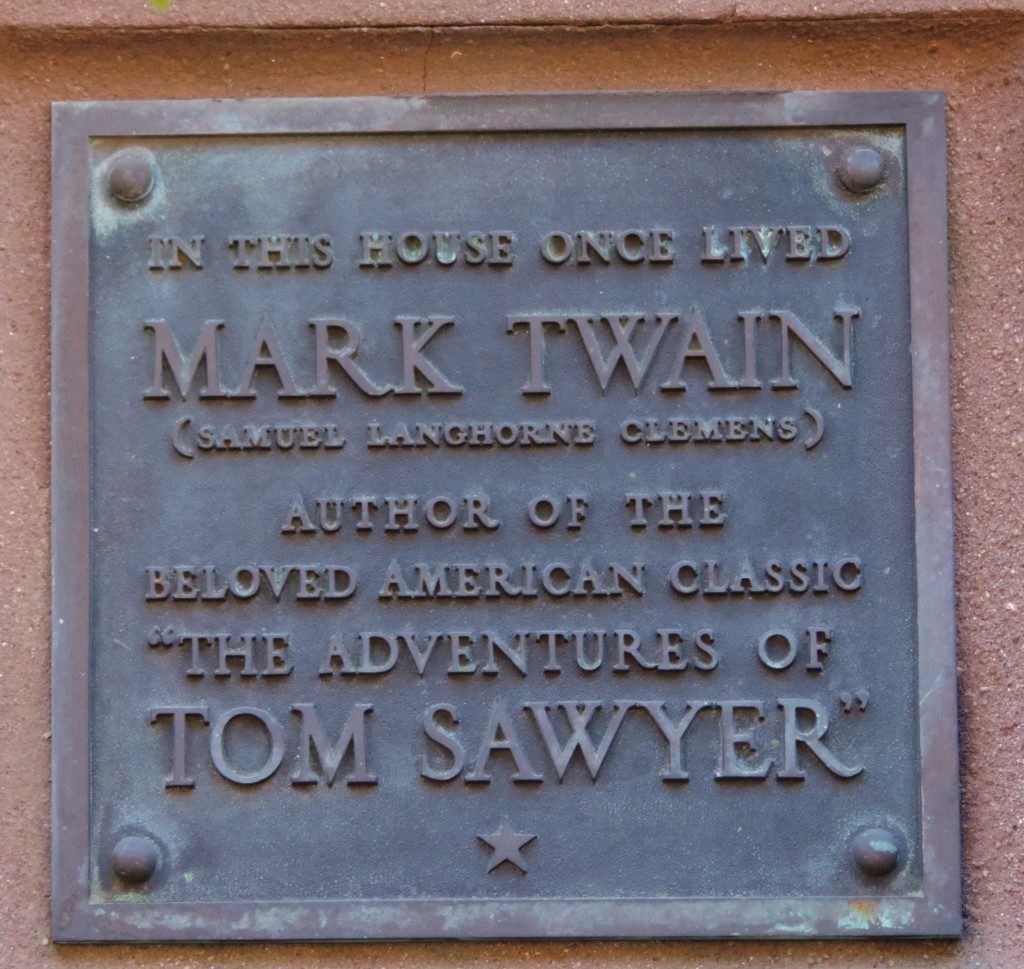 The Death House, a plaque in memory of the stay of Mark Twain

Then there are those who referring to the book by Jan Bryant Bartell, “Spindrift: Spray From a Psychic Sea”, wrote right here, about the disturbing murder of a six year old girl in the ’80s, say they warned outside noises, moaning and sometimes heart-rending cries.

Soho, 129 Spring Street, the Manhattan Bistro, a building dating back to 1817.

Here the legend is intertwined with a true story assuming contours much clearer and more interesting, not surprisingly in the environments of the paranormal is considered one of the 10 most haunted places in America. 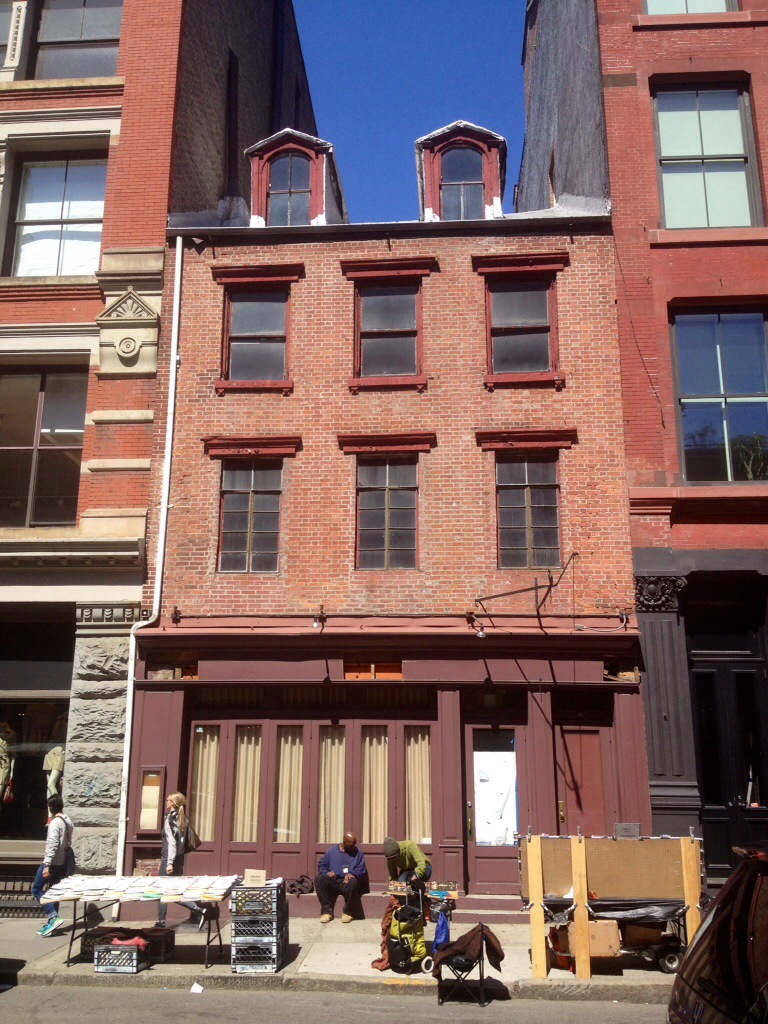 On this site, exactly in a well, in 1799 was found the mangled and lifeless body of Gulielma Elmore Sands.

The trial, the first certificate in the history of New York, where the alleged murderess was her boyfriend Levi Weeks, ended with an acquittal for lack of evidence, thanks to his lawyer, the skilled and famous Alexander Hamilton, the private assistant of George Washington (do you know Hamilton Heights in Harlem?)

The murder remained unsolved, twenty years after the well was closed and on the land was built a private home which later became a tavern, the Manhattan Bistro in fact, now closed and left to itself.

There are rumors in Soho that the house is haunted (it seems that the real reason why the tavern has closed is just that), especially after that, in the rooms of the basement, was discovered the infamous well, so the story of Gulielma Elmore Sands is returned to the news. 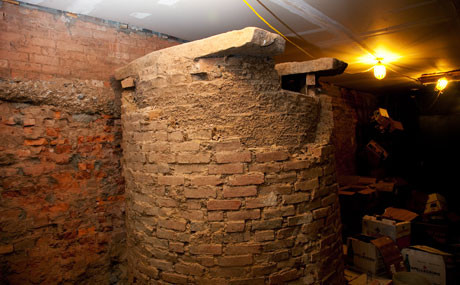 The Manhattan Bistro, the well

It seems that more than one occasion the figure of a woman dressed in nineteenth century completely wet has appeared, in the corridors and in the basement, and that many men employees of the tavern were beaten and pushed down the stairs, and also that in more than once customers of Bistro saw the bottles of the bar suddenly rise and fall on the floor.

Today the Manhattan Bistro is in an advanced state of disrepair, it seems that no one wanted to take over the management of the Tavern (photos of Bistro in activity and the well come from the web, it is impossible at present to be able to access it).

The chronicles of the process say that the sister of Guglielma, following the acquittal of Levi Weeks, said in front of everyone, in the court, that if Levi was the real guilty, his lawyer Alexander Hamilton would have had to suffer untold suffering with an early death and not natural … “If he dies a natural death, I shall think there is no justice in heaven,” he later added.

Could you believe that Hamilton died in atrocious torments, as a result of injuries sustained from a duel?

Through Tribeca, along Church Street you reach the site of Ground Zero, infamous for the events of 9/11.

Just opposite there’s the St. Paul Chapel, the last intact Church dating back to the period before the Independence War, an oasis from the hustle and bustle of Lower Manhattan, remained miraculously unharmed after the collapse of the Twin Towers in September 2001 . 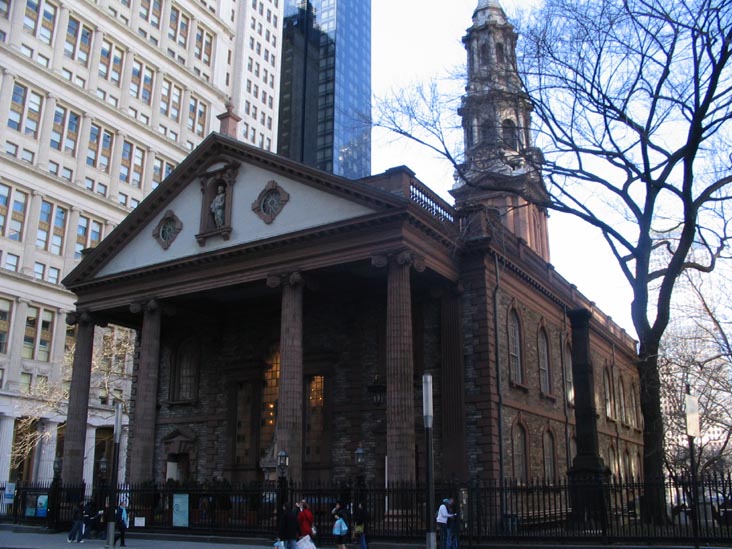 In its ancient cemetery rest some characters more or less known of old New York. These include the actor George Frederick Cook who was buried here in 1811, after the death caused by a long illness.

The actor, in financial straits, to pay his medical expenses and the burial, shortly before his death decided to “sell” his head to science, so he was buried without skull.

It seems that his skull after being used for years by the students of the Faculty of Medicine, ended up in the Broadway theater productions of Shakespeare’s Hamlet, then it disappeared. 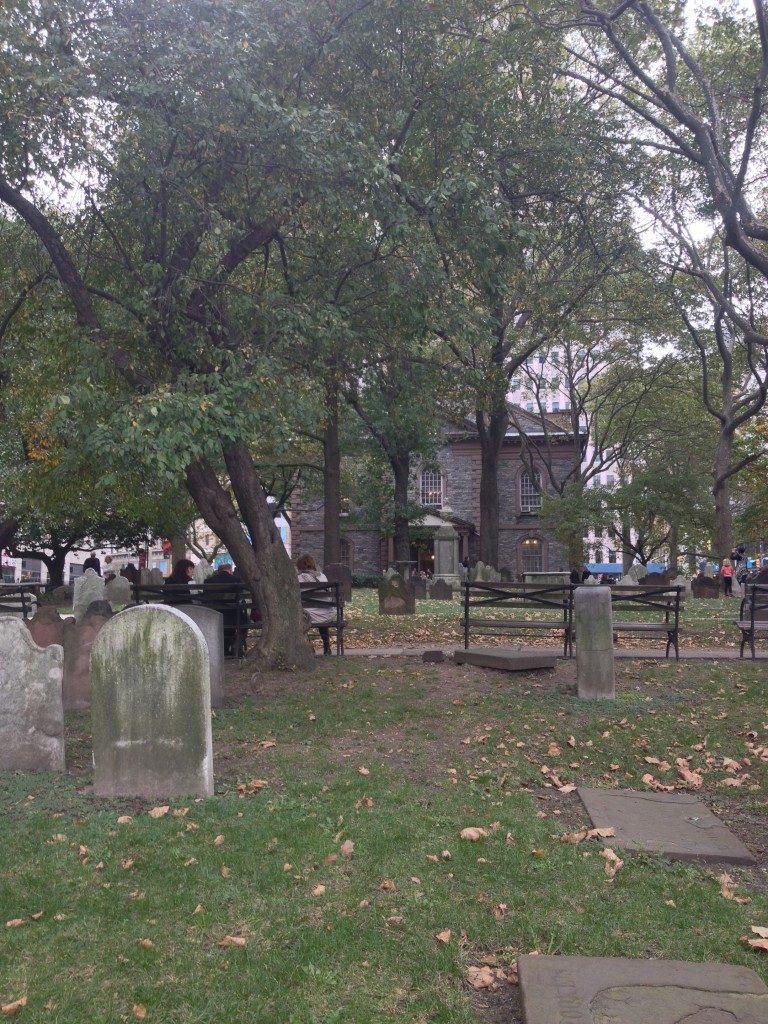 It is said that at night, looking through the old gate of the cemetery is easy to see the shadow of a headless man who wanders among the graves looking for something … some people say that George search for his head and that only in this way can find peace.

And if I told you that New York is full of stories and places like these and that is not absolutely over here?