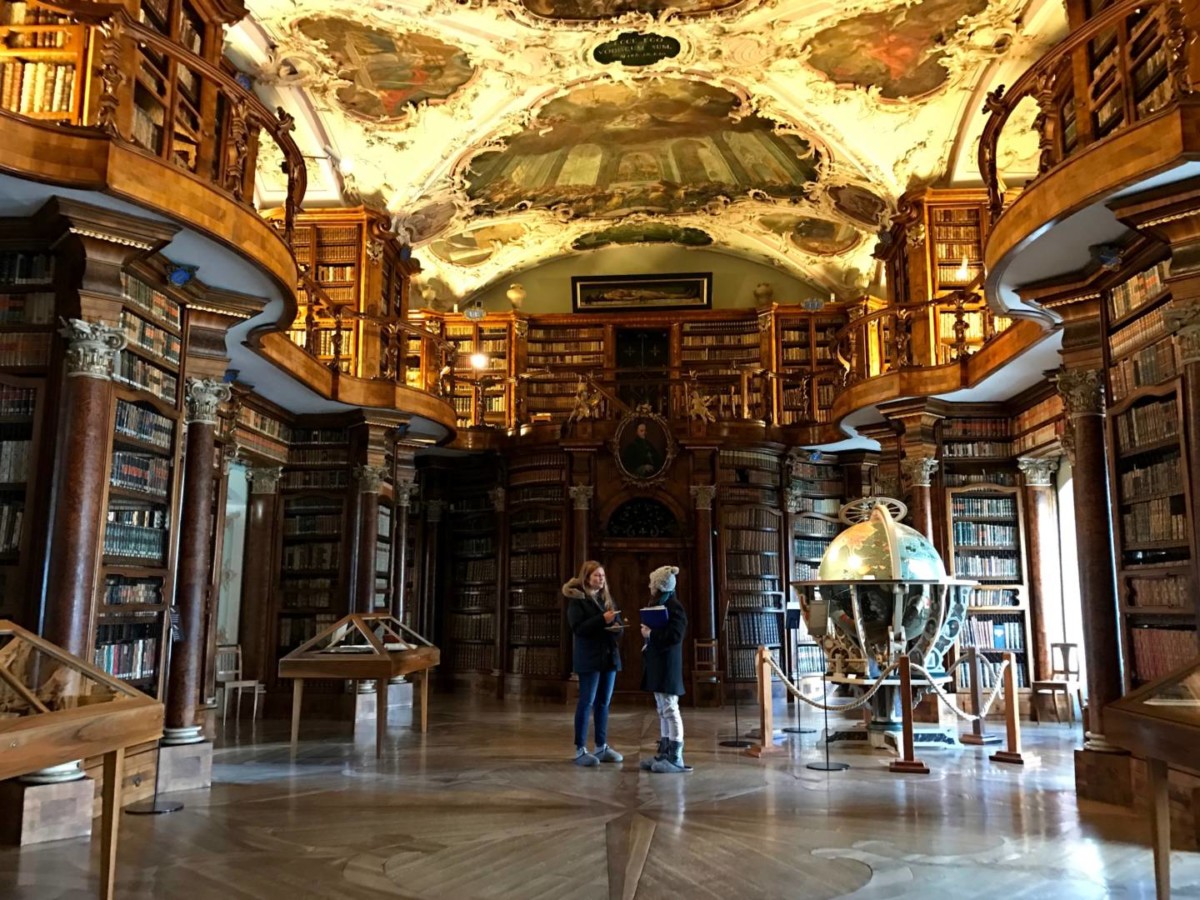 Visit the Stiftsbibliothek St. Gallen is a special, intense and probably unique experience.

An emotional journey back in time through history, literature, medicine, music, art, even gastronomy, love and unconditional devotion.

And the statement of fact that it’s right thanks to places like this – invisible bridges suspended between past and present – that it was possible to preserve over centuries what we are, what we come from and inevitably in some ways what we depend on. 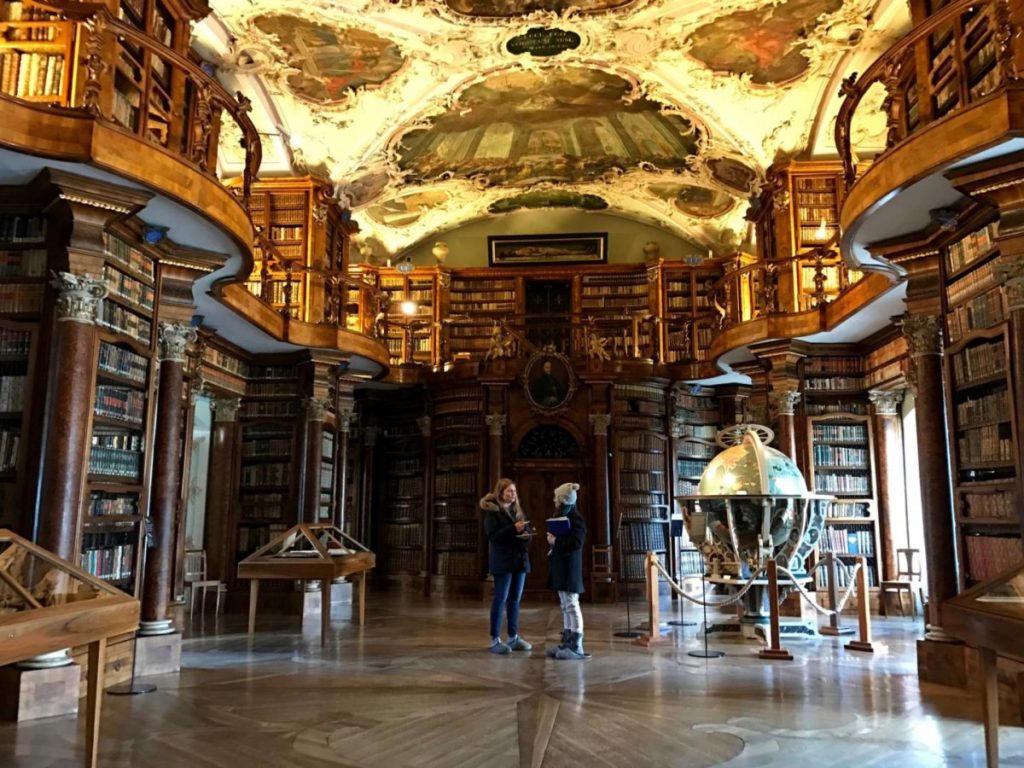 Visit the Stiftsbibliothek St. Gallen: impressions, quotes and a bit of history

“We live for the books.

A sweet mission in this world dominated by disorder and decay”

Do you recognize these words?

They are based on the novel – and then wonderful film dating back to 1986 with Sean Connery – “The Name of the Rose”.

The author, Umberto Eco, spent even 3 months in one of the most ancient European Libraries – right the Stiftsbibliothek St. Gallen (in Switzerland) – to complete his book, working, without never stopping, about the biographies and the works of the amanuensis monks for the definition and the characterization of his characters.

Today have the chance to be in this space out of time and be able to visit the Stiftsbibliothek St. Gallen personally is really priceless. The feeling to find oneself in the perfect place where to talk to the past, surprising oneself, dream, learn and let it to be a lesson.

The library at that time known as Scriptorium – meant as a collection of the first texts of the amanuensis monks – in origin was born in an adjoining environment to the St. Gallen Abbey, in the Benedictine monastery with the same name (today in part museum pole and the seat of some public offices) founded in 612 by the Irish Monk Gallen.

The Stiftsbibliothek that we see today was built only around 1760 for the will of the Abbott of that time, Celestino Gugger von Staudach.

Thanks to the building, the elaborated inside decoration and the quantity of precious works kept inside it, the Stiftsbibliothek St.Gallen is counted among the most precious, richest and ancient libriries in the world. 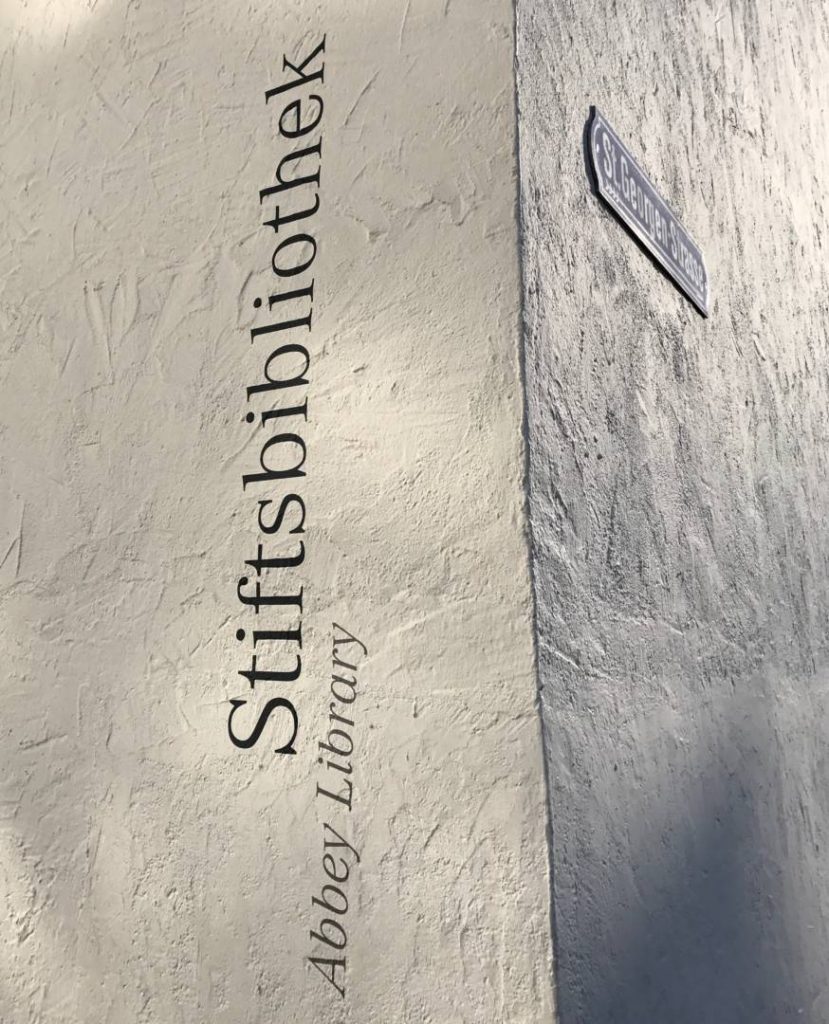 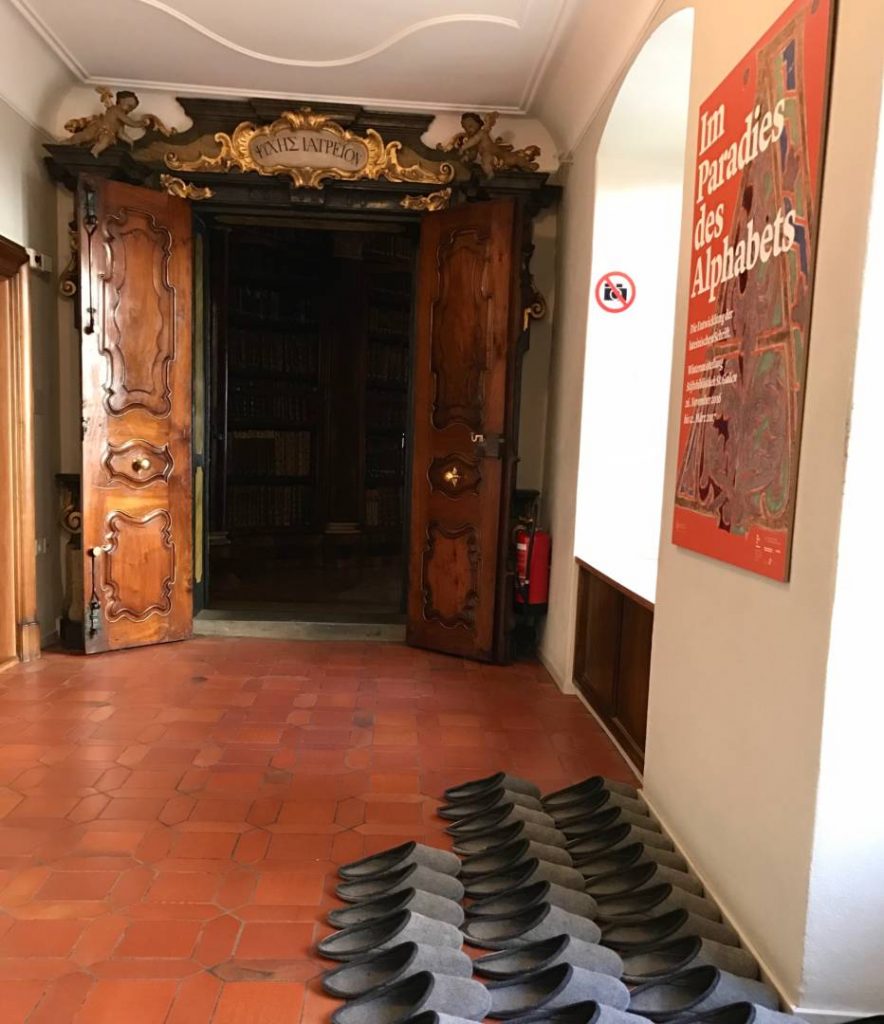 Visit the Stiftsbibliothek St. Gallen, the entrance corridor to the library: you must use the felt pads

2.000 inestimable manuscripts: among them 400 date back to the First millennium, included some precious illuminated bibles dating back to V century.

An Egyptian mummy dating back to VI century BC jealously preserved and the most ancient plant of a monastery complex in the world – with all buildings, communication ways, passages, destinations of use, even the different cultivations of the vegetable gardens – discovered by chance on the back of a parchment reused by a monk to write “Life of Saint Martin”.

And then there are the feelings, the perfume of the old wood, the parchments and the books’ covers shaded with time.

The clean types of the Quadrata Capitalis script, used by the monks putting the capital letters in squares without intervals, a long and very difficult work, in a period where italics was

used exclusively by traders. And the letters remarked on the shelves to indicate titles and themes treated in alphabetical order but letter A, meant as the beginning of everything and reserved exclusively to the holy scriptures. 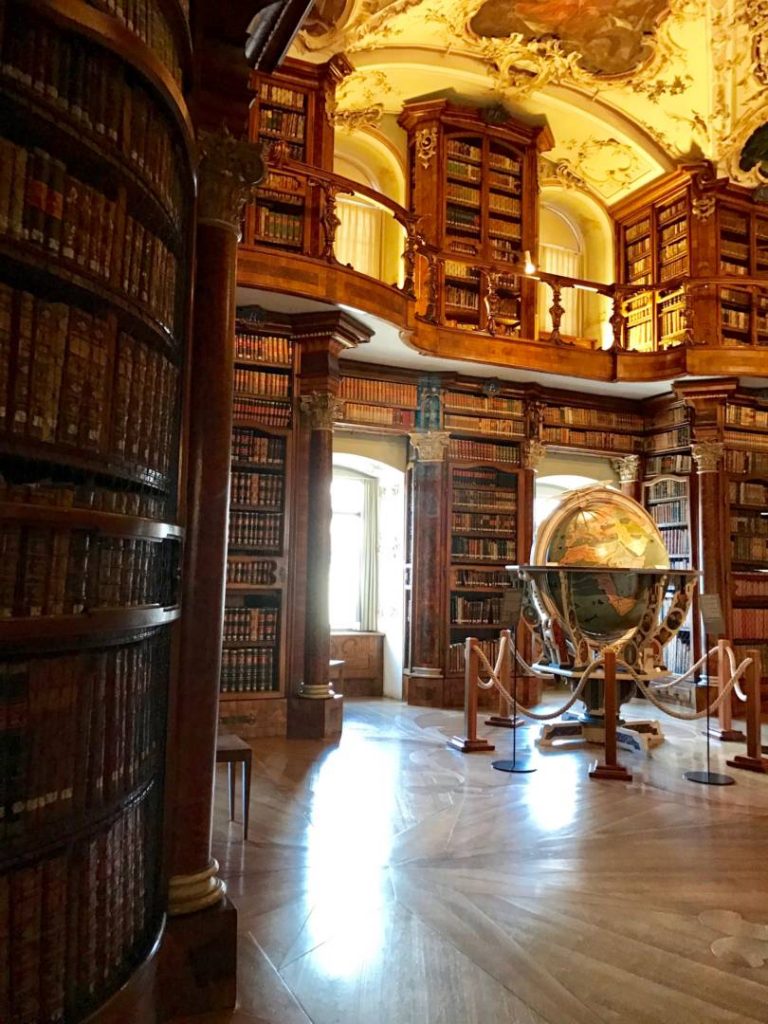 Visit the Stiftsbibliothek St. Gallen, the main door to the library 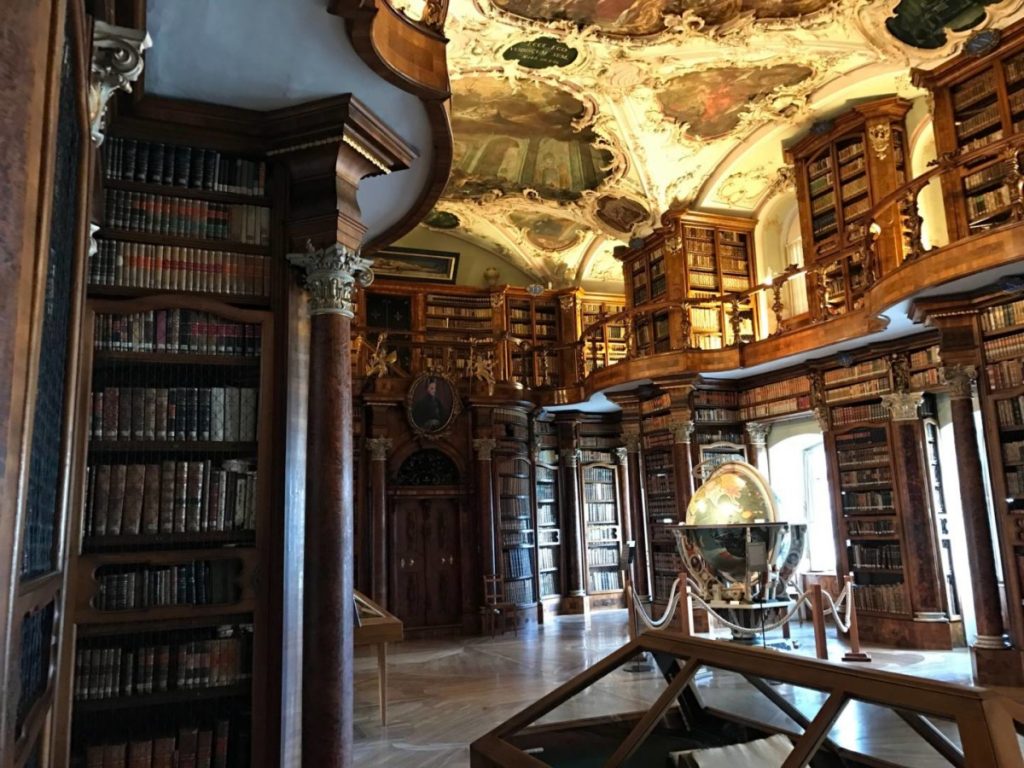 And the carved floor creaking at passage, the exact copy (the original one was purloined and took to Zurich) of the sixteenth century globe inspired to one of the first terrestrial maps (the Mercatore one dating back to 1569), the suffused light entering through the windows. The “hand” notes of the monks – the so-called neomi – about the text related to the Gregorian chants to not forget melodies and intonations of the first Gregorian chants, the small columns of the shelves opening as if by magic to show indexes and codes and the “recipes” of friars and learned men dating back to the 1400s.

As those ones of the Italian doctor Antimo about “health eating” and the use of spices which have been inspiring for years the seasonal menus that Ambros Wirth, fond of cuisine and history, re-proposes in his Schlössli Restaurant, less far from the Abbey. 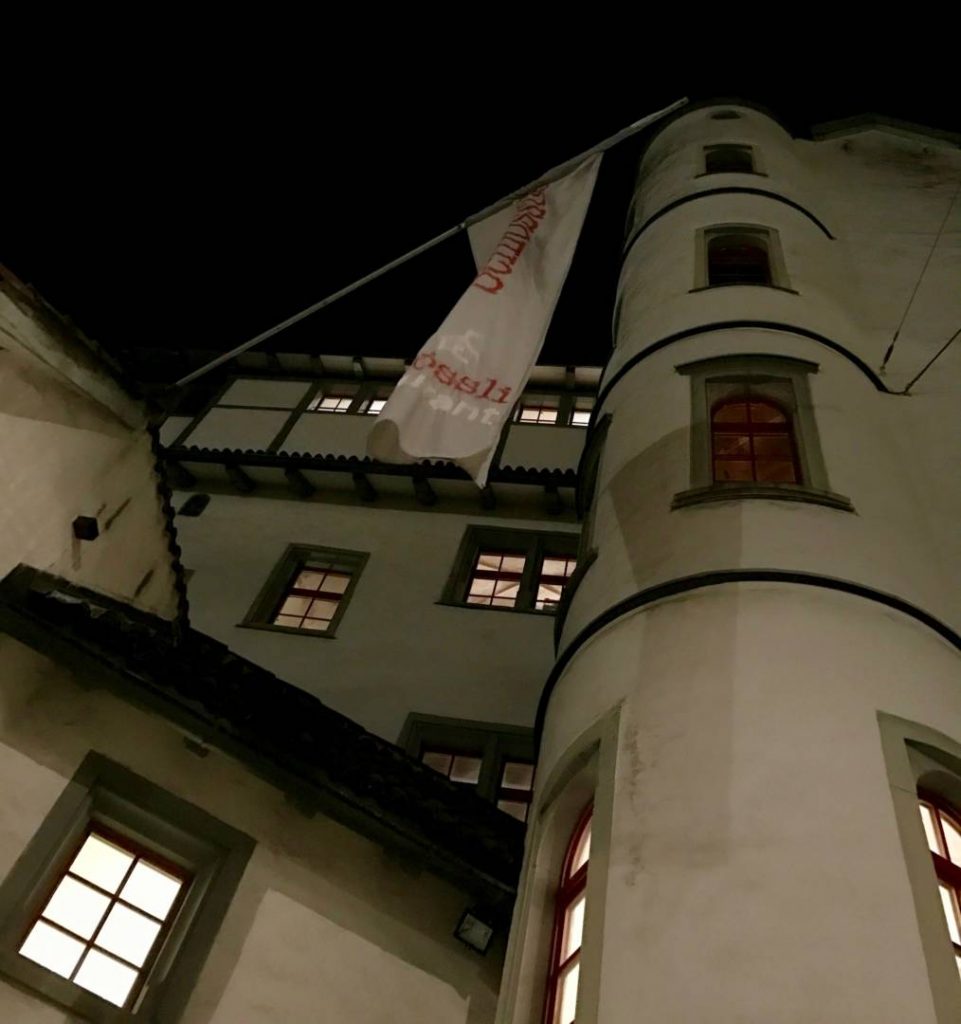 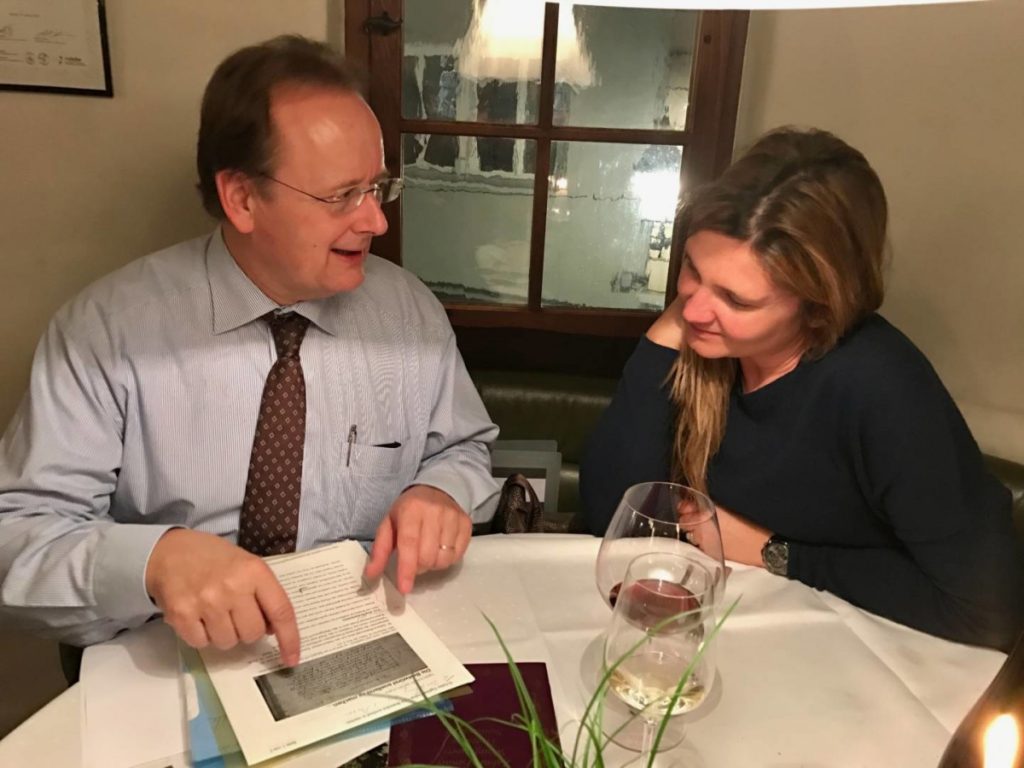 To visit the Stifotsbibliothek is recommended to hire an audio-guide (available in several languages at the ticket office).

Or even better to make you accompany during the exploration of the entire room by a valid guide who is able through his/her anecdotes and tales to transmit not only the usual historic information – that you find on the official website or in the informative brochure at the entrance – but also and above all the emotions, the charm and the magic. And to make realize the roll by of time through the ancient texts, the miniatures, the codes, the scores and the parchments. 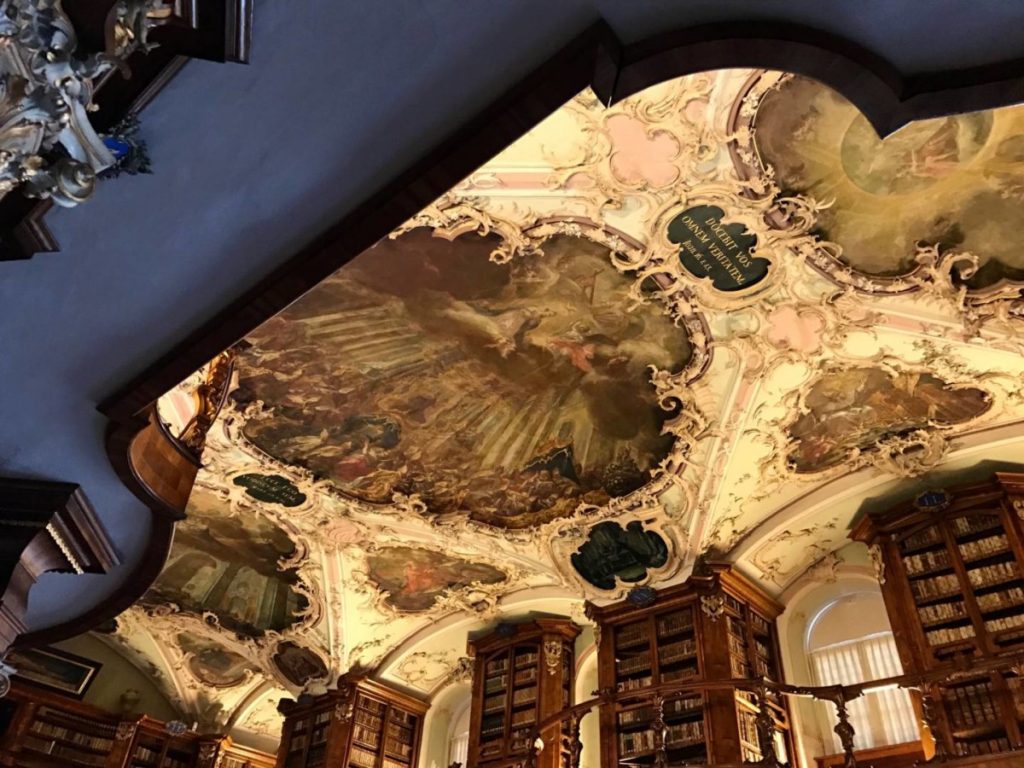 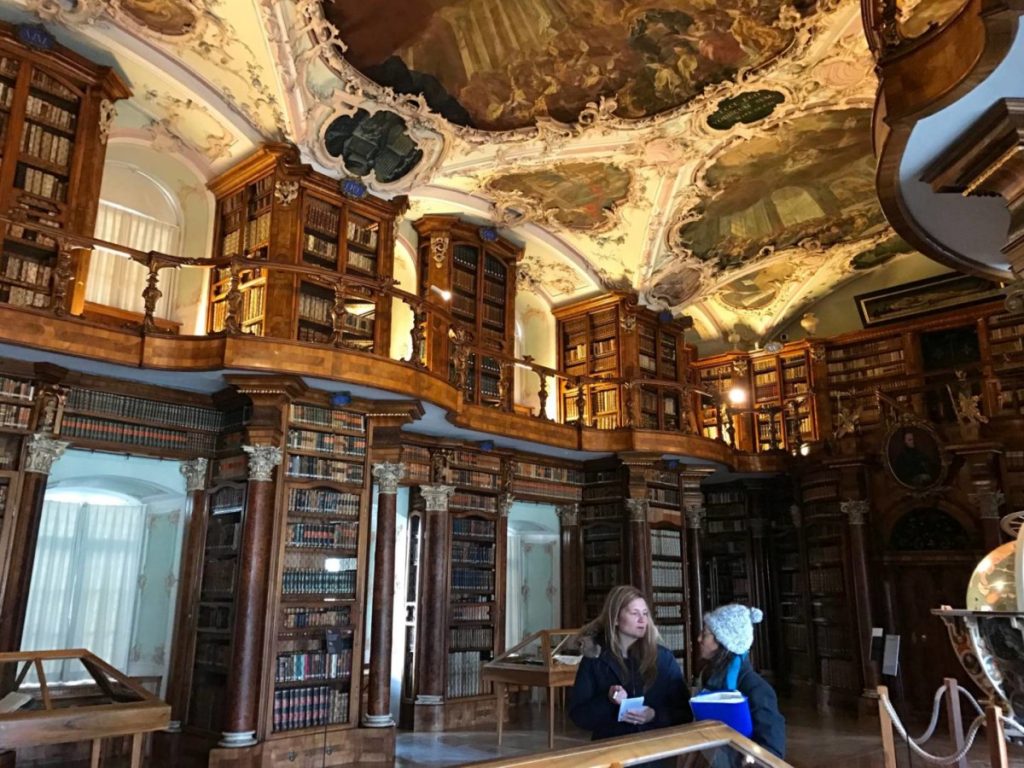 The library is opened Monday-Saturday 10am-5pm. On Sundays 10am-4pm.

It is practically impossible to be able to get the permission to look the texts up, unless you aren’t doing researches of a particular interest and historical value. In this case you have to ask for a special permission to the Catholic Administration of the Canton of St. Gallen well in advance.

However, on the CESG website – St. Gallen Electronic Codes, a sort of a virtual library – it’s possible to examine free all the texts present in the Stiftsbibliothek, duly photographed and digitalized.