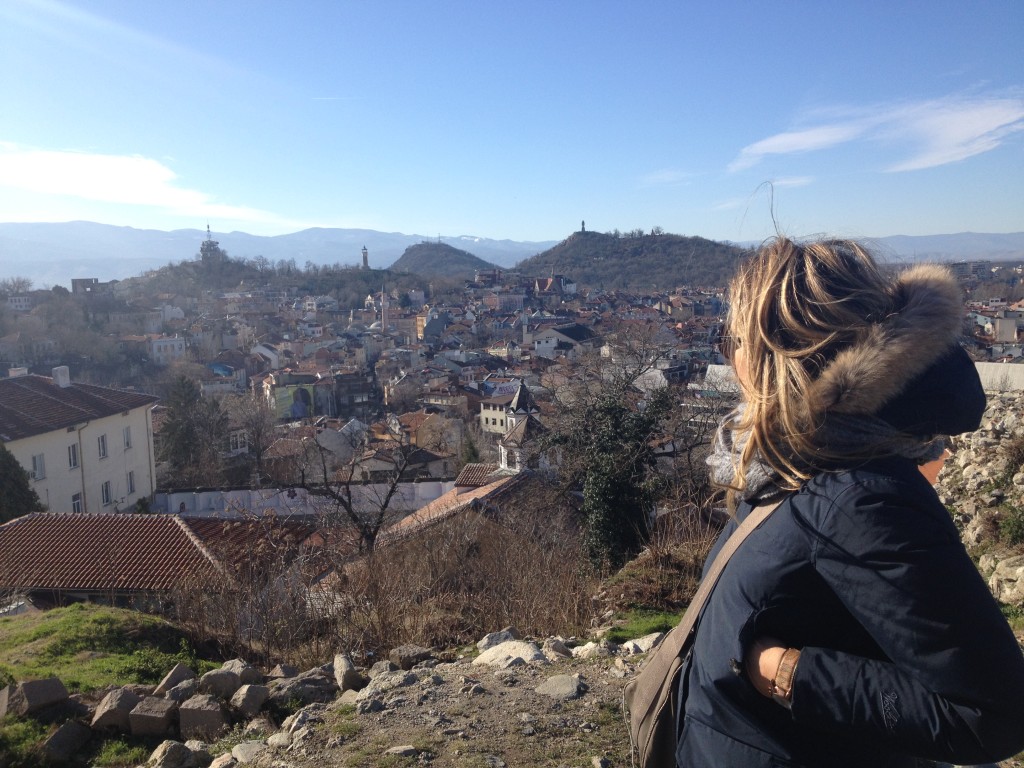 A small crossroads between East and West, its first settlement was founded by the Thracians in 5000 BC.

Then came the Macedonians, Romans and the Huns who plundered destroying good part.

From its ruins recaptured was born an important military outpost “Protobulgaro”, then the Byzantines and the Ottomans made it one of the largest commercial and cultural hubs of the region.

But it was in the period of the National Revival, known in the history as the Bulgarian Renaissance, in the mid 1800s, that Plovdiv reached its peak rivaling in prestige and beauty (i’m thinking at the beautiful symmetrical houses of the old town) with its capital, Sofia. 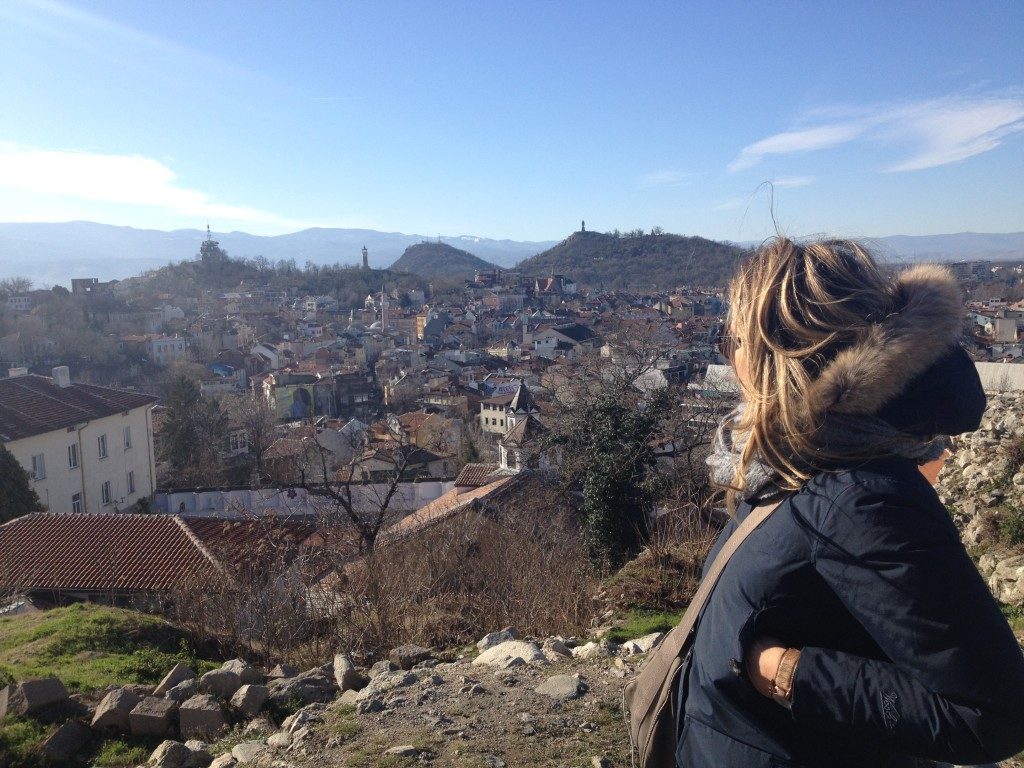 So, no surprise (if anything, one more reason to visit …) to discover that this delightful and charming university town in south-eastern Bulgaria, has been designated along with the beautiful city of Matera, in Italy, as european Capital of Culture in 2019.

Its steep streets and cobbled, the archaeological monuments which alternate with the Orthodox Churches and the Mosques in a singular harmony of contrasts, the small cafes, the animated life in the town center, the art galleries, that once in a year in the September in a magical night remain open until the early hours to allow visitors to explore them for free, the houses of the old town, the gardens and the view from the Hill of Prayer, the music of street artists accompanying the exploring ofmuseums and shops.. 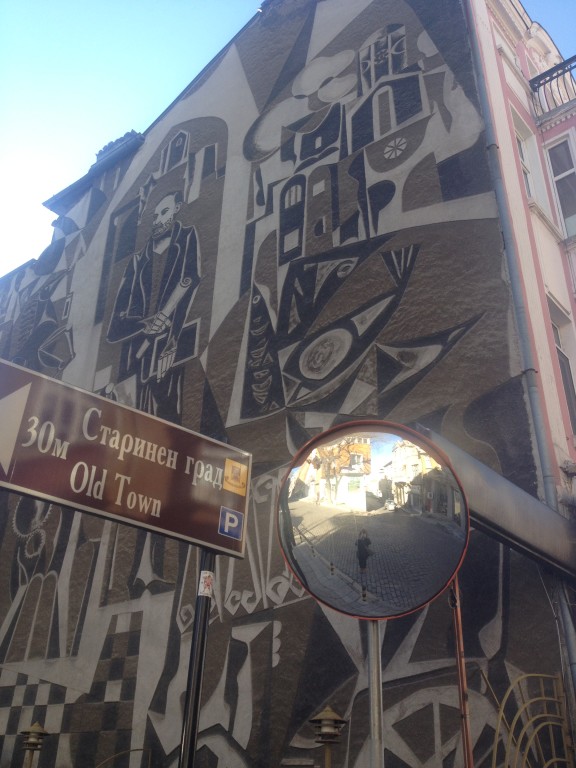 Plovdiv is a little gem that deserves to be known and told.

7 hills just like Rome, pity then that one, the Markovo Tepe, has been “leveled” by the communists during their regime.

The most striking is certainly the Nebet Tepe, about 210 m above sea level, known for the Ruins of Eumolpias, the oldest settlement Trace, which offers an overview of the entire city until the Maritsa river, and also why in its slopes there’s the old town, a group of beautiful and colorful homes, built in symmetrical style during the period of the Bulgarian Renaissance, in the second half of 800. 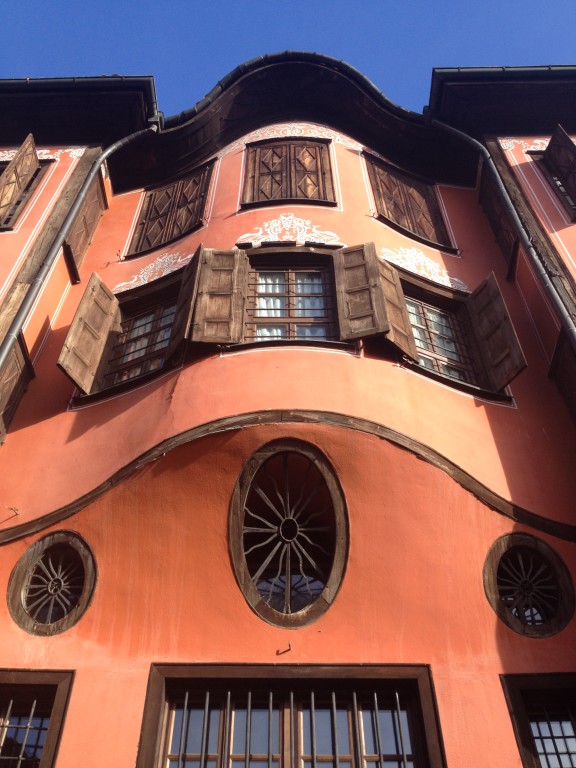 Plovdiv, symmetrical house from the period of Bulgarian Renaissance 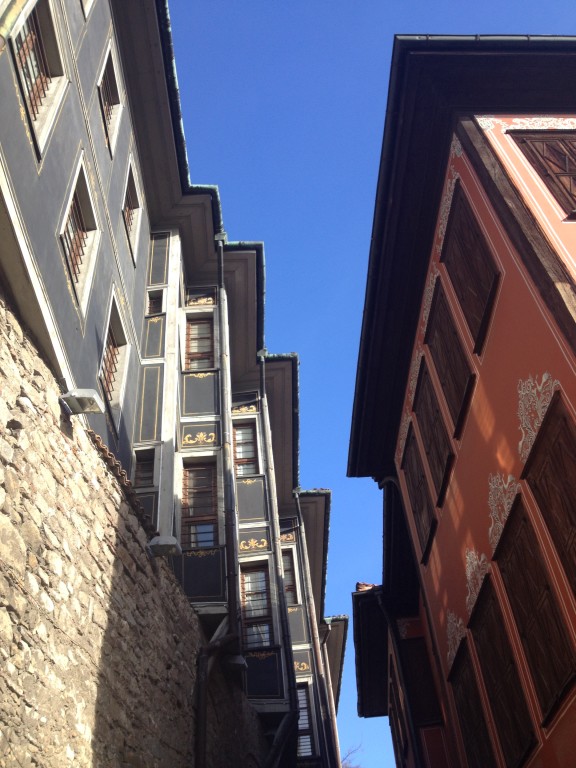 Impossible to visit all of them, if you want to have an idea of the interior and of what was the life in Plovdiv during the Renaissance you can do the visit (highly recommended) of the Ethnographic Museum, the home of a wealthy merchant greek, Agir Koyoumdjioglou, today a permanent exhibition of the uses and customs of Bulgarians. 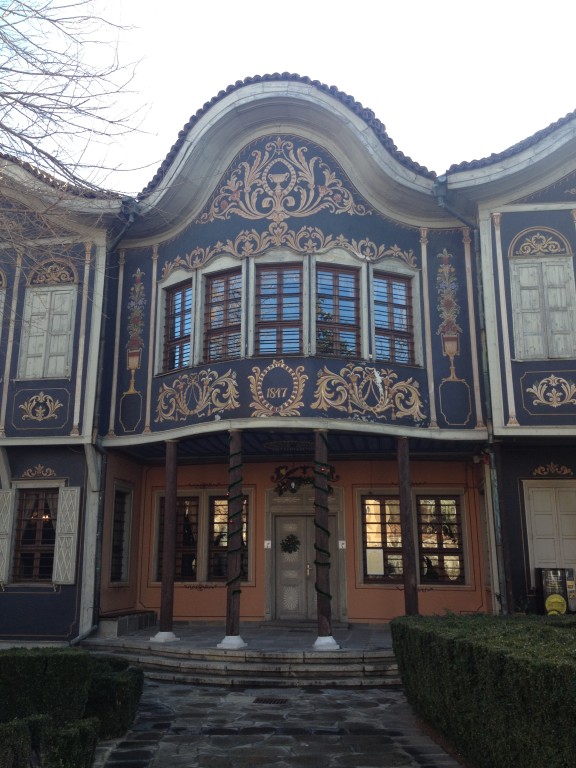 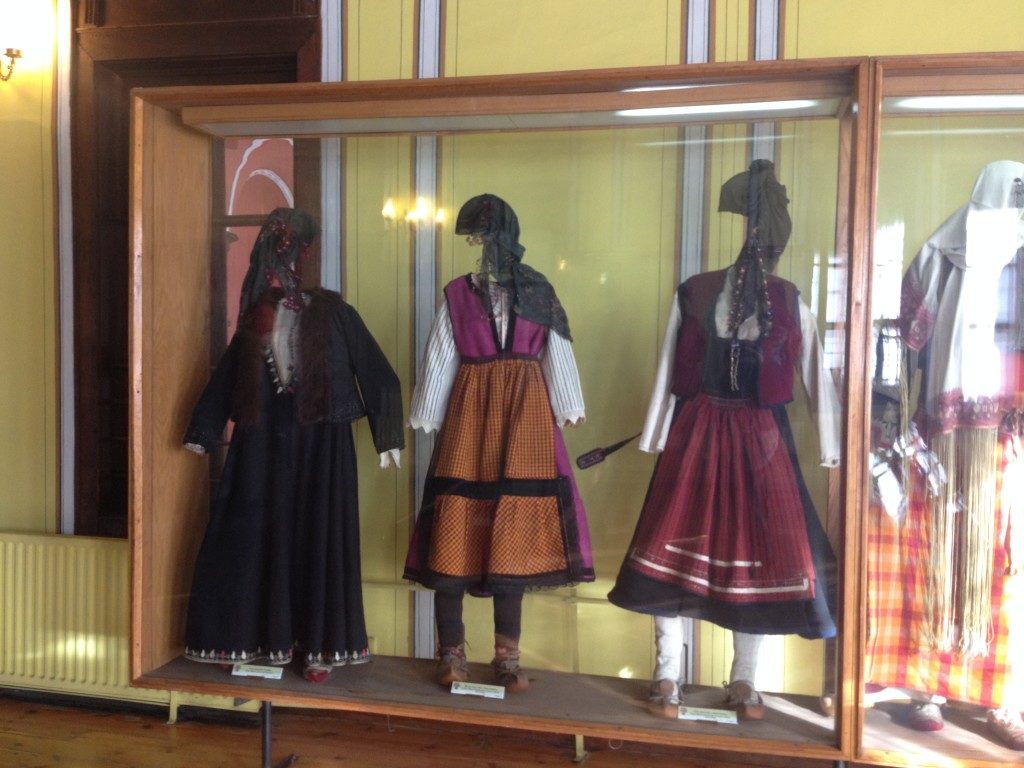 Plovdiv, inside the Ethnographic Museum 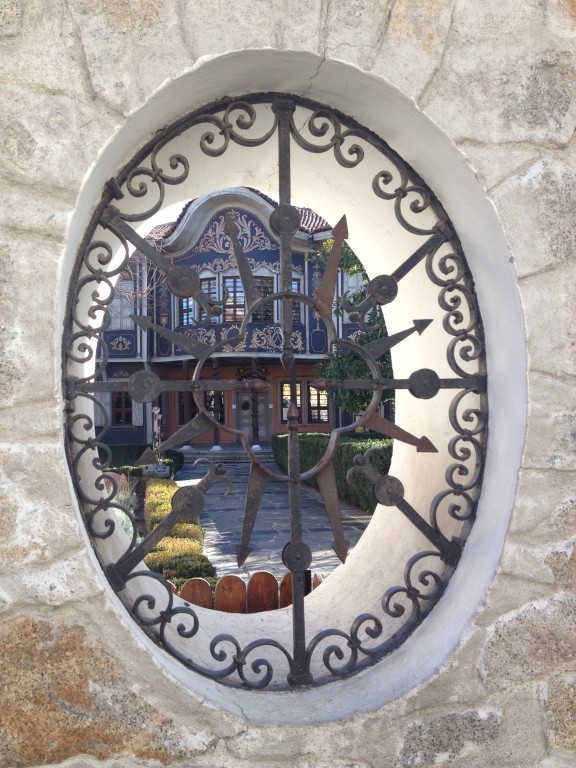 Do not forget to stop at the intersection south out of the perimeter of the garden to admire (and photograph) the angle of gossip, a tower with a slit through which the ladies of the house, unable to get out, used to inquire of external events. 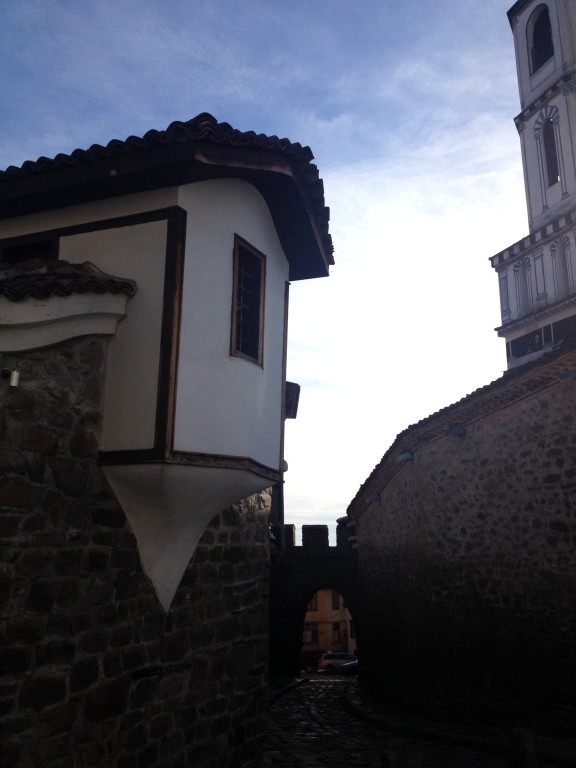 Plovdiv, the “angle of gossip”

Not far from the Ethnographic Museum you can find the Church of Sveti Konstantin and Elena, the oldest of Plovdiv, dedicated to Constantine the Great and his mother who introduced Orthodox Christianity as the state religion and the at the end of the old town you can visit the Church of Sveta Bogoroditsa. In both you can admire frescoes and valuable icons miraculous. 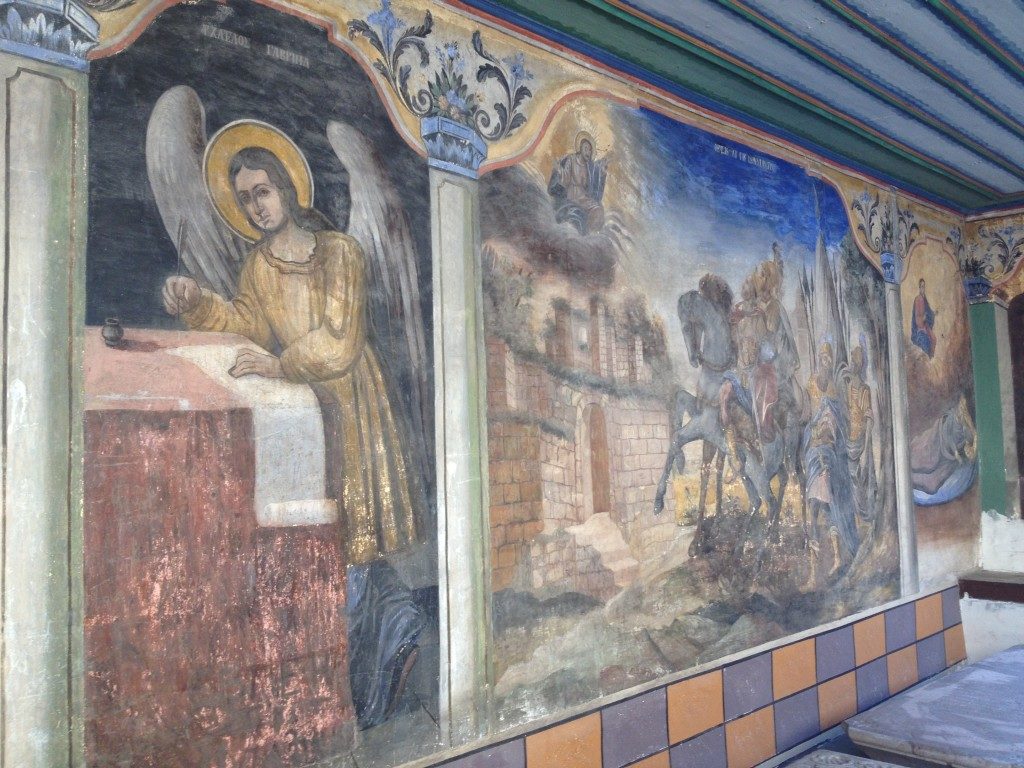 Plovdiv, frescoes from the Church of Sveti Konstantin and Elena

A curiosity, the steeples of the churches of Plovdiv, very high and often conflicting, are made all after the period of Turkish rule.

It seems that during this period it was absolutely forbidden to build sacred buildings (already poorly tolerated as Orthodox) which exceed the height of the mosques.

One of the most surprising thing of the path that leads to the “lower city” is certainly the old Roman Theatre. 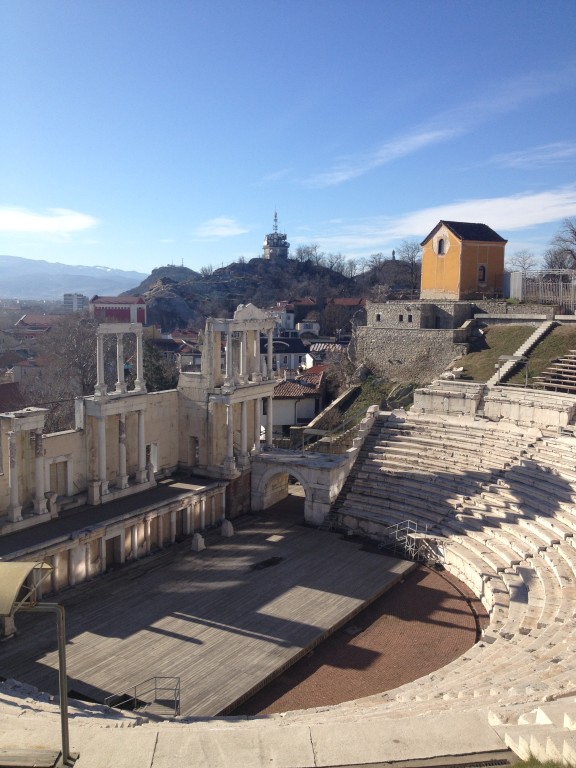 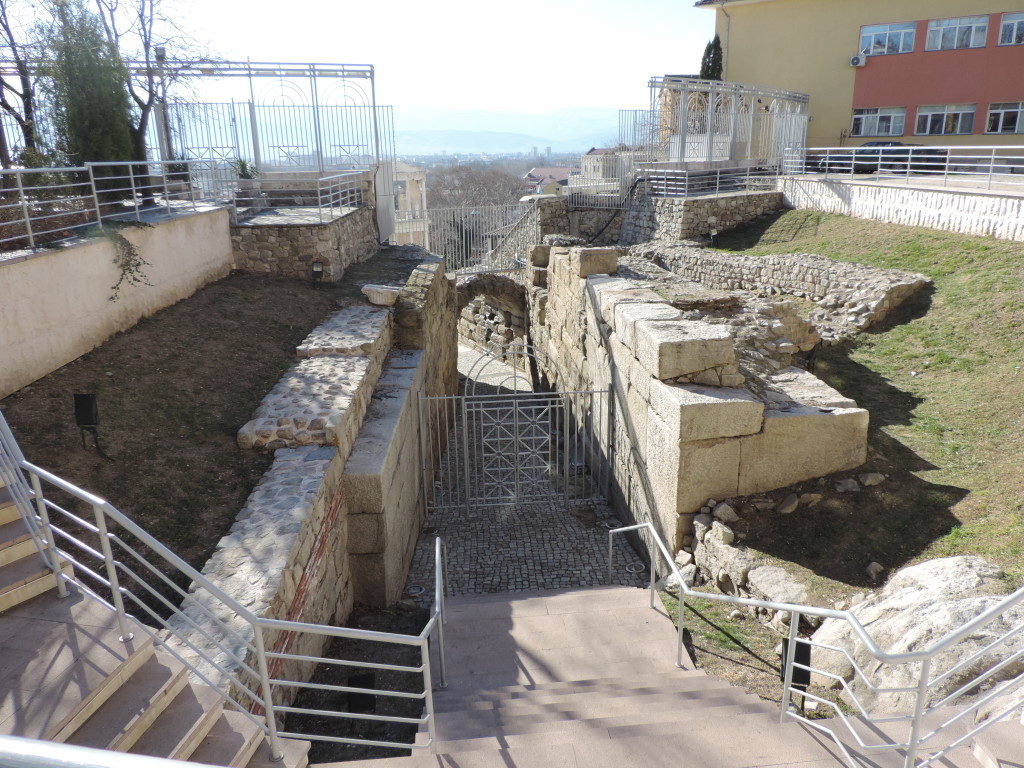 Beautifully set on the hill in front of the old city, this “cavea”, perfectly preserved, built by Emperor Trajan in person, was discovered by chance in 1972 following the landslide of the hill.

The entire theater was slowly returned to its original splendor and now, thanks to its unique location, is used for shows, events and summer concerts. The view from the stands on the valley is amazing.

The Dzhumaya Mosque, one of the oldest in Eastern Europe with its 23-meter high minaret dominates the square at the beginning of the pedestrian area of the lower city.

The real surprise comes when turning your eyes towards the way Knyaz Aleksandar, the most famous pedestrian street of the city, you can see below the road surface, perfectly incorporated in the construction above with a brilliant recovery work, an authentic Roman Stadium. 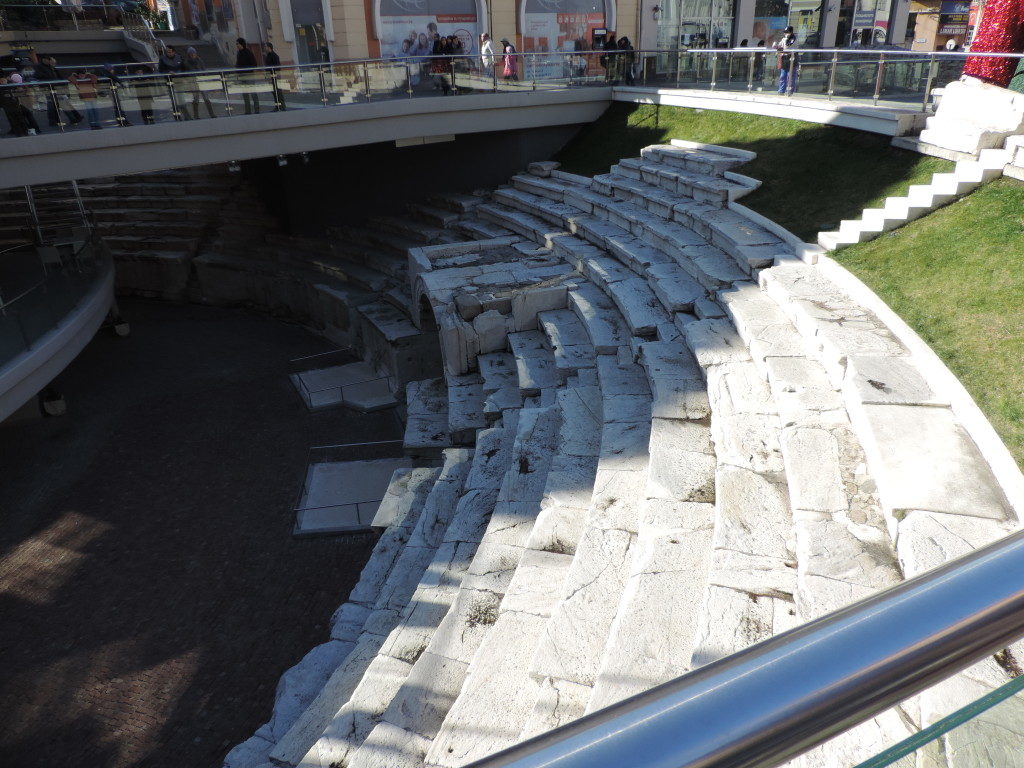 A structure which dates to the second century A.D. can accommodate more than 30,000 people, used over the centuries for gymnastic competitions, for chariot races, and finally as the Roman circus for the struggle of men and animals.

It’s possible to visit a section of the bleachers and the underground.

Plovdiv does not end here.

An endless sequence of house-museums, churches, mosques and art galleries. Impossible to see them and to mention all. Often used by visitors as a stopover to reach Greece or Turkey, a pity given that this fascinating Bulgarian town is worth a visit much more lengthy and thorough.

Plovdiv is far away an hour and a half from Sofia, by bus or train (you can find here the timetables) and also by rental car. The airport is located 12 km. 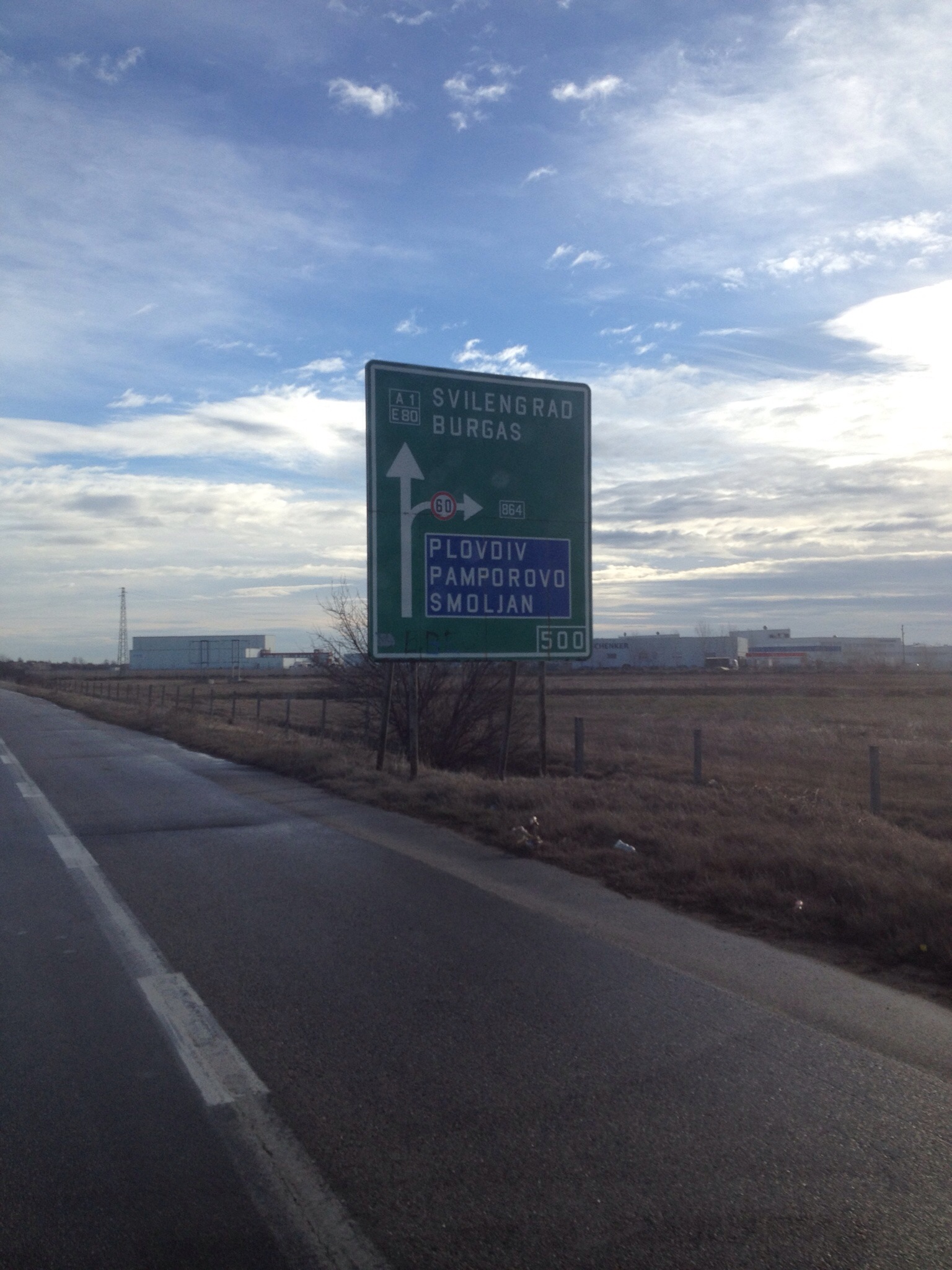 On the way to Plovdiv

Its visit does not need special care, you can discover the city comfortably walk.

The perfect place to stop and eat typical Bulgarian cuisine spending very little is the Dyana restaurant, near the pedestrian street Knyaz Aeksandar. Flow rates are rich and generous, a full meal is around about 8/10 euro for person.