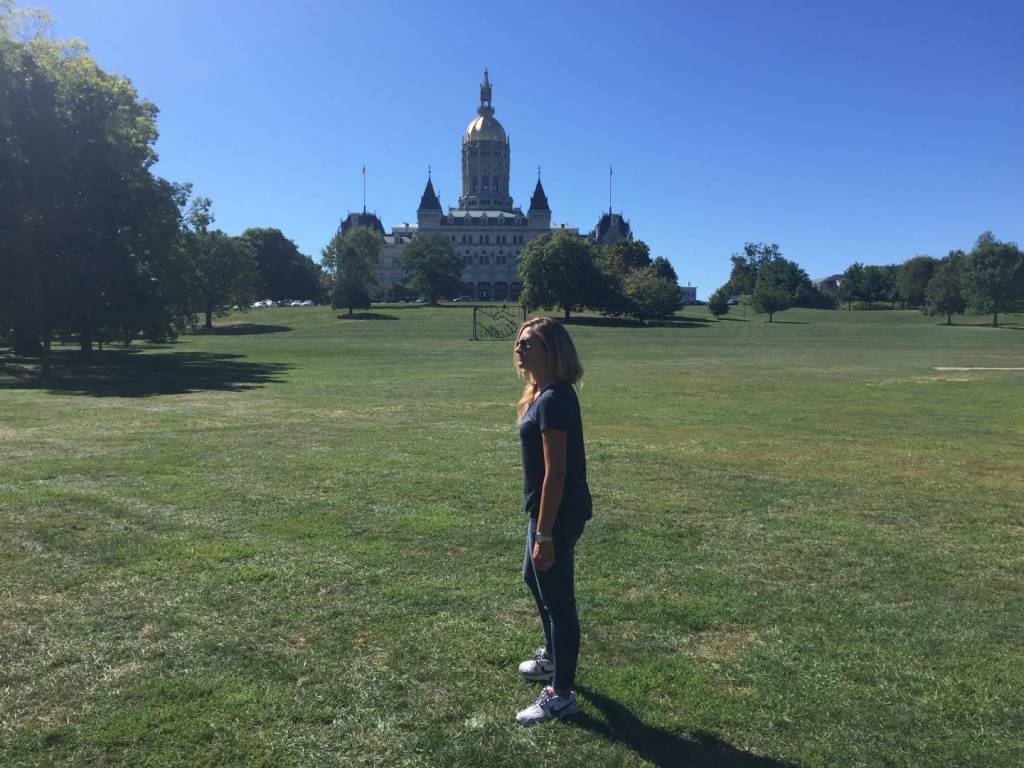 We said there warn’t no home like a raft, after all. Other places do seem so cramped up and smothery, but a raft don’t. You feel mighty free and easy and comfortable on a raft.

Writing about “my” America isn’t always that easy.

Far beyond stories, travel advice and practical information, what comes inevitably into play are emotions and feelings, without which I couldn’t really give a complete meaning to an itinerary or to a simple destination (if you have read my articles, you will know what I am talking about).

My America is fed by passion, different routes and people met along the way.

It is made of special people and places, of a big and old river that slowly flows, carrying memories of a faraway world, and of consumed books. 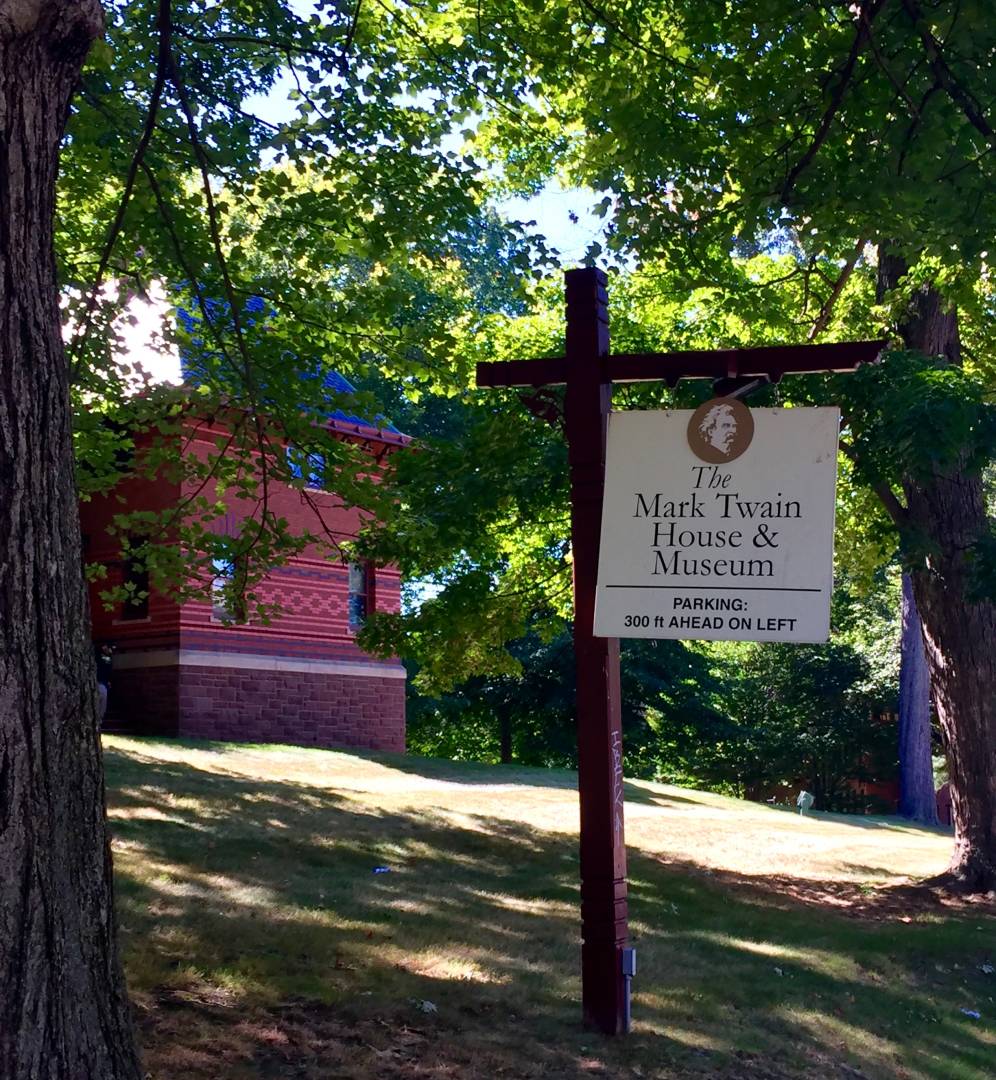 So everytime, with the help of my curiosity and emotion, I find myself discovering and telling stories about aspects of a country that, despite the many travels and years, never stops surprising me, without forgetting of course the breathtaking landscapes of the world’s most impressive natural parks, the great cities and the many miles stacked up running after myths and locations of the old American dream. 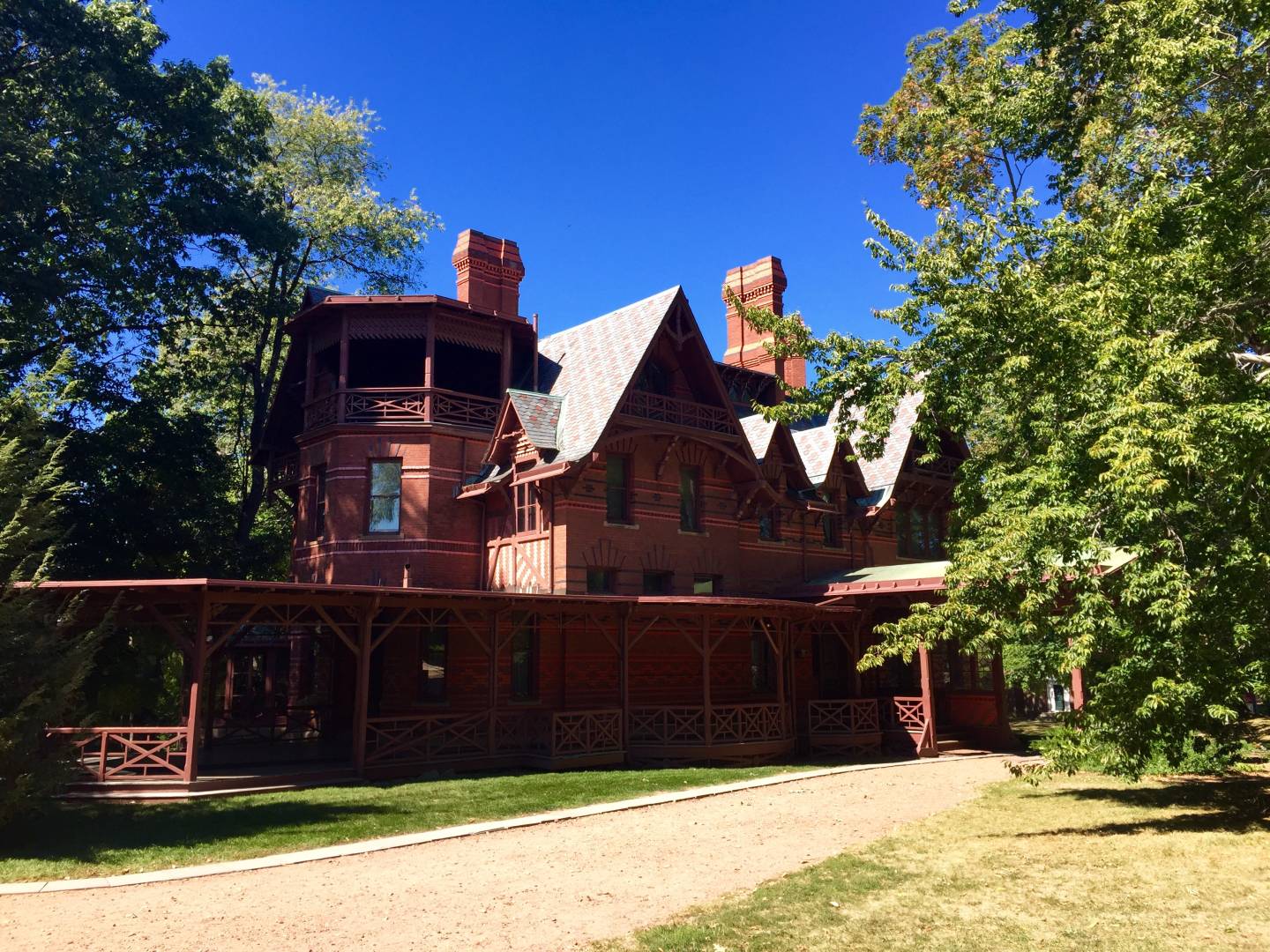 I can’t help thinking of my last journey in the South of New England, of my awaited visit to The Mark Twain House & Museum in Hartford Connecticut and of my astonishment in finding myself unexpectedly touched in front of the desk where all my childhood characters were born, Huckleberry Finn and Tom Sawyer.

Unexpectedly touched also in front of the Harriet Beecher Stowe Center, who gave birth to Uncle Tom’s Cabin, which was the first courageous public condemnation (from a courageous woman) against slavery. 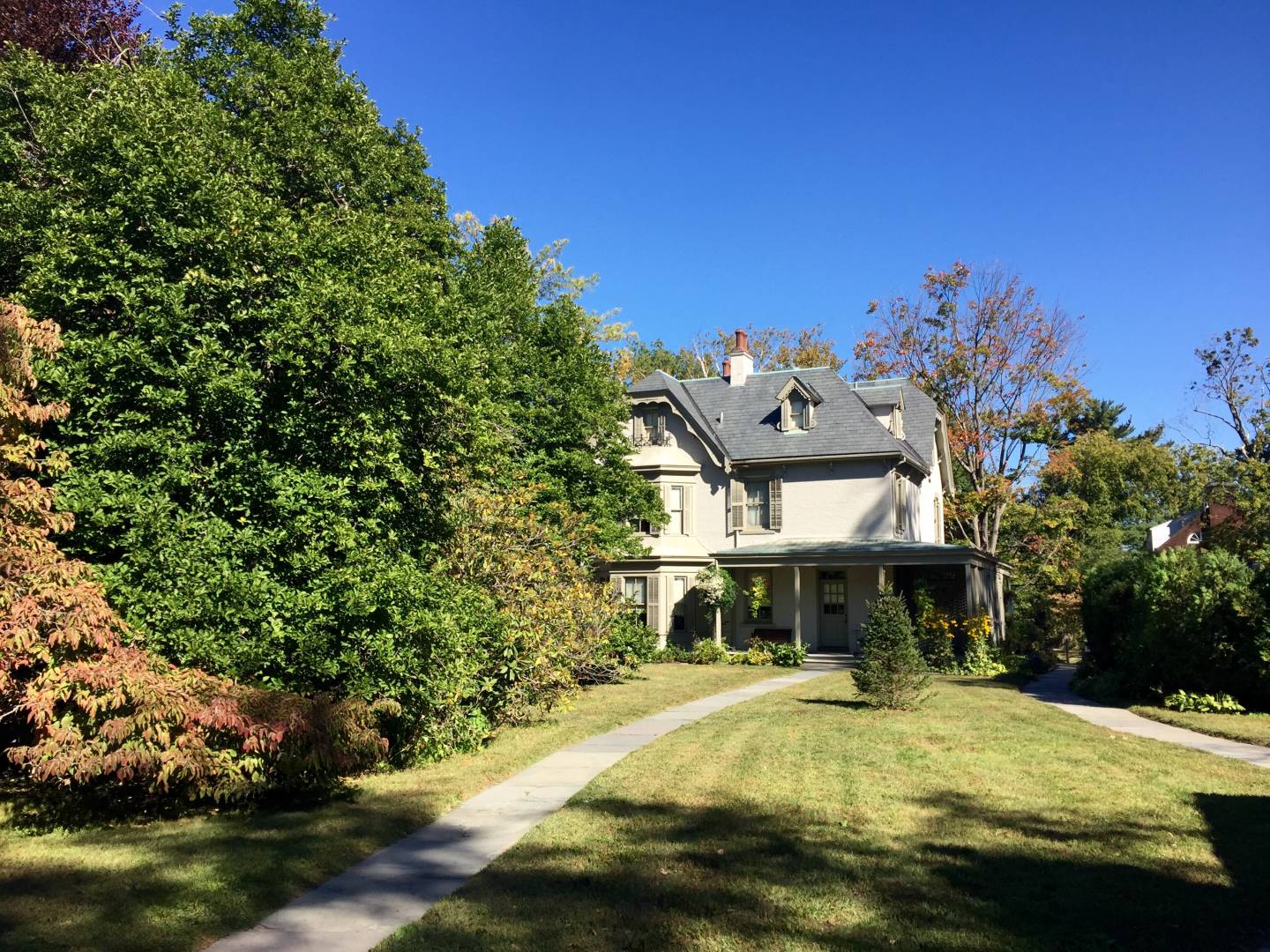 You’ll be asking yourselves why someone should decide to visit these places, in addition to the magnificent scenary they are set in.

My answer is very simple.

After reading even just one chapter of the novels, who among you has never dreamt, at least once in your life, of reliving Tom & Huck’s adventures, of sailing along the Mississippi on board of Huckleberry’s raft, of painting a fence with Tom Sawyer, of offering a safe shelter to poor Uncle Tom, in a world still made of prejudice and slavery? 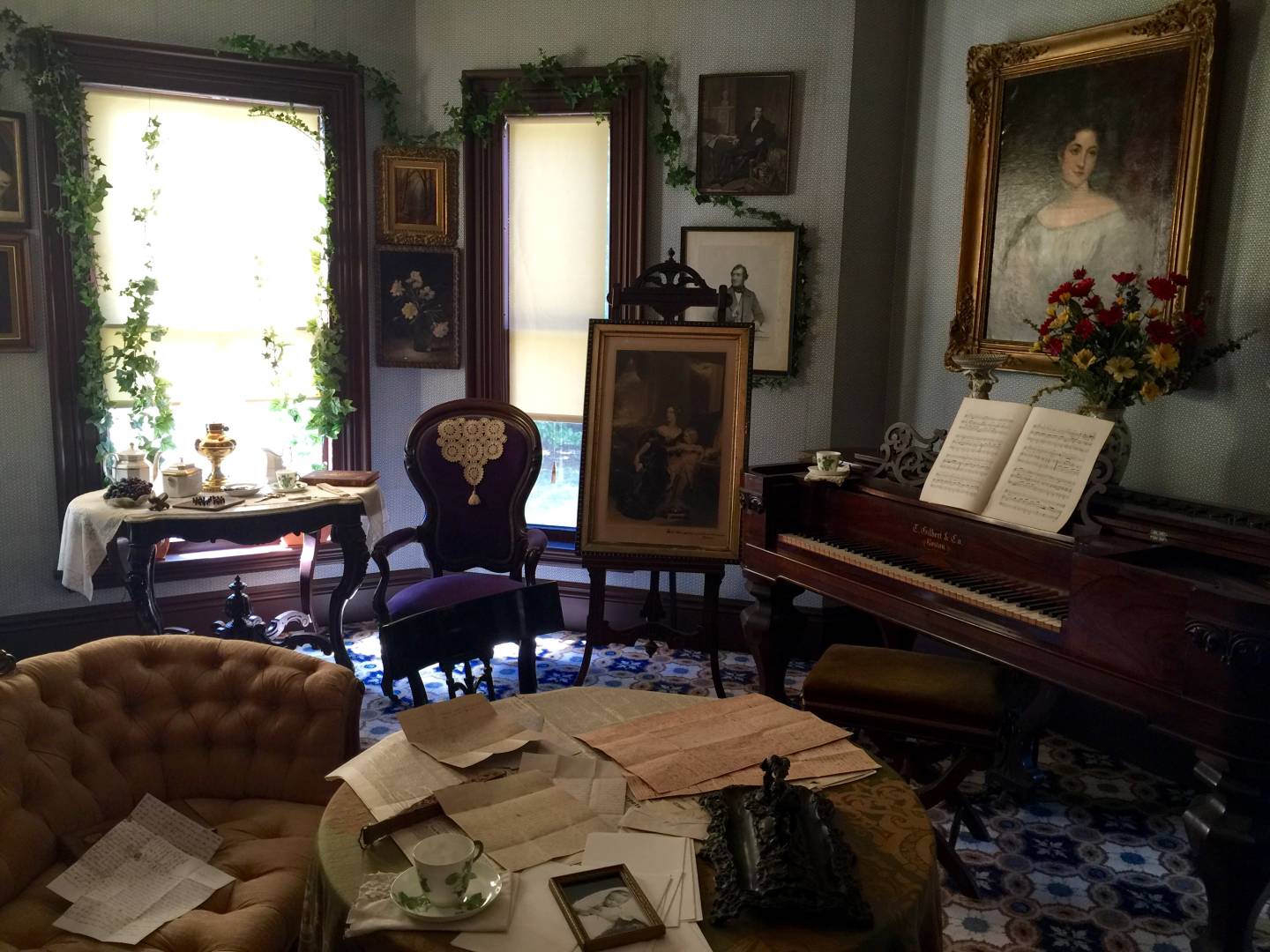 The two house-museums, which are by chance one in front of the other, tell so many things about their owners, Mark Twain and Harriet Beecher Stowe and of their strong bond of friendship and respect.

In their own personal way, they are narrators of a fundamental part of American history and convinced abolitionists who faught their battles against slavery using inkpots and caustic words, raising attention and criticisms on a topic which hadn’t been discussed much up to then. 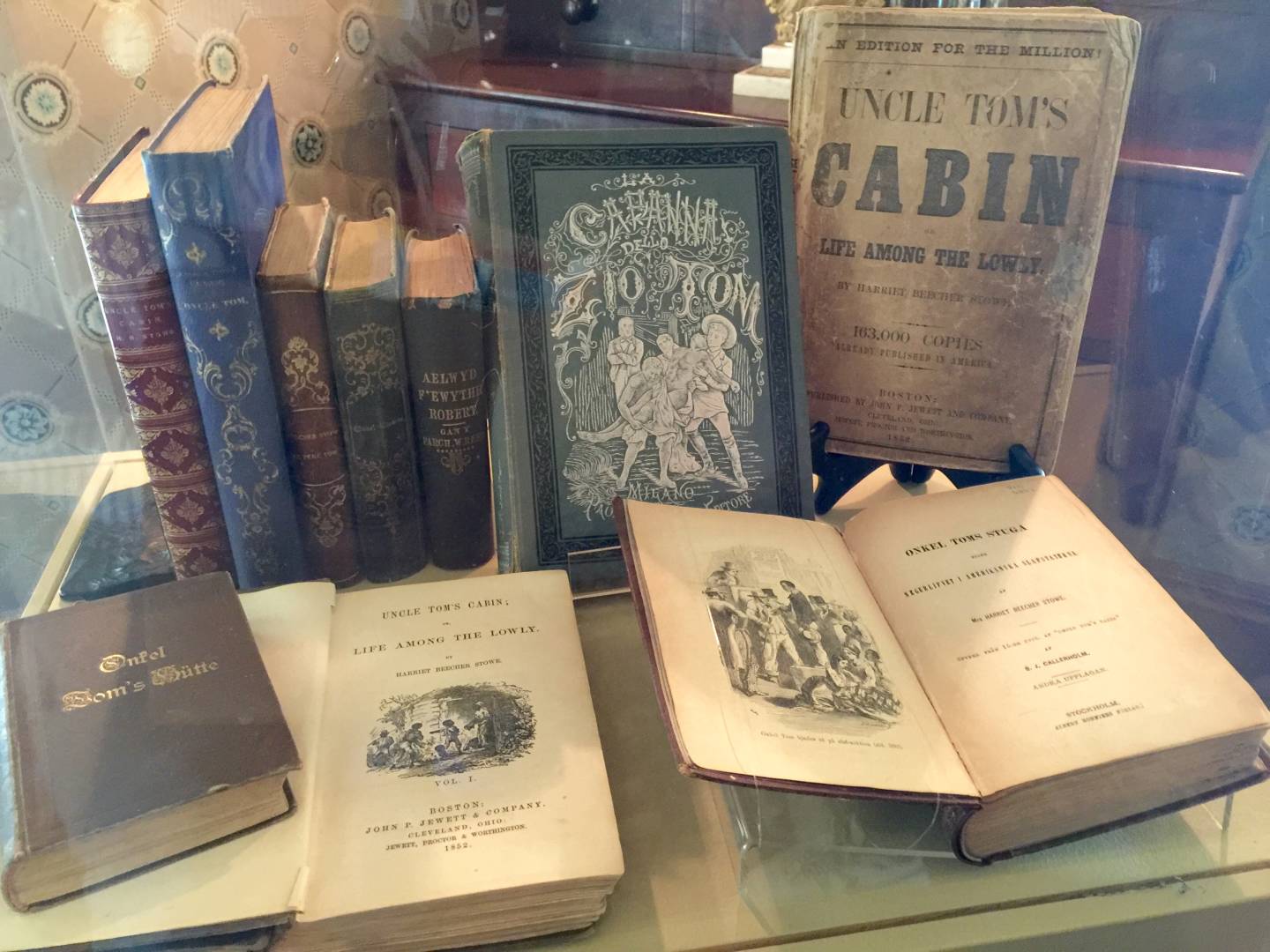 The complex, in the top list of what to see in Hartford, is west from the center, at 351 of Farmington Ave, in one of the oldest parts of the city, near the Connecticut Historical Society.

You can buy package tickets for both houses and the museum, taking the advantage of useful detailed guided visits. 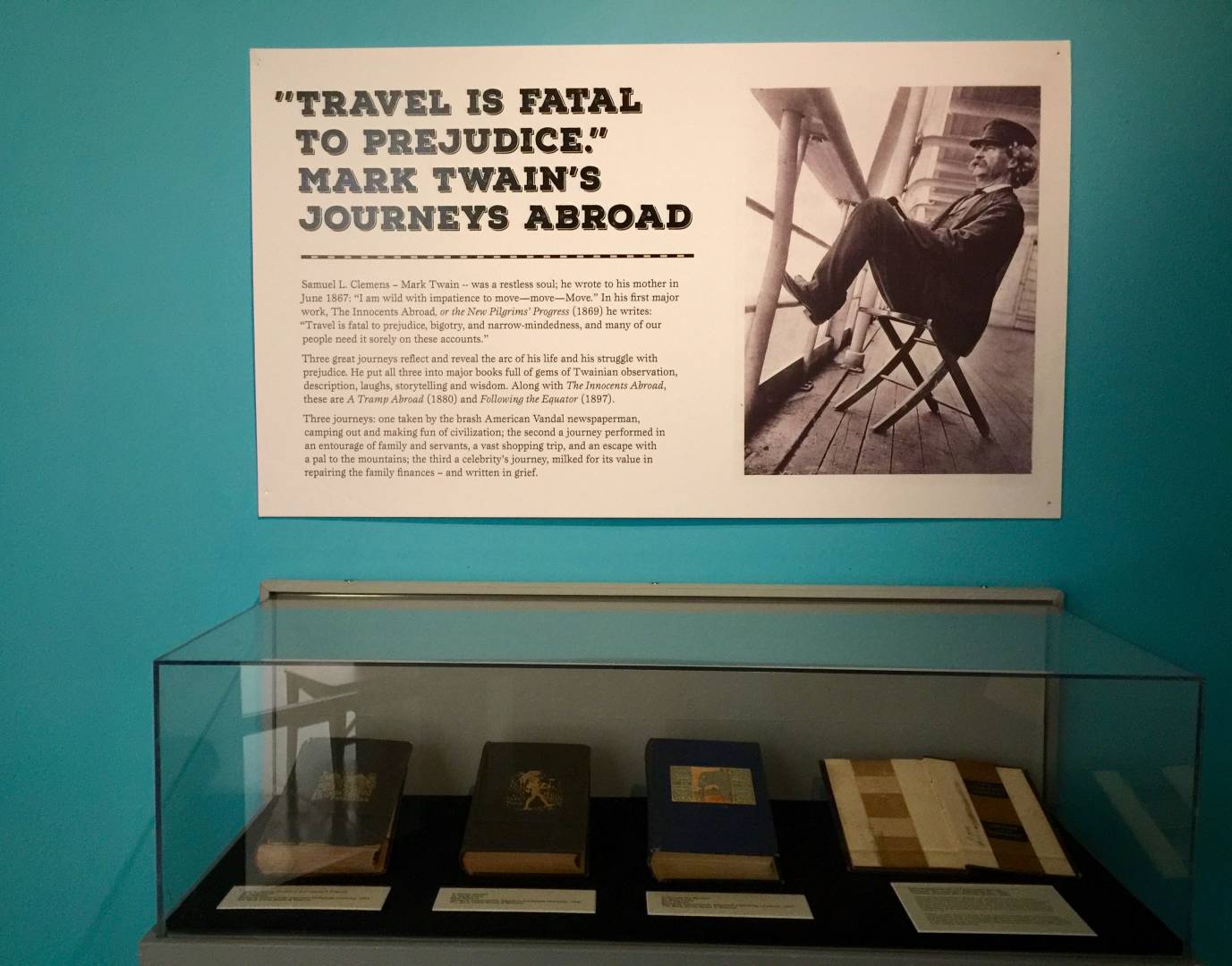 It is a picturesque victorian building of gothic inspiration and in its bizarre exterior structure it brings to mind those typical steam boats that used to sail up the Mississippi in the 1850s (to some, it’s not a coincidence), those that Mark Twain loved so much and where he spent a short but intense part of his life.

Entering that house, where Mark lived his most creative and happiest 17 years of his life, both for a familiar and literary point of view, is like barging into his everyday life and peeping from the keyhole to discover thousands of features of one of the most eccentric and brilliant men in the history of America.

Kimberly Stokes Beal, the tourist manager of the museum, offered me stories, hints and incredible facts. 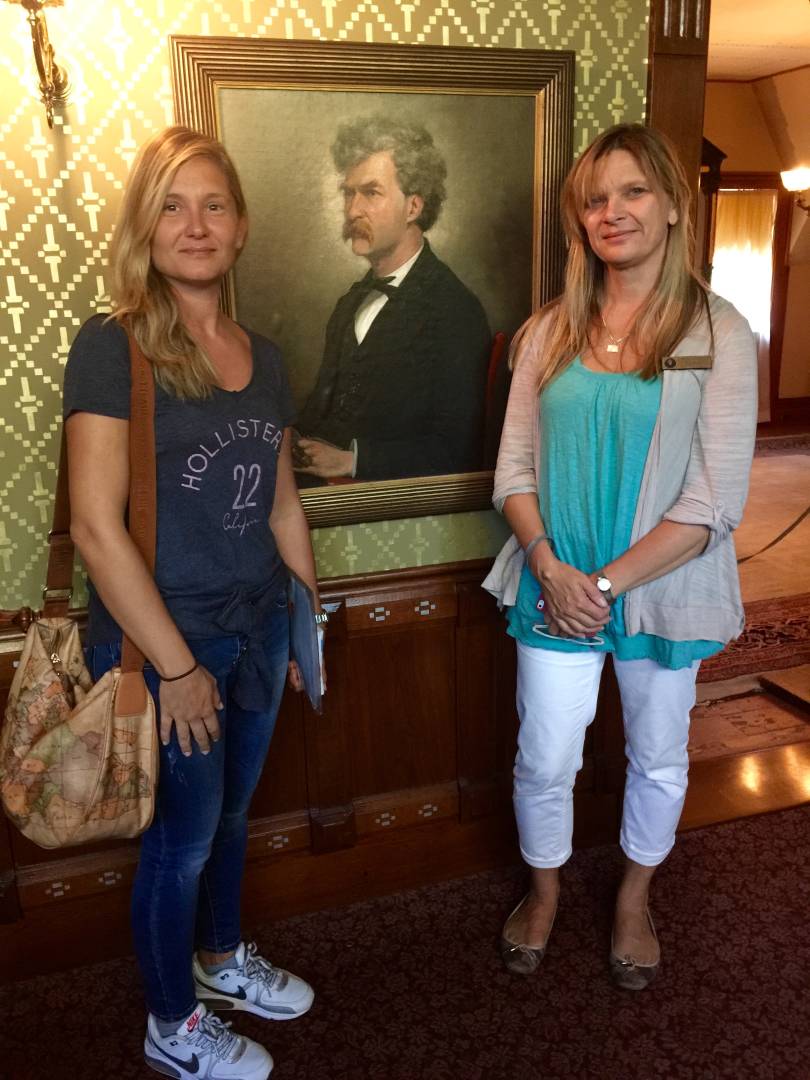 With Mark and kimberly, inside the house

The interiors are unusual, at times eye-catching and disturbing, but still everything in his mind seems to have a defined order, as if the members of his family are still there ready to jump out at any moment, interested in the continuous flow of tourists and ready to disappear up the grand wooden staircase in the middle of the entrance. 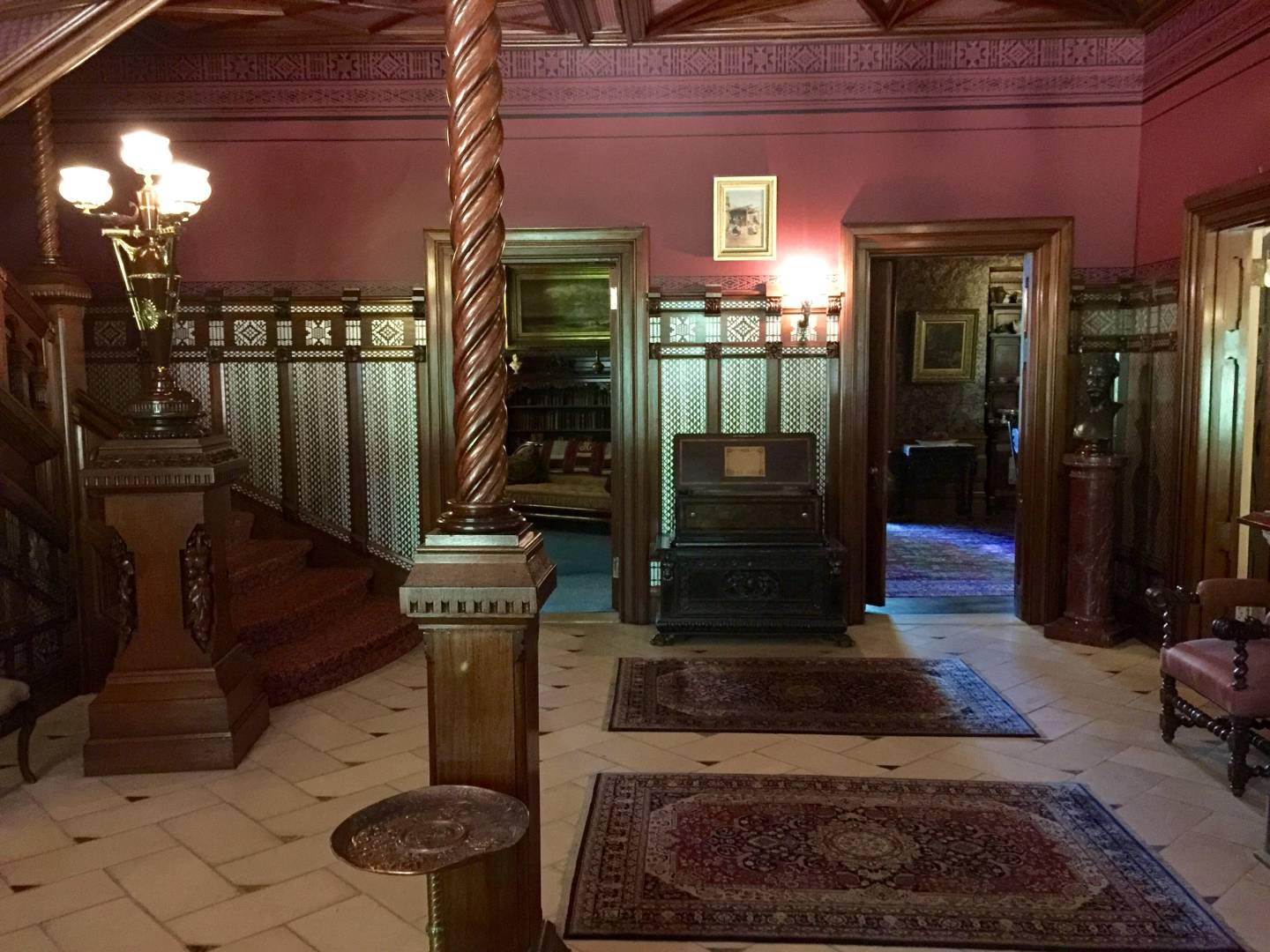 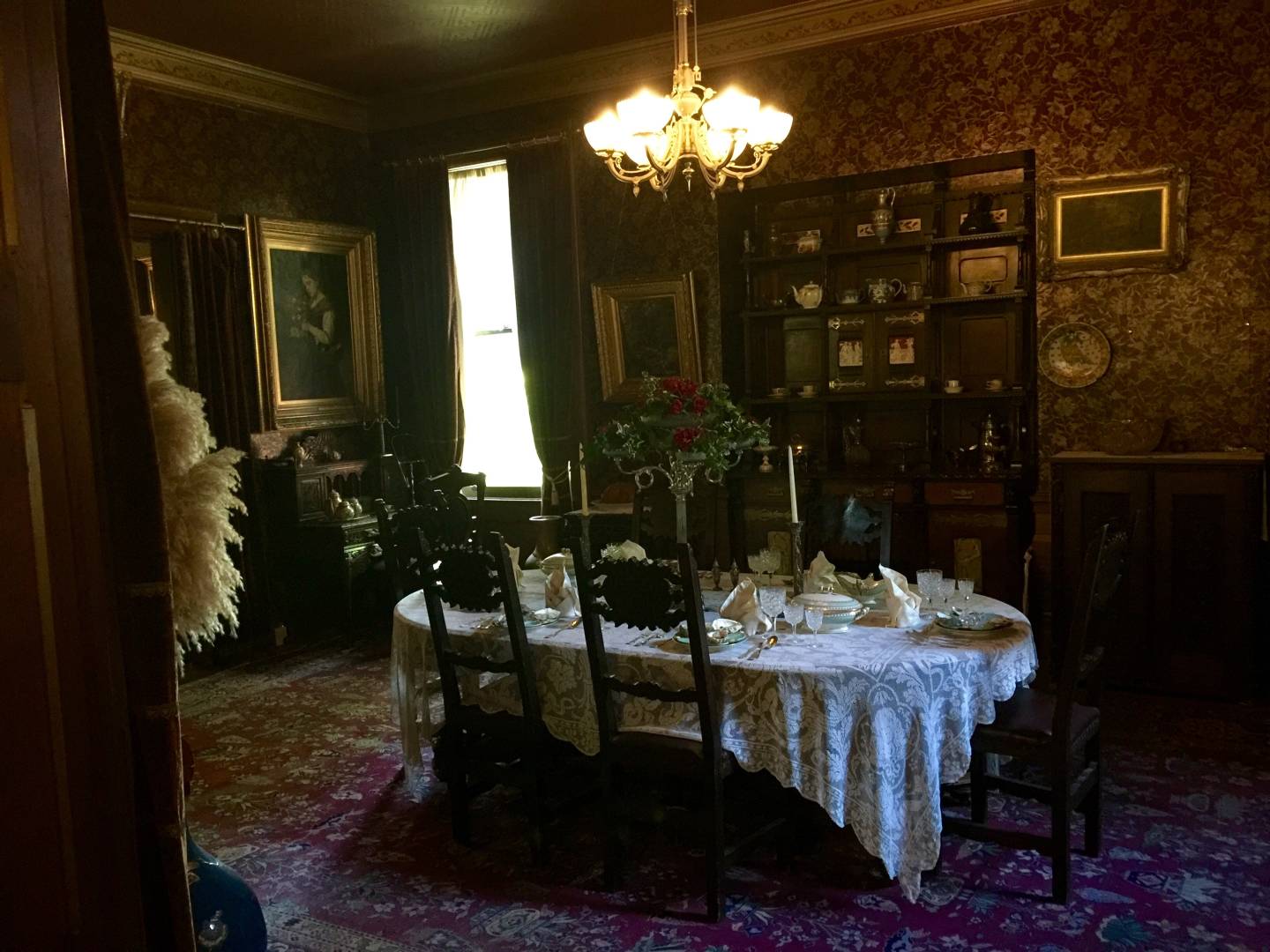 The dining room, the Tiffany lamps that were created on purpose for Mark’s house, the bright veranda that almost has a lightning function for the beautiful library with the carved fireplaces, the second floor rooms (Twain’s room is on this floor) and the billiard room on the third floor, probably the most incredible place in the house. 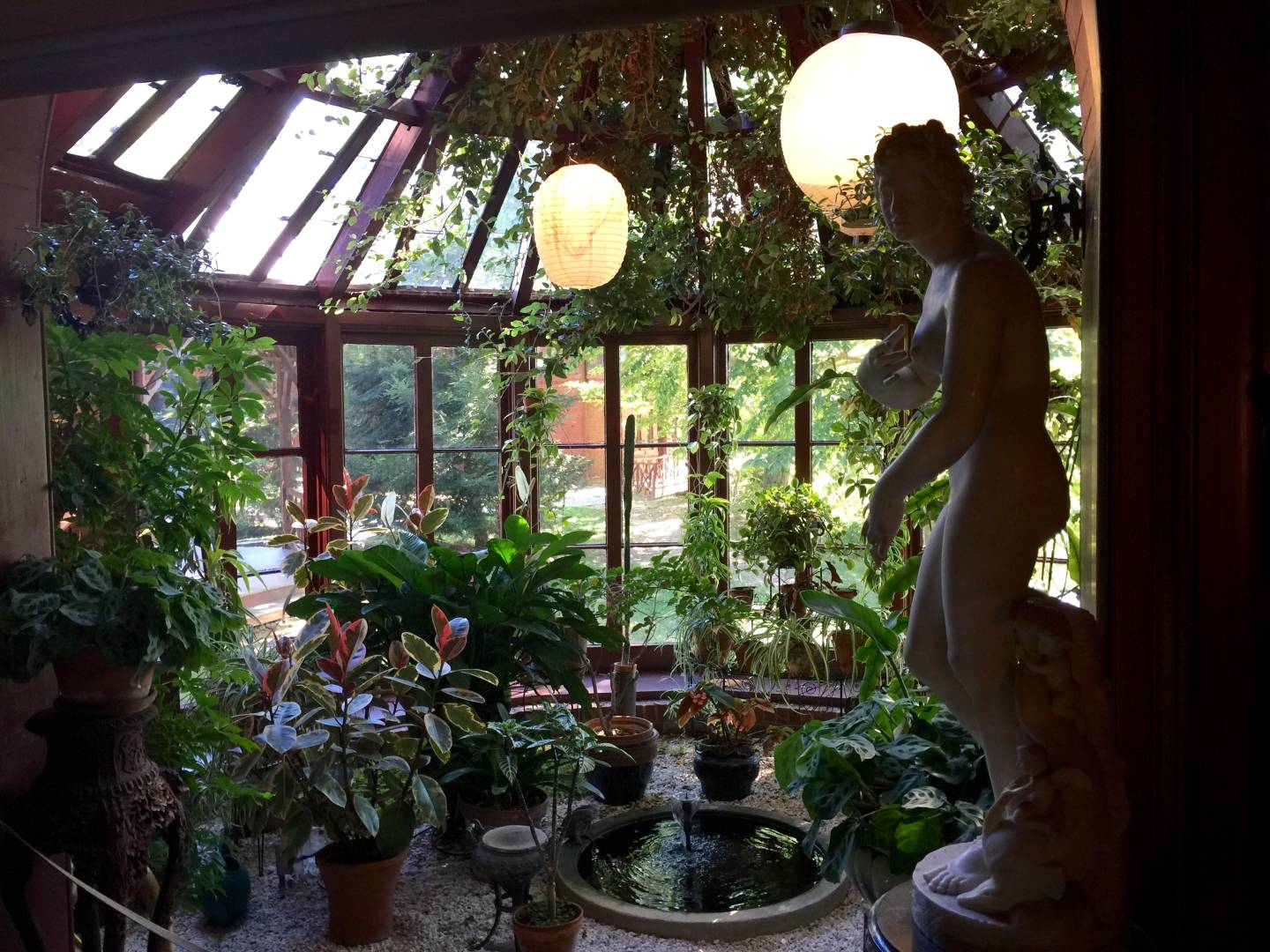 In the corner at the end of the room, after the billiard, Kimberly shows me a little mahogany desk, covered in yellow sheets of paper kept still by a heavy ink pot.

Then smiling she says… this is the corner where Samuel Clemens (Mark’s real name) would become Mark Twain to give life, thought and voice to his characters and yes, to your beloved Huckleberry Finn and Tom Sawyer. 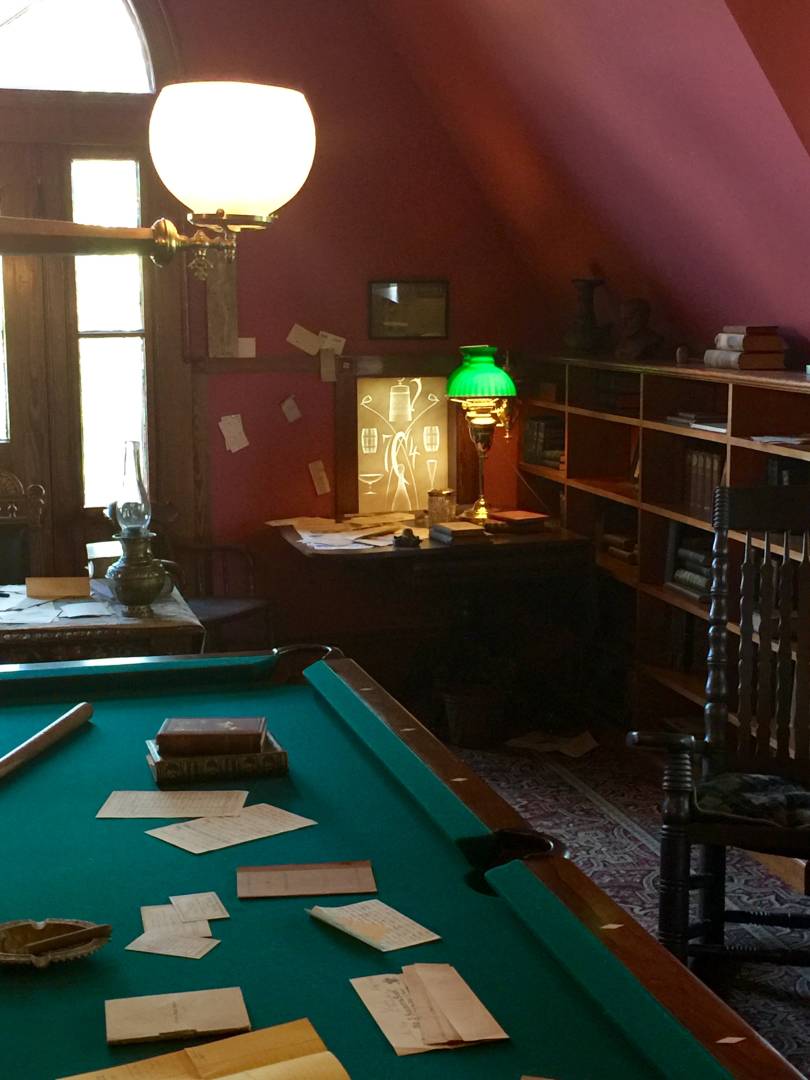 The billiard room and at the back, Mark Twain’s desk

Arisen emotions and sensations are written here among these words or, even more, in the picture here below, which was taken shortly after. 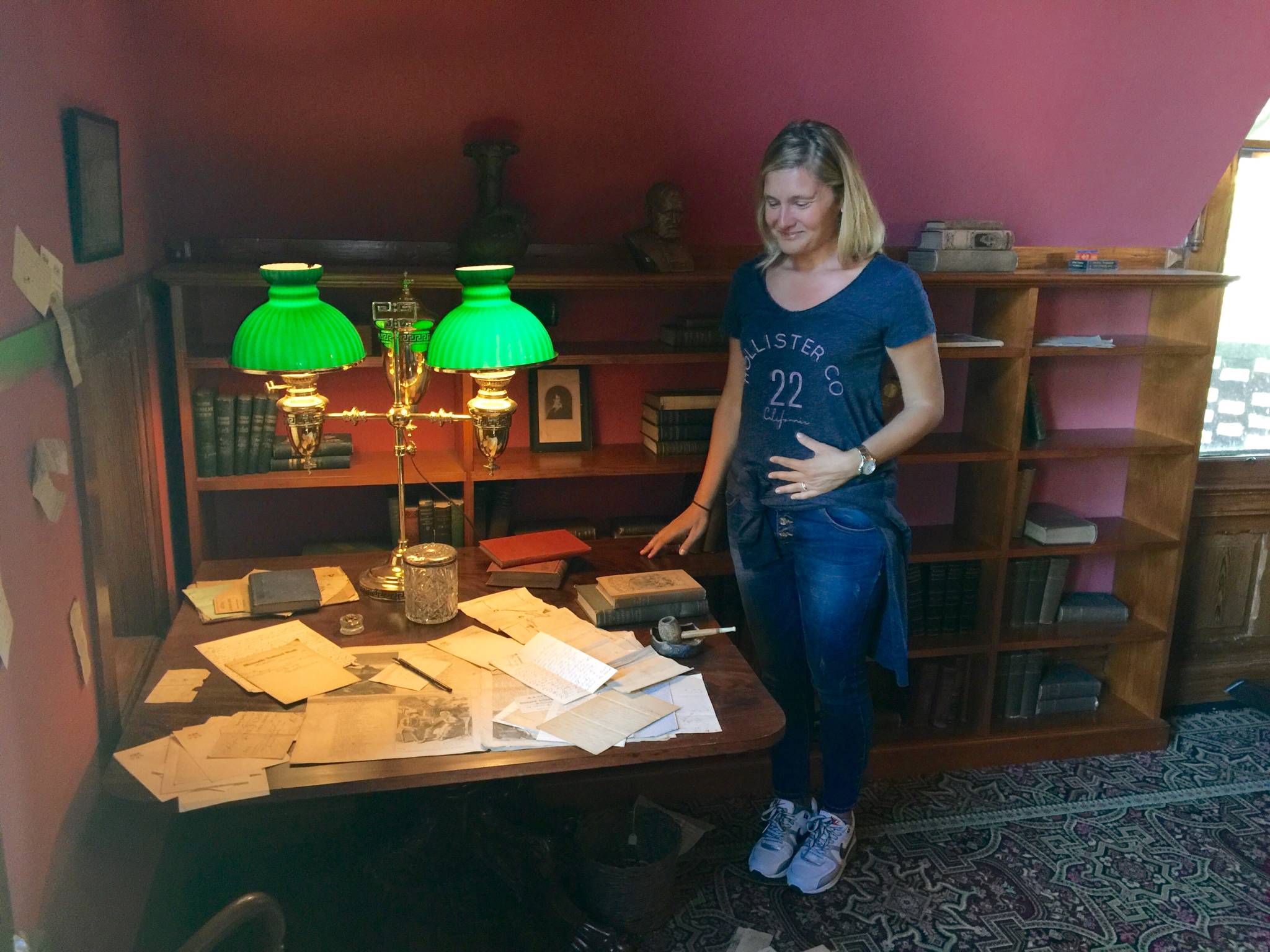 In front of Mark Twain’s desk

So you’re the little woman who wrote the book that started this great war!

These seem to be the words spoke by President Abraham Lincoln during his encounter with Miss Stowe, the author of the famous Uncle Tom’s Cabin. 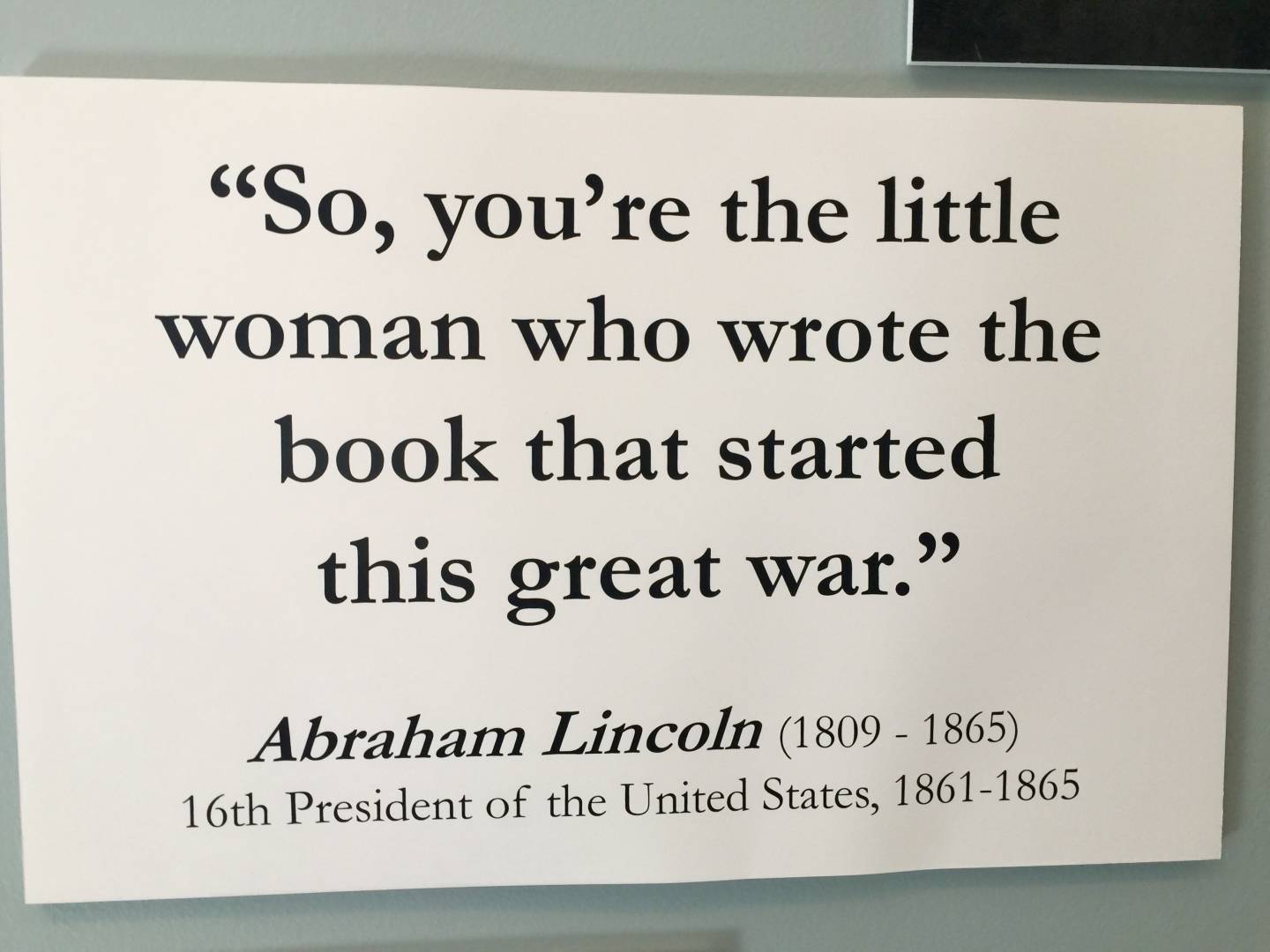 Lincoln’s words at the entrance of Stowe’s house

This anti-slavery novel, telling the sad and disgraceful facts of the slave Tom, shook the opinion to the point that even Lincoln was committed in doing anything possible to abolish slavery (so they say); one example of this is the terrible Secession War, which events are told in another great historical novel, Gone with the Wind.

This eighteenth-century building tells the everyday story of an extraordinary, simple, normal but courageous woman. 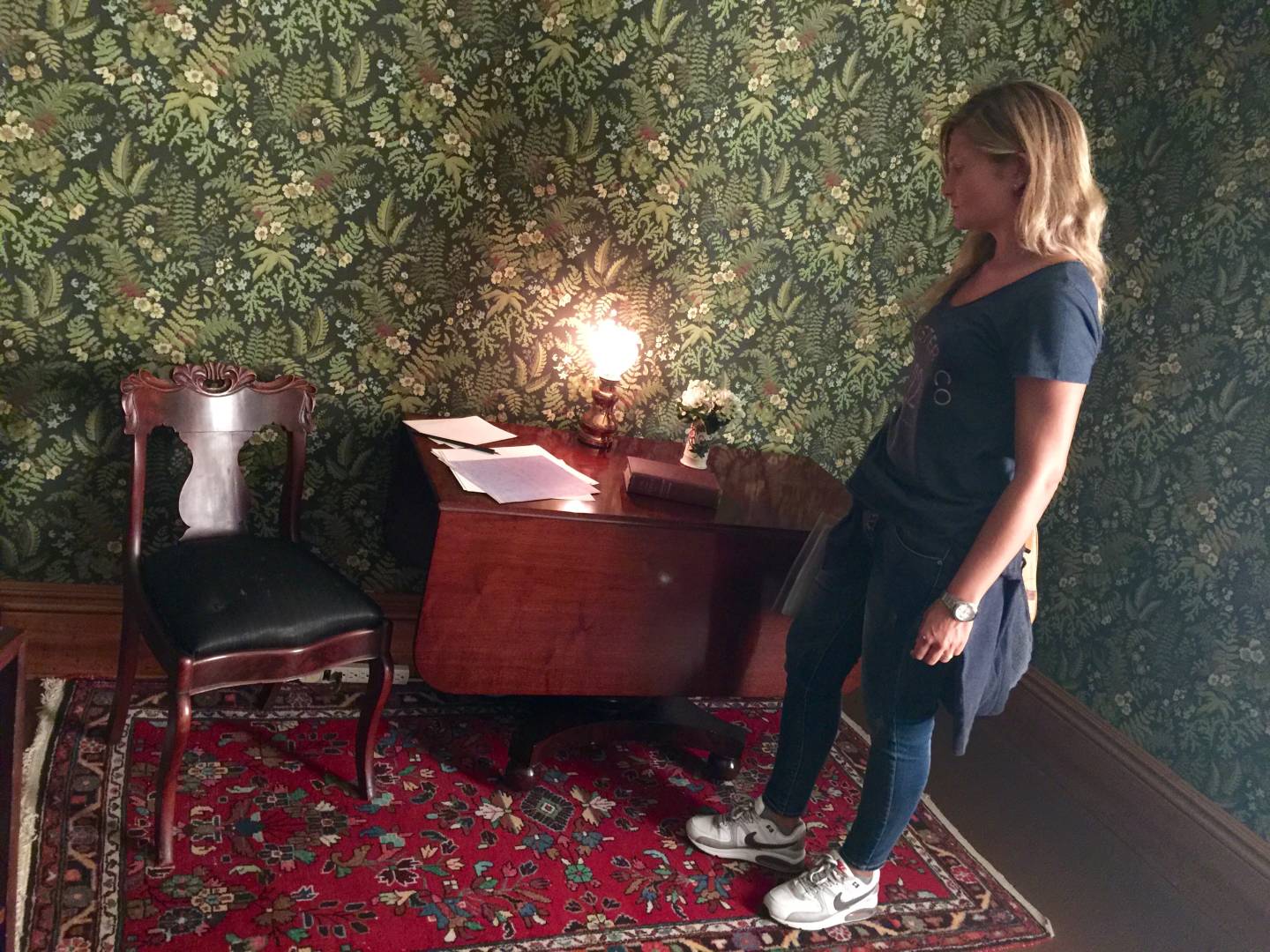 The guided visit doesn’t only show you the rooms and objects (you can see several first editions in the original versions, among which the 1852 Italian version), it also stimulates visitors to participate and interact on the themes of slavery and racial intolerance.

This creates a link between Stowe’s times and modern times which are surely more civil but still difficult, letting the visitor to think on the disturbing modernity of these themes. 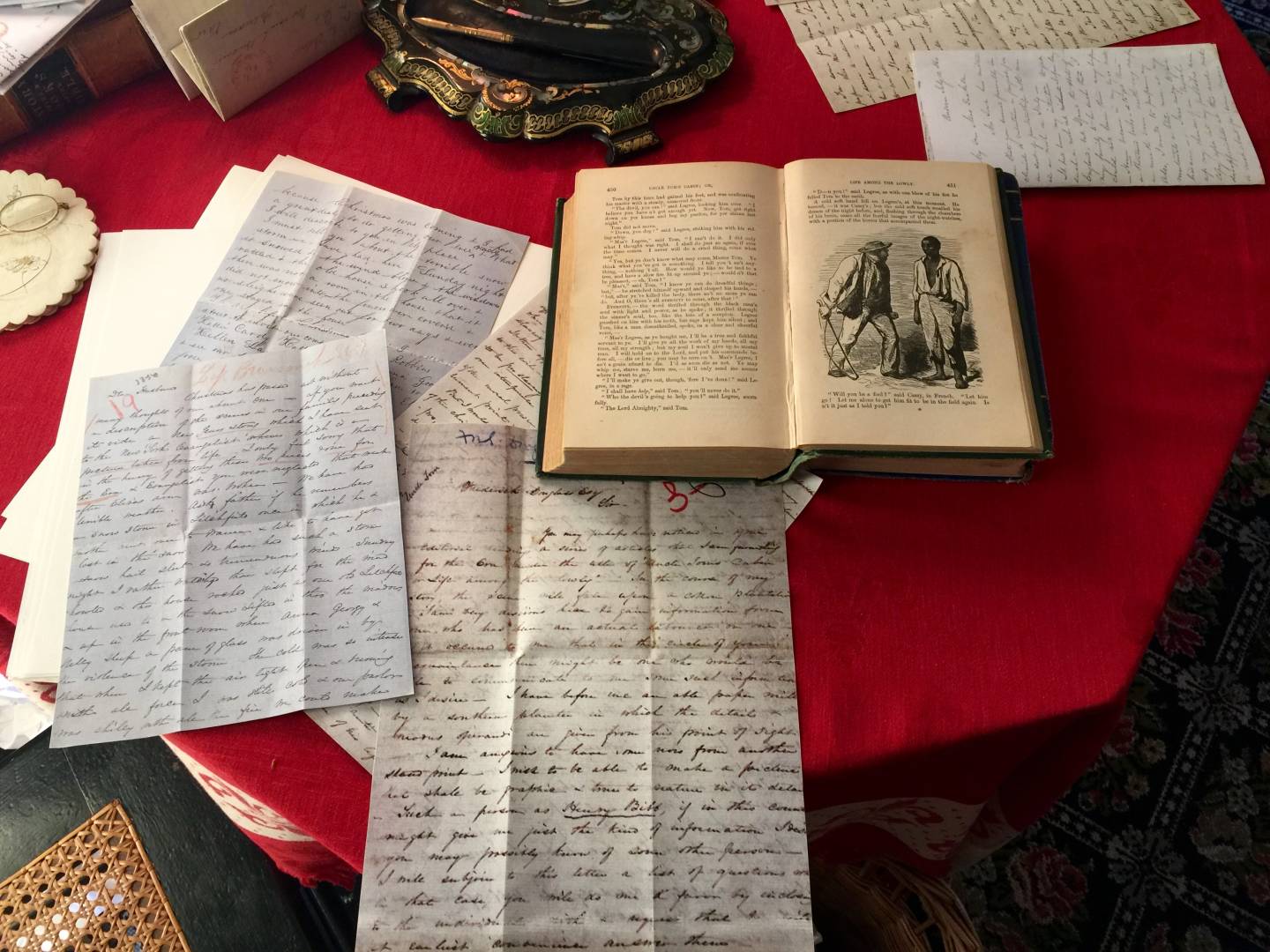 Ah, how true are the great, eternal words: “You can not keep any free nation in which freedom is a privilege and not a principle”