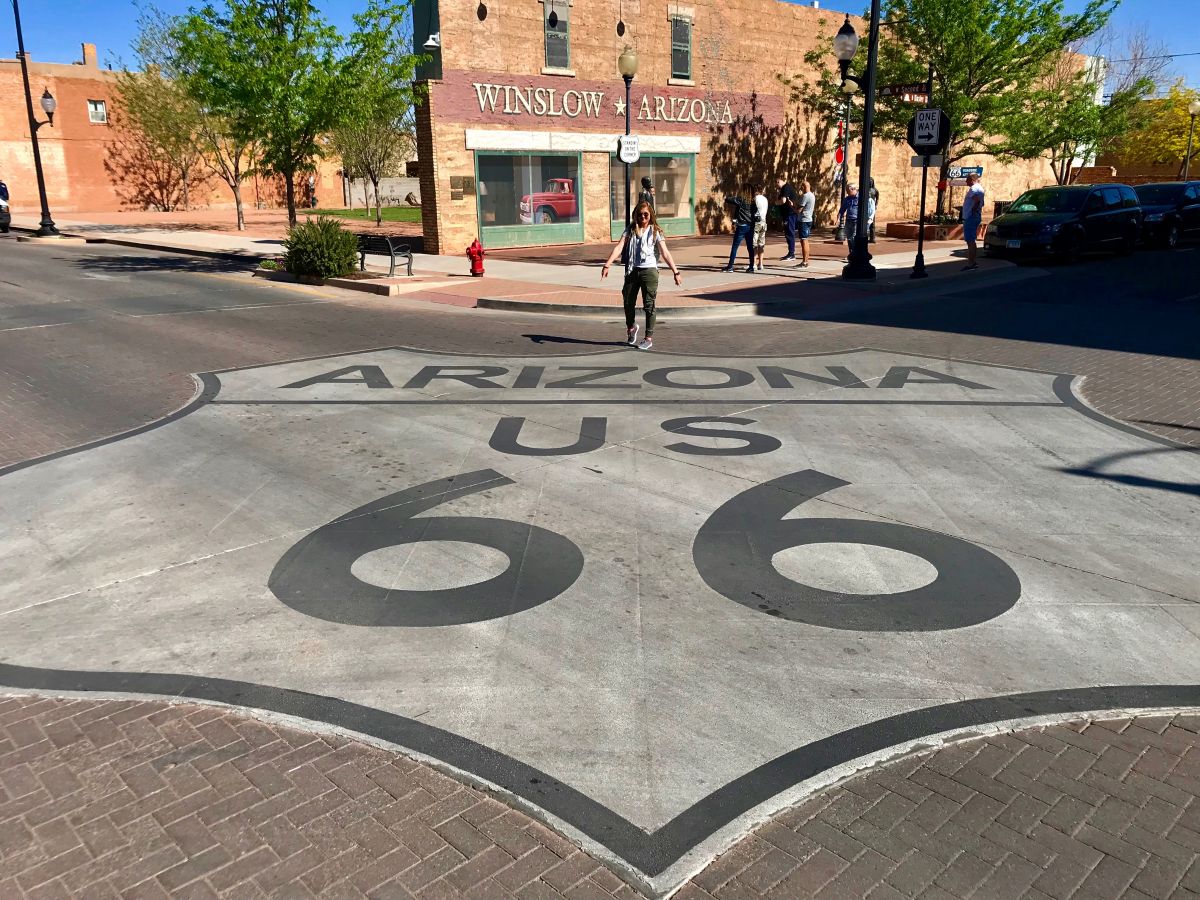 How to plan a journey through the U.S. Route 66?

According to what criteria can we select stages, detours and stays overnight?

How can we follow the original path and above all how much time do we need to manage the distance in kilometres at its best? 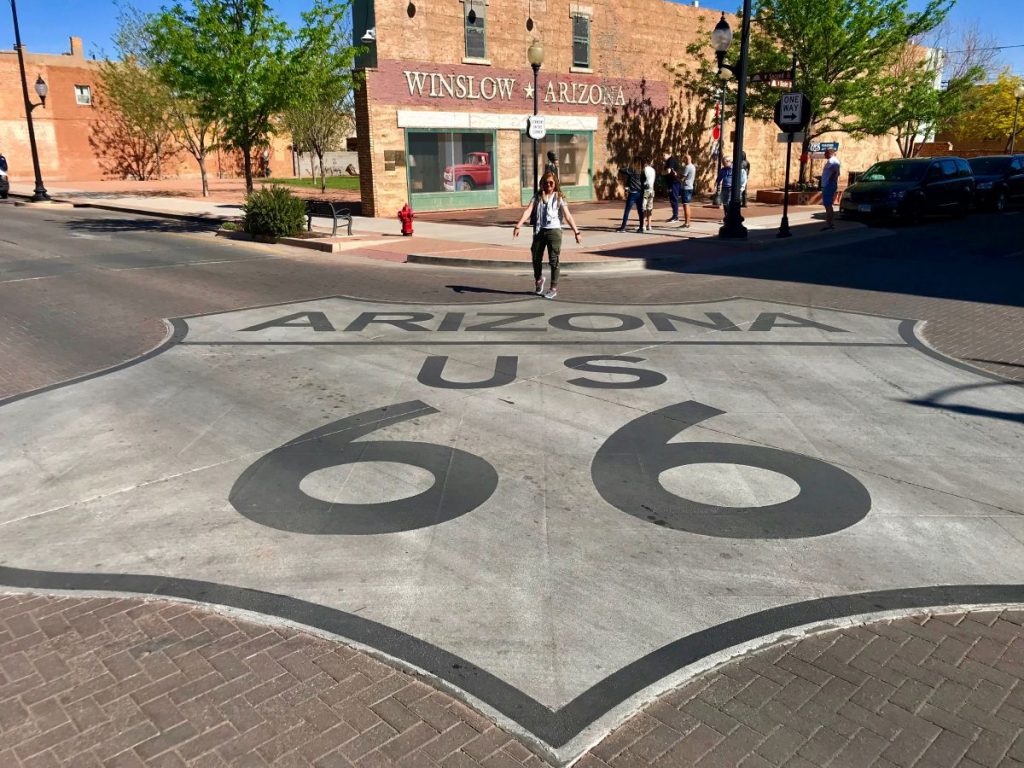 These are the questions I am asked frequently (via email, messenger or instagram direct) during my recent journey through the Mother Road in collaboration with USA Coast to Coast – told day by day on my social networks – and that I kept receiving abundantly once at home.

So, I’ve decided to dedicate my first post to the Main Street of America, one of the most used expressions to mention the U.S. Route 66, giving you a series of notes on the spot about the experience.

Besides a bit of cues to talk about and some useful tips to allow you reckoning whether the U.S. Route 66 is really fit for you and so give you the bases to enjoy it at its best. 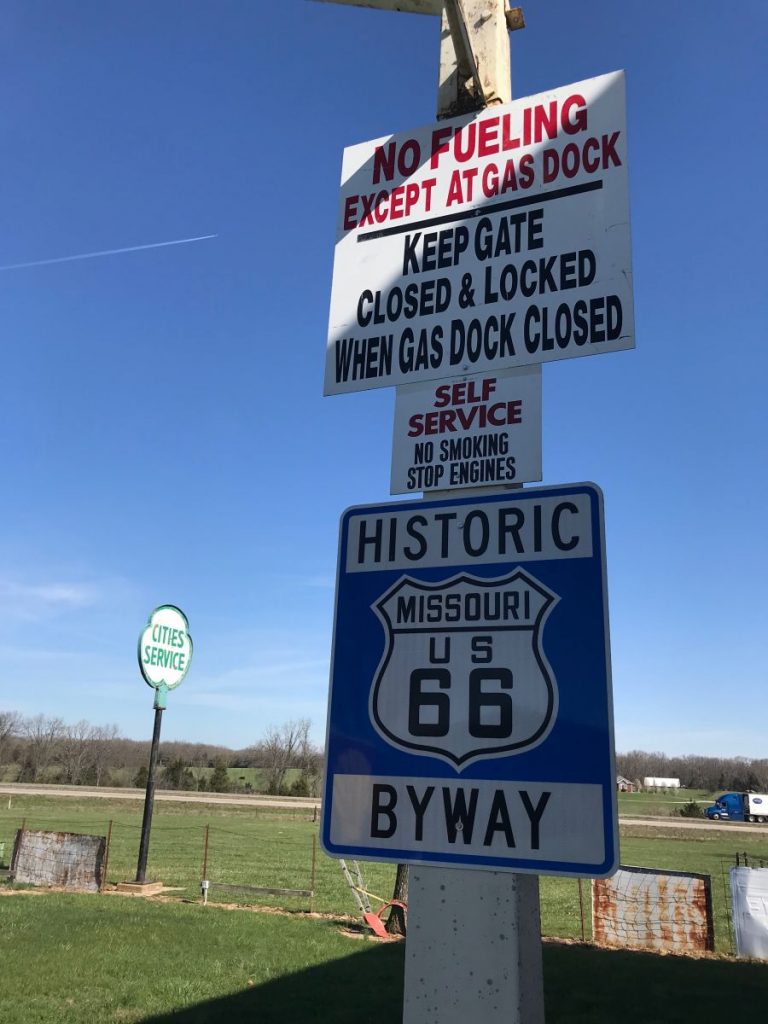 Plan a journey through the U.S. Route 66: Missouri

Plan a journey through the U.S. Route 66: why to choose an on the road through the Mother Road?

And the first tip I want to give you is right to reckon attentively some factors before deciding to set out on a such journey.

Let me explain myself better.

There are endless possibilities of on the roads through the United States, the U.S. Route 66 – at least as regards me – is an experience apart.

It’s a road taking with itself a long story made of icons and stop-motions of the 1950s-1960s, and freedom, that sense of freedom so dear to Jack Kerouac and the Beat Generation, of course.

But also and above all it’s a road taking with itself many different tales tied to “those icons”, not always easy to understand, and a series of difficult and dramatic choices in a period (I mean the Dust Bowl of the 1930s, wonderfully told by John Steinbeck in “Furore”) when this route represented for many people the escape from misery and starvation of the Midwest plains towards the sunny, welcoming and fertile California, land of great hopes and – once reached – often of broken dreams. 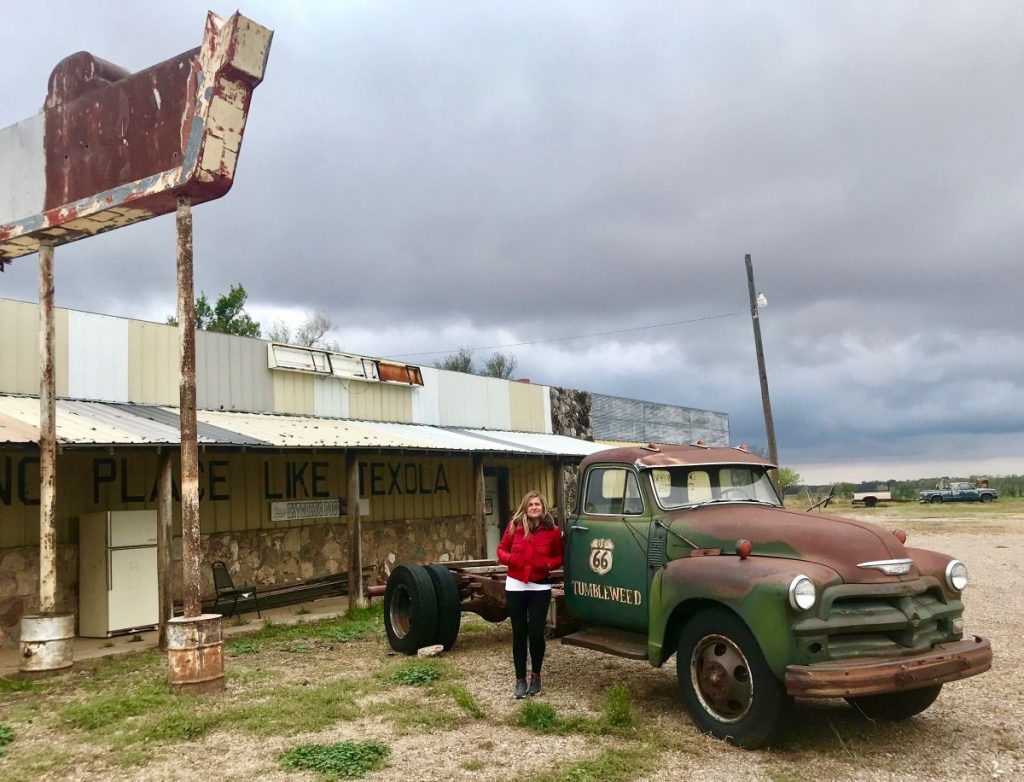 Plan a journey through the U.S. Route 66: Texola ghost town, border between Oklahoma and Texas 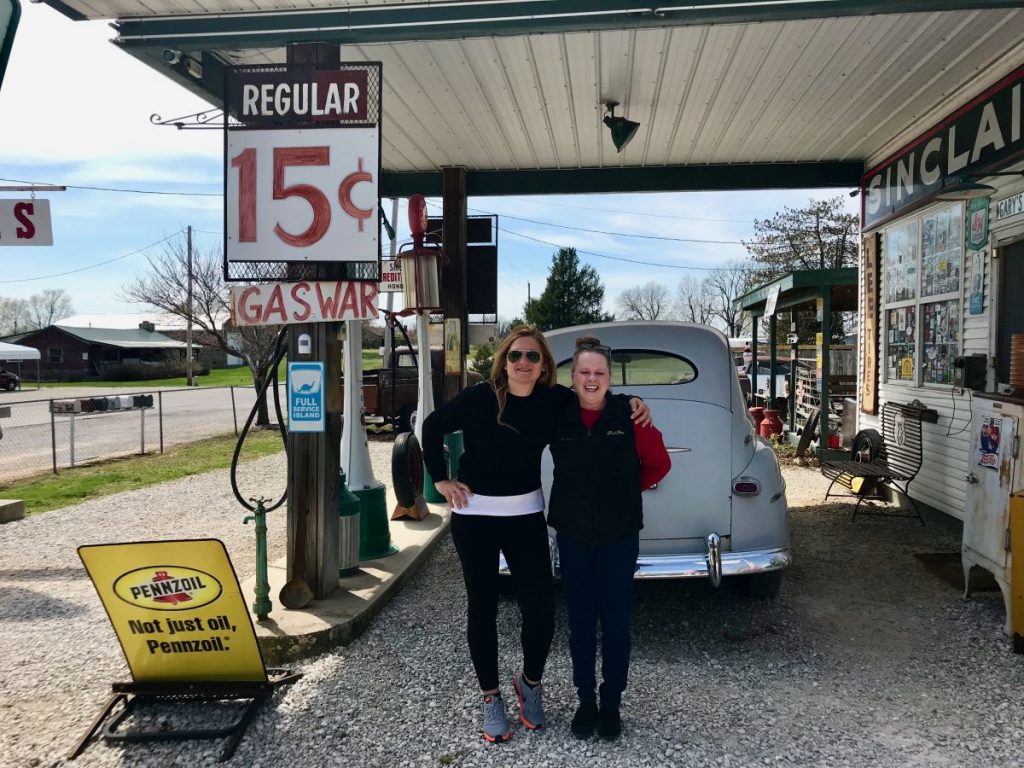 The U.S. route 66 has not to be went along chasing only its most famous pictures, its signs, diners, gas stations, the writings on the asphalt.

It has to be entirely enjoyed, understood and interpreted through its symbols, its stories, its people and the encounters along the route so that every single place visited gets a unique and unrepeatable value for every single traveller. 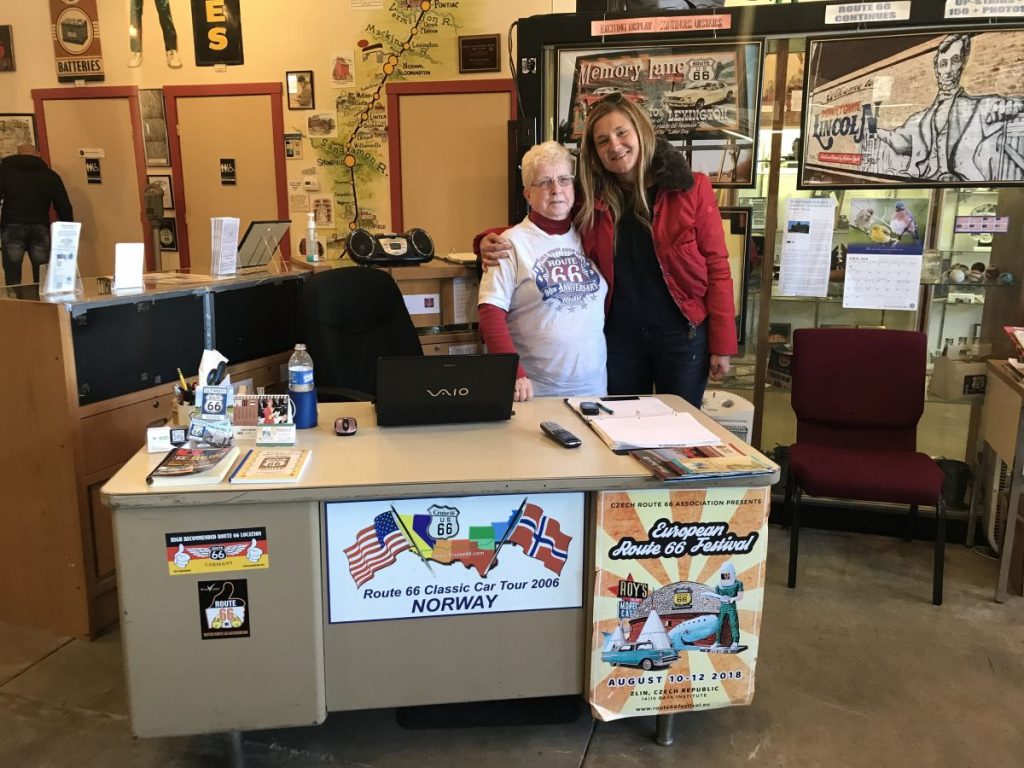 Plan a journey through the U.S. Route 66: Rose, the Pontiac Route 66 Museum and Hall of Fame attendant

Plan a journey through the U.S. Route 66: distance in kilometres, stages and the original path

If you want to enjoy fully this route and its icons, reckon 13/14 full days of only travelling time and don’t overpass the daily distance in kilometres of 300/350km, so you’ll be able to enjoy the road and its stories saving precious time for the surprises the U.S. Route 66 will give you and which cannot be missed. 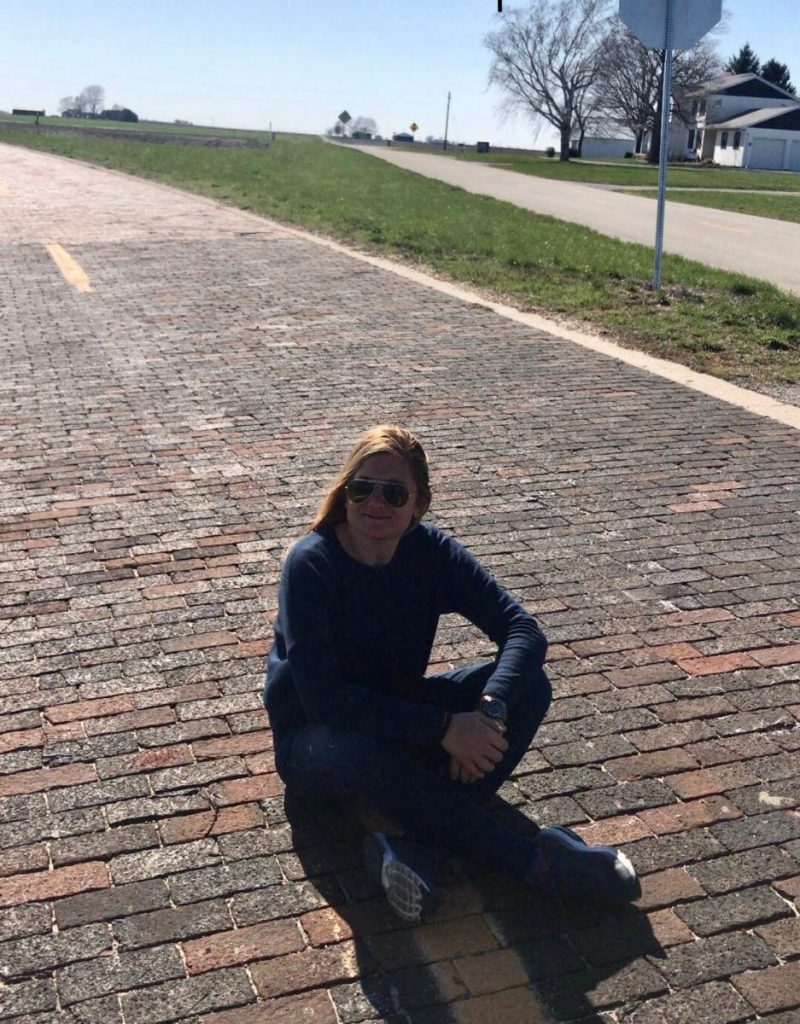 Reckon the stages are really many and if you want to do all of them I’m afraid even three weeks wouldn’t be really enough. And reckon that following the original path of the U.S. Route 66 through every state is not always easy, since in many traits road signs are absent and so we risk – above all using GPS – to find ourselves almost always on the interstates, jumping from one location to another.

It’s extremely important to study the itinerary in advance, get informed and select the stops also according to what one’s own expectations and travel needs are.

Always remember that it exists only one U.S. Route 66, but 1000 different ways to interpret it and enjoy it – among them there’s certainly yours. 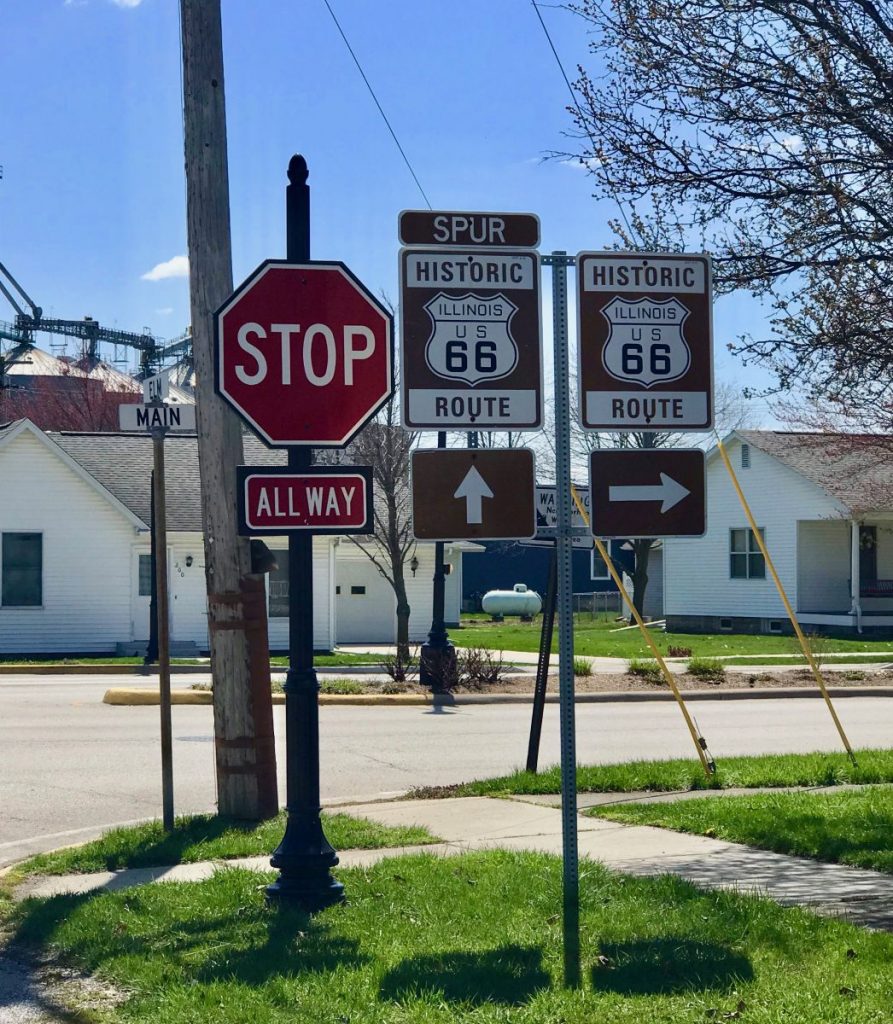 Plan a journey through the U.S. Route 66, following the original path

Only one recommendation: about the U.S. Route 66 forget about the Lonely Planet, it is full of contradictoriness and it’s totally useless, above all only in English version. Better use the EZ66 Guide.

Plan a journey through the U.S. Route 66: motels, diners and gas stations

The motel one is a talk apart which has to be done, to avoid misunderstandings.

Going along and so enjoying fully the U.S. Route 66 it means to have a series of tied experiences that literally make the travel.

Having breakfast or having lunch at the historical diners, stopping and listening to the stories of the owners and collectors of gas stations and attractions along the route, the tales of “who there was” and “who did” the Mother Road, and sleeping in the historical motels – whether not all, at least in the most iconic ones.

Among the many ones the Tucumcari Blue Swallow Motel in new Mexico, the Holbrook Wigwam Motel in Arizona, the Lebanon Monger Moss Motel in Missouri cross my mind.

Motels which are downright icons, milestones of the U.S. Route 66, bearer of stories and emotions, but – mark well – always motels with a certain age and “wear and tear”, so don’t expect high level buildings with 3/4/5 stars services. On the contrary, they are motels full of charm to adapt to in the full spirit of travellers of the Mother Road. 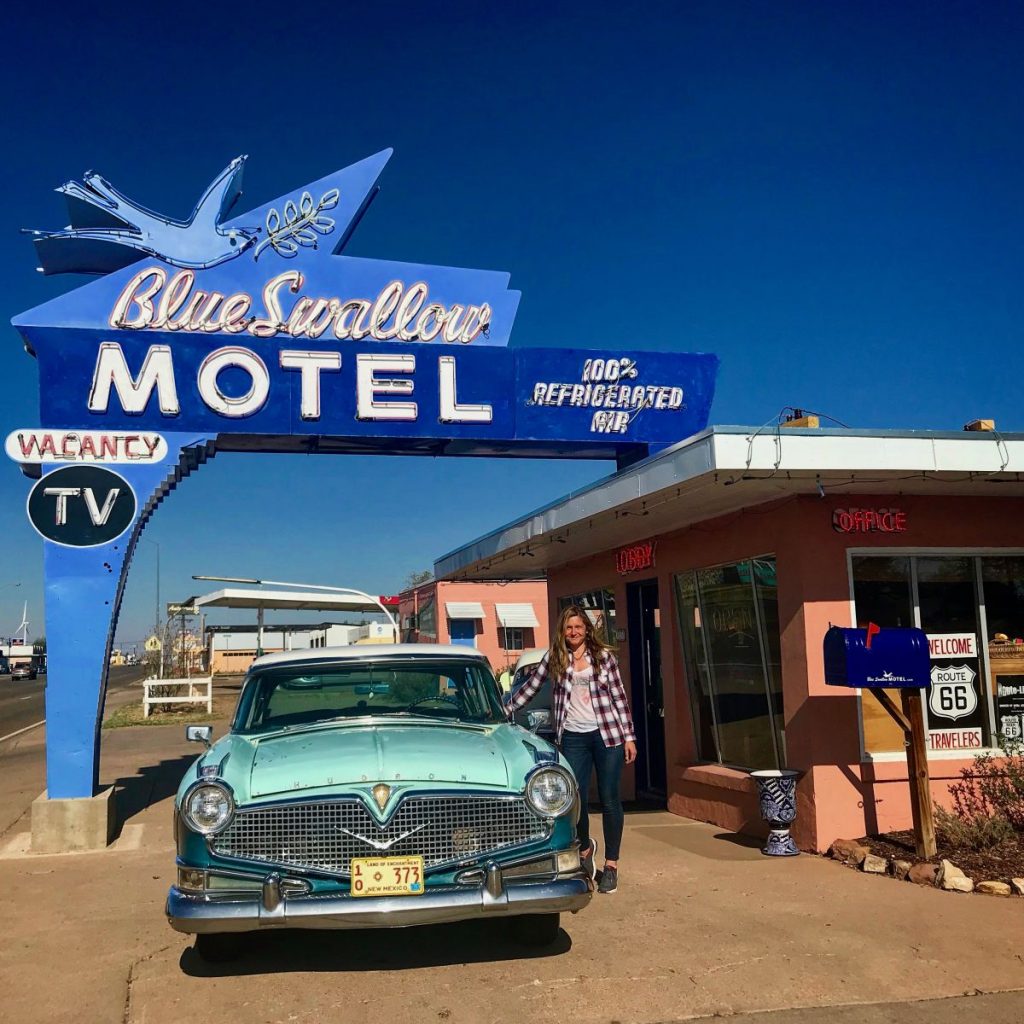 Plan a journey through the U.S. Route 66: “my” Mother Road, my impressions

The U.S. Route 66 surprised me, more than I could imagine.

During my previous on the roads, I had gone through some traits, but only going along its whole I was really able to catch its essence, discovering to prefer some parts that in advance seemed to me less important compared to others.

As a lover of the American history I was sure that the first section of the route would have excited me, and so it was. But as never how the route throughout New Mexico and Arizona, today the most beautiful and suggestive one of the whole Mother Road. 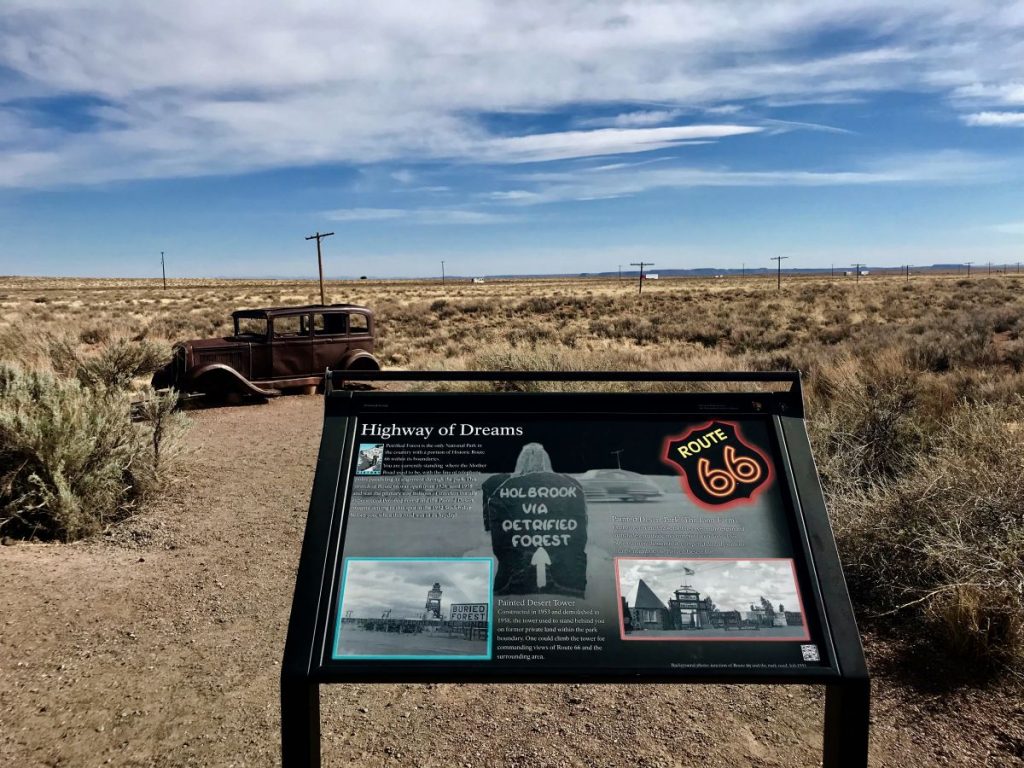 And I don’t talk about the attractions, that perhaps in this area are less present and cared in comparison with the others.

I mean the magic of the route in itself.

The U.S. Route 66 in Arizona follows a very beautiful and rough path at the same time.

It crosses deserts and dry plains, turns among the red rocks of the plateaux, goes up and down from the hills and then gets lost in the vastness of nothing of a long endless road. It follows the landscape, giving who crosses it unique views, often impossible to forget.

And as if this wasn’t enough it gives the discovery of small towns as if they are suspended in a past time, strictly bounded to the “Mother Road” and its stories.

Winslow, Williams, Hackberry, Kingman and most of all Seligman, the place where on February 18th 1987 the Route 66 Historic Association was born.

Angel Delgadillo, owner of the Seligman Barber Shop – who wanted not to leave the towns of the historic route die after the construction of the Interstate 40 – committed himself to turn the old – and abandoned by now – U.S. Route 66 into an historic route to cross in order to re-live the great myth of the run to the West, creating a new and unexpected interest in the Mother Road.

Today, if we are able to go along this route, discover its stories and re-live its deeds, this is possible above all thanks to Angel, his love for the U.S. Route 66 and his tenancy, and I – together with all the travellers who went along it also more times – cannot help thanking him for this wonderful gift.

My journey towards California keeps going on. It’s useless to hide that the Main Street of America, its places, its people, the colors and its tales “caught” me even more than I could imagine.