What to see in Abu Dhabi: visit the new Louvre Museum. An exciting journey back in time among cultures, religions and civilizations 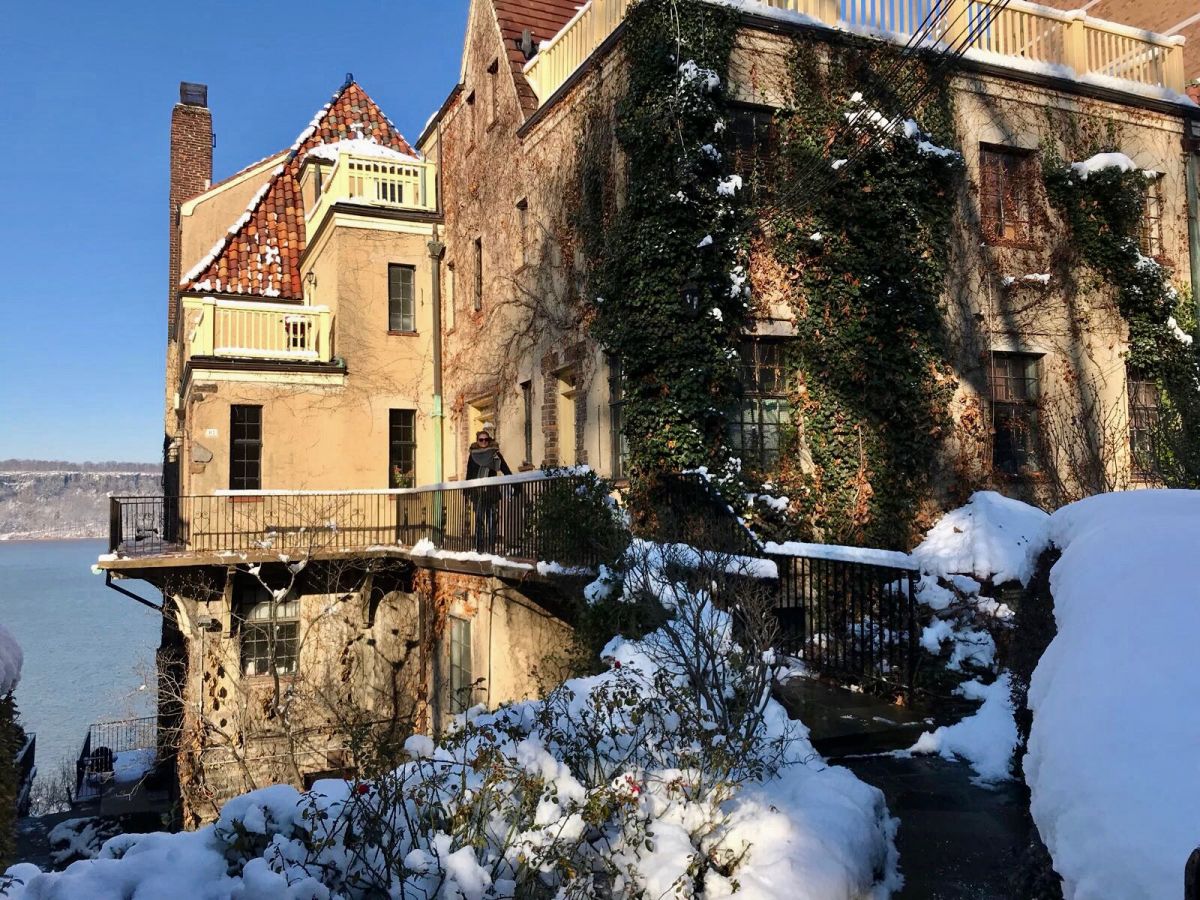 Bedsides the patinated, certainly more photographed and told New York, it exists another one hidden and very beautiful which hides paths and locations often surprising and unexpected.

A hidden New York – or maybe should say secret – which tells about fairytale views, and suggestive vintage dwellings, views and rock spurs overlooking the Hudson River, paths, woods and legends, but also about men and women, poem an passions.

I confess that my most beautiful itineraries are born right following these cues, sometimes upon a news read by chance on The New Yorker, a tip of an old New Yorker friend of mine or a notification of the New York Historical Society.

Like Spuyten Duyvil, a small heaven corner in the south-west of Bronx, spectacularly set on a rocky cliff of the Hudson River. 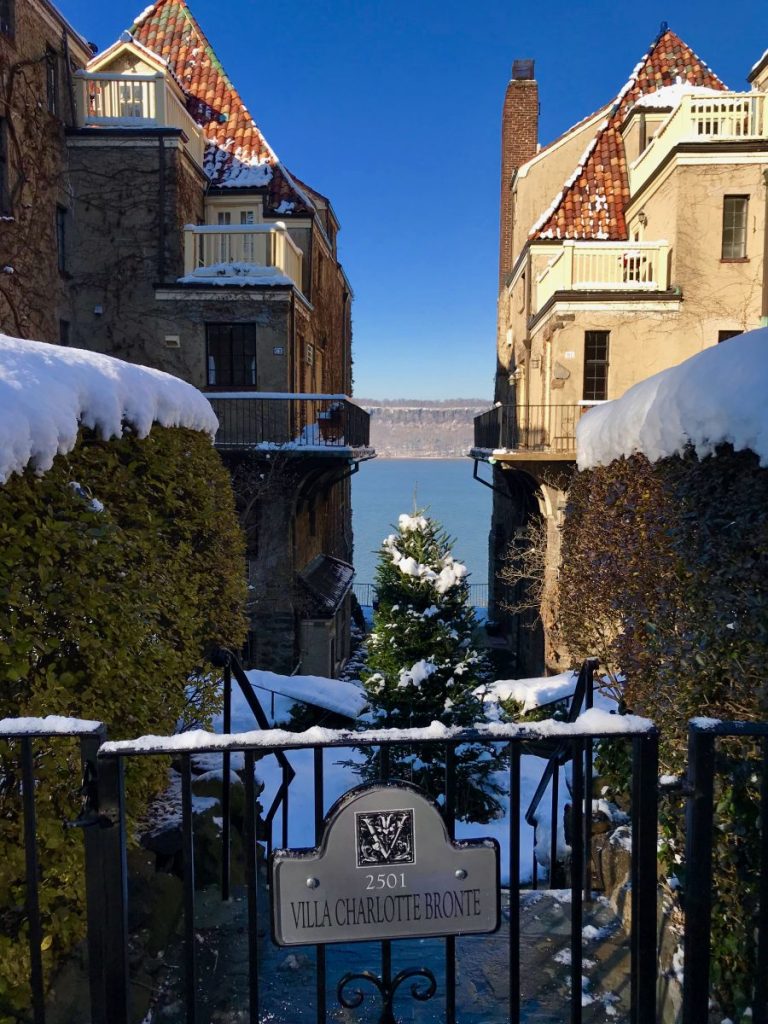 Spuyten Duyvil is an exclusive residential neighborhood of Bronx, bordering with the as elegant Riverdale to the north, the multiethnic Kingsbridge to the east, the Harlem River to the south and the Hudson River to the west.

It seems the name comes from the Dutch expression “Spuitende Duivel” which means “the devil turning”. 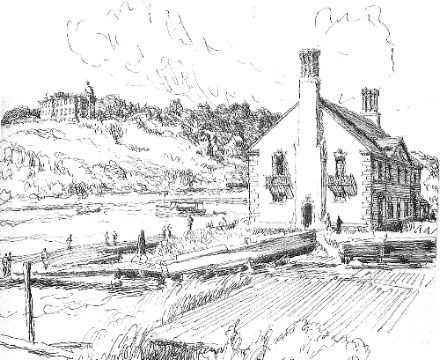 Hidden New York: Spuyten Duyvil, a drawing about how the area should be in the 1700s

One among the most credited legends tied to this place tells that the first Dutch families of colons arrived to the north of Manhattan were decimated by the infernal vortex creating between Harlem and the Hudson River. As if boats were swallowed up by the nothing so that people thought the devil itself stayed in those depths to catch more souls possible.

Some news of that period increased this belief: it is said that in 1642 a certain Anthony Van Corlaer died while was trying to cross the Hudson from Spuyten Duyvil and a witness affirmed the devil itself – revealed itself disguised as a giant fish – swam quickly as far as “catching the leg of the strong Anthony sweeping him away under the waves.” 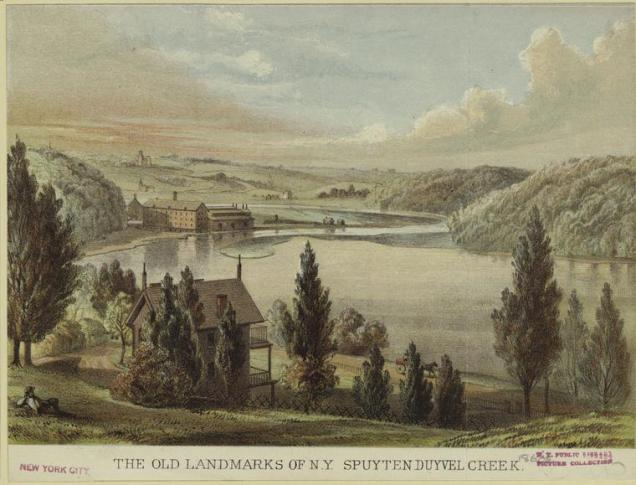 Whether these deaths were caused actually by dangerous vortexes originated by the union of the two rivers or by the presence of sharks risen up from the Ocean through the Hudson River is a matter of fact. Anyway, over time among the inhabitants and visitors remained the perception of Spuyten Duyvil as a very beautiful and struggling place at the same time, subjected to the spell of some witches or the devil itself and for this reason suspended for the eternity in its own dimension.

When at the end if the 17100s the first wooden bridge on the Harlem River was built, the entire area populated with Dutch farms, then in the 1900s with the arrival of the railroad line from Grand Central Terminal – wanted by Cornelius Vanderbilt – well-off families coming from Manhattan started to arrive to the neighborhood, attracted by the extraordinary beauty of the place and by the nearness of the area to aimed and luxury neighborhoods as Riverdale and Fieldston.

Today Spuyten Duyvil still keeps the charm of its legends, its views and its stories.

A suggestive rocky spur where several wonderful vintage dwellings overlooking the Hudson River, some among the most beautiful public parks of the city and a series of paths find their own ideal place. 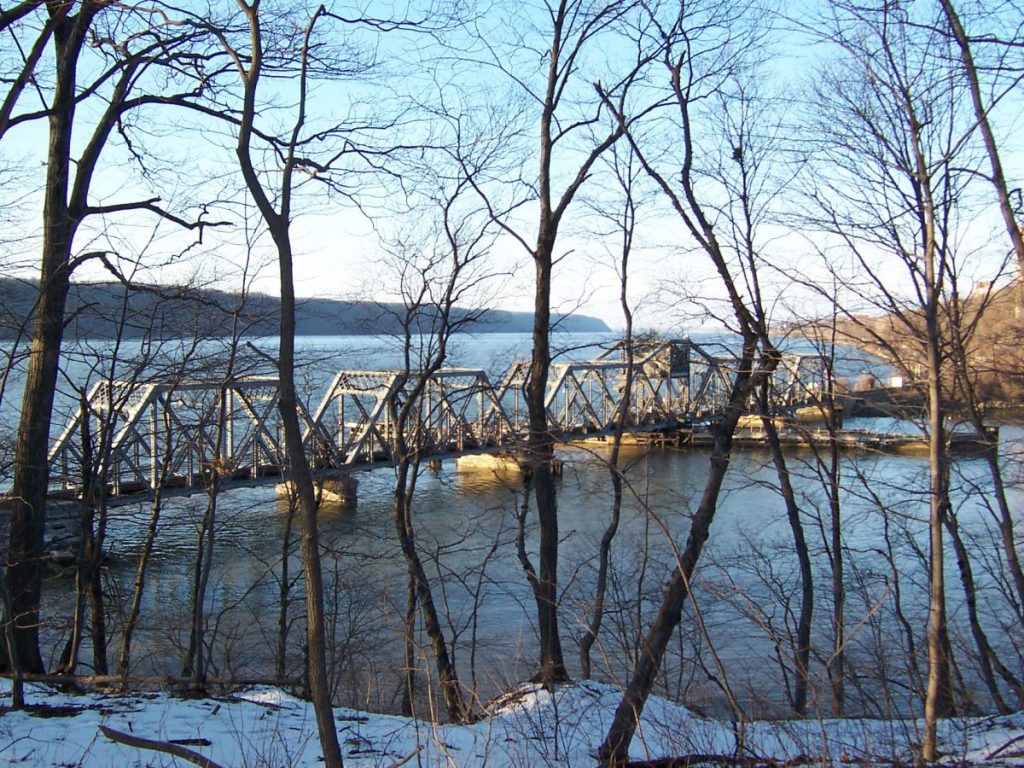 Hidden New York: the crossing between Harlem and the Hudson River 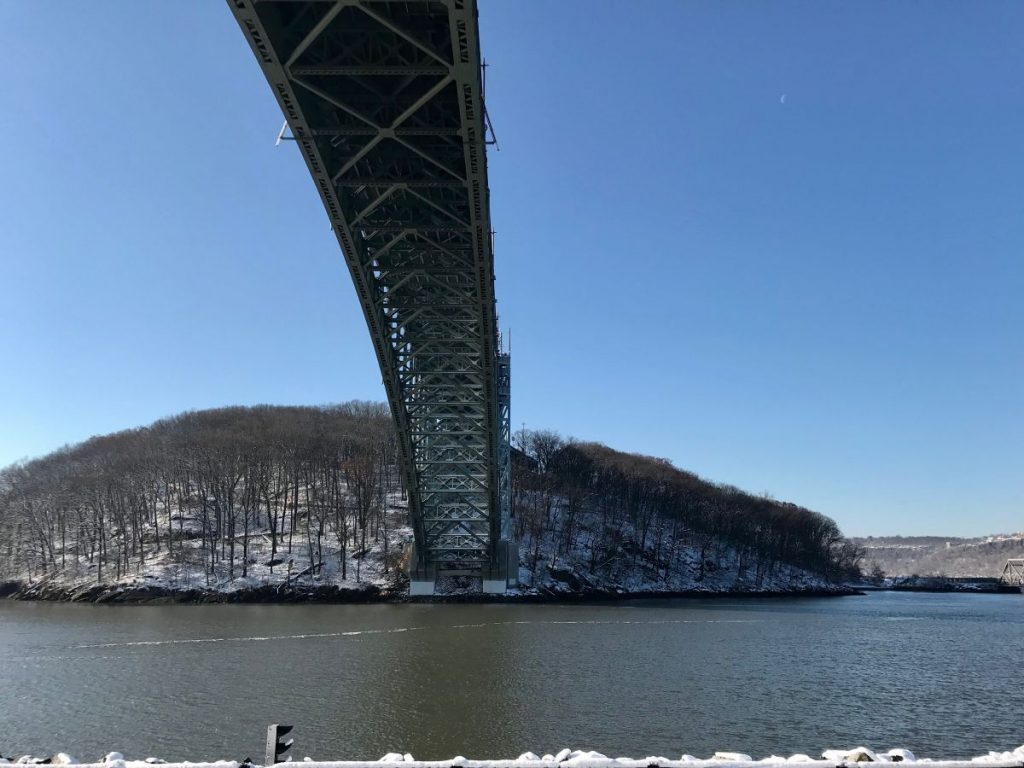 Spuyten Duyvil can be reached by the Hudson line of the North Railroad-Subway directly from Grand Central terminal.

The final part of the route by train follows the flow of the Harlem River as far as Bronx and then keeps going on along a suggestive path – passing right on The Big C Rock, the big C drawn in the lively rock in honor to the Columbia University – near the river as far as the Spuyten Duyvil stop. 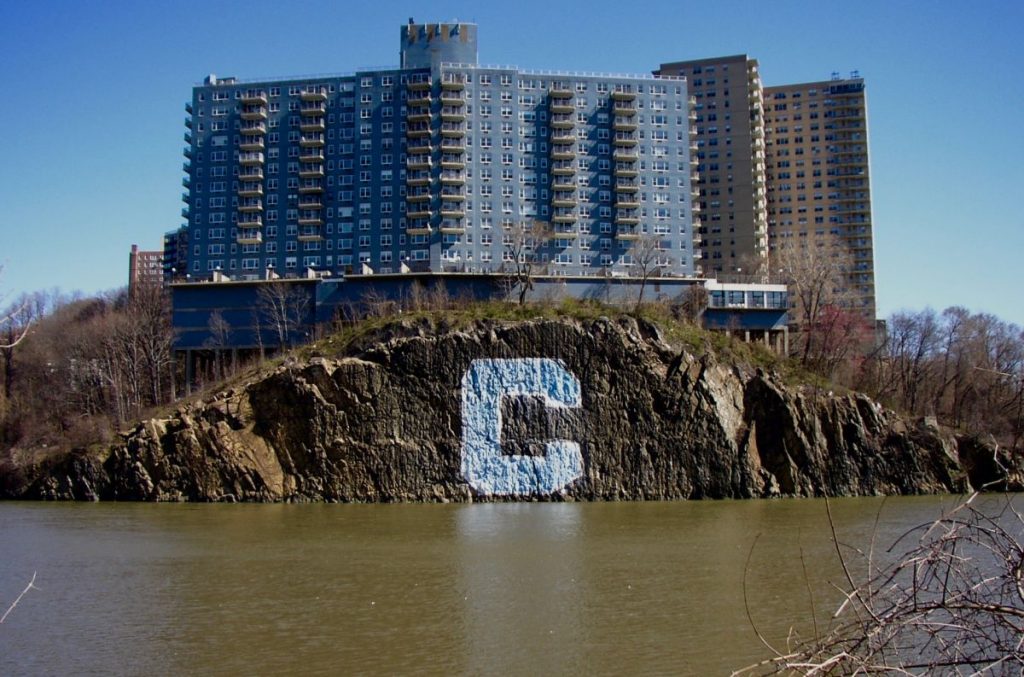 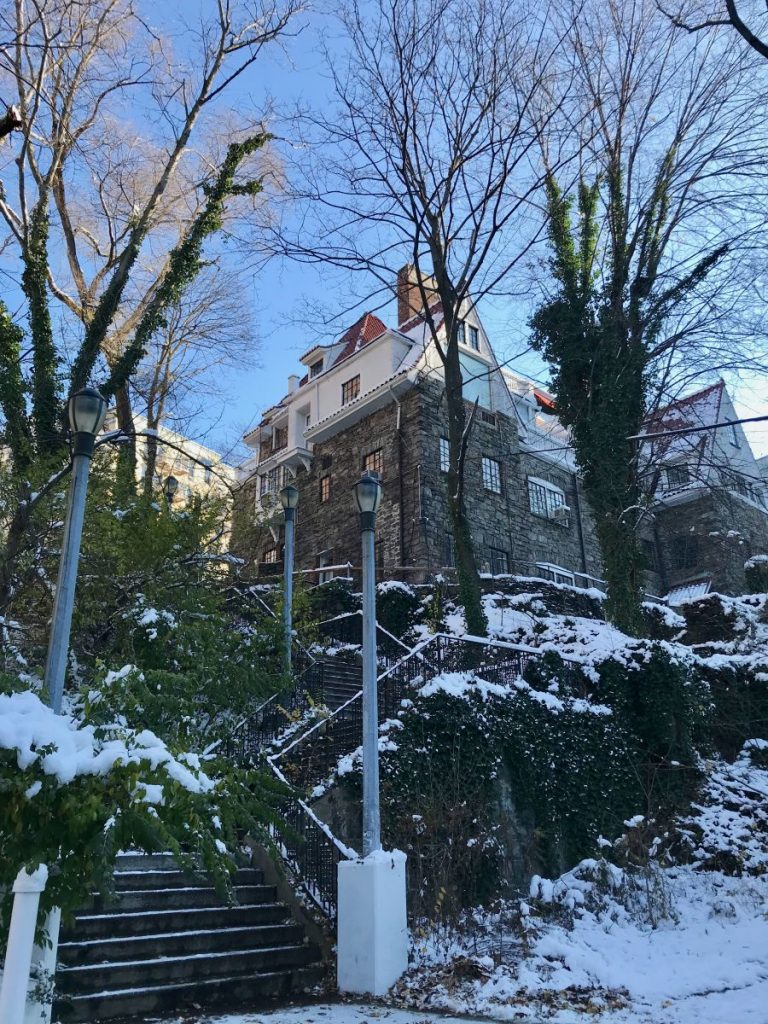 Going up on foot along the slope from the station, through Edsall Ave first and Palisade Ave then, progressively you go into the landscape beauty of the place.

You sight the Harlem River’s entry into the Hudson and the particular Spuyten Duyvil Bridge, an extractable segments railroad bridge used both for the transit of the Amtrak line to Albany, NY and Canada, and for the passage of boats. 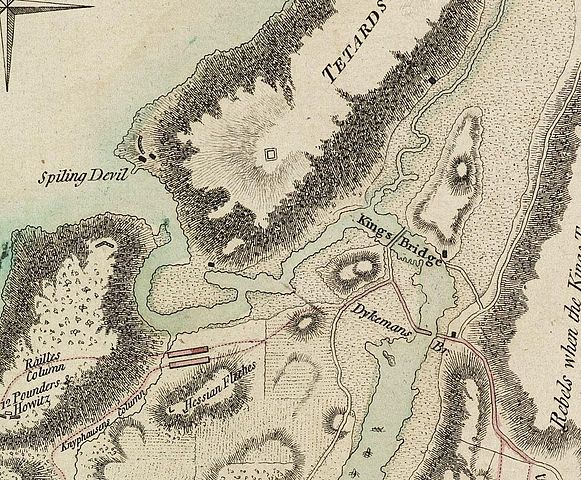 At the end of the 1900s Spuyten Duyvil was an isolated place set on a rocky cliff on the Hudson River.

John J. McKelvey, lawyer, writer and entrepreneur fell madly in love with it and in 1926 built right on that hill a castle peeped out as if by magic from the English countryside, and divided it into luxury apartments.

He called it “The Villa Charlotte Bronte” advertising it in a paragraph on the New York Times as a dream dwelling for anyone who has “a soul craving for the majesty of the river.”

Today the whole building – always divided into apartments, many of them inhabited – takes pride of place at 2501, Palisade Ave. Without disturbing too much, you can go through the entrance gate at the garden and go as far as the first view points on the Hudson River: you’ll realize why photographers from all over the world arrive as far as here to photograph this promontory and its dwellings. 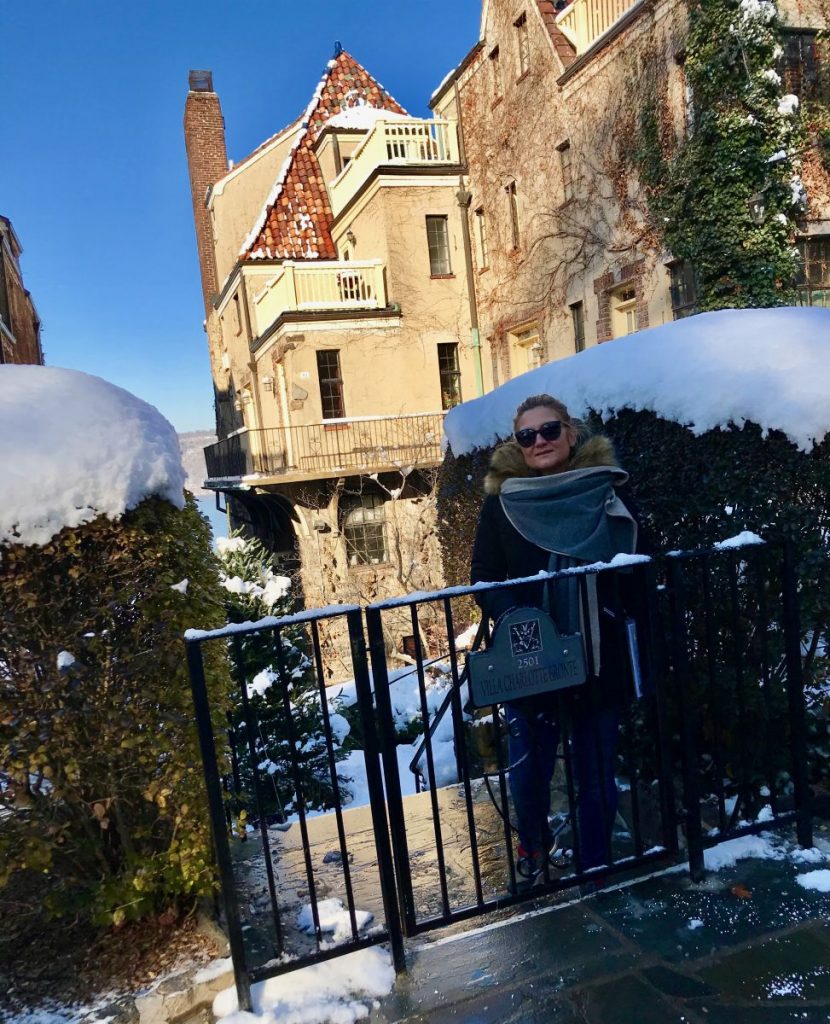 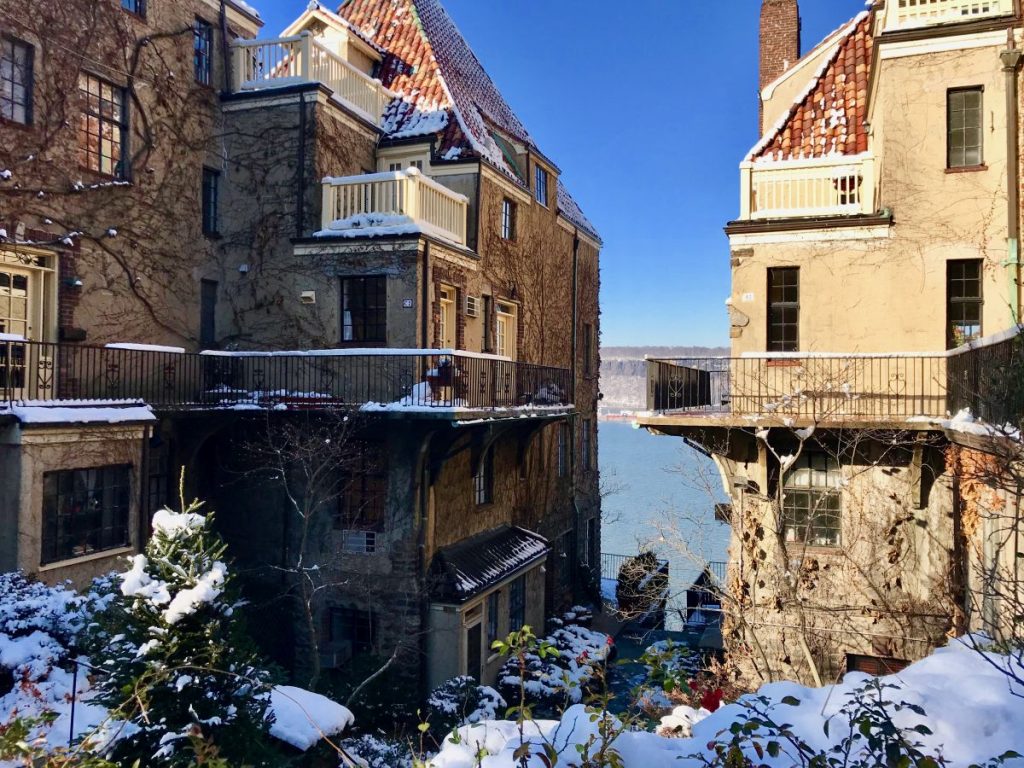 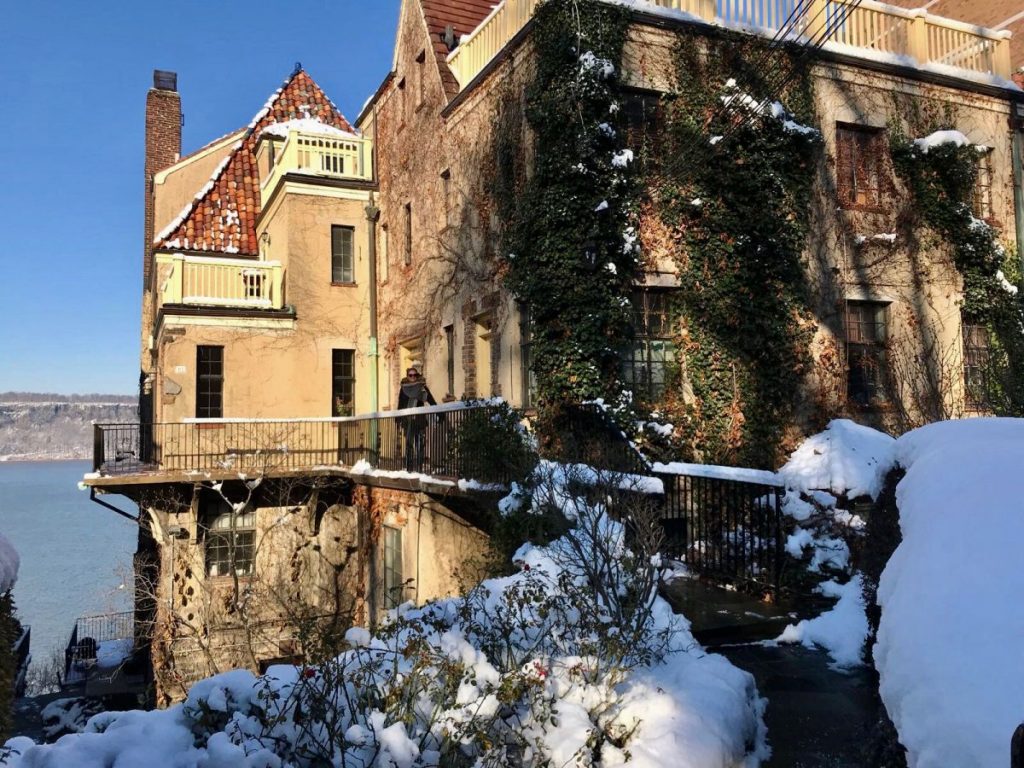 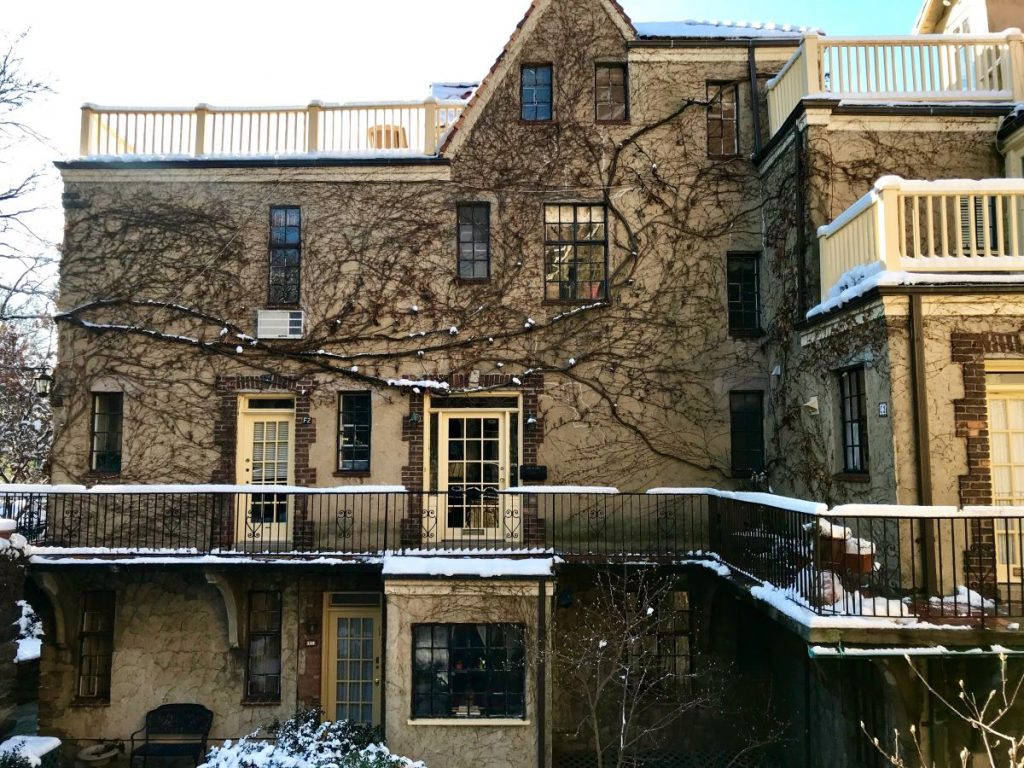 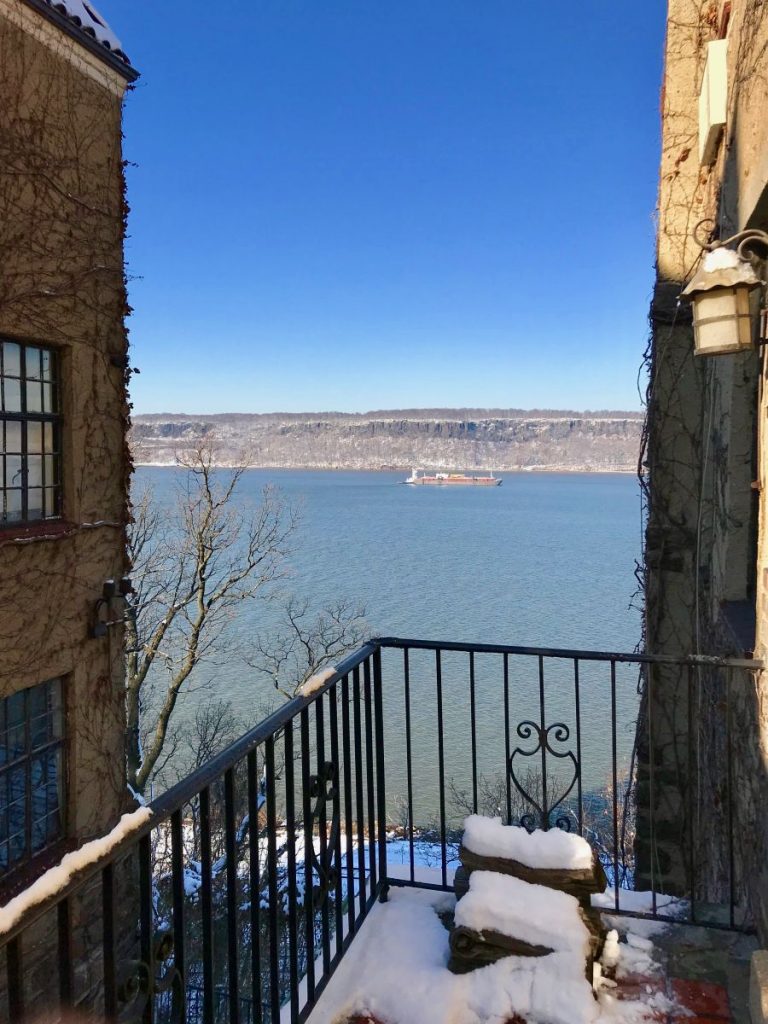 Keep walking along Palisade Ave to enjoy the view of the Hudson alternating with vintage dwellings and more modern buildings as far as detouring towards the Henry Hudson Memorial Park and reach the old Edgehill Church of Spuyten Duyvil.

The Church was built in 1888-89 as a chapel of the Presbyterian Church of the near Riverdale, based on a project by Francis H. Kimball in an eclectic mix of styles – Romanesque Revival, Tudor Revival and Shingle style – and Tiffany windows. 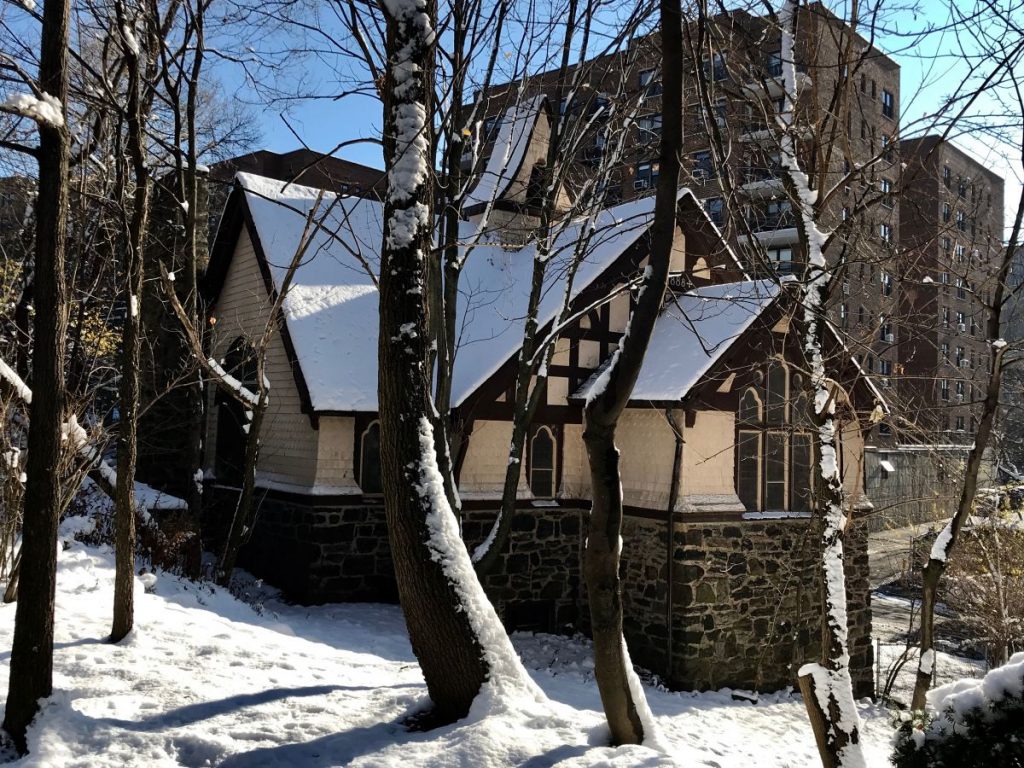 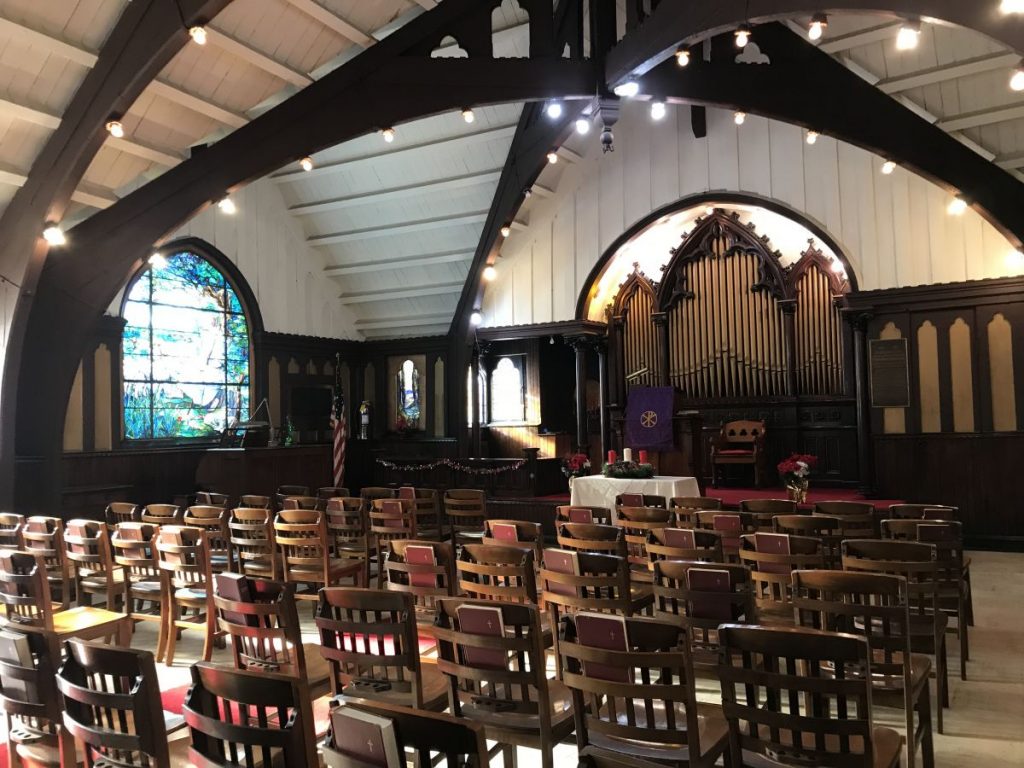 Hidden New York: Edgehill Church of Spuyten Duyvil, the inside

Keep walking thought Kappok Street you’ll reach one among the most charming streets of the neighborhood, Netherland Ave. Here the most original and beautiful dwellings gather: it looks like – as for The Charlotte Bronte Villa and the Edgehill Church – to find oneself catapulted as if by magic into a nineteenth century English countryside village.

You can decide to go as far as the West 235 Street and enjoy the relaxed atmosphere of the neighborhood, having a coffee or having a look around the stores and markets of the area. Or cut through Ewen Park to reach the Kingsbridge subway stop – 231, West Broadway, line 1 – to come back directly to Manhattan. 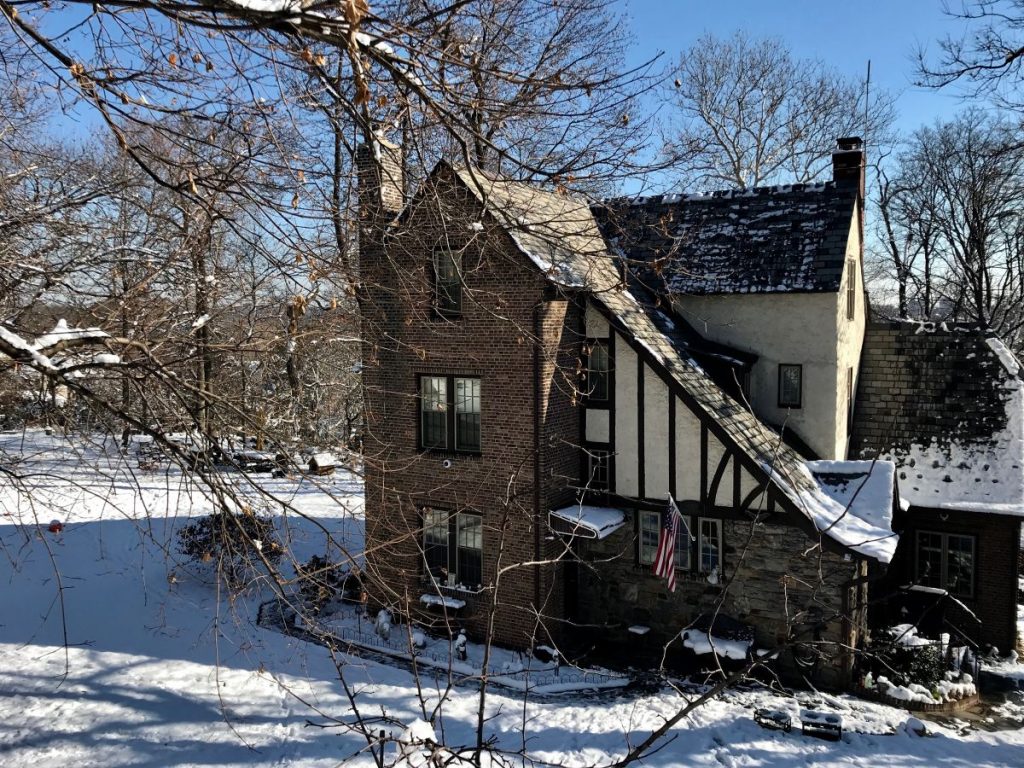 The itinerary described can be easily done on foot, there are no uneven paths or bumpy roads.

It’s a nice 3,5km walk to do in a half day or more if you want to extend the tour to Riverdale. 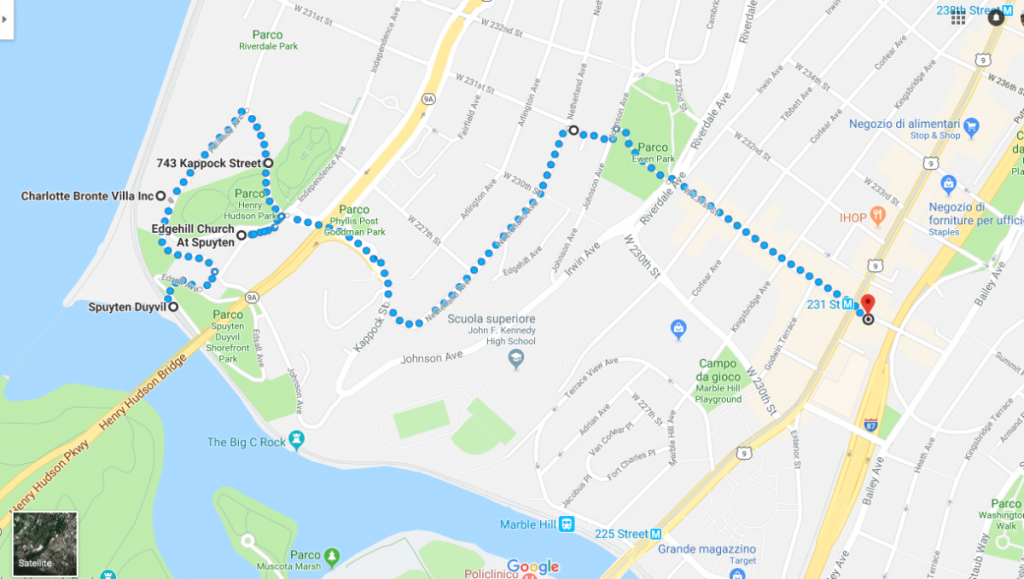 The ticket price of the Hudson line to Spuyten Duyvil is 7$ per route, while for the return by line 1 it will be enough to use the metro card or buy a one way ticket of the New Yorker Subway (3$).