Got Your eTA? 7 things to know before visiting Canada

Graffiti and Street Art in New York: 5 murals, tours and theme paths not to miss 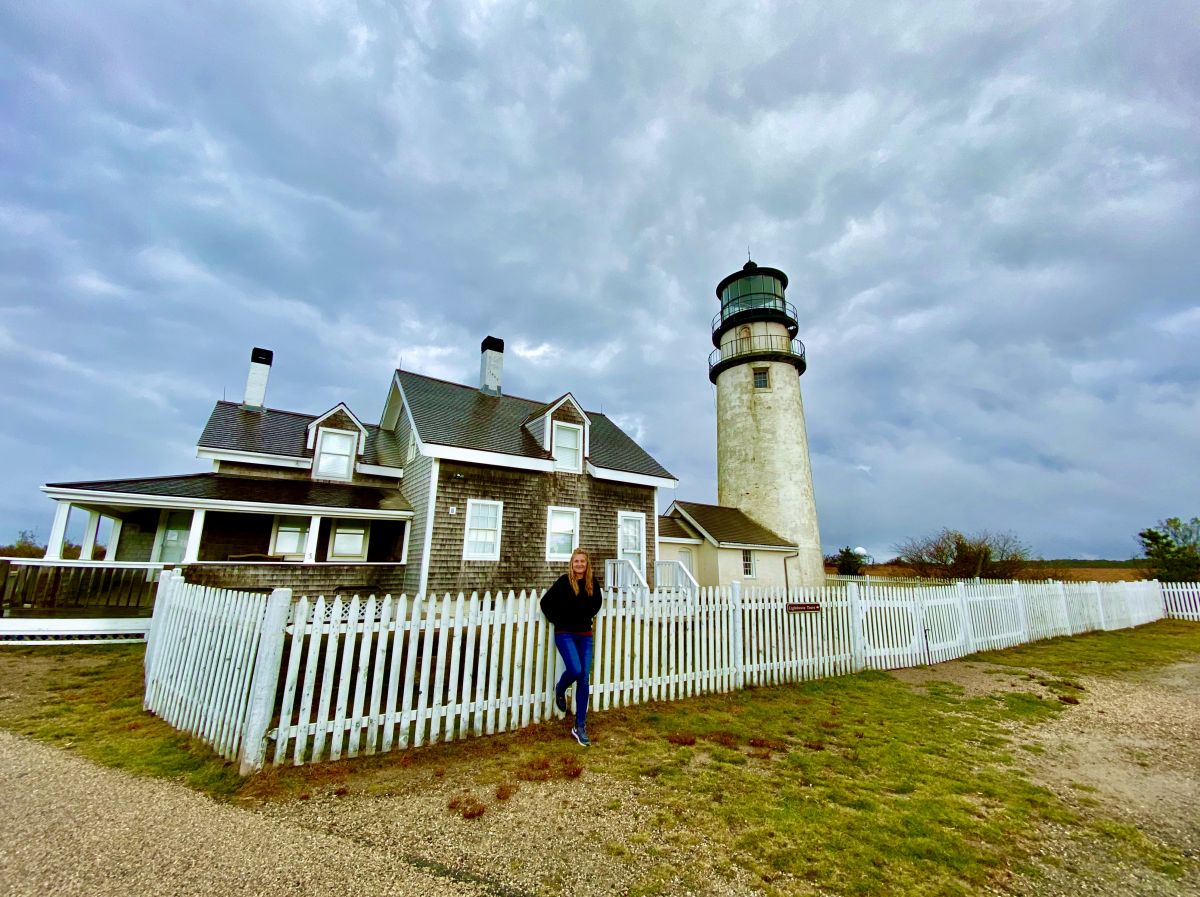 Edward Hopper places in the USA: a short and intense itinerary from New York – and from the Hudson Valley – as far as New England. A journey discovering the sites tied to the life, formation, inspiration and the works of the greatest painter of the American Realism. 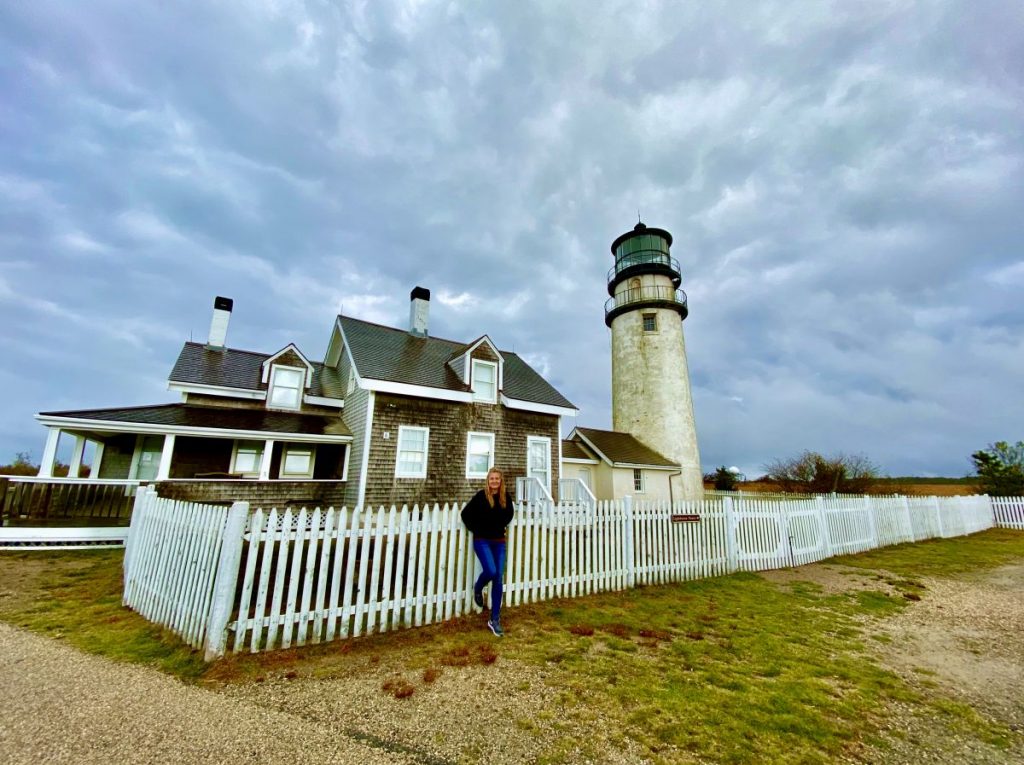 Edward Hopper places in the USA: among journeys, inspirations and itineraries

Travelling to the USA following the footsteps, inspirations and the places of the greatest storytellers. Have you ever thought about it?!

I think about those artists that told us and made America recognizable thanks to the icons originated by their works, their illustrations, their paintings. I think about Norman Rockwell – I have already told about him here widely – but also and above all about Edward Hopper, considered rightly one of the fathers of the real and authentic American Realism.

His lighthouses, the insides full of lights of his houses, the crossroads, the railroads, the dwellings on the beach, the gas pumps, the diners, the roads he painted over time today act as open books, cult images that we instinctively lead back to some symbol places of the United States of America. 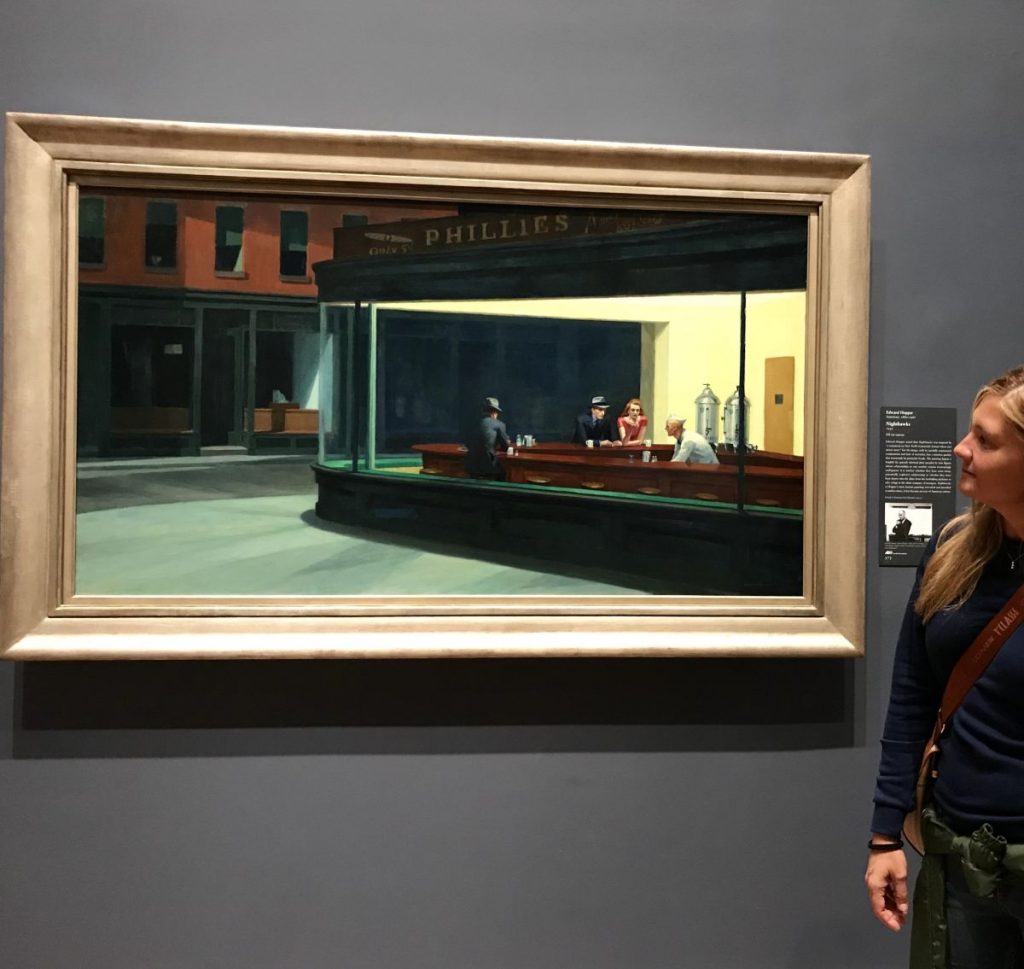 It is impossible to drive the America East Coast, from New York as far as New England above all, and not recognize in the stages along the path his brushstrokes and all the magic of his works, his merging in every environment the light with the absence of light to create shadow and deepness in odd and amazing ways. Everything always in a surrounding calm speaking volumes.

The perfect background for a narration all “American”.

From here was born the idea of this short itinerary, from his private – where everything started – as far as his artistic evolution.

An emotional journey into the life, the inspiration and the locations of Edward Hopper into the USA.

“If you could say it in words, there would be no reason to paint.” 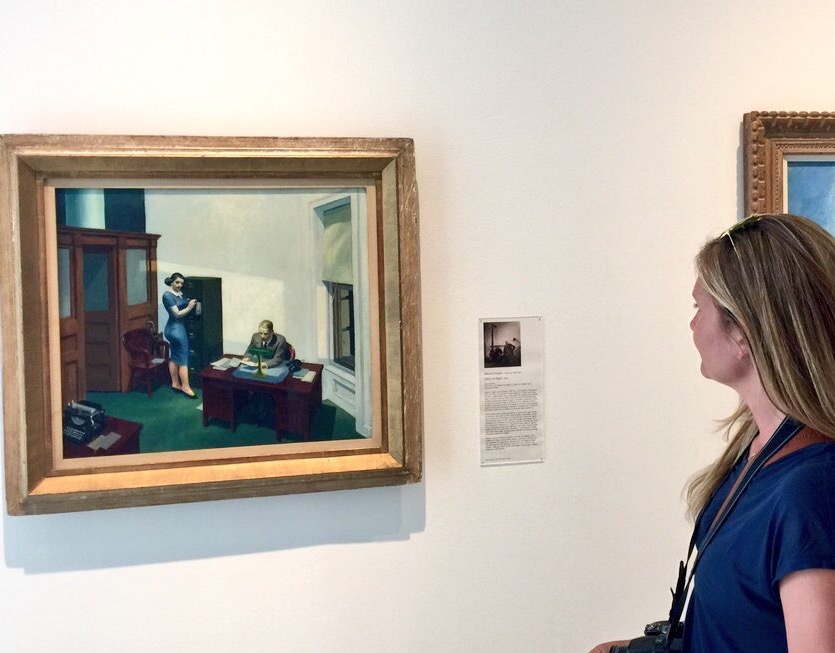 Our journey through the places of Edward Hopper in the USA leaves from a peculiar small town in the Hudson Valley, Nyack.

It can be reached easily in less than an hour from New York. You can use the car – then discovering the amazing Hudson Valley; find here a detailed itinerary of a couple of days – or move by train using the Hudson Line – Metro North from Grand Central Terminal or by bus from Port Authority Bus Terminal between 8th Ave and 42nd Street.

Nyack is a small fishermen and craftsmen village, scenically nestled on the Hudson River coasts, where Edward Hopper was born on July 22nd, 1882 – he came from one of the most ancient Dutch families settled here starting from the end of the 1600s – and where today he rests. 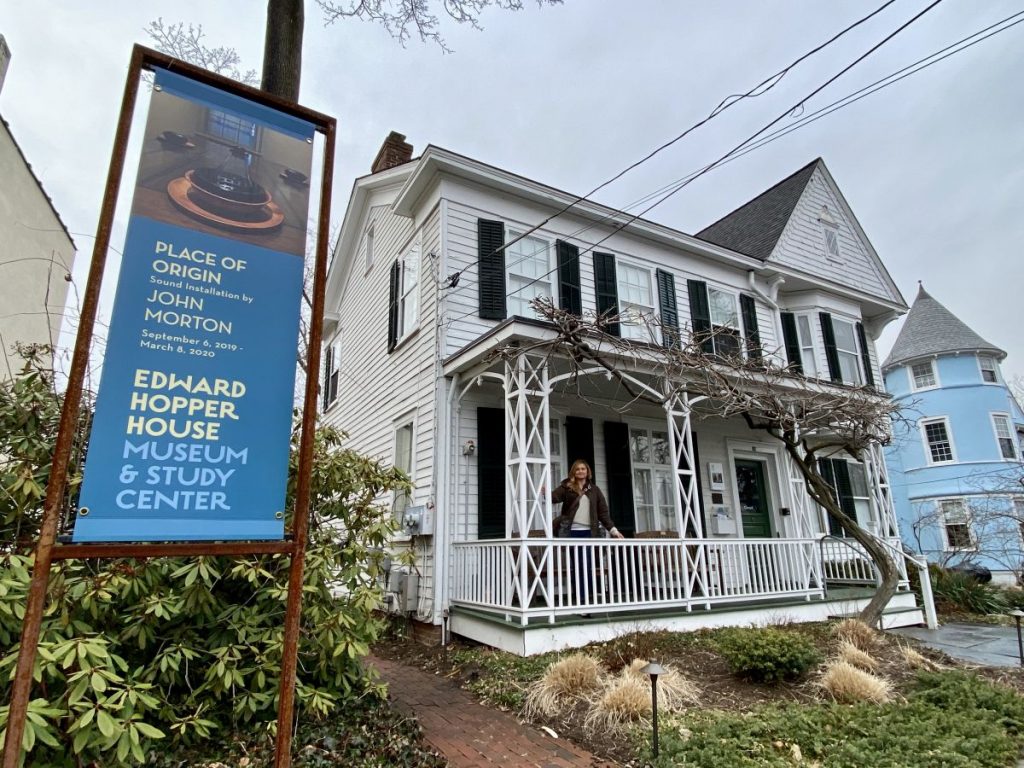 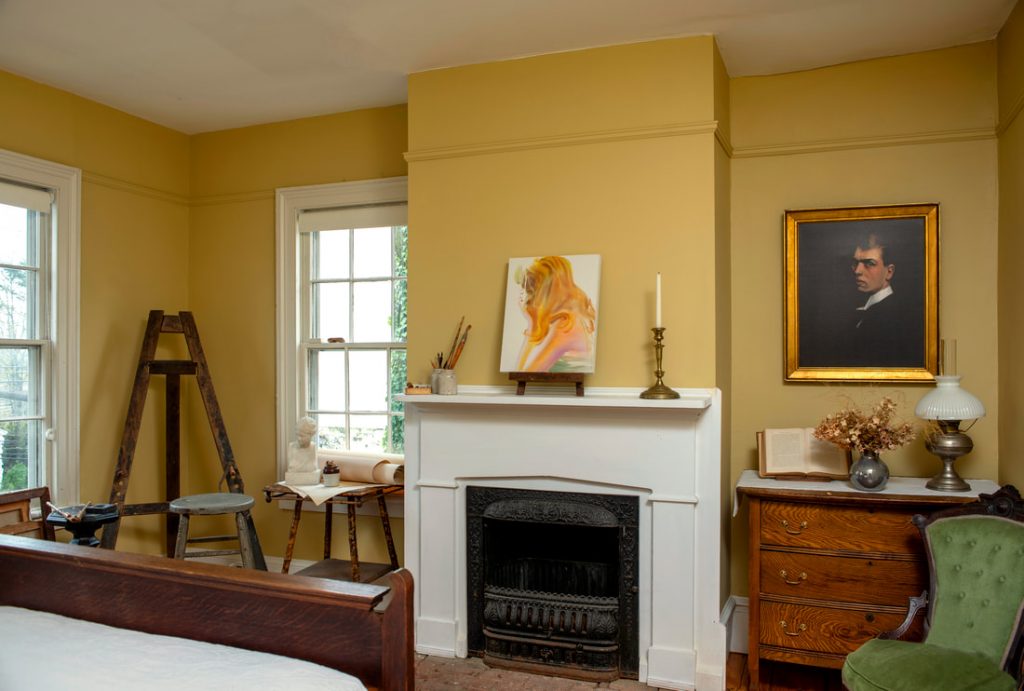 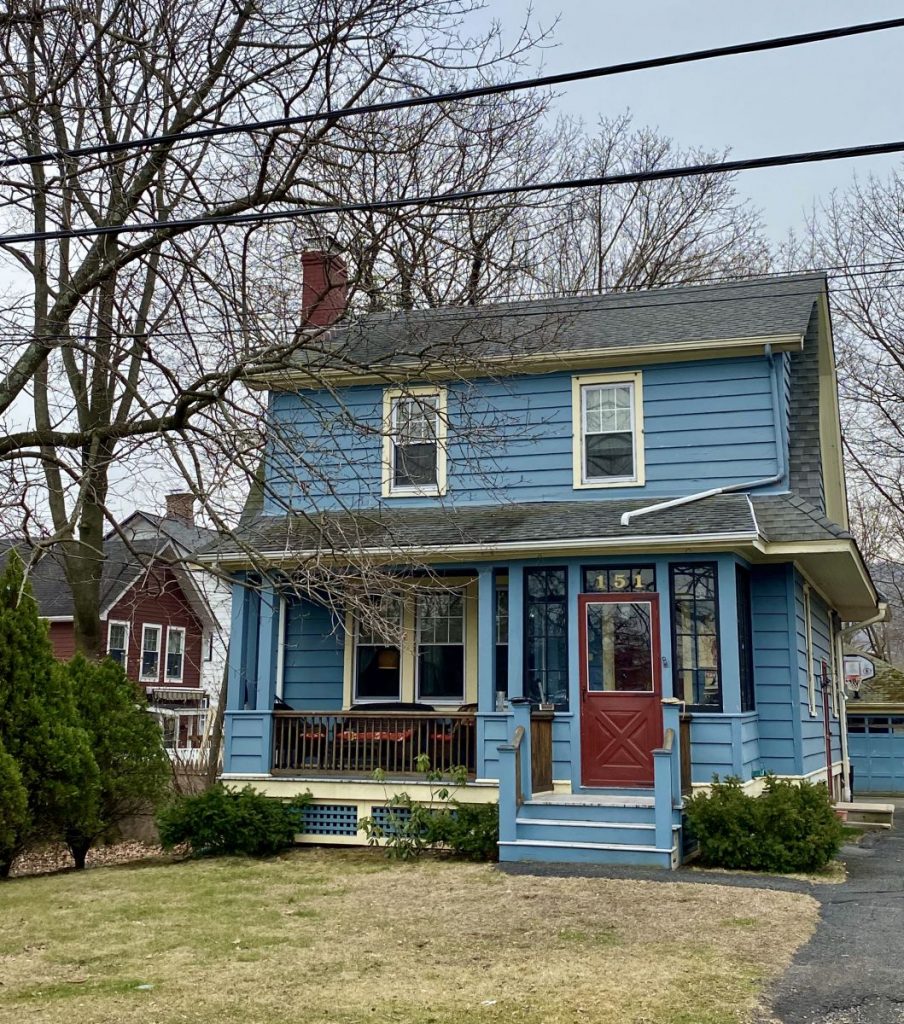 His birth home, located at 82, N Broadway – the place where he spent a good part of his childhood and teenage hood, and where he discovered the passion for painting, stimulated and supported by his mother – today is a museum and a study center dedicated to him: The Edward Hopper House Museum & Study Center, which organizes also guided walking tours discovering Hopper’s places in Nyack.

His grave is located at the Oak Hill Cemetery, on the top of a hill from where people can admire an amazing view of the town and the river.

To reach the right place it will be enough to ask the keeper – adjoining the hall – for the map with the indications.

It is a simple tombstone where also his wife Josephine is buried, one single heavy granite stone with their names engraved on it.

Particularly outstanding is the brush placed on the top: it is an homage of some fans of the artist. 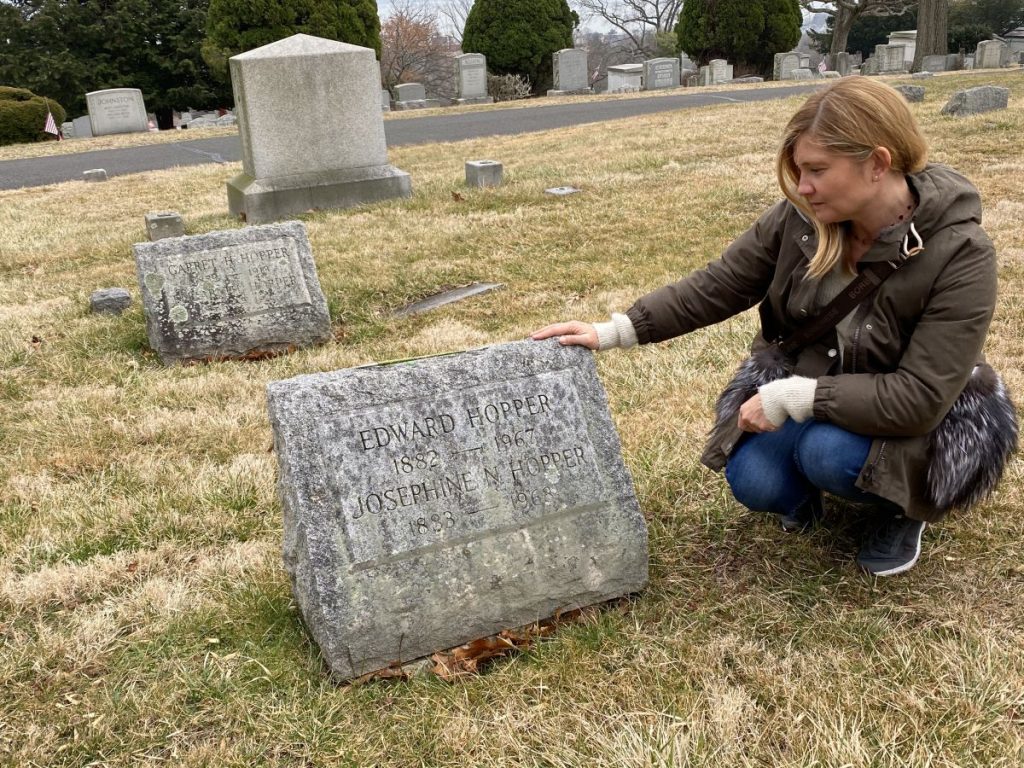 Edward Hopper places in the USA: why arriving as far as New York?

To see with your own eyes – whether you are fans of his works or simply onlookers – the place where everything was born.

Walking along the streets of downtown you’ll see countless historic dwellings, crossroads, windows stores and venues which will recall Hopper’s paintings. And you’ll get where his passion for portraiture of the American province was born.

In Nyack everything – literally – tells about him, his paintings, his illustrations.

Click here to find a report dedicated to this area of the Hudson Valley. A journey by day from New York to visit the Sleepy Hollow by Washington Irving and Tim Burton – do you remember the novel and the movie “The Legend of Sleepy Hollow?” – and the Nyack by Edward Hopper. 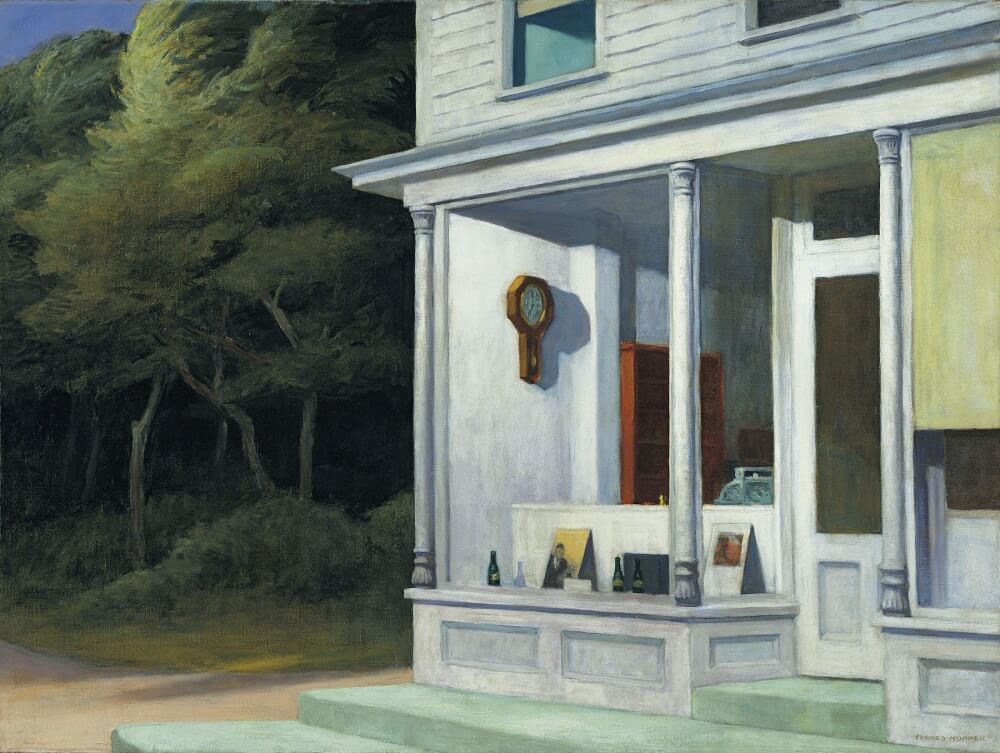 One day excursions from New York: one of the stores in Nyack painted by Hopper

After graduation, supported and stimulated as always by his beloved parents – his mother particularly got immediately his great artistic skills – Edward Hopper moved to New York to follow the courses at the New York School of Art.

And then New York remained one of his reference points, both as man and an artist, all along his life – despite the travels to Europe and the Summers spent in Cape Cod.

Today his work can be admired in the greatest museums of the city: The Metropolitan Museum of Art, the Whitney Museum of American Art, the Brooklyn Museum and the MoMA, of course.

And walking through NYC is still possible to relive the atmospheres of his paintings: it comes to my mind the redbrick buildings, the windows of the apartments and the windows of the Greenwich Village stores, the diners with the neon signs and the exposed windows, the insides of an old movie theater in Broadway or also a simple hotel room lit by the morning sun of the beginning of Summer. 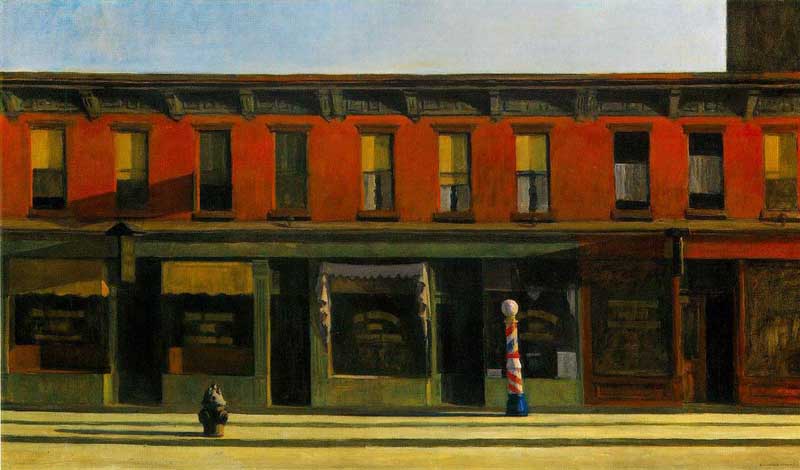 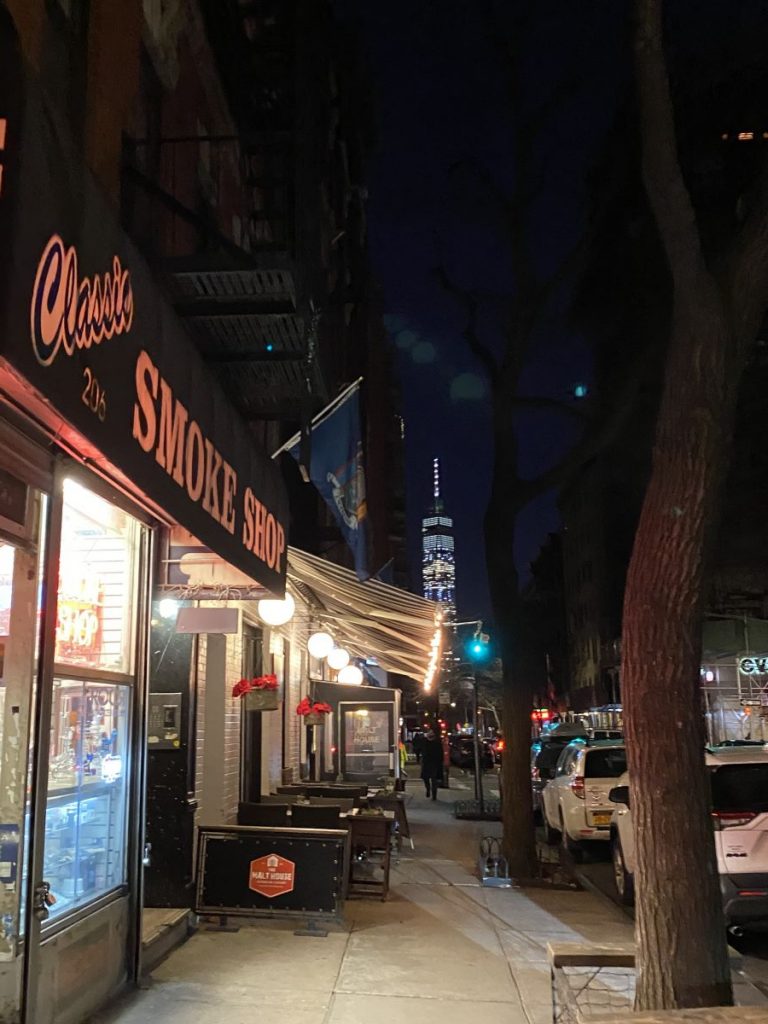 Edward Hopper places in the USA: New York, the locations of “Sunday Morning” 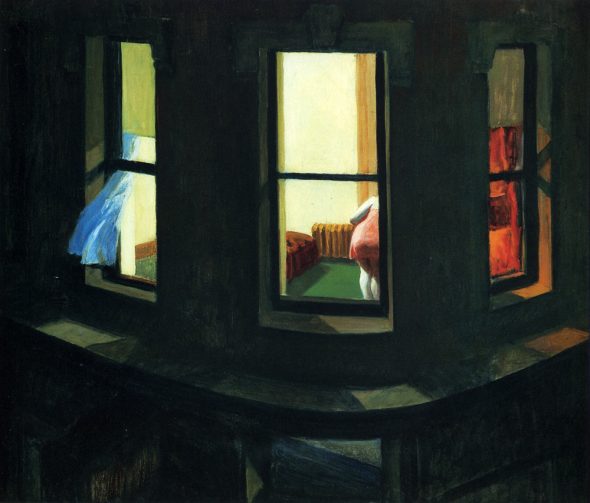 But the most important site to understand his art remains his home-studio in Washington Square Park.

The Edward Hopper Studio – also known as The Row – was the place where Edward Hopper and his wife Josephine lived from 1913 until their death: he died on May 15, 1967 and she died in 1968, after only 9 months.

It is located at the third floor of one among the three townhouses that now host the New York University Silver School of Social Work at 3, Washington Square North. 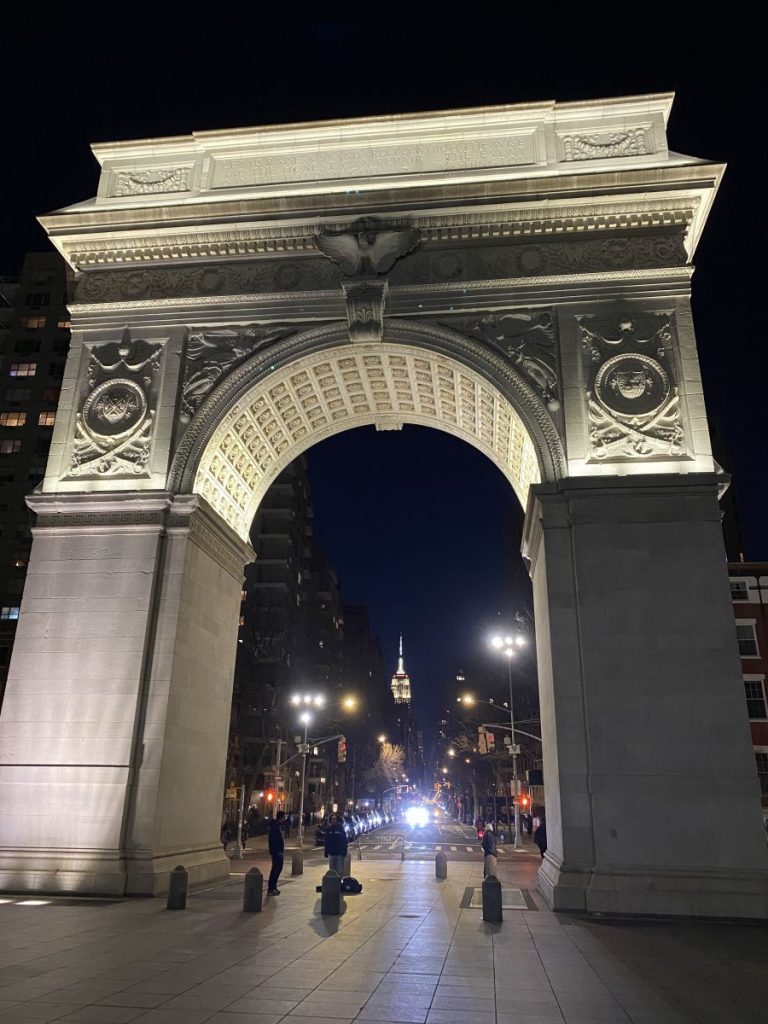 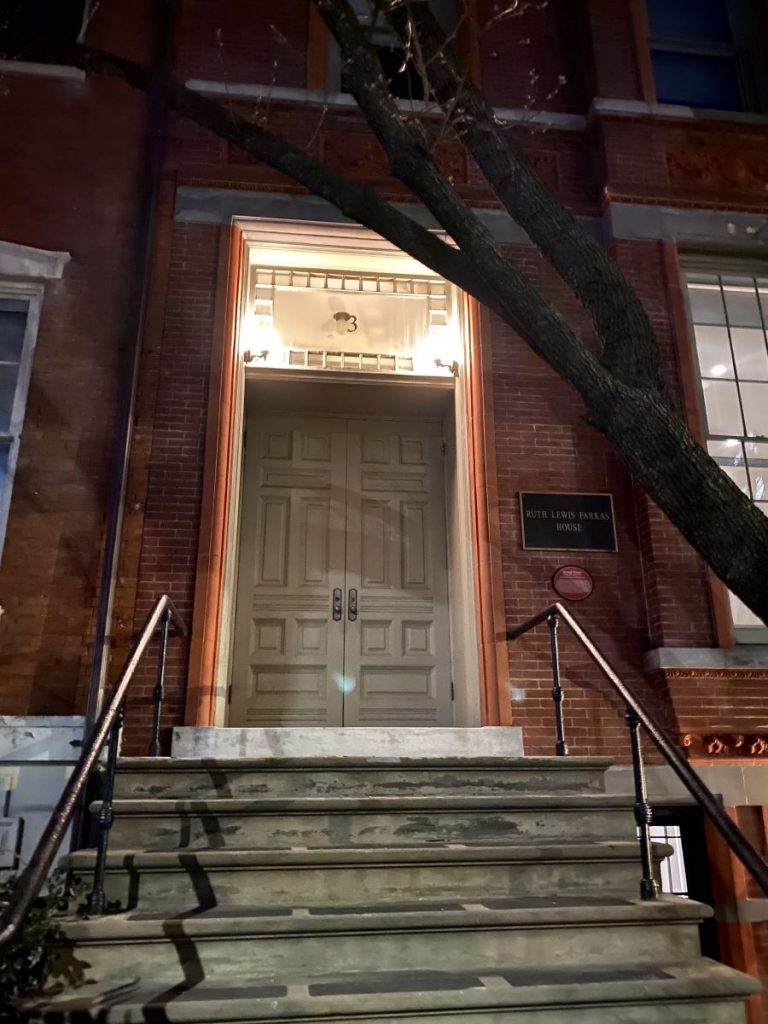 The Studio has been faithfully preserved with the aim to make it a sort of cult place and motivation and model at the same time for students, artists and lovers.

The tour allows to get into Hopper’s daily life, mainly long hours’ work, preparation, waiting the inspiration and sharing with Josephine, his only and one muse.

There is still the special easel he built personally to support his canvas, his printing machine, some of his brushes, the old stove, a small bookcase and the frontal windows that – as well as that one in his bedroom in Nyack – gives a scenic view. This time not of the Hudson River, but of Washington Square Park.

You’ll be able to perceive the unique atmosphere that created over time in those two rooms. In Summer days so much light enters them that turning instinctively the look towards the outside you’ll become unaware protagonists of one of his works. A really exciting experience!

Tours are strictly guided and they have to be justified by a special interest toward the artist. They can be organized exclusively upon appointment contacting well in advance Amanda Lorenz, phone number 212-998-5900 or booking well in advance the Open House New York October weekend. 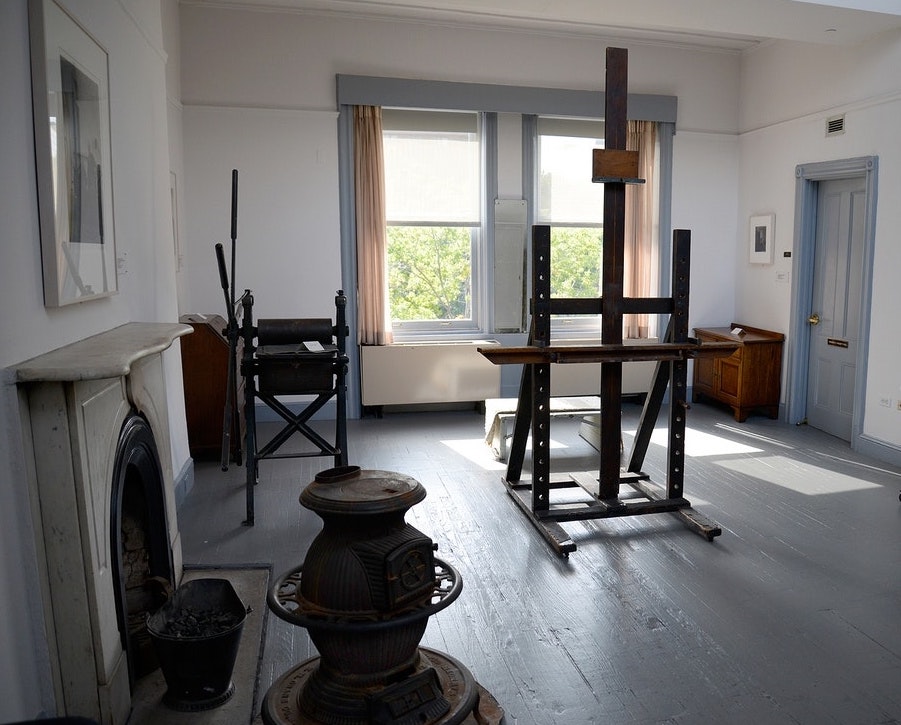 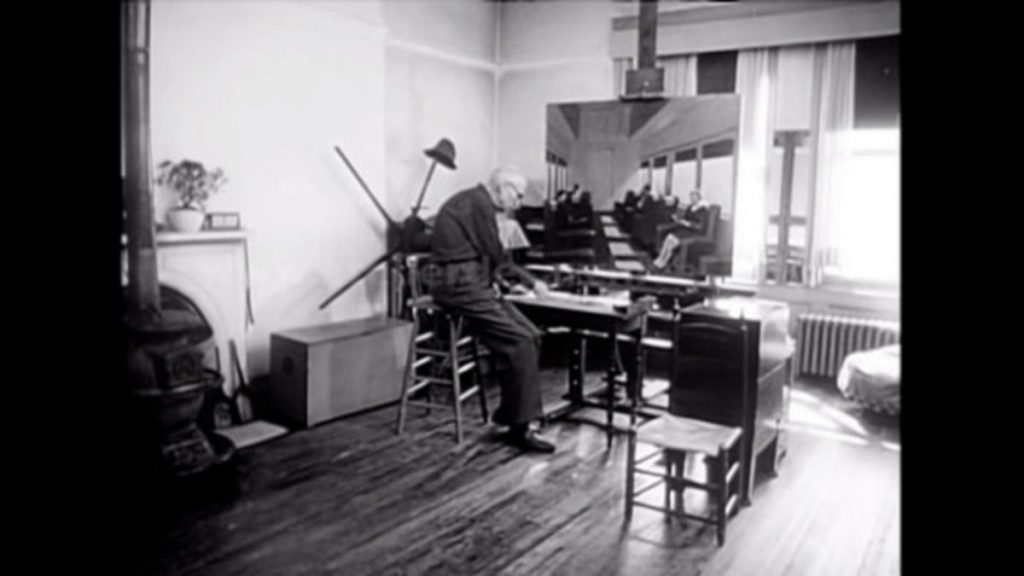 Edward Hopper places in the USA: New York, the Studio at Hopper times

A good part of the coastal New England, from Massachusetts as far as Maine is present in Hopper’s works.

The Lighthouses – become in the collective imaginary proper icons – the houses on the beach along the Cape Cod National Seashore, the windows store of the small villages, the hills enveloped by the wind from the Ocean and the crossroads are all the undisputed protagonists of his most famous paintings. 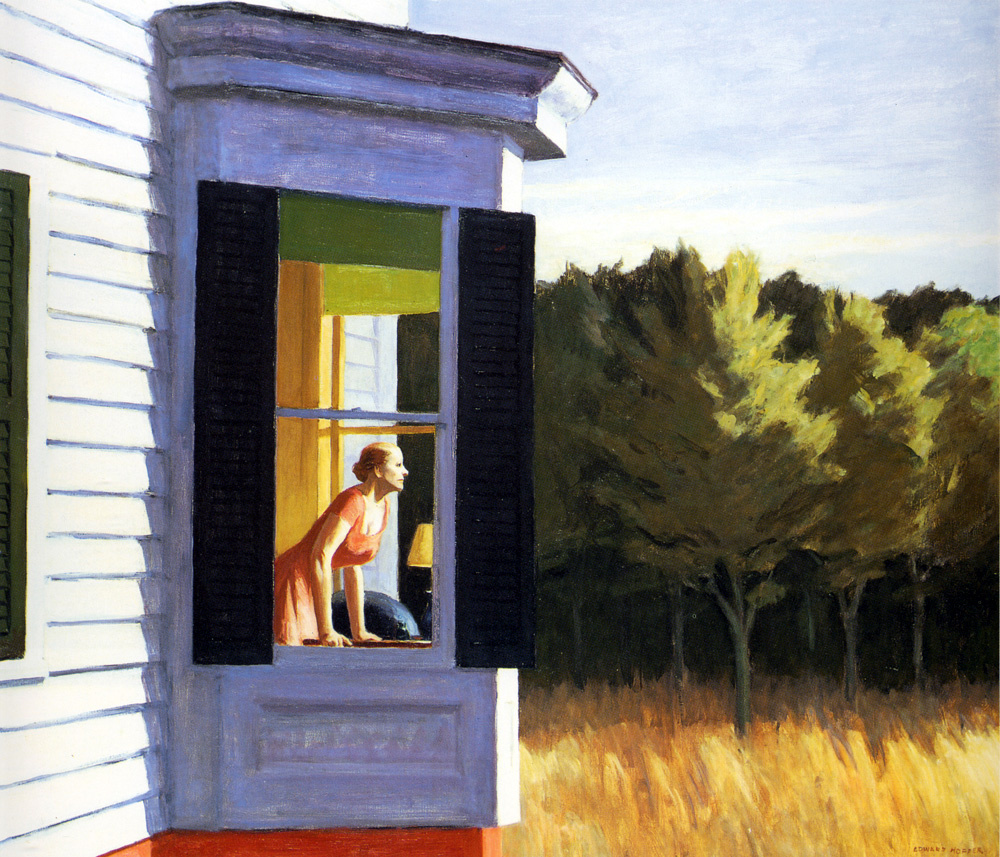 Edward Hopper places in the USA: his New England

But is in the Cape Cod peninsula – that thin and fascinating “hook of land” insinuating itself into the Atlantic Ocean, located at the furthest south of Massachusetts – that we can find the highest concentration of places painted by him. Besides the Summer home-studio in Truro, where Hopper and his wife Josephine spent the long Summer from 1930 until 1967.

And right in this house – inspired by the atmospheres and the lifestyle of the most authentic and rural Massachusetts – Hopper painted over a third of all his works.

It comes to my mind the Highland Lighthouse, the Rich’s House, the Lewis Farm. The High Road, the South Truro Hills at Sunset, the North Truro Cottages. All real places made immortal by his canvas. 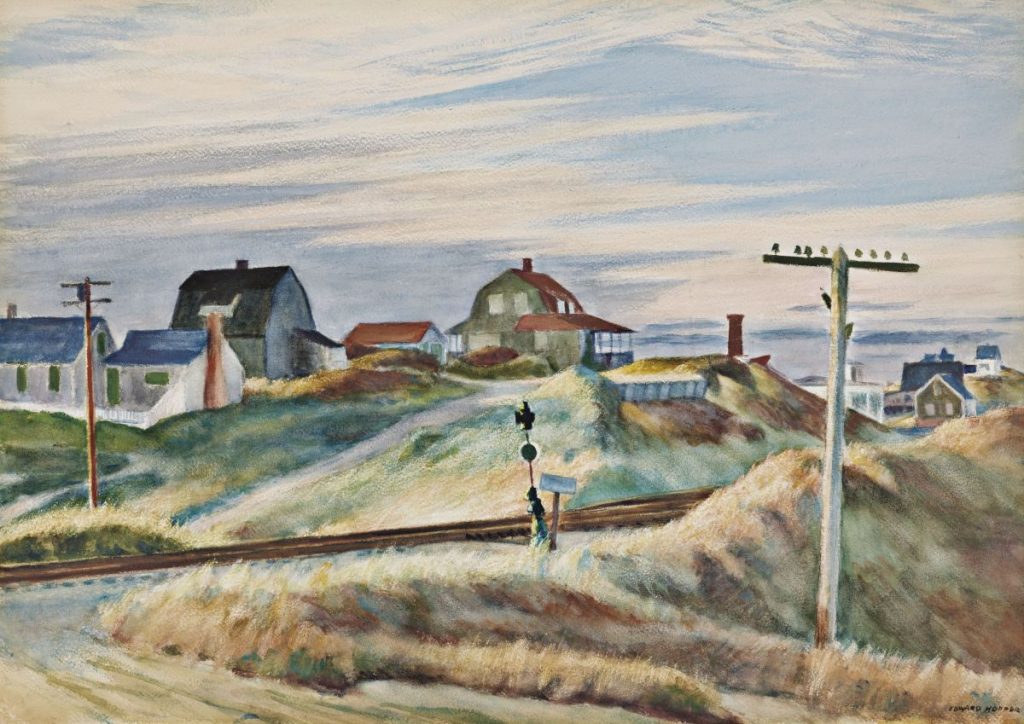 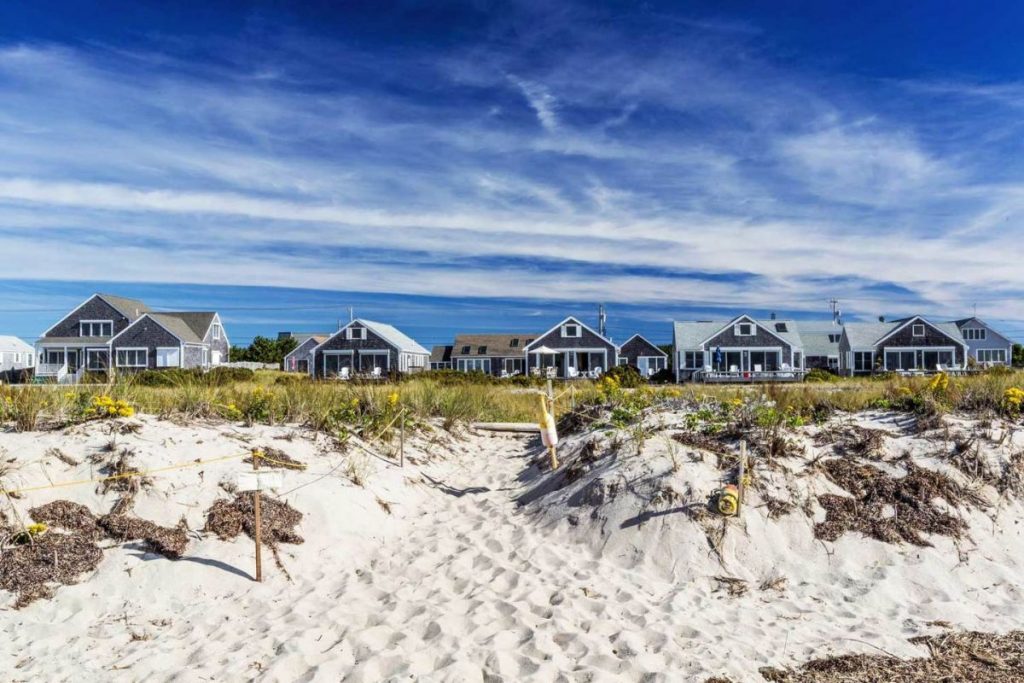 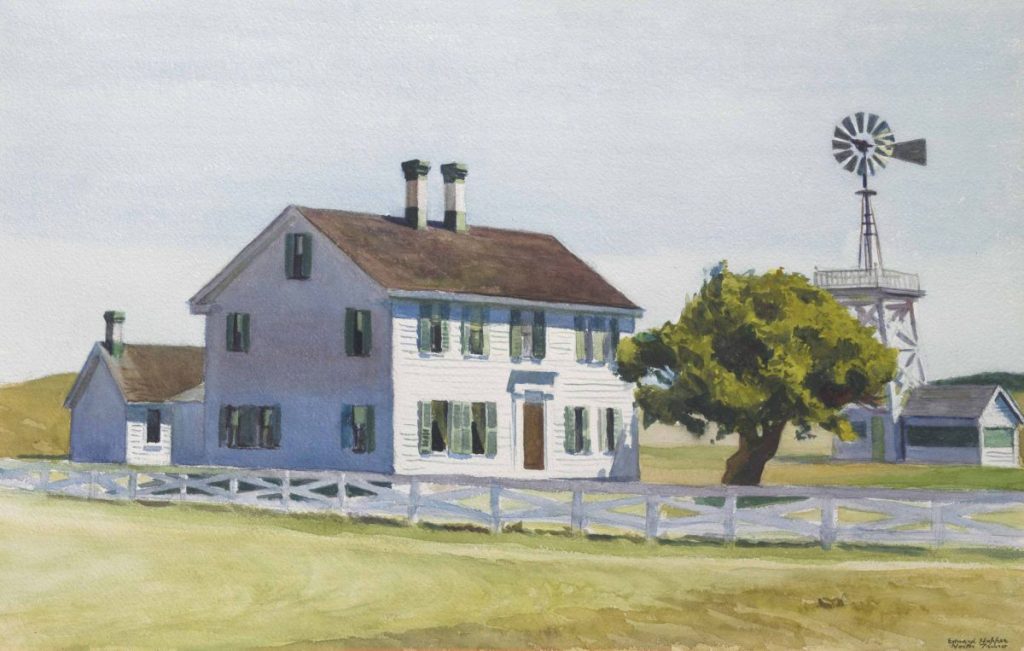 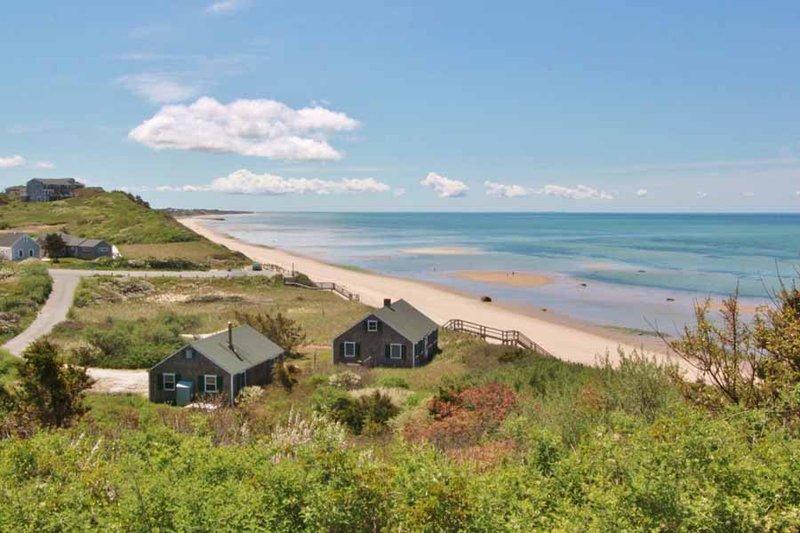 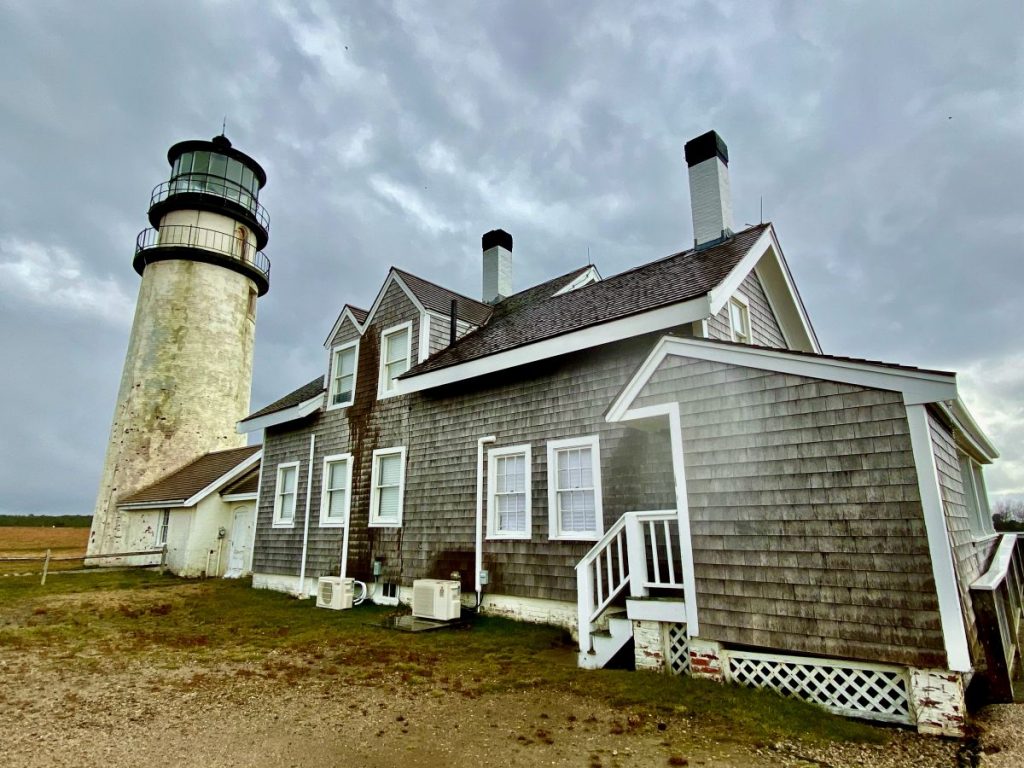 Unfortunately, his house cannot be visited inside: admission is only allowed to students with dissertations about the author and artists searching for inspiration.

However, it is possible to take part into a guided tour – at the moment exclusively in English – allowing to admire from the outside his home-studio and discover the original sites that inspired his most famous works. 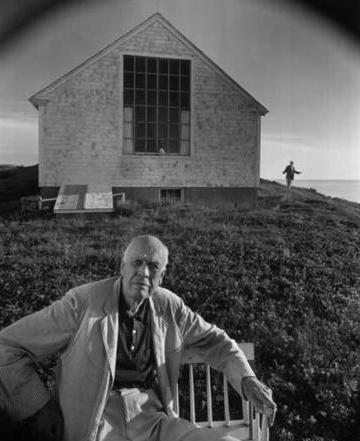 Always in Truro at the Highland House Museum of the Truro Historical Society – 6, Highland Light Road North Truro – it is possible to see a permanent exhibition dedicated to the work and life of Edward and Josephine Hopper. 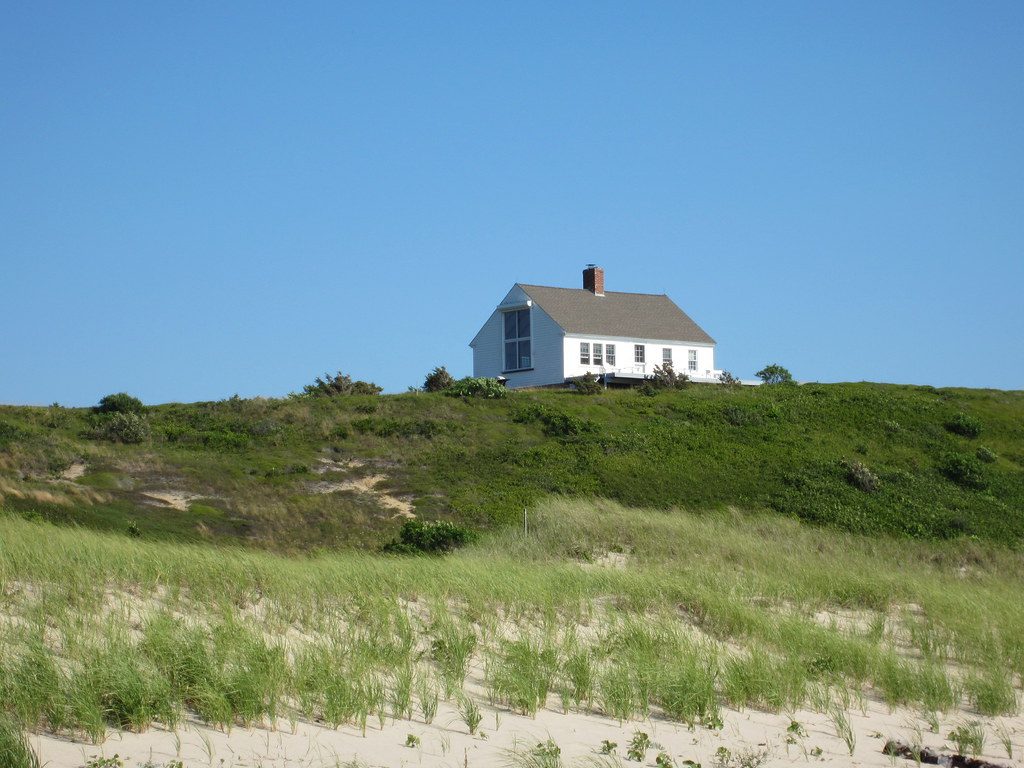 For insights about further Edward Hopper’s places in Massachusetts, I recommend you to look up the official website of Massachusetts.