7 things to do in Portland, Oregon: local experiences, unusual locations, stories and a mini-itinerary

What to see in Mendocino County, California: 5 locations and paths not to miss

7 things to do in Portland, Oregon: local experiences, unusual locations, stories and a mini-itinerary 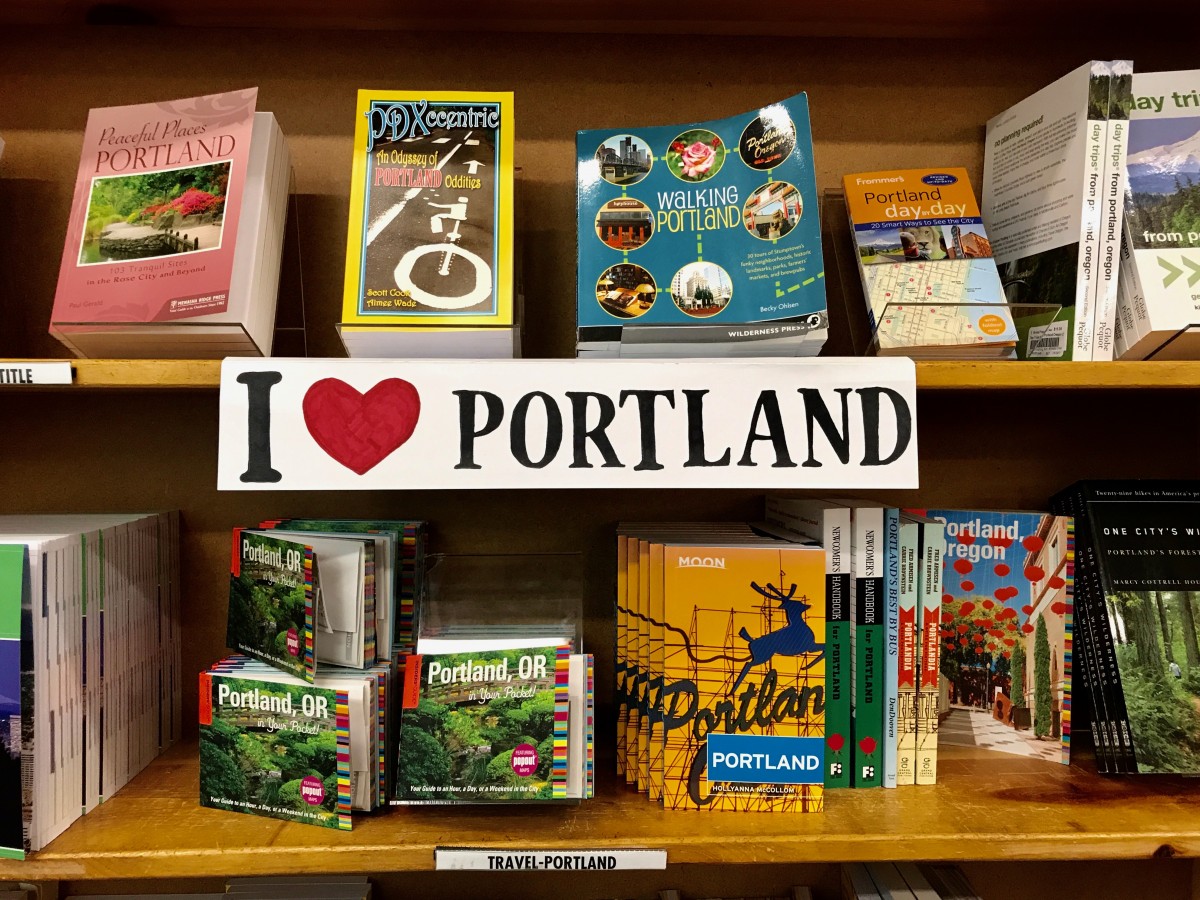 It’s easy to run the risk of falling into the obvious and linger over what every classic travel guidebook indicates in the two, three pages max, dedicated to it.

Nothing more wrong. Trust me. 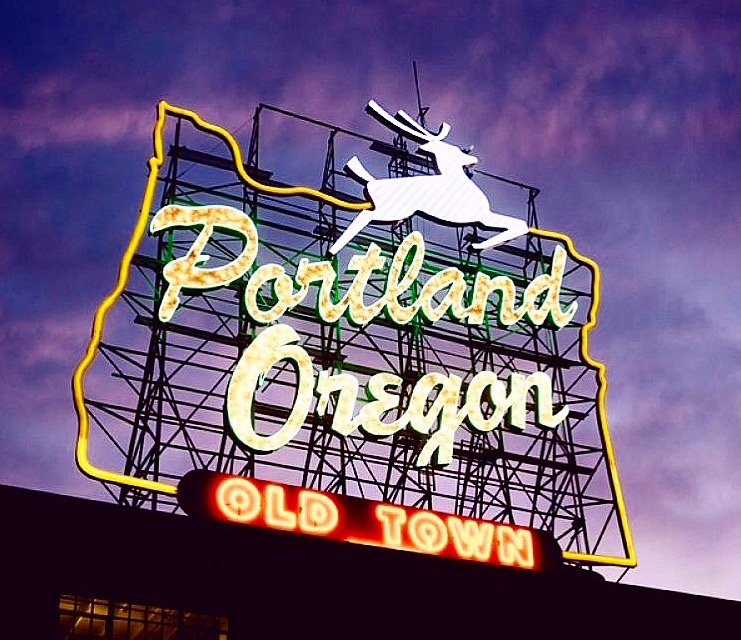 It colors the grey of its omnipresent rain with the bright shades of old industrial depots over time turned into lofts, art galleries and innovative companies.

It speaks hundred languages and related accents and it brings out as many if not in a major number local and typical cuisine and an endless series of traditions, all strictly to respect.

Portland is the city of bridges and bicycles, the independent bookstores, the streets’ names which inspired The Simpsons characters, the free thought, the welcome – almost always unconditional – and the “Ducks”, the mythical and celebrated baseball team.

It’s the city of the micro-breweries, the Voodoo Doughnut and the Food Carts, the ethnic food trucks crowding the downtown streets and parking at lunchtime. 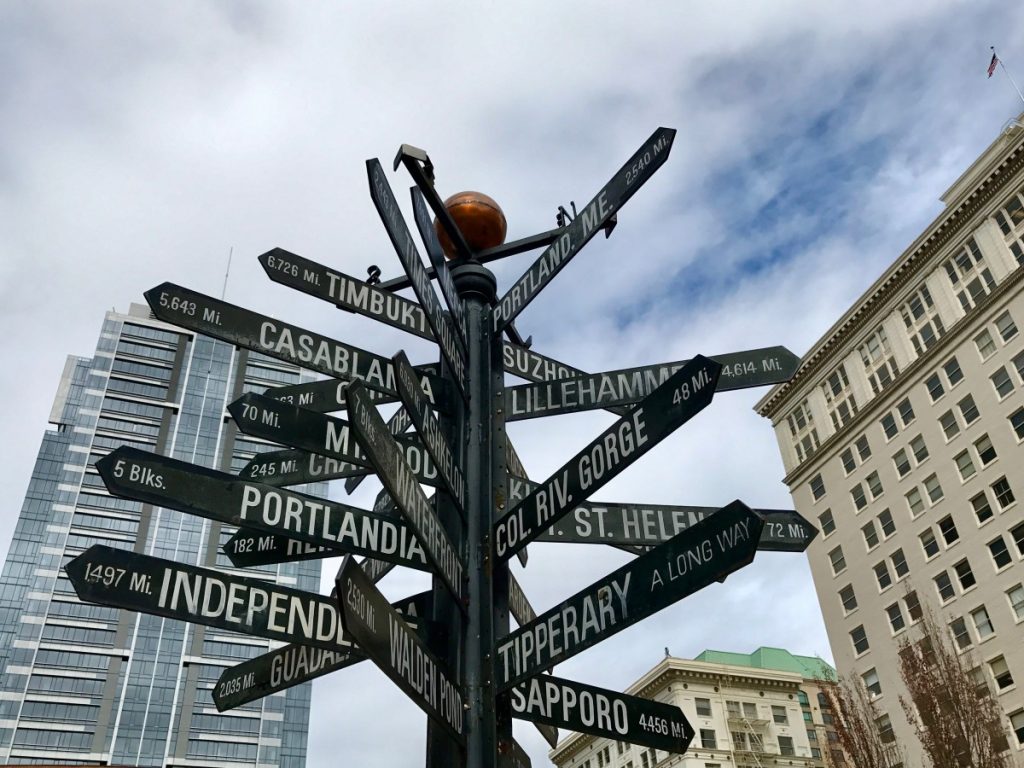 I’d swear to have seen there a bit of Seattle, the big heart of New York and some hints of European passion and fantasy.

Down here – selected on purpose for you – there are 7 experiences not to be missed and things to do in Portland if you have at least one day in your hands, two even better.

7 locations, original stories and paths, usual and unusual, which will take you discovering many souls of the city and will give you the chance to enjoy it – for whole the time of your visit – like real locals. 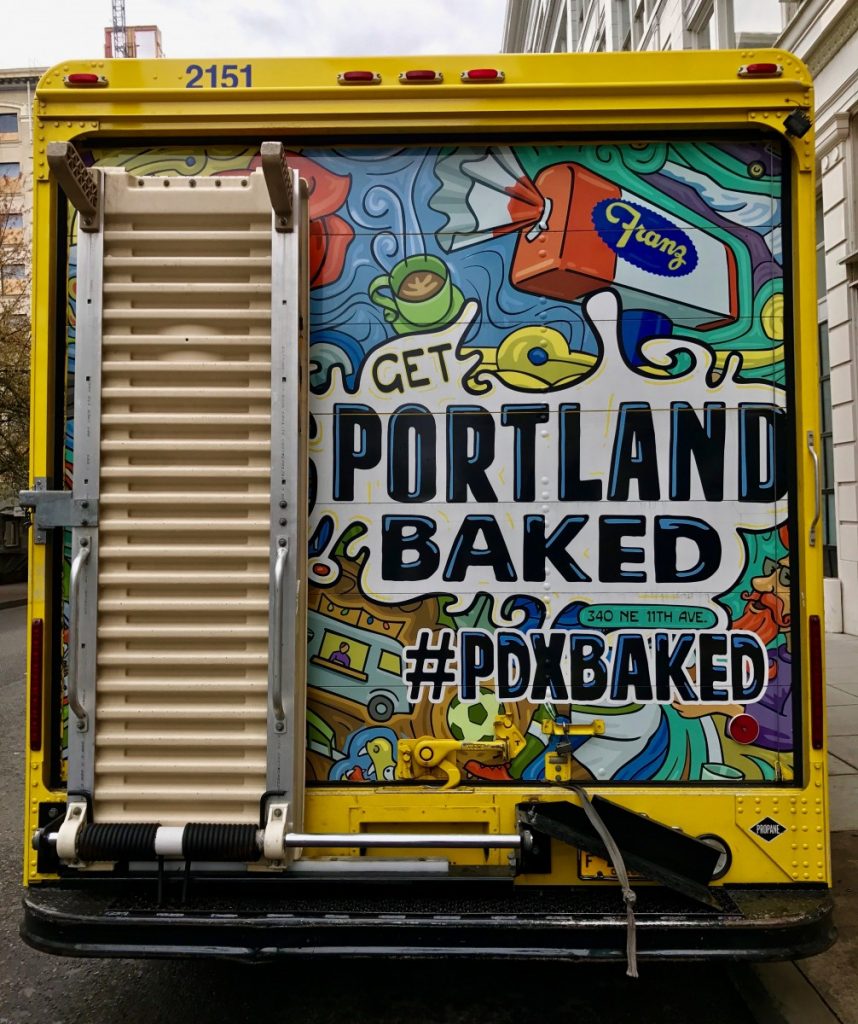 7 things to do in Portland between colors and multiculturalism

7 things to do in Portland, Oregon: a walk from Old Town as far as the Riverplace Marina, following the flow of the Willamette River

About a couple of hours walk: leaving from the heart of the Old Town it allows to go through some of the most lively and variegated areas of Portland.

From the promenade under the “old” and suggestive Steel Bridge (one among the 11 lift bridges crossing the Willamette River) as far as the ancient Chinatown: here it’s possible – if you want (booking quite in advance, here for further info) – to go down into the Shanghai Tunnels, the old underground passages where, between the 1800s and the 1900s, the unlucky customers of the harbor’s cafés – almost always drunk – were made “disappear” to use them as crew for the sea trade towards the East. 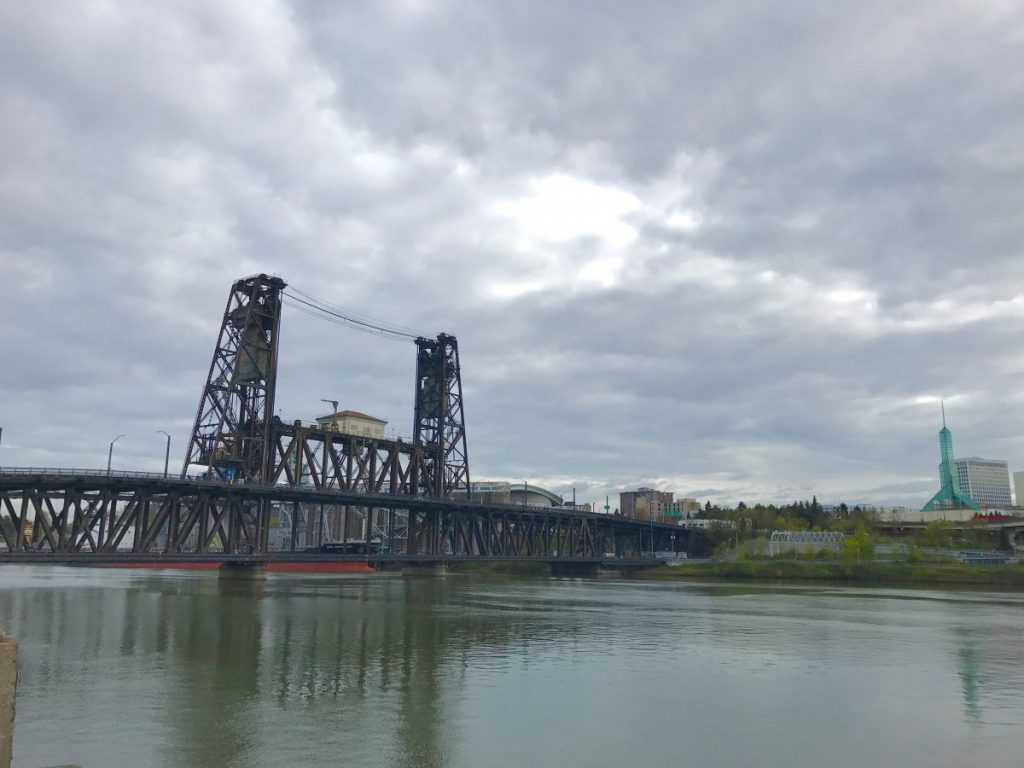 7 things to do in Portland, Oregon: admire the Steel Bridge 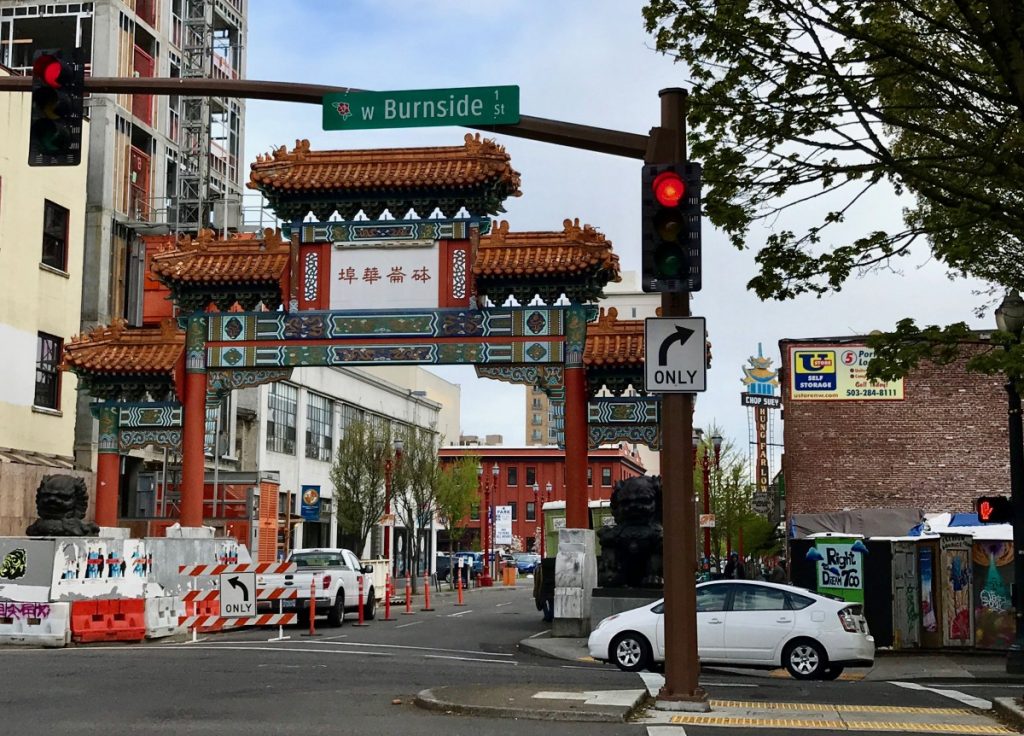 7 things to do in Portland: Chinatown 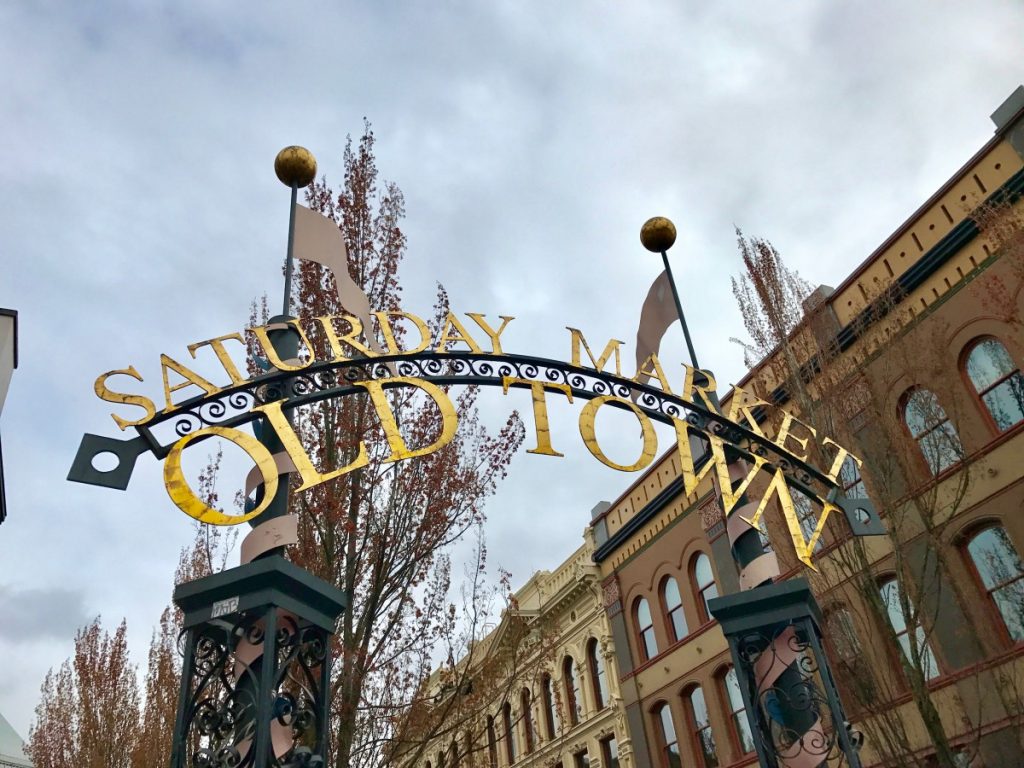 7 things to do in Portland, Oregon: Saturday Market

As far as peeping out again along the SE Front Ave, at the crossroads of the SW Ash Street where at the weekends the Saturday Market takes place: it’s a cheerful and variegate market of typical products where it’s possible to have lunch with local products and stop and admire the street artists’ performances.

Then to reach Downtown through the very central Pioneer Courthouse Square, the original (and eccentric, according to someone) Portland Building, architectonic symbol of the postmodernist movement in the city and the museums area, among SW Park Ave and SW Madison and Jefferson St. Then, if you want to find out more about Oregon and Portland history, the Oregon Historical Society cannot be missed.

And then come back along the river to relax in one on the cafés in the Riverplace Marina, a nice tourist marina rich in stories, restaurants and venues where to spend the hot summer evenings. 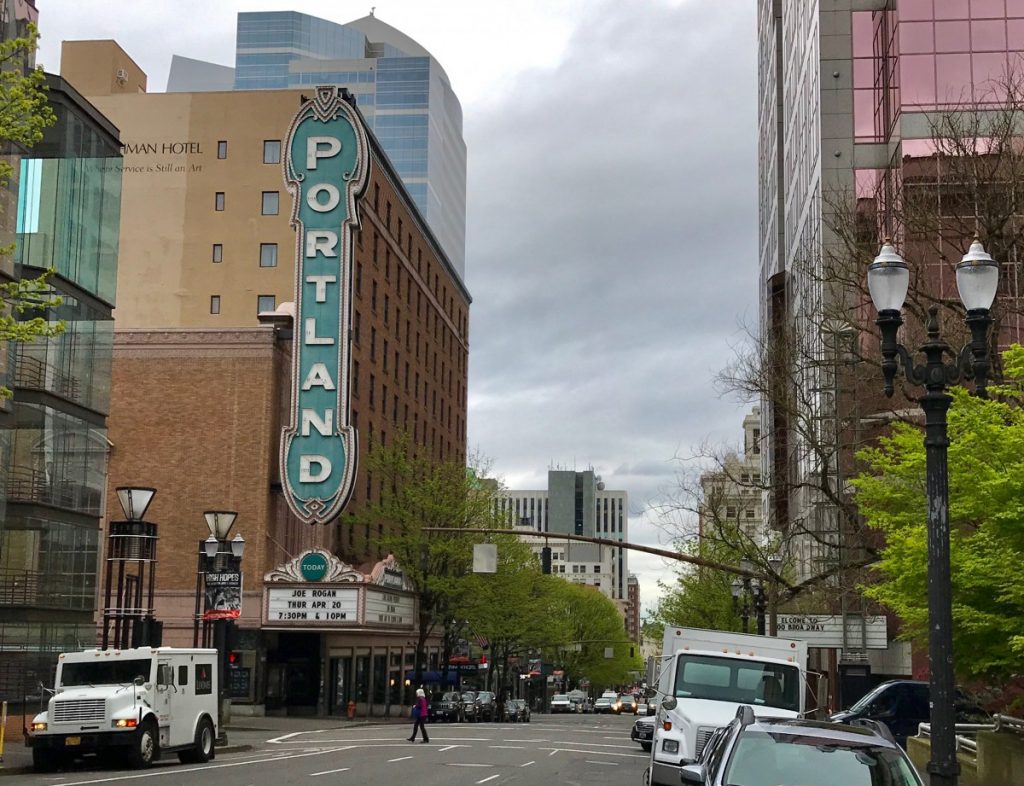 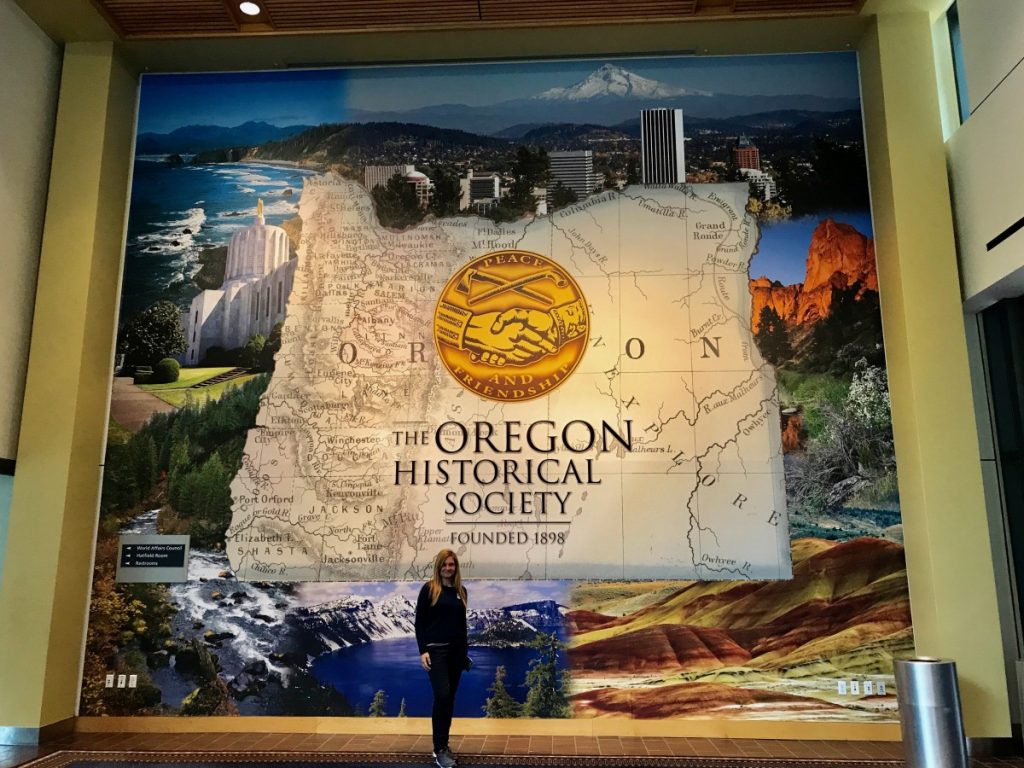 7 things to do in Portland: visit the Oregon Historical Society 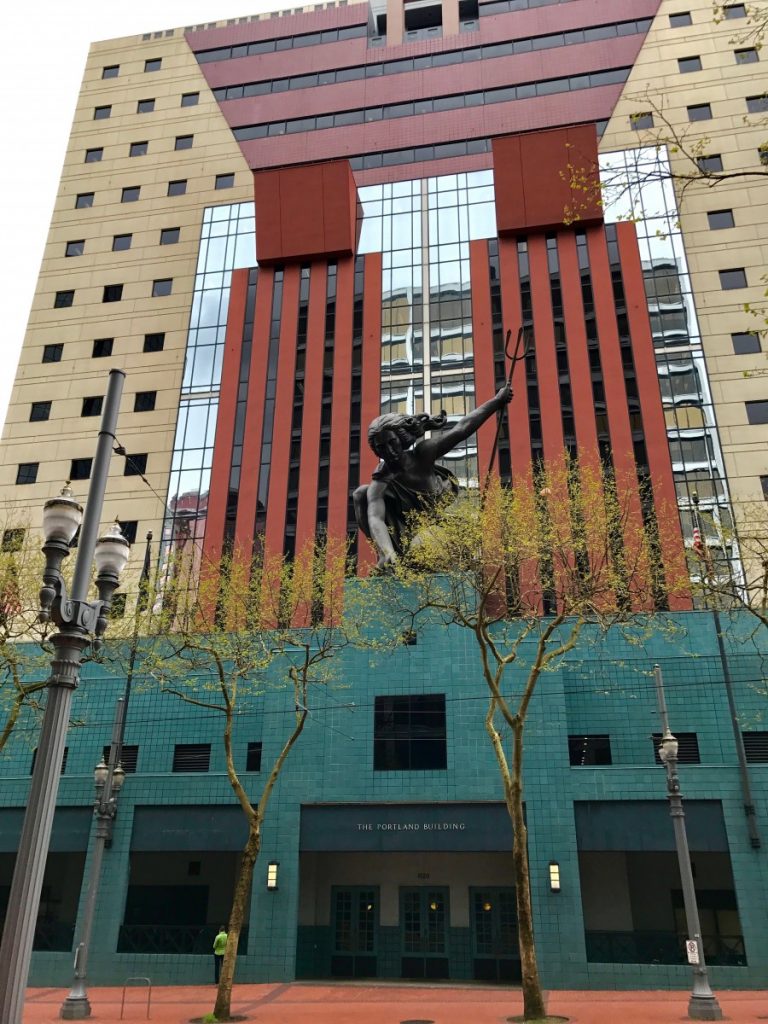 7 things to do in Portland, Oregon: have lunch in a Food Cart

One of the best ways to go in touch with the many cultures that literally “live together” and proliferate in Portland is to give oneself a savory and cheap gastronomic break in one among the several Food Carts crowding parking and streets at lunchtime.

More than Food Trucks – the street food trucks present in every American city – we talk about downright street restaurants offering the most authentic and variegate cuisines from all over the world: Mexican, Thai, Vietnamese, Greek, Lebanese, even Italian, et cetera. 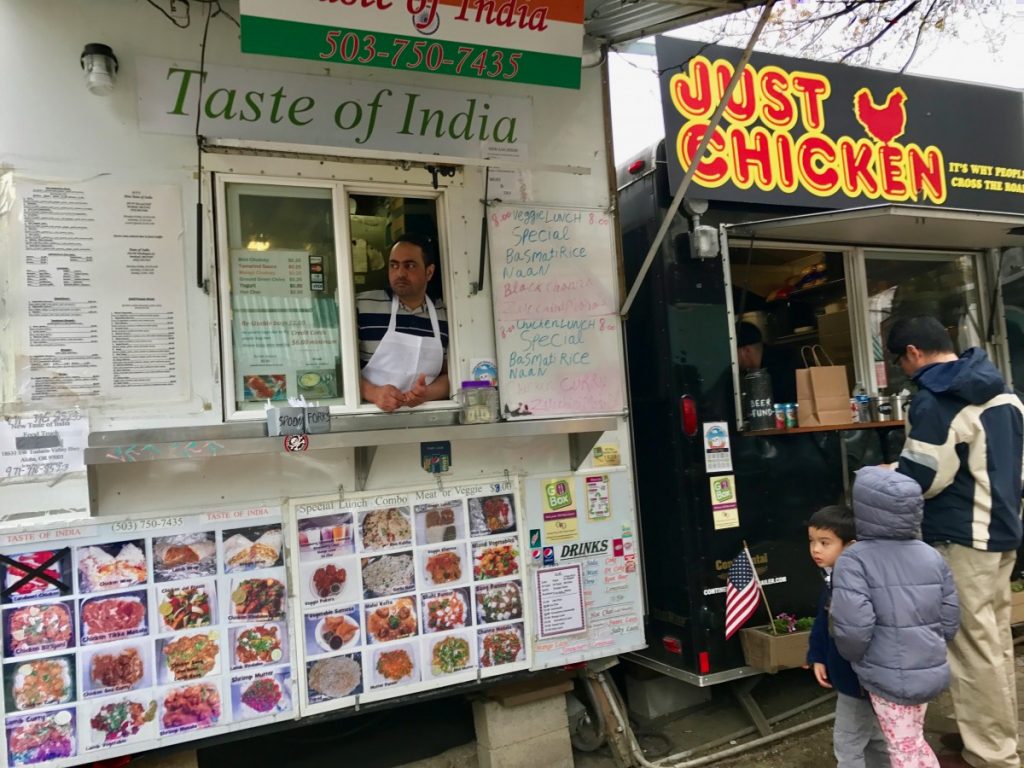 7 things to do in Portland: eat in a Food Carts

They are Portland’s answer to the economic crisis that about ten years ago forced many restaurants to close the doors due to the impossibility of their owners to be able to cover the expenses: so the idea to keep doing it – in full respect of hygienically rules, always and however granting the same products’ quality – in moving frameworks with a remarkable save and several local incentives.

They are organized in small groups gathering in specific areas of the city, with chemical toilets, benches and tables and an official website where it’s possible to know daily where to find one’s favourite carts and find out the weekly events related to the street food.

One of the major crowd point at lunchtime is the big downtown parking among the 9th Ave, SW Alder and SW Washington Street. 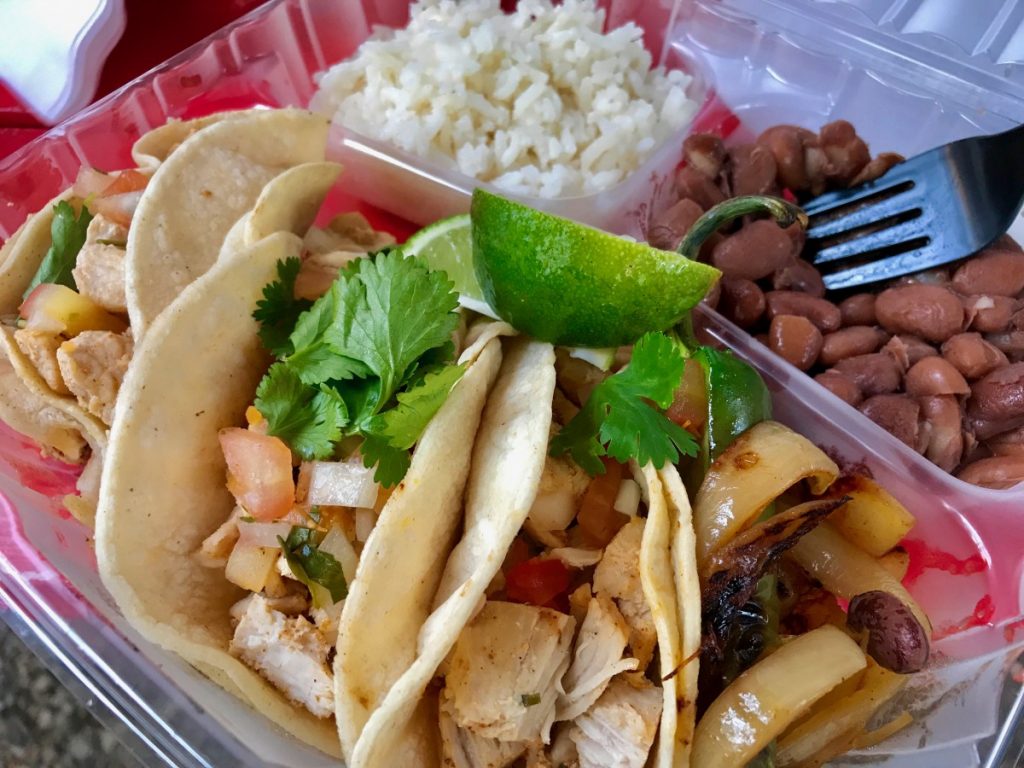 7 things to do in Portland: my lunch at the Mexican Food Carts

7 things to do in Portland, Oregon: drink a coffee browsing among the used books of the Powell’s City of Books

“The Powell’s City of Books is the largest (and famous) independent bookstore in the world. It embodies the soul, the thoughts – a sort of ideal interpretation of the city – and the most authentic spirit of Portland… keep reading”

Take time to browse among the bookshelves of used books, chat with the very kind employees to get further local tips about Portland, looking for info about your favourite authors, the rare texts which cannot be found in the Rare Book Room and about the events scheduled in the city during your stay. 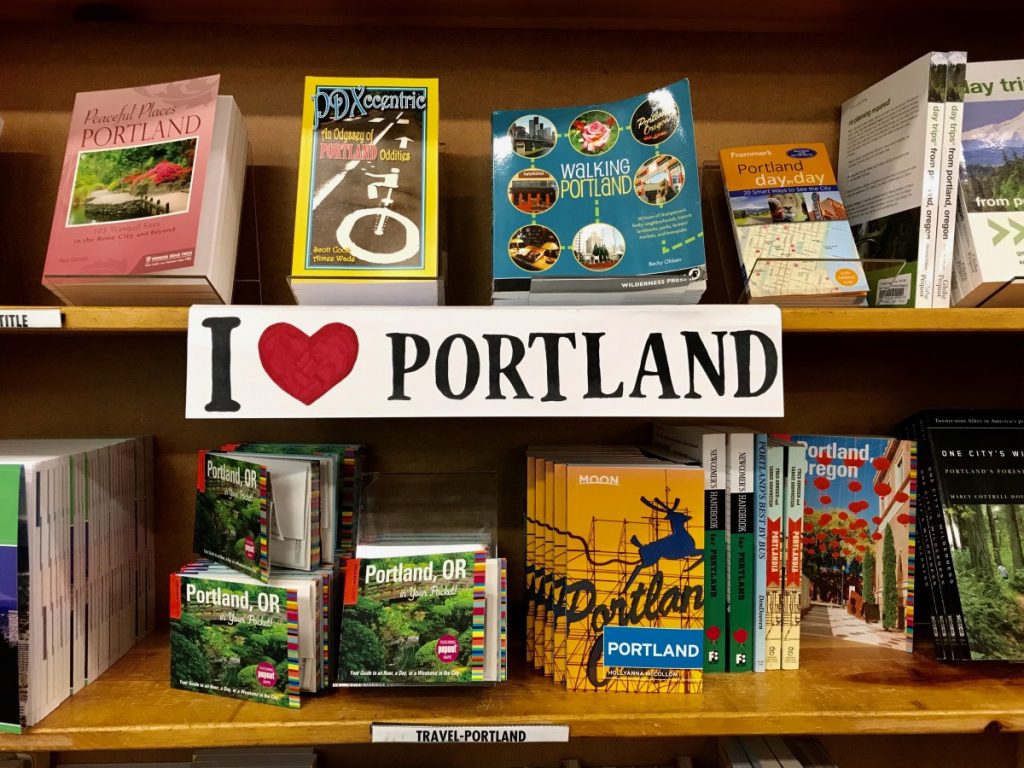 7 things to do in Portland: visit the Powell’s Books

Maybe drinking a hot and very good Espresso or American at the Espresso Book Machine and enjoy fully the atmosphere and that spirit of open-mindedness and welcome – as for the usual as for the new and one who is different: then you’ll seem not being able to give up it anymore.

The Powell’s City of Books is located at 1005, Burninside Street and is opened 7 days a week 9am-11pm. 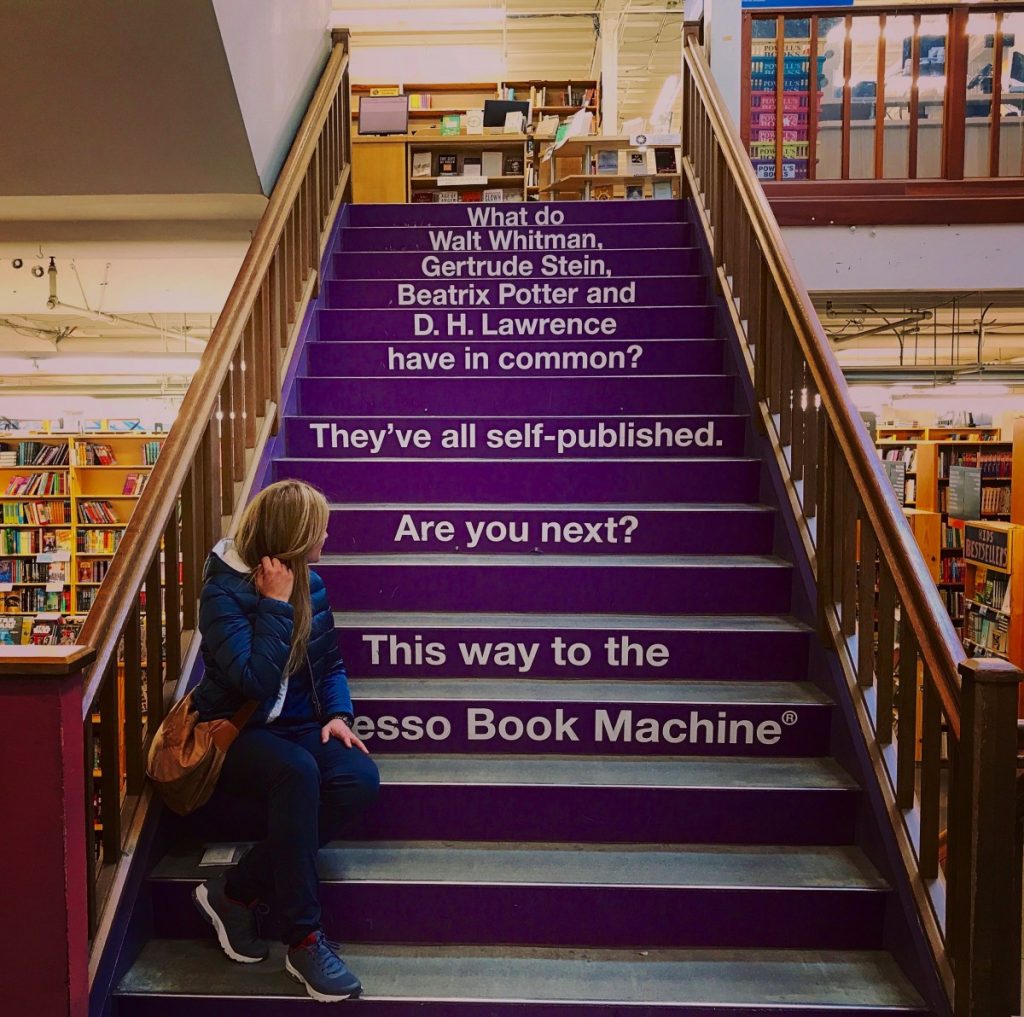 What to see in Portland: discovering the Powell’s City of Books

7 things to do in Portland, Oregon: eat a Voodoo Doughnut in the first, unmistakable store (and discover its story)

The Voodoo Doughnut one is a whole American story, made of inventiveness and great stubbornness.

Imagine two friends without any money and job with the desire to start a successful activity in their home town – Portland – and a series of disastrous attempts on their back.

Then the brilliant idea: arriving as far as Los Angeles to learn making the doughnut from the best pastry cooks of the west coast and then create a new version of them at one’s home, definitely more original and captivating, the Voodoo Doughnut with the Voodoo doll shape, garnished with chocolate and colored sugars. A bomb in every sense, caloric and successful. 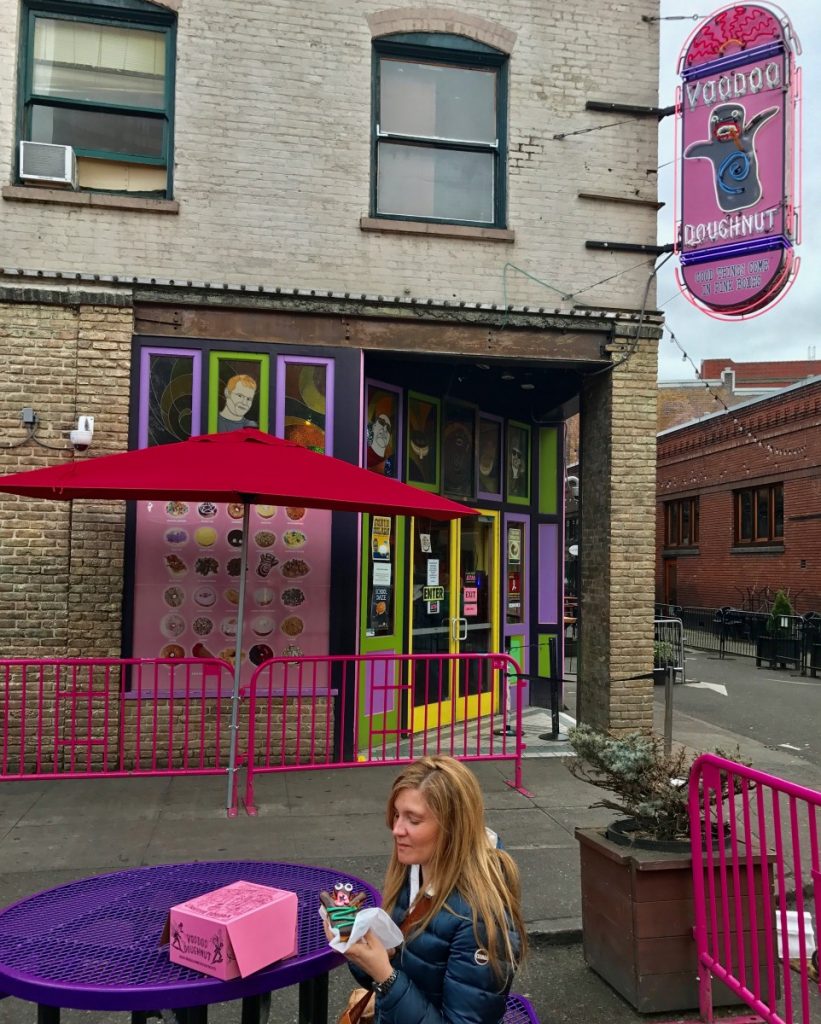 7 things to do in Portland, Oregon: eat a Voodoo Doughnut in the first, unmistakable store 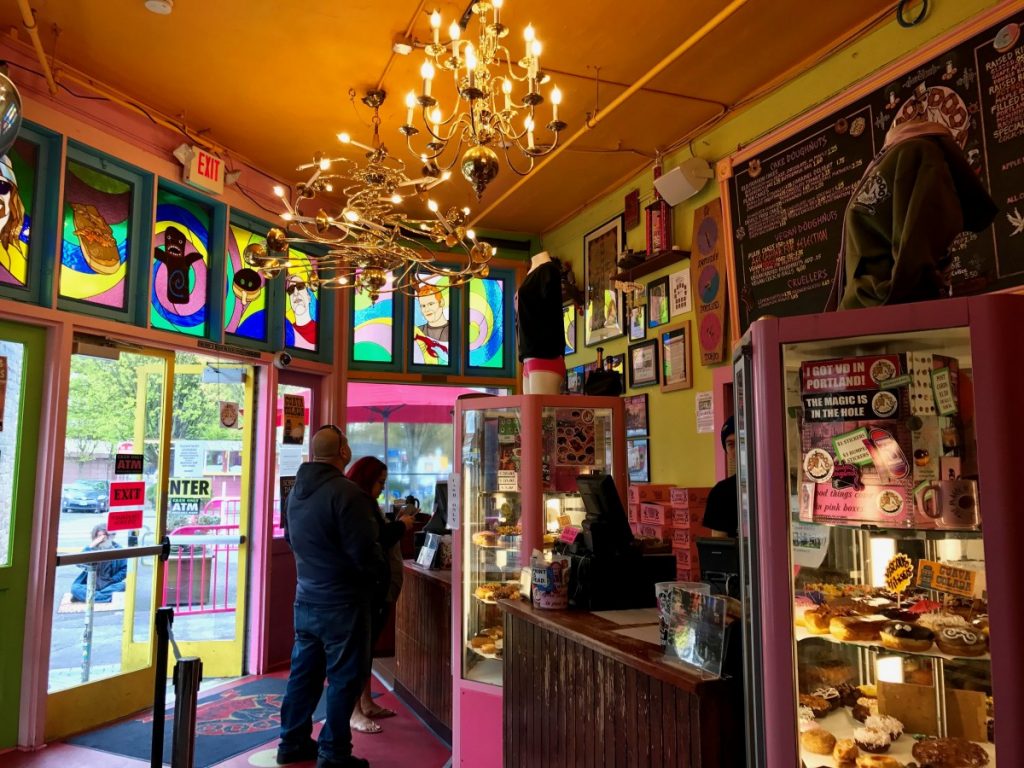 7 things to do in Portland, Oregon: eat a Voodoo Doughnut in the first, unmistakable store

Today the Voodoo Doughnut has a selection of enviable doughnuts to make the most famous bakeries in New York envious and it has stores in Oregon, Texas and even in Denver (Colorado). But the first authentic store is located at 22 SW, 3rd Ave.

My tip is to order the original Voodoo doll-shaped doughnut, enjoy the crazy & creepy atmosphere and make tell – crowd permitting – the story of the brand by one of the funny and kind shop assistants. 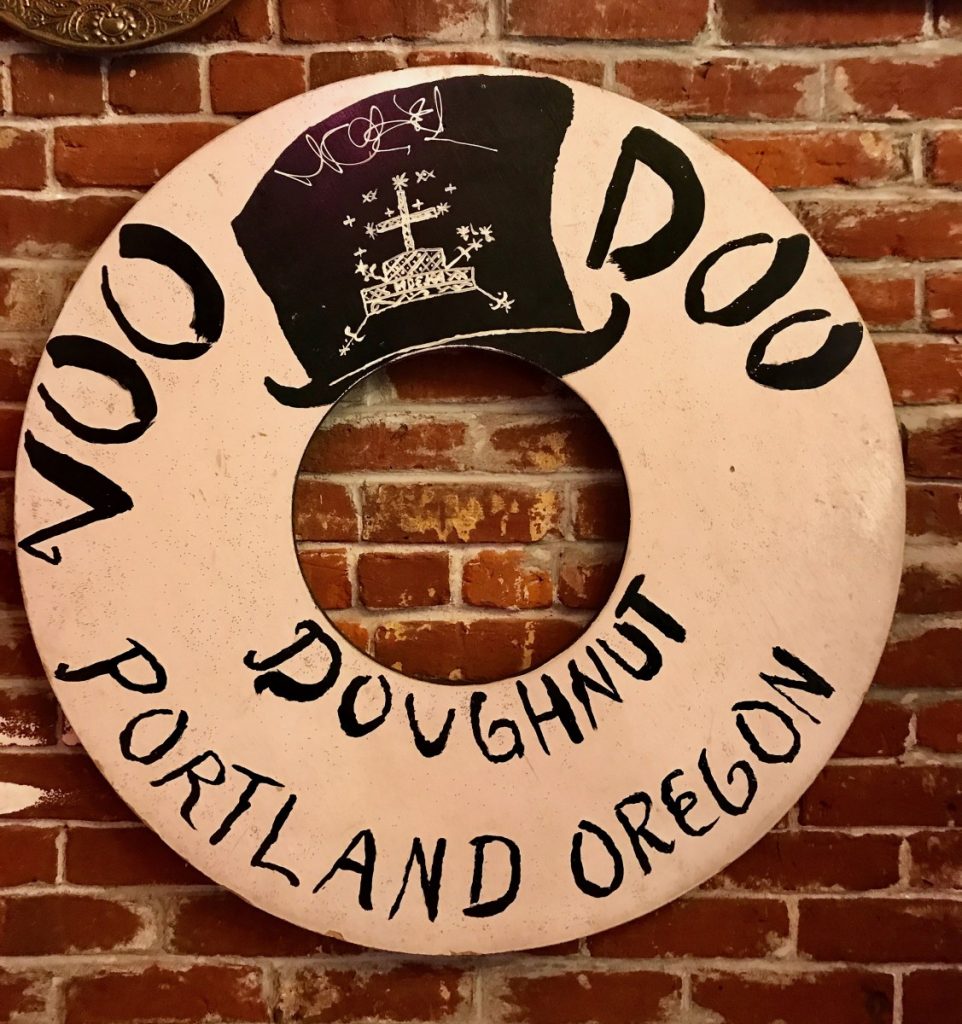 7 things to do in Portland, Oregon: a tour by Aerial Tram to admire the city from its hills

The Aerial Tram is a sort of cableway linking the extreme part of the Riverplace Marina to Marquam Hill, the hill hosting one among the most important hospitals in the state, the OSHU: it is famous also to have been the first – in line with the spirit of Portland – to have made “difference” a precious added value, favoring the integration of the different cultures populating the city also in the study and the practice of medical science. 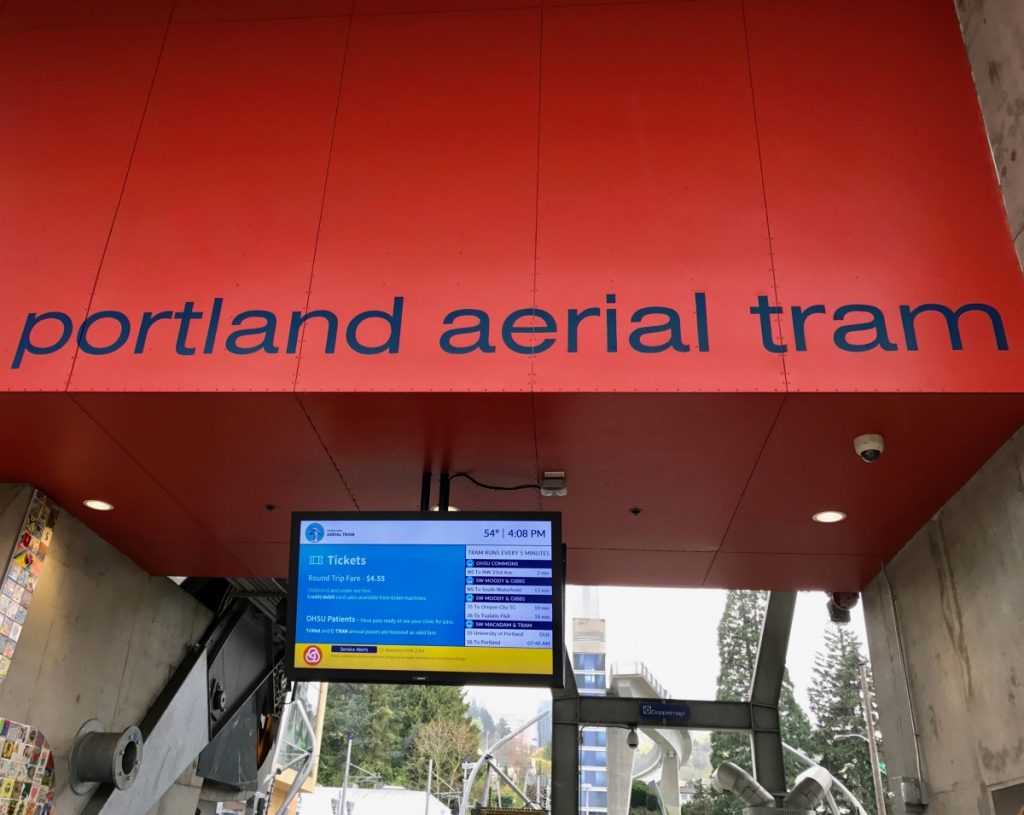 7 things to do in Portland: go into the Aerial Tram 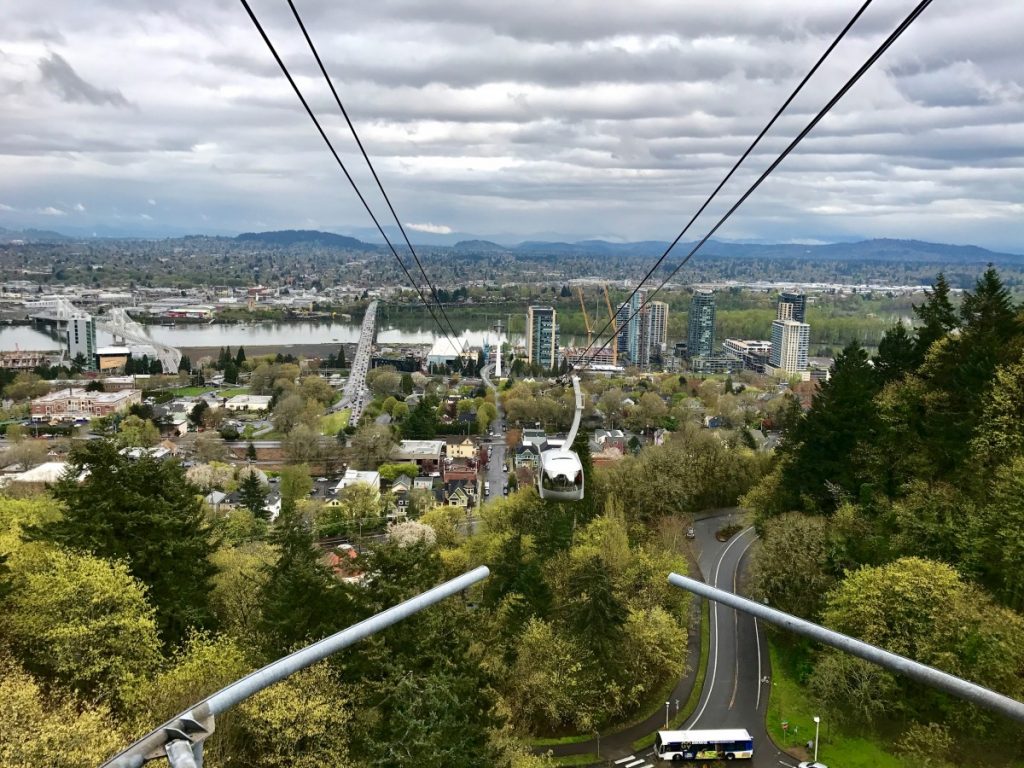 7 things to do in Portland: take the Aerial Tram

The Aerial Tram reaches in about 4 minutes the top of the hill, allowing to admire an amazing view of Portland (4,50$ return ticket), its bridges and the Willamette River. 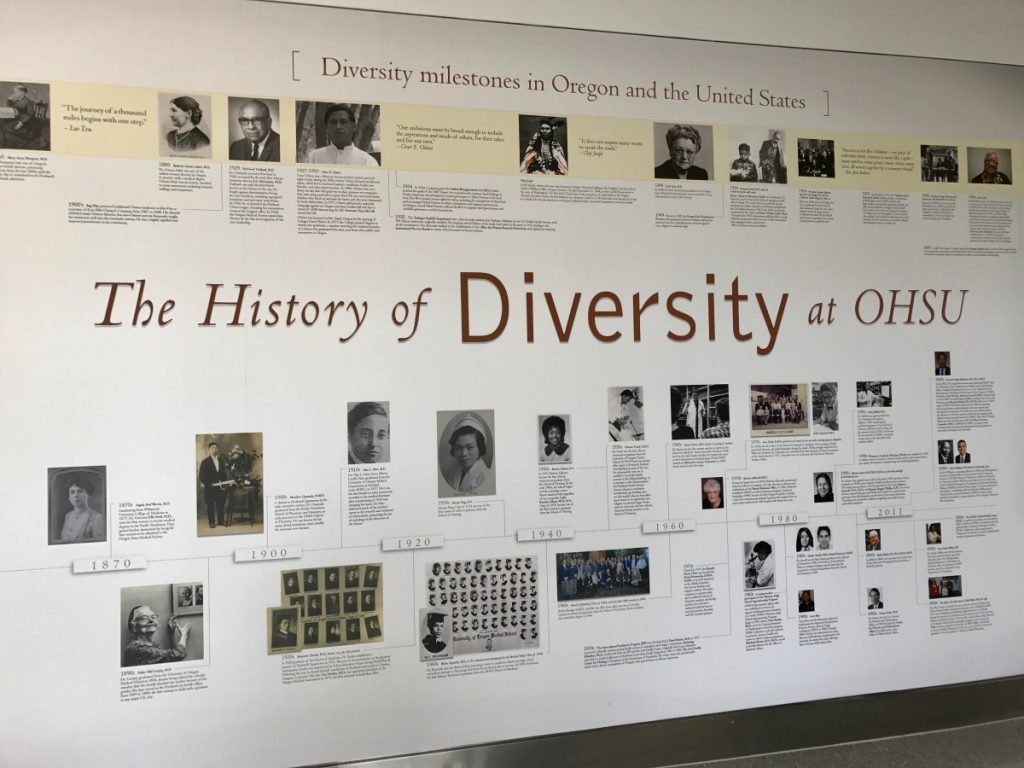 7 things to do in Portland: discover the OSHU story

7 things to do in Portland, Oregon: explore (on foot) the Nob Hill district

Nob Hill is – according to me – one among the most lively and captivating districts of Portland, a lot of colors, music, nineteenth century houses, alleys in blossom, art galleries, vintage stores, alternative venues, famous restaurants and inviting cafés where university students, families and young entrepreneurs love spending their free time.

It is located to the North East of Downtown and it is only 20 minutes far on foot and 5 minutes far by streetcar from the Old Town.

Actually it’s an ancient residential district turned over time, very coveted among the inhabitants of Portland so that it has been called (S)Nob Hill by some people. 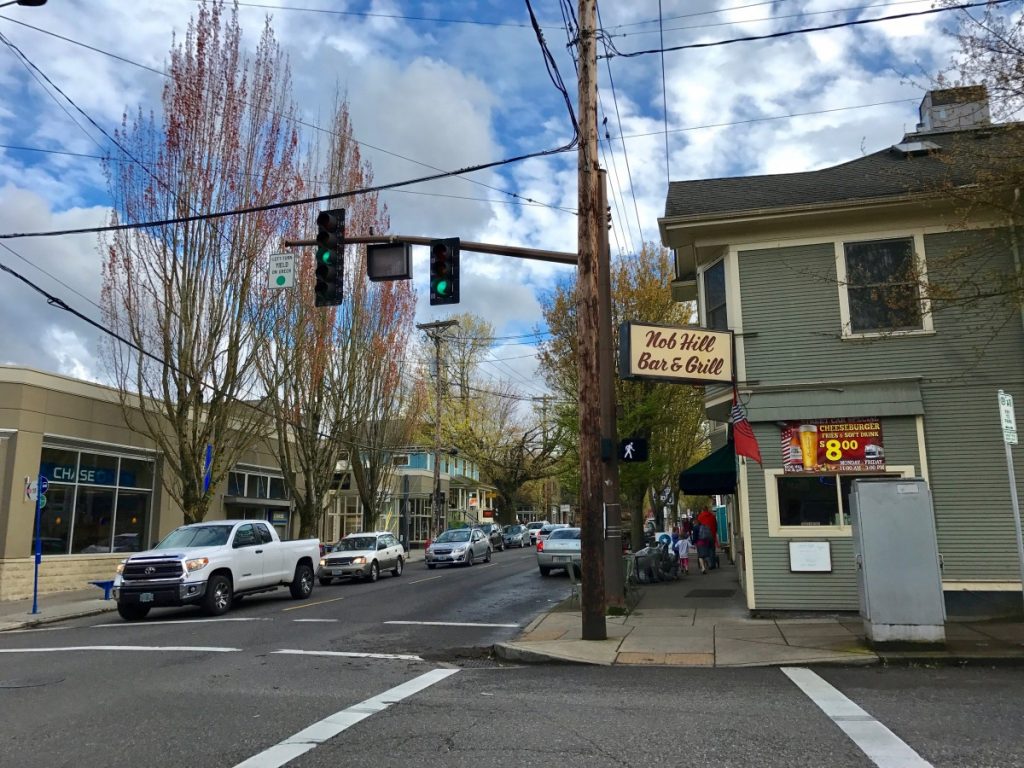 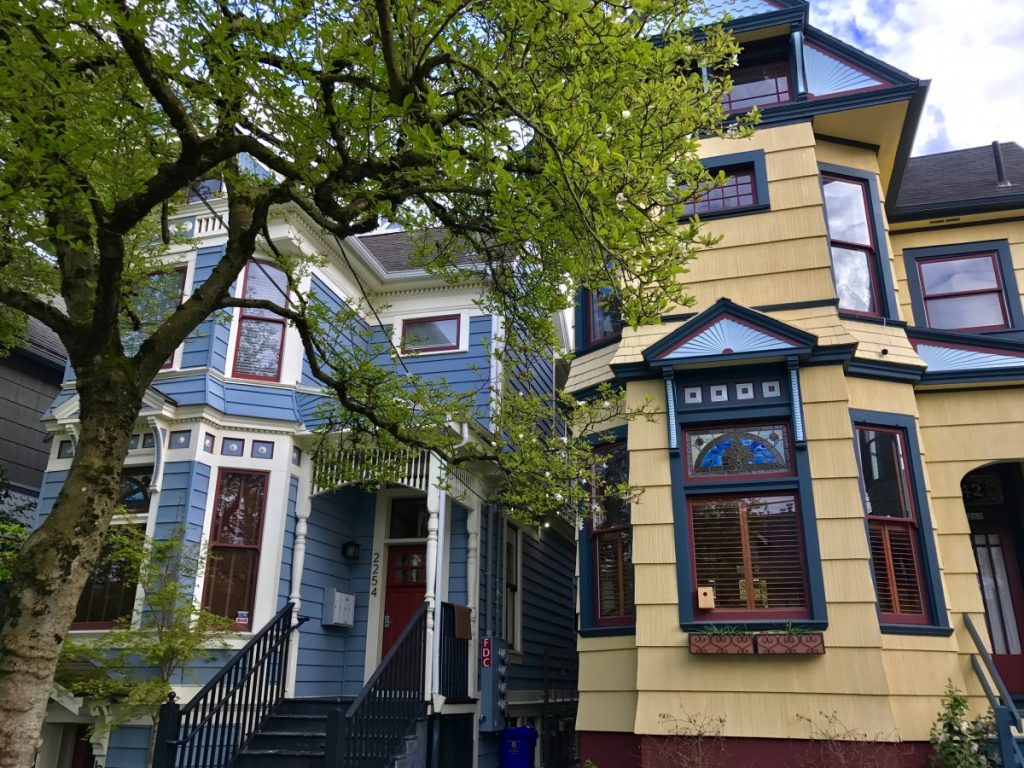 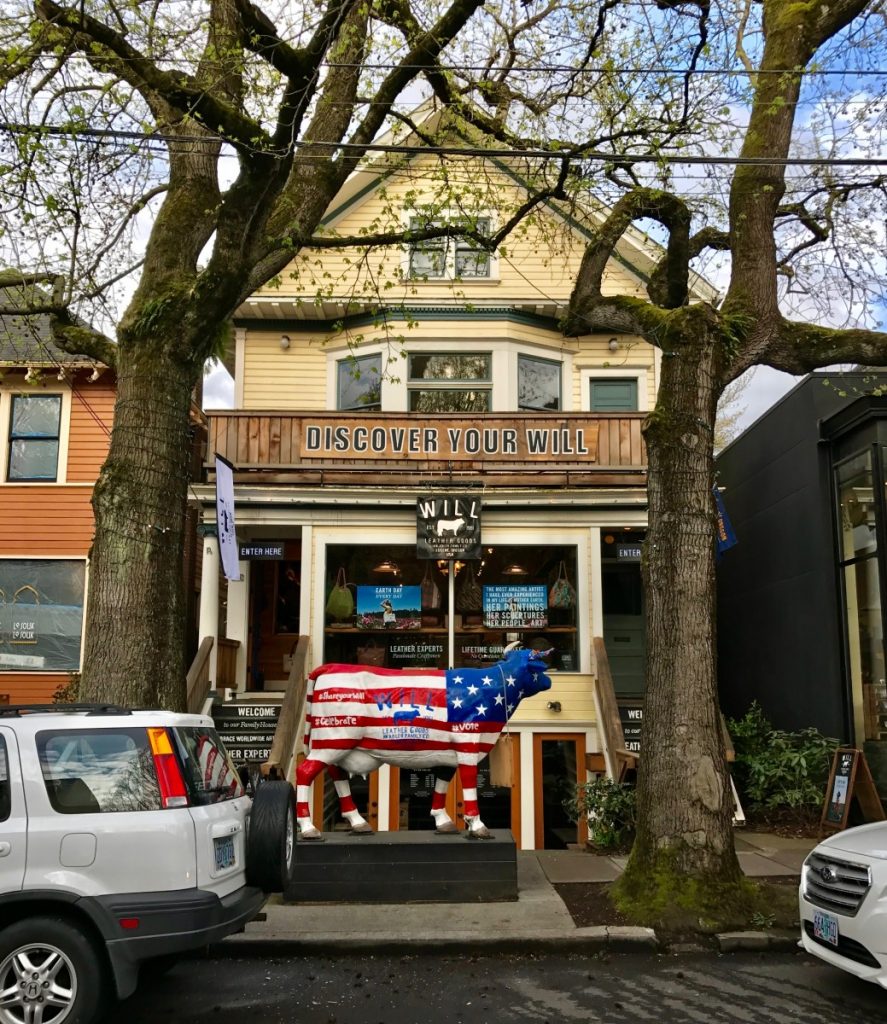 The heart of the district develops along NW 21st Ave: right from here perpendicularly a series of streets begin – arriving then as far as Old Town: probably you are familiar with the names of these streets.

They are The Simpsons’ ones, the American cartoon created by the comic-strip writer Matt Groening in 1987.

Matt comes from Portland and he has voluntarily took his cue from his home town to give names and surnames to his beloved characters. 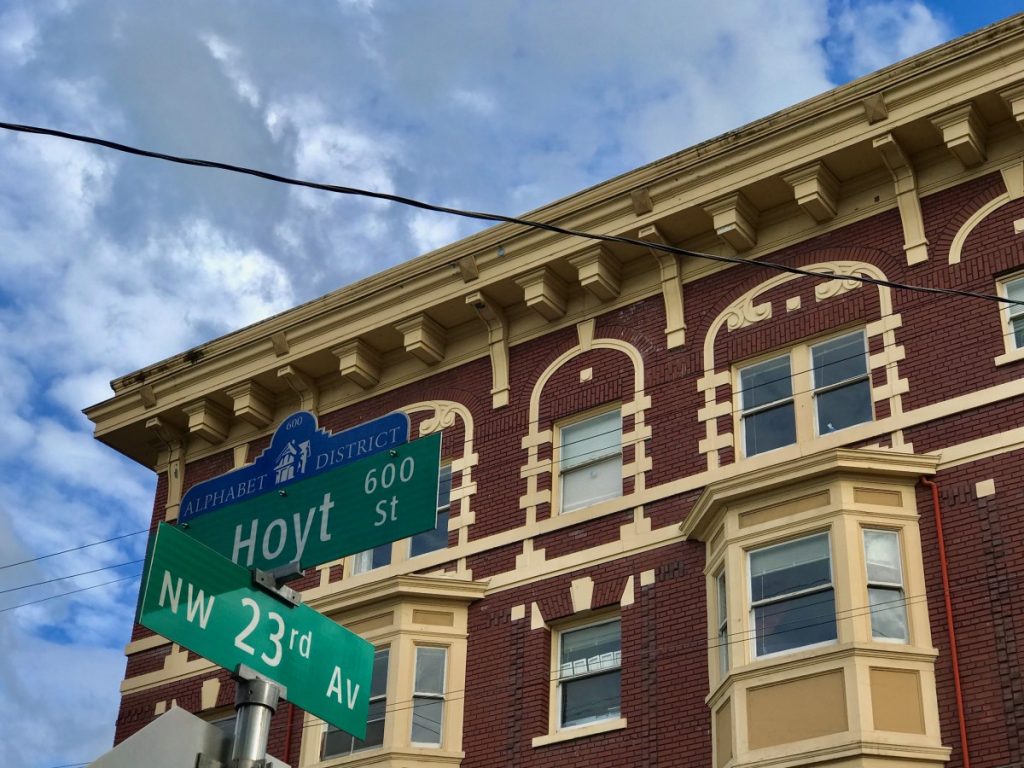 7 things to do in Portland: The Simpsons’…streets!

7 things to do in Portland, Oregon: stay overnight at the Northrup Inn to enjoy a very local experience

The Northrup Inn is located in Nob Hill at 2025, NW Northrup Street.

A really original trendy hotel got by an old industrial building, embracing completely the philosophy of the district hosting it.

Colored, cheerful, lively and comfortable, the ideal starting base to discover the city, and even remarkably cheap compared to the other Downtown hotels. 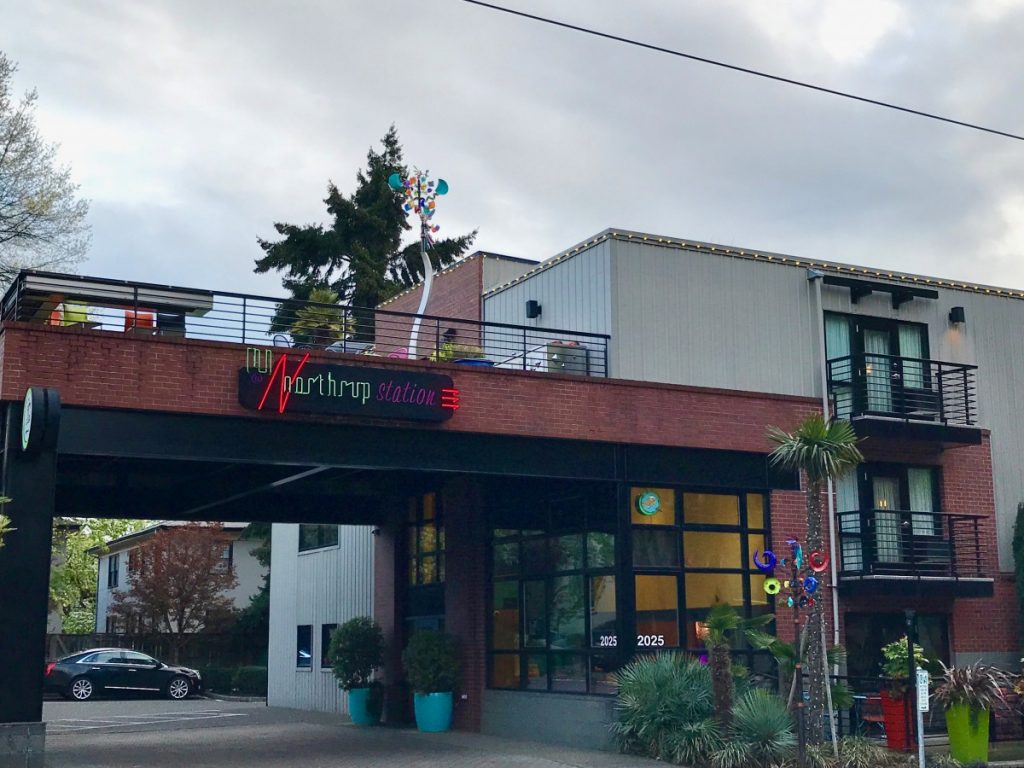 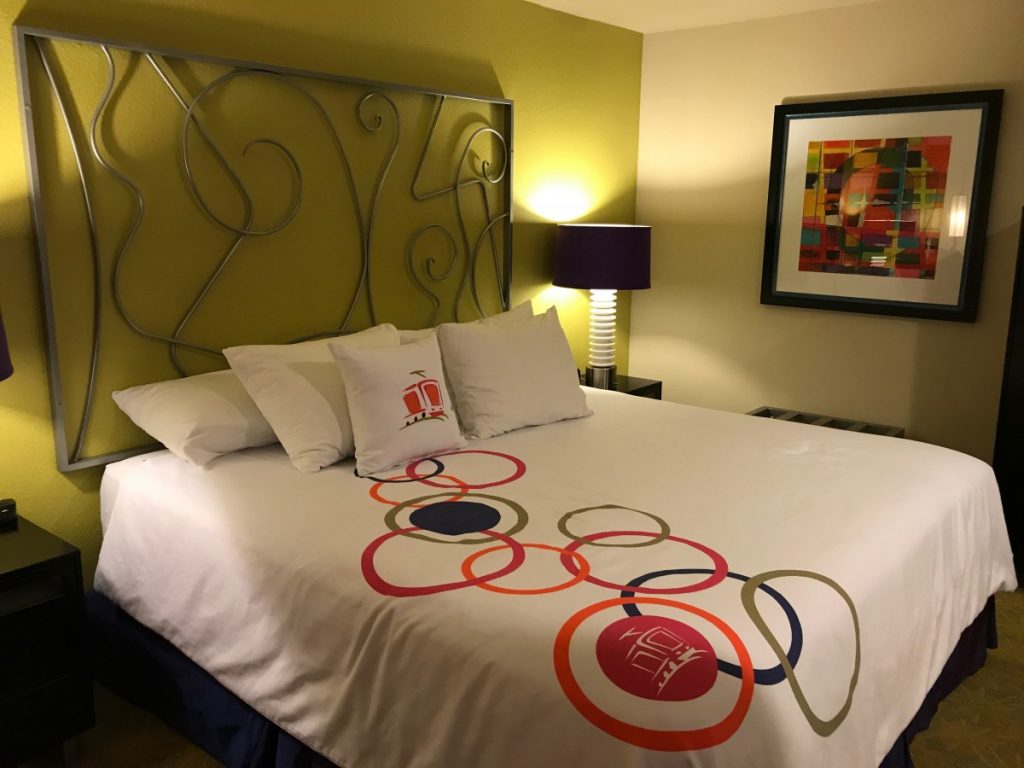 7 things to do in Portland, Oregon: sleep at the Northrup Inn 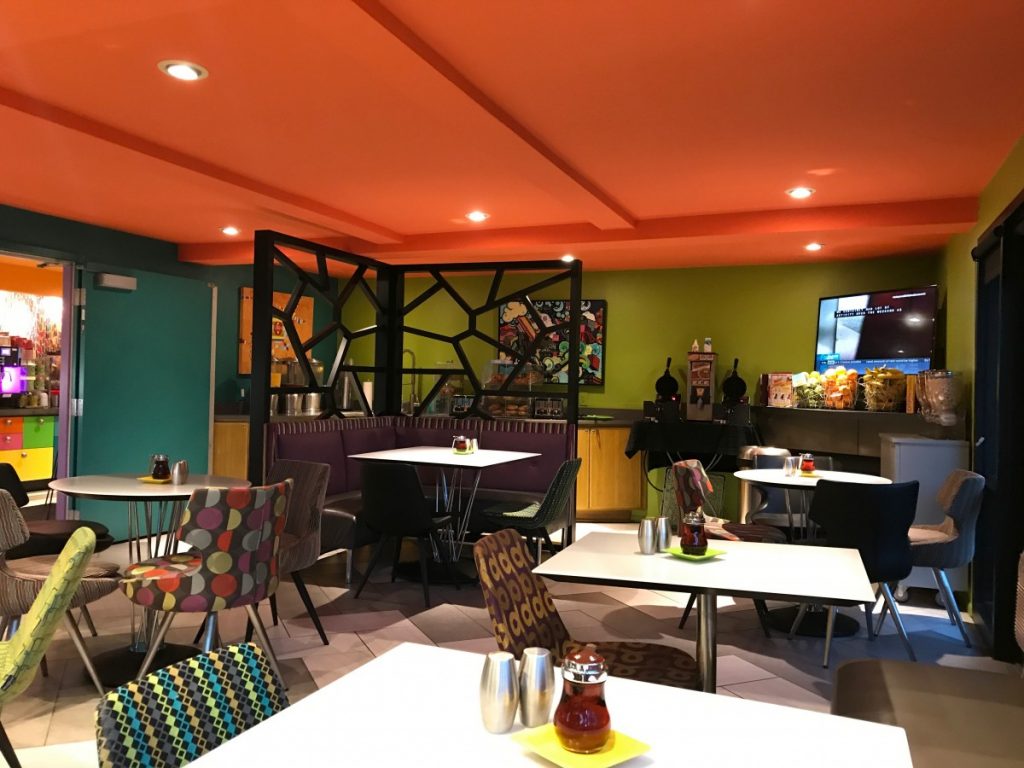 7 things to do in Portland, Oregon: sleep at the Northrup Inn

Wide and clean rooms with kitchen combining with furniture, abundant breakfast. Wi-Fi, parking, free ticket to take advantage daily of the Streetcar and evenings organized for every day of the week with meetings, events, film clubs, explorative walks and many other things.

Everything included in the fixed fair of the booking. 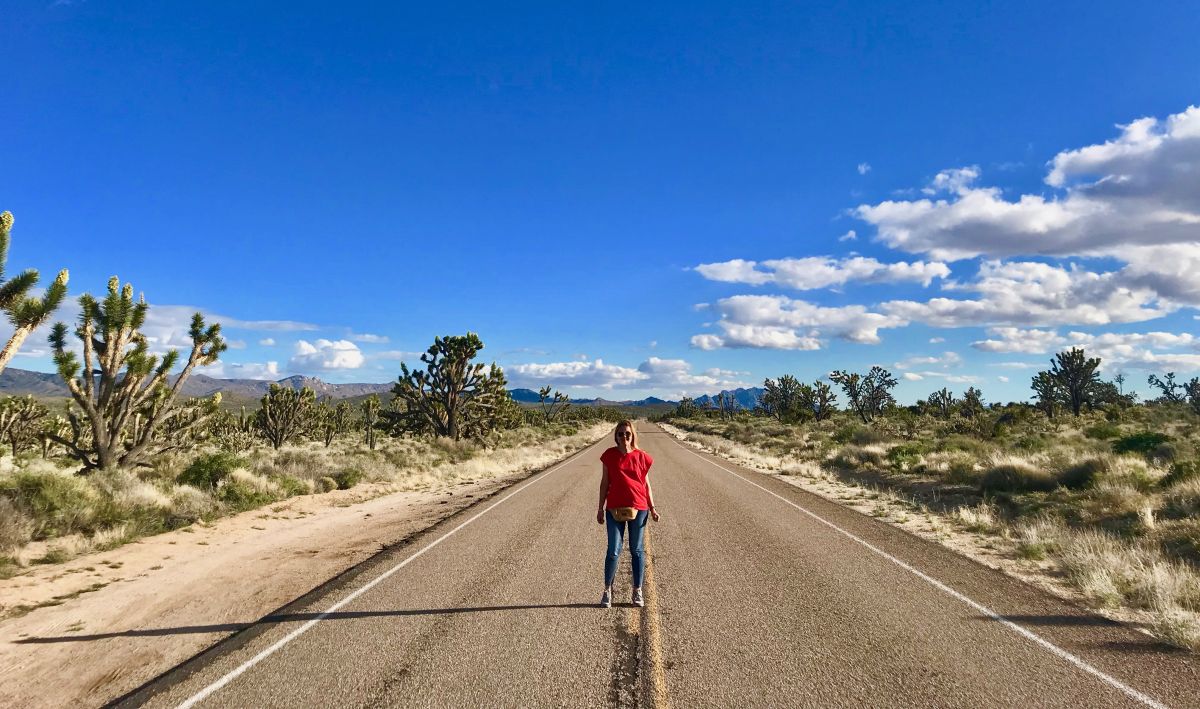 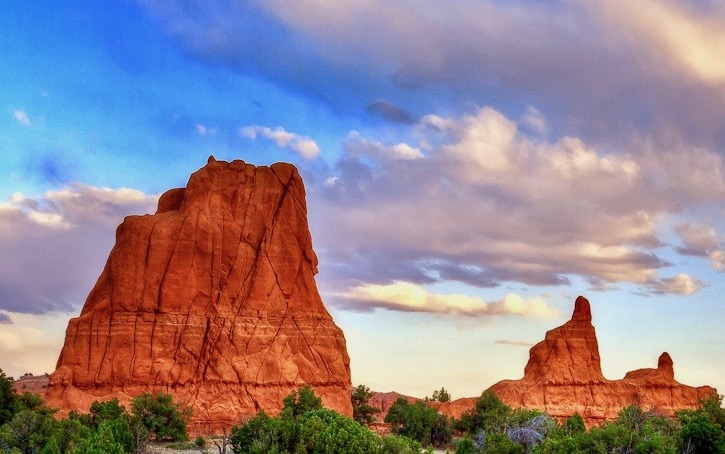 Utah what to see: visit the Kodachrome Basin State Park 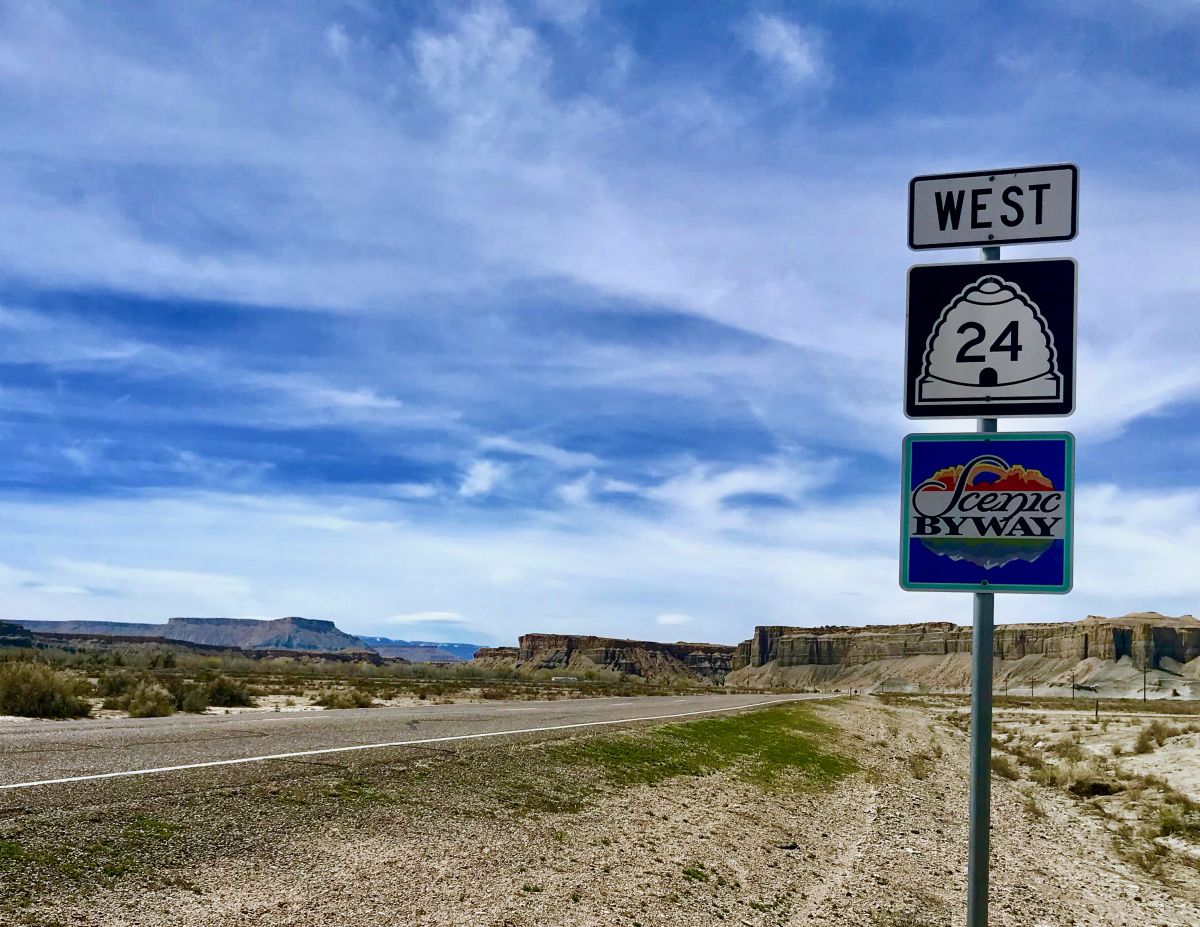