What to see in Salem, Massachusetts: visit The House of the 7 Gables

New England where to sleep: the best 10 Country Inns, B&B and historic Lighthouses where to stay

The best of New England: the itinerary discovering the most beautiful and suggestive Lighthouses, from Connecticut as far as Rhode Island, from Massachusetts as far as Maine.

An exciting journey along the coastline to discover the most fascinating ones, and find oneself – as if by magic – as the main characters of one of the masterworks of the American literature, of the many cult movies set in this wonderful land or inside one of the most famous paintings by Edward Hopper.

The best of New England: the Lighthouses of the Northeast USA, history and curious issues

When we think about the best of New England and all that this ancient and wonderful land has to give visitors, unavoidably some among its most undisputed symbols come to our mind.

I mean the iconic Covered Bridges, the colors of the warm and captivating Foliage, the old villages founded by the Pilgrim Fathers, the ancient historic inns and the Country Inns. Then the dwellings-museum of the most famous and loved writers, the delicious lobsters, the maple syrup and those fascinating stone and bricks buildings that literally act as postcard for this one-of-a-kind land.

Built from the late ‘700 until the first half of the ‘900 to provide sailing ships, whalers and fishing boats a safe road towards the insidious inlets of the ports on the Atlantic coast, over time they have become real icons thanks to the novels set in New England, the cult movies filmed here and the paintings of famous artists (impossible not to think of the paintings by Edward Hopper).

Many of this Lighthouses are still working. Some – even if they keep lighting the road along the coast – have been turned into museums, other ones into originals B&B where to stay overnight.

Today, a journey discovering the best of New England cannot help but include the search and the tour of its most representative Lighthouses.

The best of New England: the Lighthouses not to miss, from Connecticut as far as Maine. The itinerary

“I can think of no other edifice constructed by man as altruistic as a lighthouse.

They were built only to serve”

In the collective imaginary the most fascinating Lighthouses of New England are located on those long, amazing and indented coastline on the Atlantic Ocean that form Cape Cod in Massachusetts arrives as far as Mount Desert in Maine.

In part it is true. Right here there are also some Lighthouses among the most famous ones, celebrated and told by artists, moviemakers and painters.

But what many people don’t know is that in the two states not as famous as the other ones in New England – Connecticut and Rhode Island – there is a fair amount of historic Lighthouses, today mostly museums or B&B in some cases. Some of them are really worthy for their architecture, geographical location and history.

Find down here – in order of distance, from Connecticut as far as Maine, passing by Rhode Island and Massachusetts – a list of those ones worthy of a tour or at least a “photographic” stop, according to my personal experience.

I have selected 15 Lighthouses. You reckon that in the whole region of the Northeast, nowadays there are over 150 Lighthouses.

For any further info about all the Lighthouses in New England, you can look the new England Lighthouses-a Virtual Guide website up.

The Penfield Reef Lighthouse is located in Penfield Reef on the southern side of the Black Rock Harbor entrance, on the Long Island Sound, offshore the Fairfield Coast, in Connecticut.

It was built in 1874 at the end of the coral reef, about 2km far from the coast. It is listed in the US National Register of Historic Places.

Nowadays it cannot be reached by public, since it is run and inhabited by the actual keeper and his family. My tip is to plan a boat trip from Fairfield to admire it and take photographs from the sea.

The best of New England: The Stonington Lighthouse, Connecticut

It was built in 1841 and today it is one of the best kept stone lighthouses dating back to that period.

It stopped working in 1889 and it was turned into an interesting local history museum, The Stonington Lighthouse Museum.

The Lighthouse can be reached on foot from downtown Stonington. The museum is opened from May until September.

Prudence Island can be easily reached by ferry from Bristol: from the pier you have to walk for about 2km to reach the Lighthouse. Since it is still working, people are not allowed inside.

By far one among the most wonderful lighthouses in New England, above all for its scenic location in Newport Bay.

Today it is a sort of museum. Day boat trips are scheduled and the museum gives the chance to stay overnight at the keeper’s house or at the adjoining accommodations to whom wants it. Considering the peculiarity of this place, it is advisable to book well in advanced both the tour and the overnight stay. Find here further info.

Great Point Lighthouse – known by locals as Nantucket Light – is located in the northernmost part of the Nantucket Island, in Nantucket Sound, in Massachusetts.

It was built in 1784, but the original wooden tower was destroyed by a fire in 1816. The following year a new tower was built – a stone tower this time – which remained there until it was completely broken down by a tempest in March 1984. Two years later, it was faithfully reconstructed and put working again.

The Lighthouse is located in a very particular and suggestive position, on a thin strip of sand where the Atlantic Ocean and Nantucket Sound meet.

Nantucket Island can be easily reached by ferry from Hyannis, from the near Martha’s Vineyard and from New Bedford. On the island there are other two worthy lighthouses: the Sankaty Head Light and the Brant Point Lighthouse.

Cape Cod is a spectacular strip of land insinuating itself hook shaped into the Atlantic Ocean, famous worldwide for its natural sights, for the first berth of Mayflower – the ship that in 1620 took the first Pilgrim Fathers from England to the “new world” – for the picturesque fishermen villages, its boundless beaches, to be the Summer “manor” of the Kennedy clan since the first decades of the 1900s and for its amazing Lighthouses.

On its peninsula there are 14 lighthouses. You can find them all – listed and told in details – on the local Cape Cod Lighthouses website.

I recommend my favorite ones: the Chatam Lighthouse and the Highland Lighthouse.

The first one was built in Chatam, in the so-called “elbow” of Cape Cod in 1808 – originally its name was Twin Light.

The second one – the Highland Lighthouse – is located in North Turo and it is the most ancient Lighthouse in Cape Cod. Originally it was built in 1797 and successively it was rebuilt more times. It was quoted by Henry David Thoreau in 1865 in his “Cape Cod” – “This lighthouse, known to mariners as the Cape Cod or Highland Light, is one of our “primary seacoast lights” and is usually the first seen by those approaching the entrance of Massachusetts Bay from Europe.” – and painted by Edward Hopper in his “Highland Light, North Truro” in 1930.

The Nubble Lighthouse, built in 1874 and working since 1879, is considered one among the most photogenic of New England. It is located on a cliff in front of the Cape Neddick promontory, near York.

Both the lighthouse and the neighboring land can be reached by the public.

The Portland Head Lighthouse is located in Cape Elisabeth, near Portland and it is in all respects the true postcard of New England. It is the most famous lighthouse, the most reproduced and also the most ancient one in Maine.

It was wanted by George Washington personally in 1787 and ended in 1791 when Maine was still a part of Massachusetts to sight potential hostile ships. Then it had a main role during the American Civil War. Today it is a part of the Fort Williams Park and it can be visited. Inside, in the old keeper’s house, there’s a little museum dedicated to the history of the place.

The Pemaquid Point Lighthouse is another beautiful historic lighthouse in Maine. It is located near Bristol and it was commissioned by president John Quincy Adams in 1827.

At the second floor it hosts a museum dedicated to the epic of the fishermen of Maine, at the third floor there’s an apartment (4 people max) which can be rented during Summer. Find here further info.

Admission to the park – the tour of the tower included: $3 each. 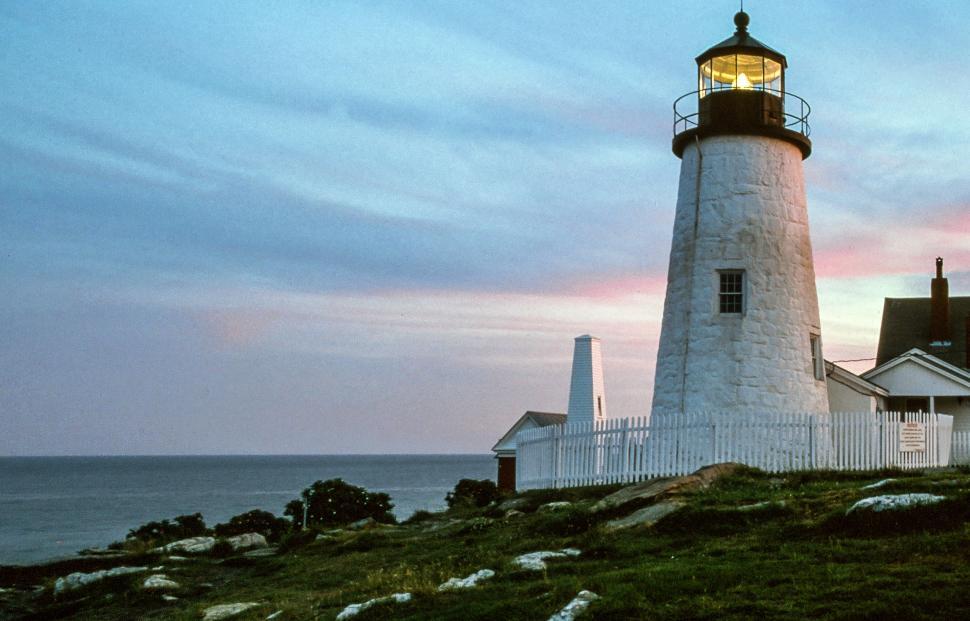 The Marshall Point Lighthouse was built in 1857 and it is located on a rocky promontory at the end of the St. George peninsula, near the Port Clyde fishermen villages. Today it is a museum and includes a recreation area for families.

It became famous in 1994 as the “Forrest Gump Lighthouse”, because it was used as location of one among the cult scenes of the movie “Forrest Gump”.

The Owls Heads Lighthouse is located at the entrance of the Rockland Harbor in Penobscot Bay, near Owls Head.

It was built in 1825. Today it is still working and it is run by the American Lighthouse Foundation.

Admission is allowed only in the park and the area around the Lighthouse.

The Bass Harbor Light is located near Bass Harbor, on the southern tip of Mount Desert Island, in the Acadia National Park.

It was built in 1855 and it is still working, run by the actual keeper living there together with his family.

Admission to the tower is not allowed, but it is possible to admire it from the outside thanks to a short scenic promenade leading to the suggestive granite cliff below.

Rarely guided tours of the building are scheduled. Here for further info.

The best of New England: tips and readings recommended to get prepared for the journey

Find here a detailed itinerary for a journey to New England with all the stages, the tips and the deepener links.