What to do in Chicago: 10 locations, things and paths not to miss to discover, enjoy and “taste” the best of the “Windy City” 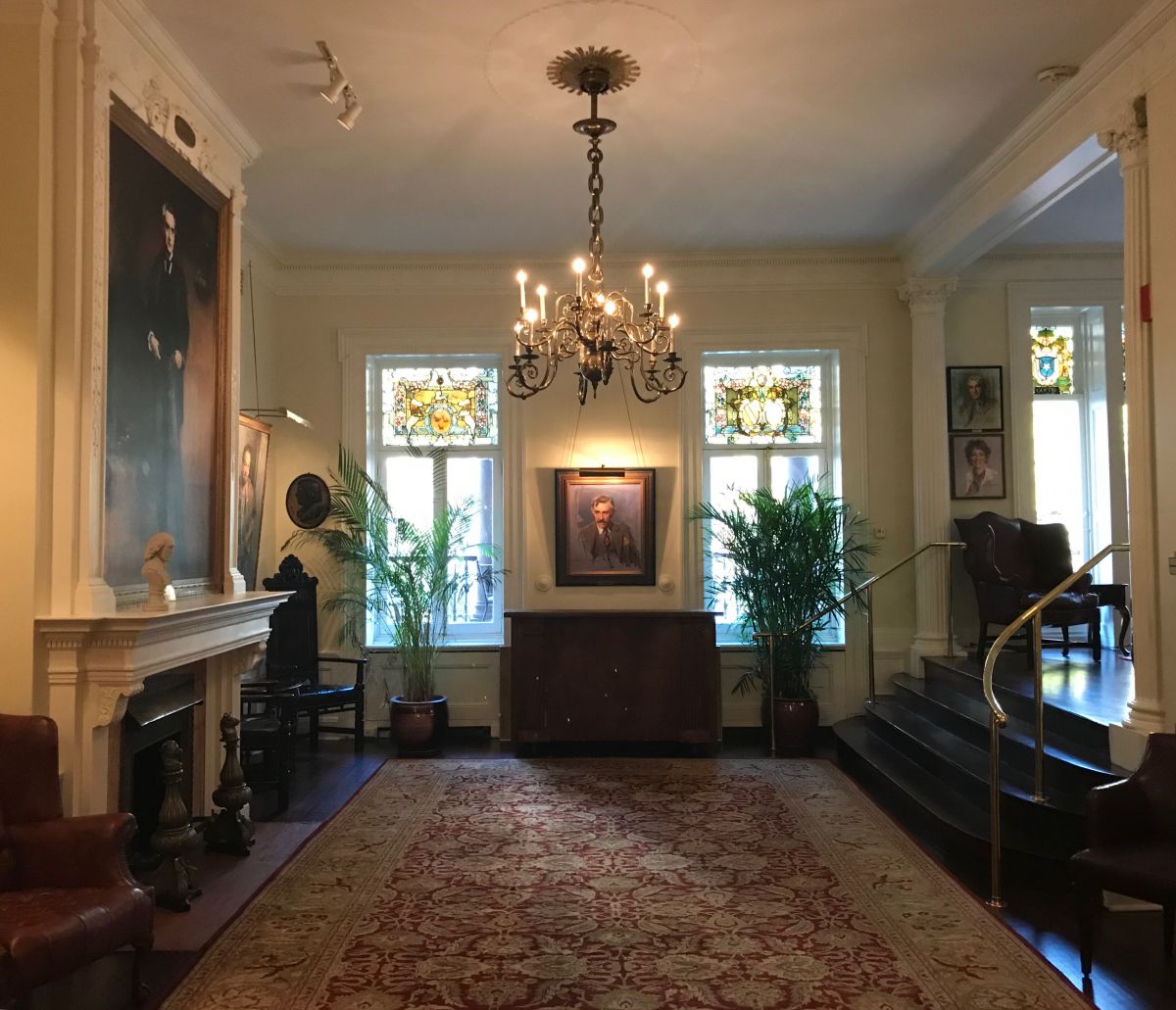 It’s one of my special places in New York.

I read about it for the first time on The New Yorker pages, I deepened with some researches, I sent some emails and at the end I had the chance to enter it for a private guided tour a couple of months ago.

It’s the symbol of a New York that still survives despite the passing of time, that one tied to its century of lights and shadow – 1800 – and of a Manhattan made of brownstone dwellings and townhouses, tail-coats and silk dresses, laces and crinolines, gaslights, cobblestoned streets and carriages with horses. 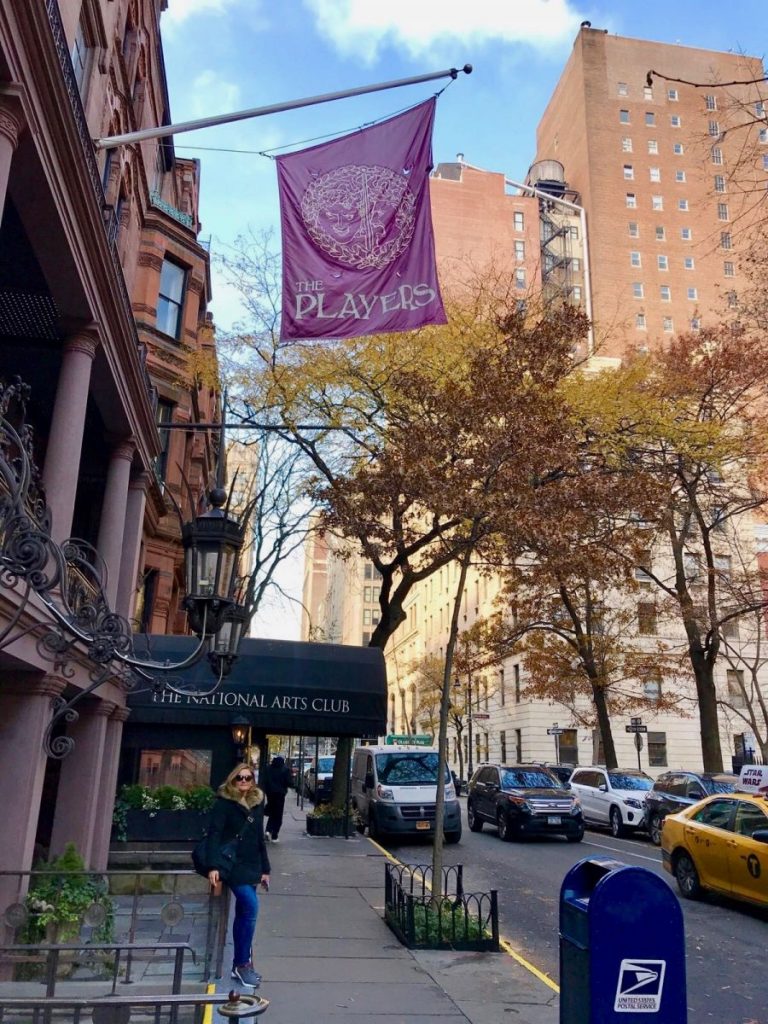 Special places in New York: The Players in Gramercy Park

Edwin Booth’s New York – one among the greatest USA artists between the 1800s and the 1900s – and The Players’, the most ancient club (and museum) of the USA theater, with a view and private access of Gramercy Park, the most exclusive park of the city. 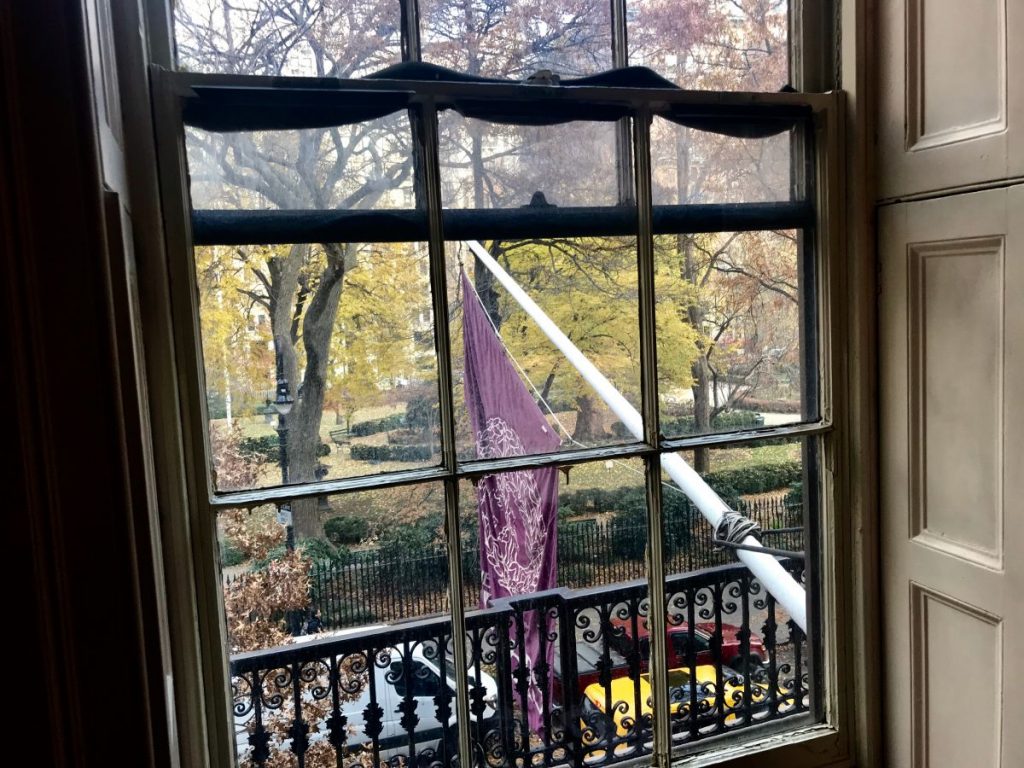 Special places in New York: the Players, history and anecdotes

“The Players is a private social club founded in 1888 when Edwin Booth, the greatest American actor of his time (…)

to transform it into a certain club for the promotion of the social intercourse between the representative members of the dramatic profession and the kindred profession of literature, painting, sculpture and music, and the patrons of the arts.

In 1888 Edwin Booth – very famous theater actor and John Booth’s brother, President Abraham Lincoln assassin – decided to found an exclusive club for artists, literary men and members of the New Yorker high society, with the aim to improve the conditions and the “fame” of the theater actors, until then considered wanderers who would not wish to be seen with and untrustworthy.

So he purchased a Greek revival-style building at 16, South Gramercy Park, he furnished it with taste filling it with artworks, books and theater objects accumulated over his career and he opened it on December, 31st 1888 and named it “The Players”. 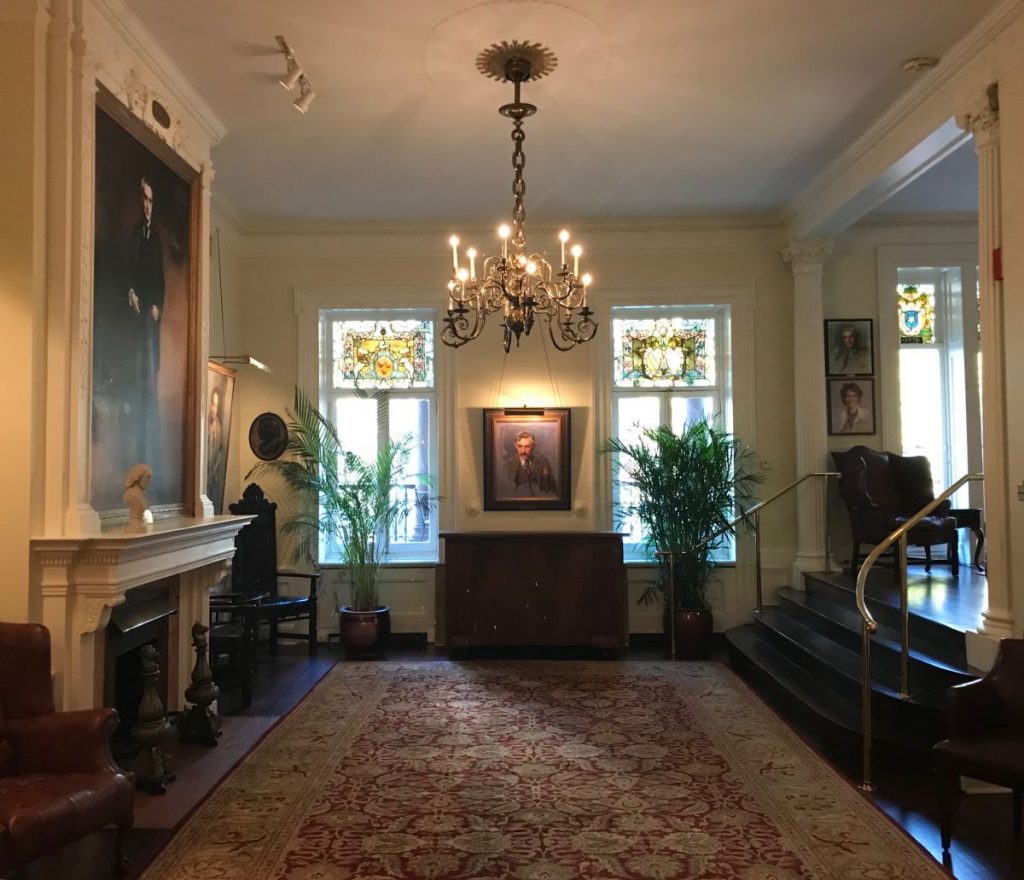 Over time the club became a downright institution about events related to the artistic activity of its members, turning progressively into the most important museum (with adjoining bookstore) of the United States theater.

For long time The Players admitted among exclusively male members.

In 1911 a petition to allow the legendary French actress Sarah Bernhardt the access was signed by all members – once entered it seems she was stuck for long time into the old service elevator, there are several anecdotes about this – but only in 1989 the statute was changed and the first two women were admitted. 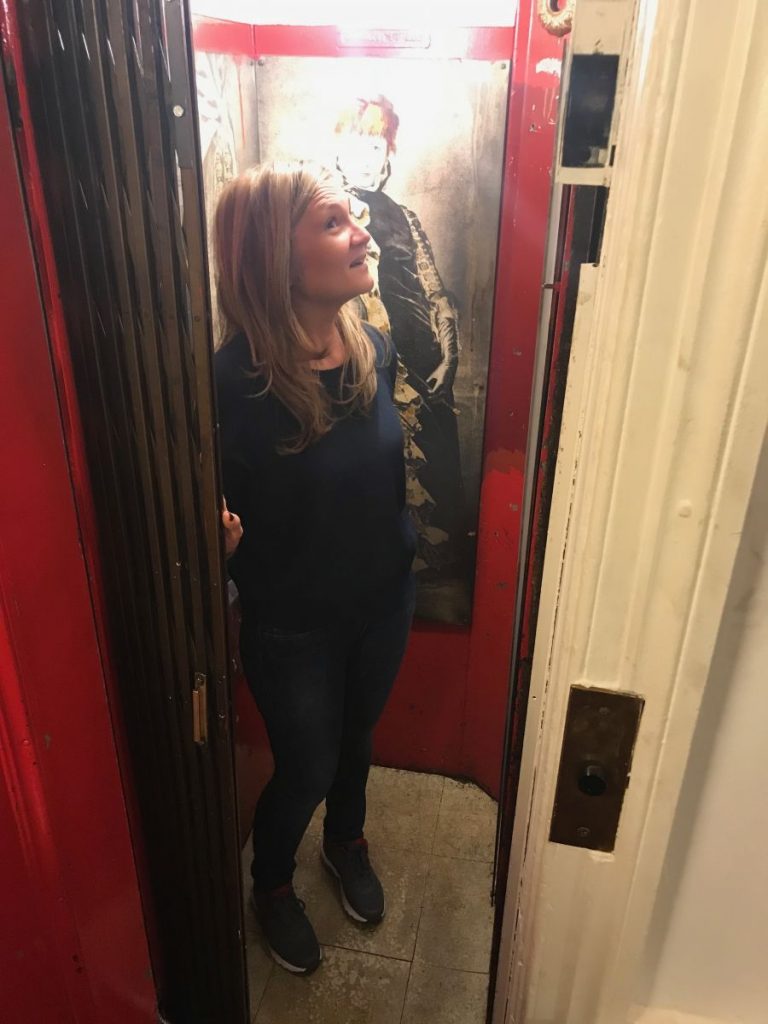 Special places in New York: The Players, the elevator where Sarah Bernhardt was stuck

Today The Players is still that special place wanted by Edwin Booth (who lived here the last years of his life, he died on June 7th, 1893 in his private apartment at the last floor) where art, culture, theater and movie lovers meet for the pure pleasure of mingle, share emotions and special moments, enjoying among other things – according to the statute – the possession of the key and the privileged access to one of the most suggestive and charming private parks in New York: Gramercy Park. 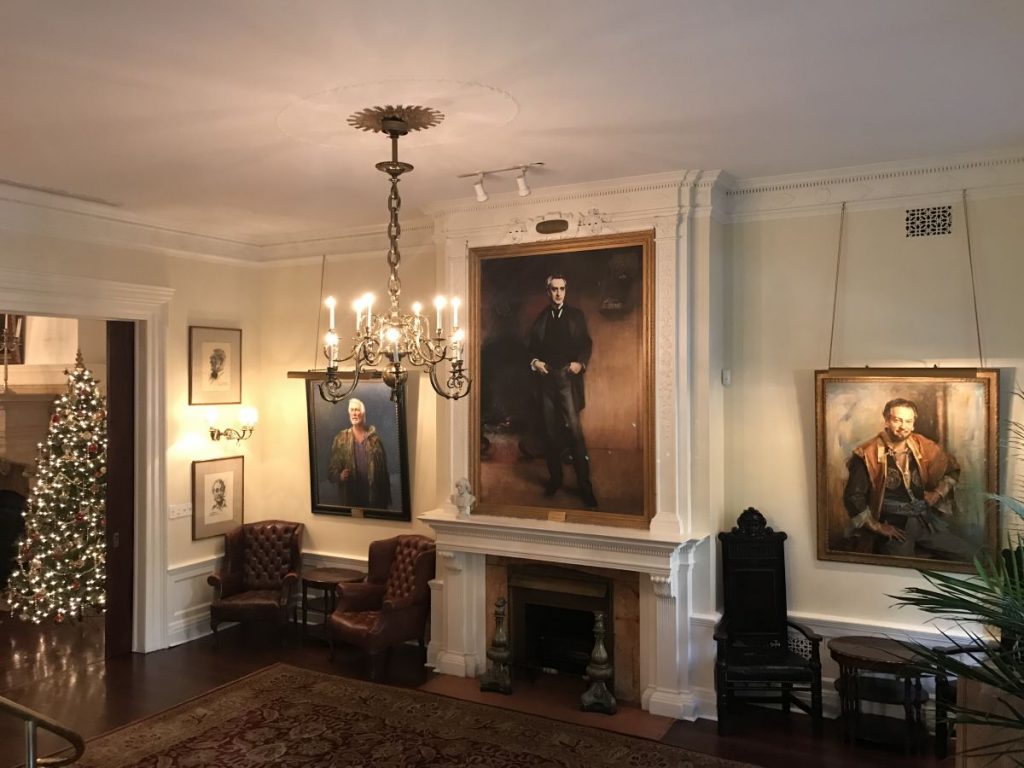 Special places in New York: The Players, the Great Hall

Today visiting the Players is like setting out on a journey back in time to be swallowed up by the New York of the middle 1800s, into the magic world of Edwin Booth’s theater and of all members, artists, writers, even Hollywoodian actors following one another over time as members and affiliates of the club.

The tour develops through the 3 floors of the building. 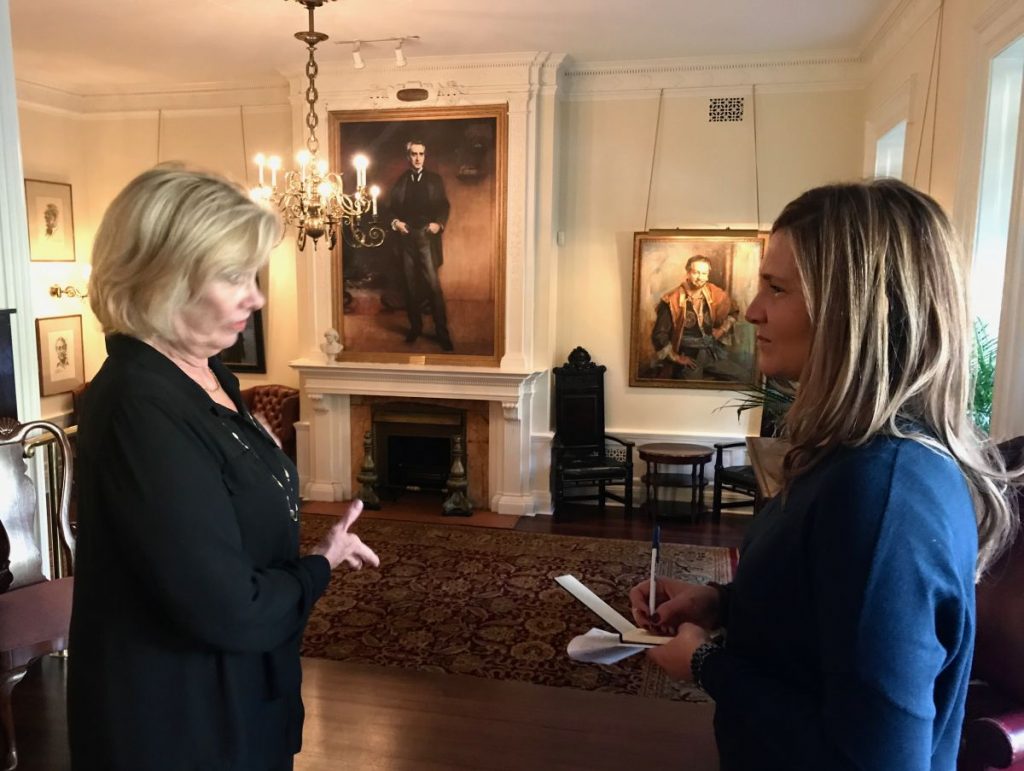 Special places in New York: The Players, the guided tour

Starting from The Grill where it is possible to admire the pool table used by Mark Twain, the petition (framed) for the admission of Sarah Bernhardt and a series of paintings about theater sets, caricatures and sketches (among them one by Norman Rockwell) as far as The Great Hall, at the first floor dominated by a huge 20tons fireplace with The Players symbol engraved on, the two Comedy and Tragedy masks, besides a big portrait of Edwin Booth, first President of the Club, playing Richelieu. 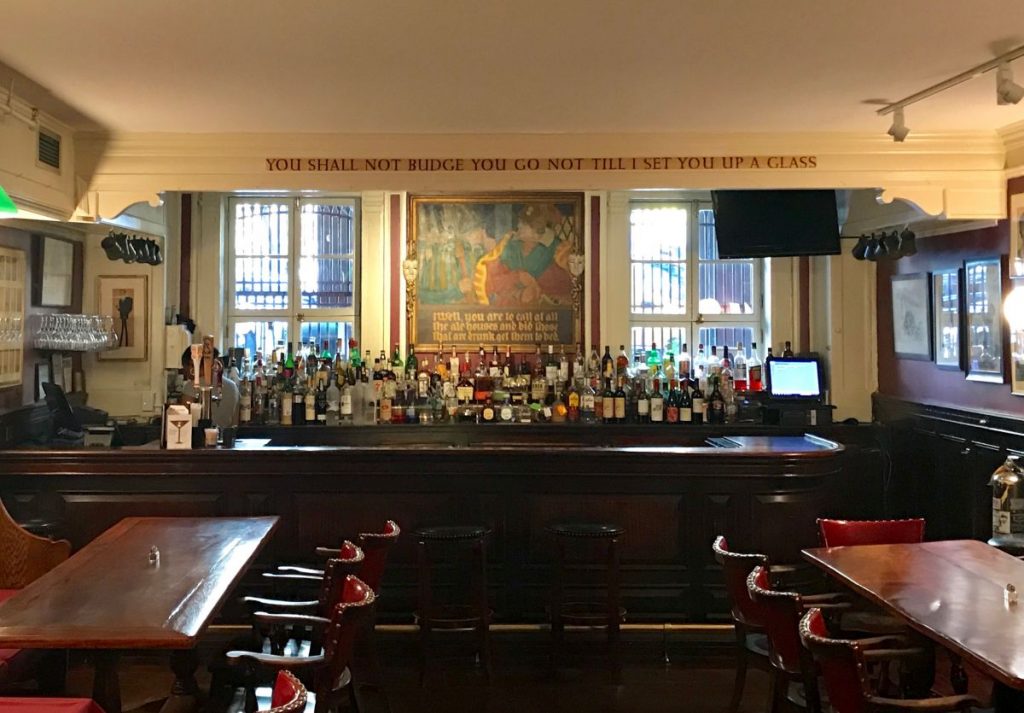 Special places in New York: visit The Players, The Grill 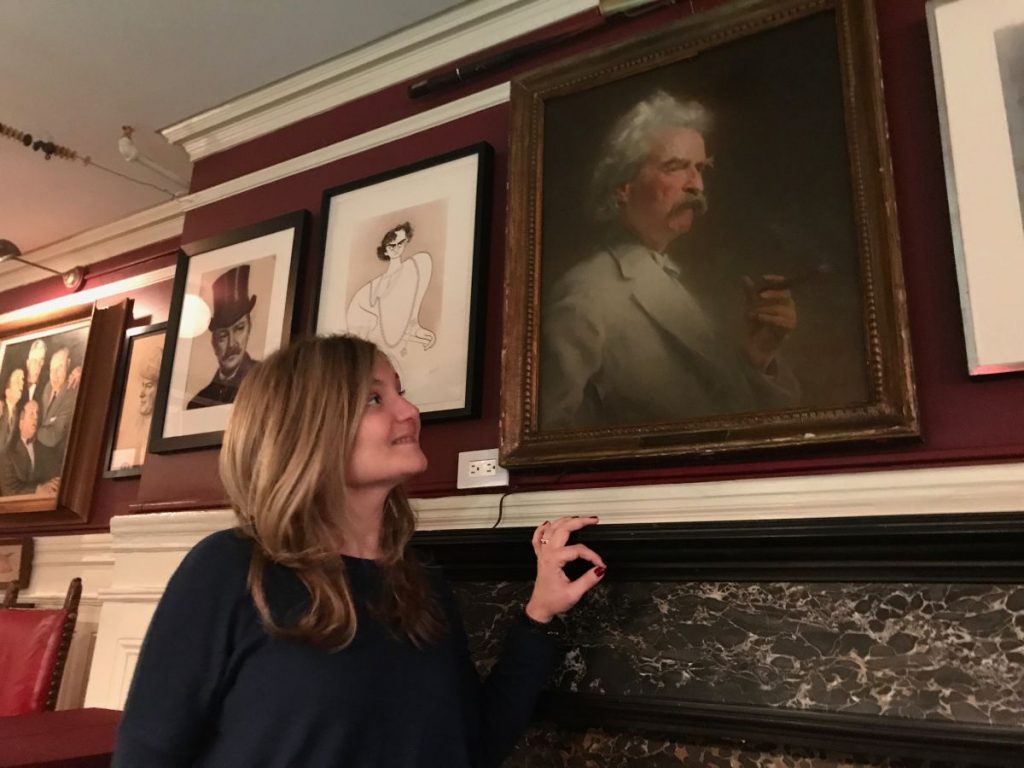 Special places in New York: visit The Players, the Grill, one of Mark Twain’s portraits 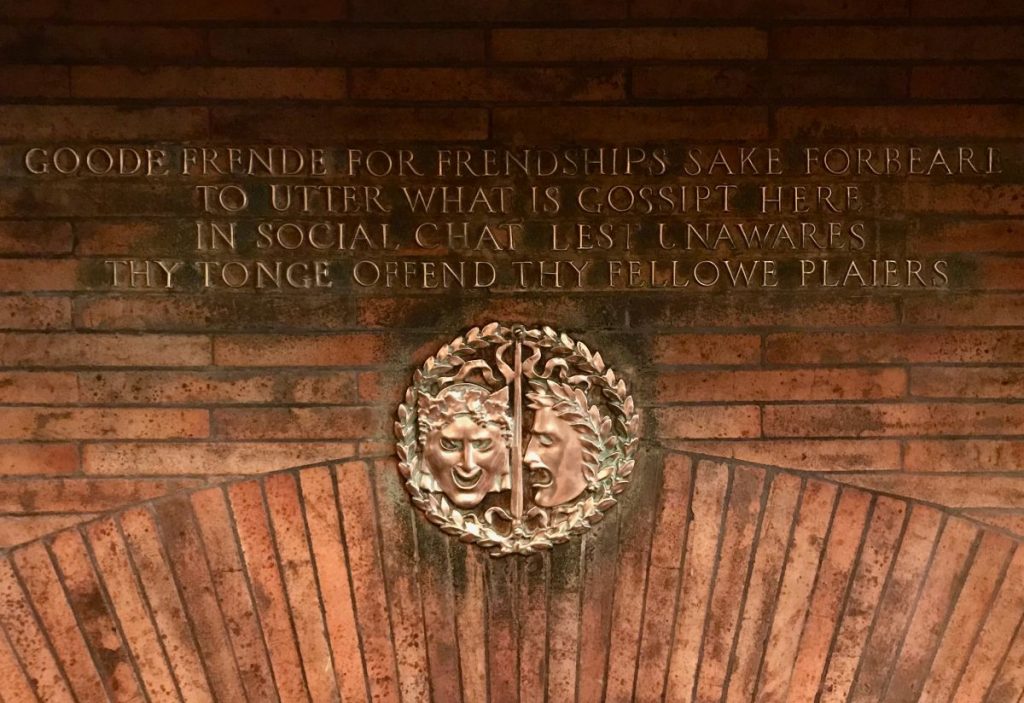 The symbol of The Players, the two masks Comedy and Tragedy 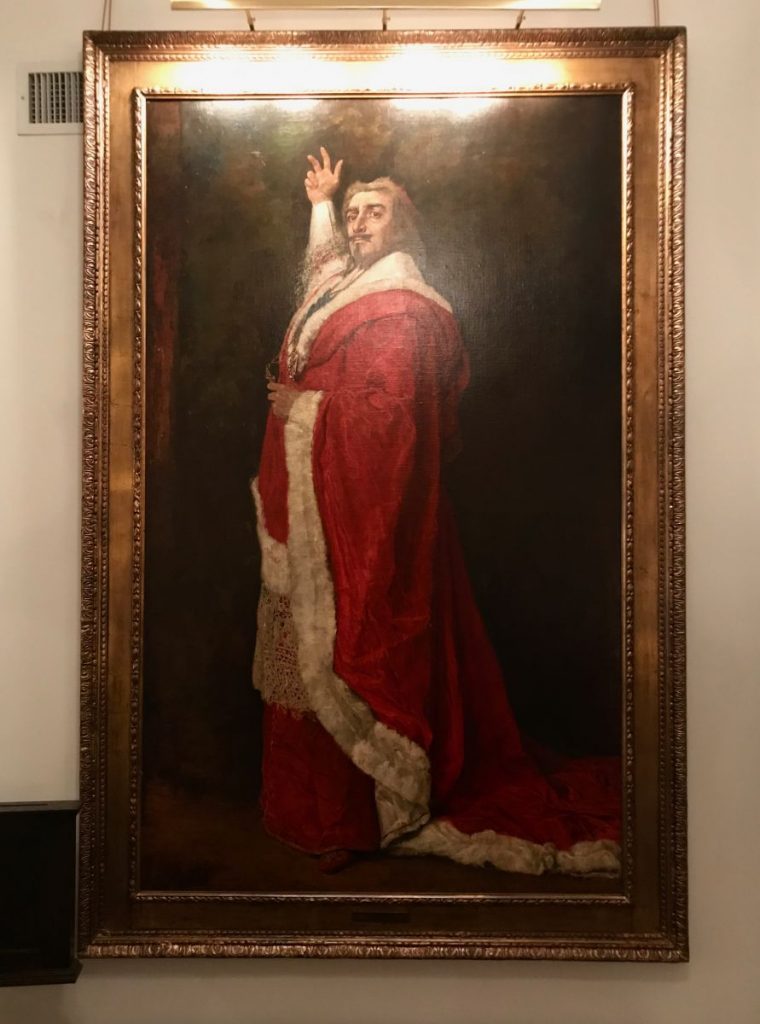 Along the stairs taking upstairs you can admire the portraits of the members and of “friends” who attended the club over time: Ernest Hemingway, Lauren Bacall, Humphrey Bogart, Tommy Lee Jones, as far as arriving to contemporary actors and literary men.

The library at the second floor – today considered one among the best theater archives of its kind – keeps photographs, books, over 50.000 shows playbills and some autographed writings by Edwin Booth, included the letter he wrote on June, 20th 1865 to apologize to the American people for president Abraham Lincoln’s assassination occurred at the hands of his thoughtless brother. 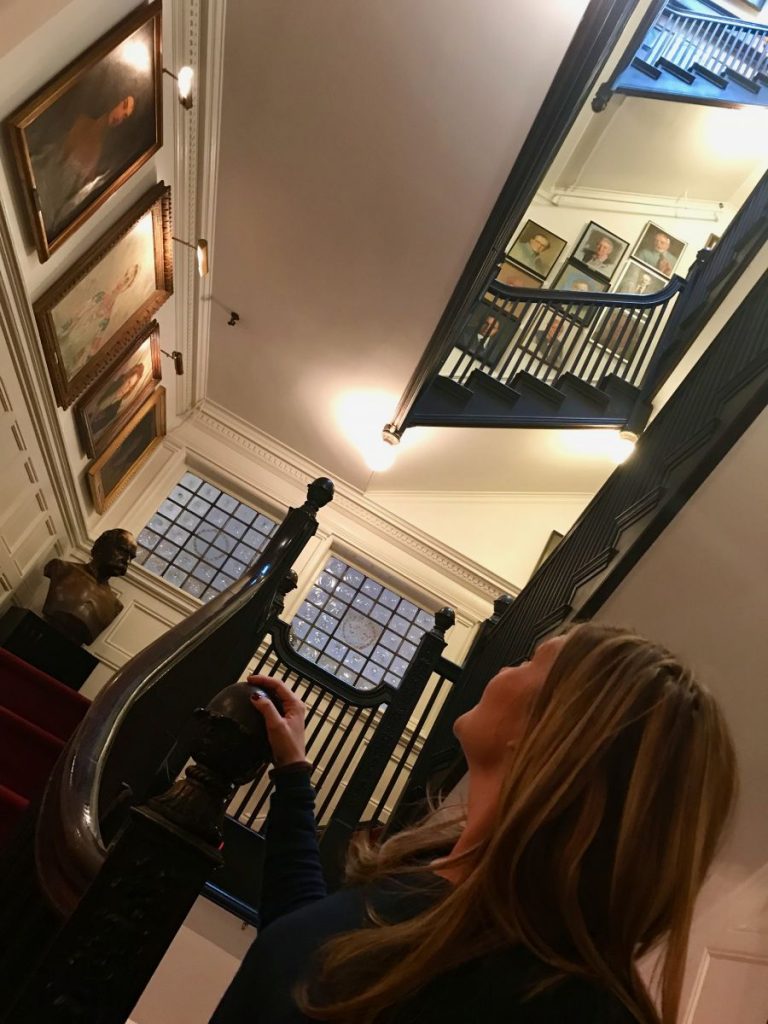 Special places in New York: The Players, the access upstairs 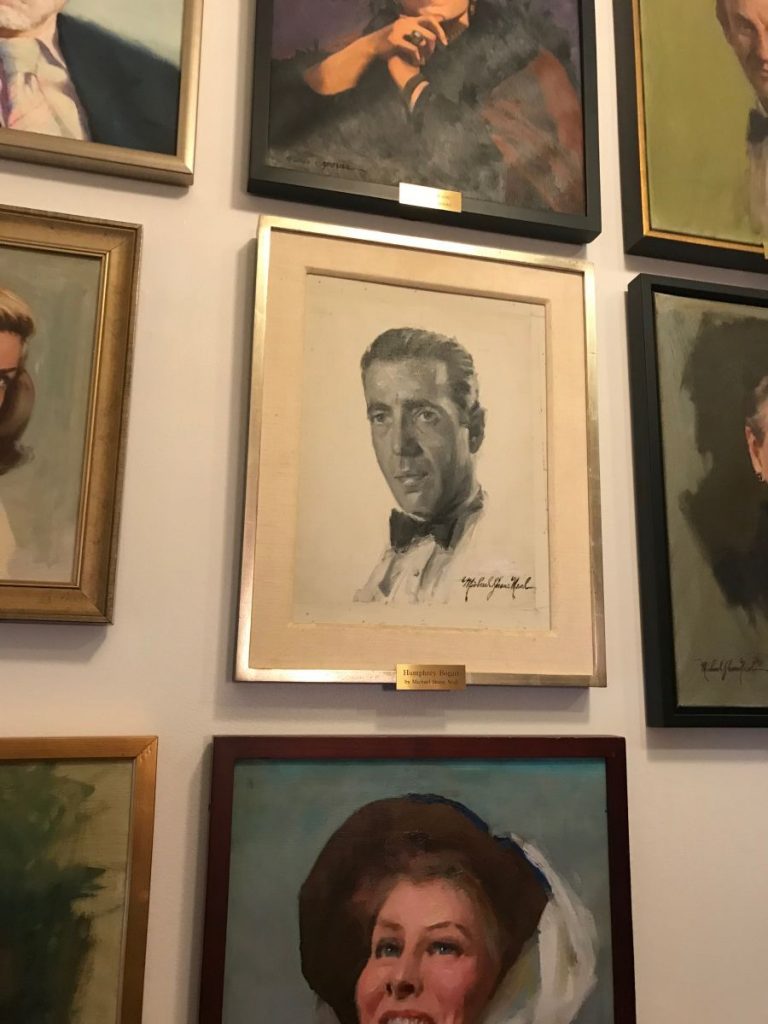 Special places in New York: The Players, the portraits of the “famous” members 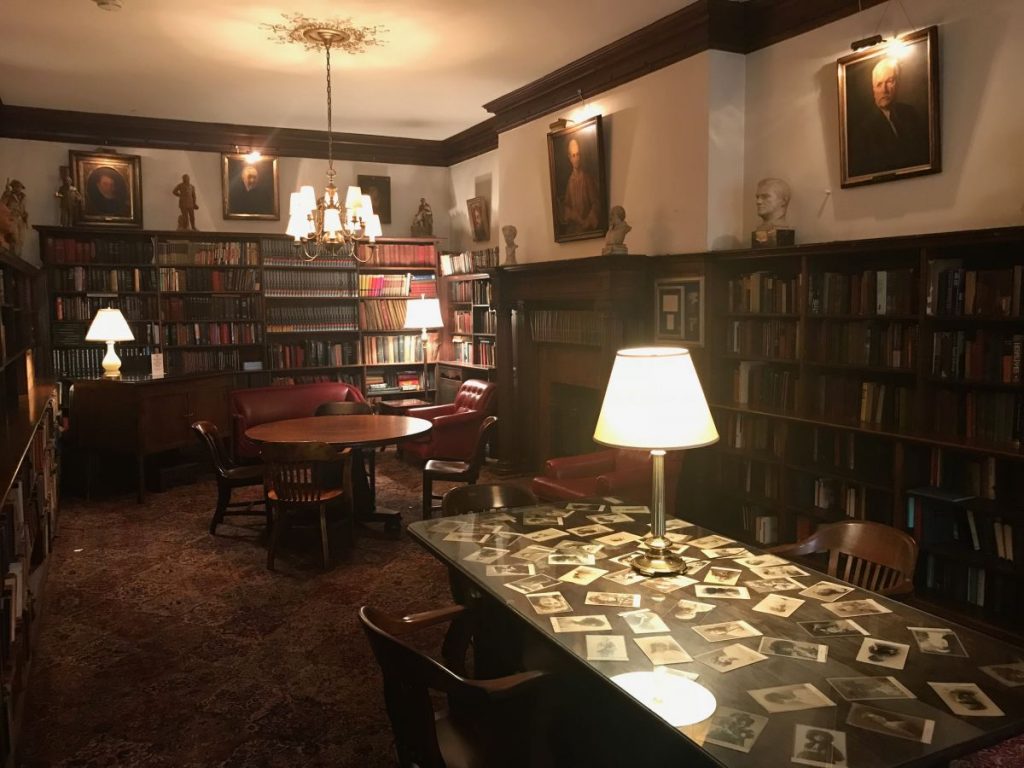 Special places in New York: The Players, the library

The final part of the tour is reserved to Edwin Booth’s apartment, two rooms at the last floor, which the artist defined his “nest among the top of the trees of Gramercy Park.”

A sitting room and a bedroom stopped on June 7th, 1893, when Booth died. 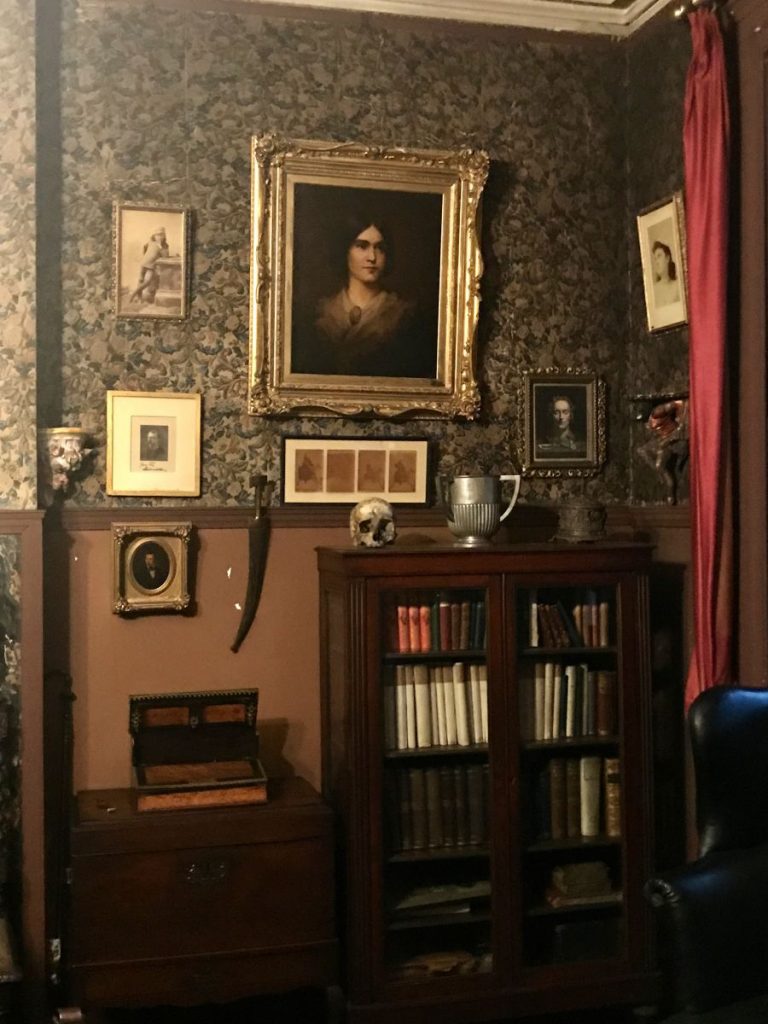 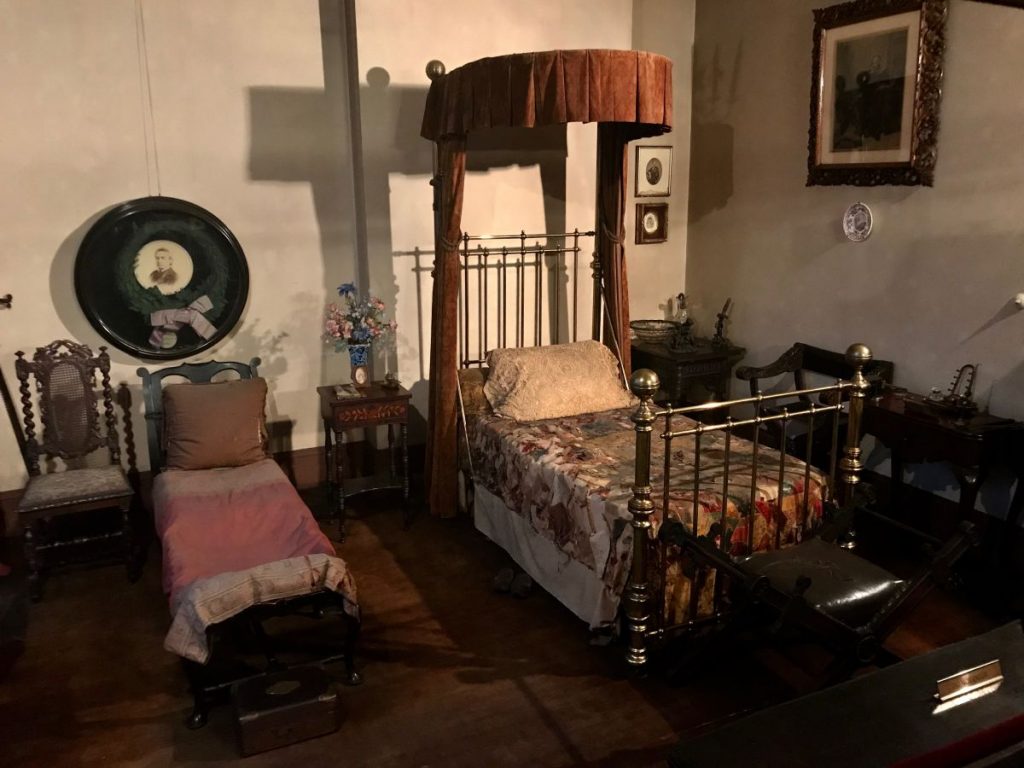 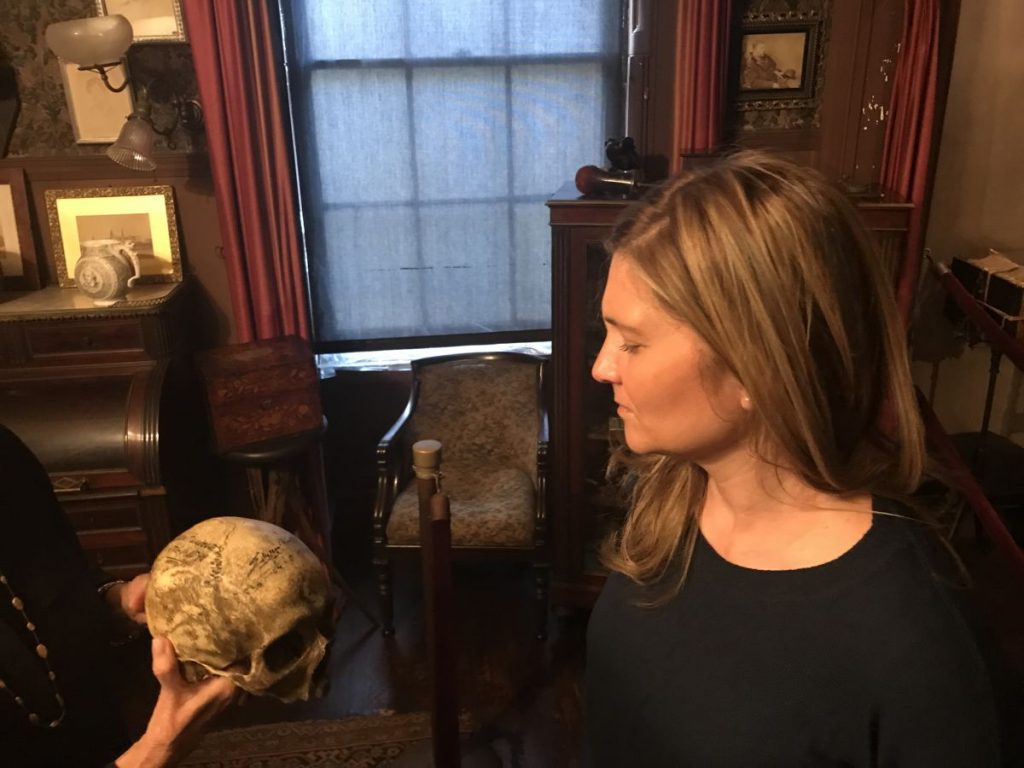 The rooms are full of personal memories of the actor: the brass bed with the silk little cover wear out and faded by now, William Winter’s poems book opened at the last page read, its pipes, the cigars and its favourite skull then used in almost his “Hamlet” plays – a horse thief’ one convicted to death that short before being hanged asked that his own skull was given as a present to the actor he admired so much.

From the two windows you enjoy one among the most beautiful views of Gramercy Park.

Particularly of the statue at the center of the park, that one honoring and commemorating the greatest American theater actor Edwin Booth. 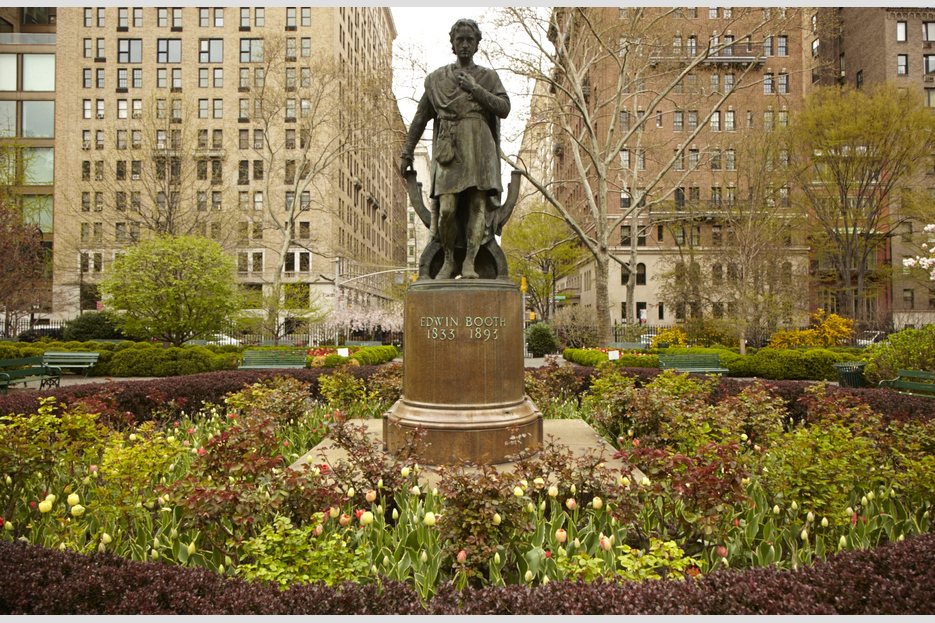 Special places in New York: The Players, practical info and tips for the tour

The Players is located at 16, Gramercy Park South, in a Greek-revival redbrick, stone and wrought iron details building.

If you want to book a private tour (with a fee) – about one hour and half – you have to send an email to info@theplayersnyc.org or call the number (212) 475-6116 explaining the reasons of your interest about The Players – passion for theater, for the old NYC, its historical buildings, the desire to know more about Edwin Booth at cetera – and the exact dates of your stay in the city. 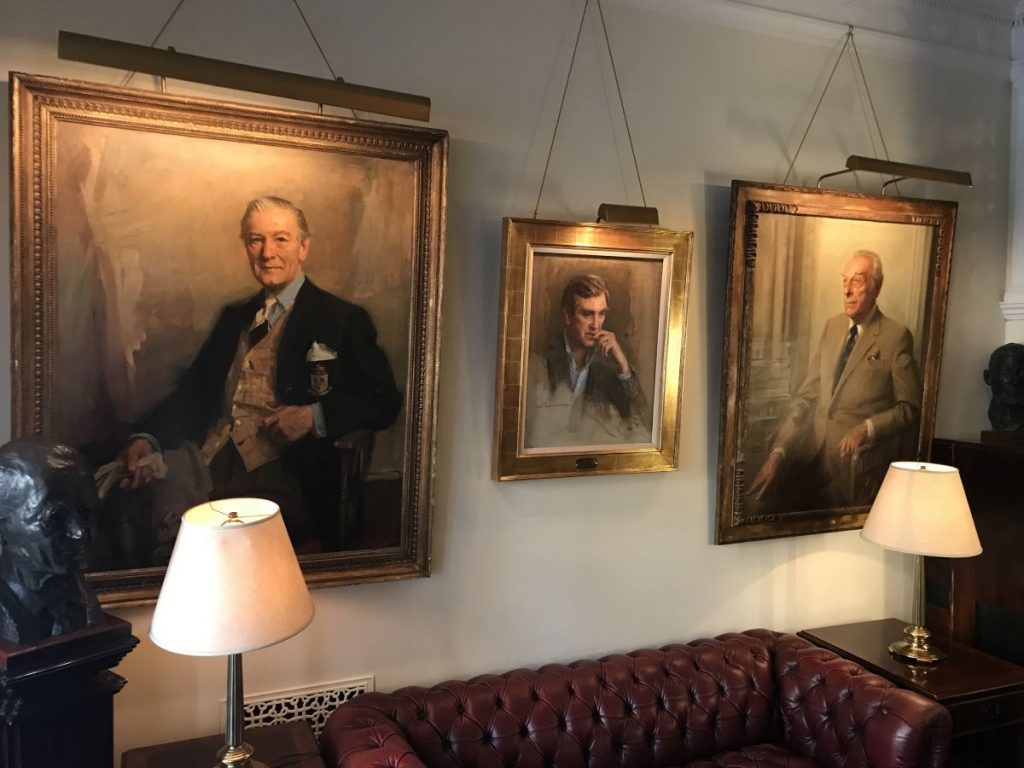 You will be sent an answer within a few days with an appointment and the name of the guide who will accompany you along the visit.

You have to go on the day and the timer scheduled to the building’s entrance, precisely at 16, Gramercy Park South, enter the threshold of the Great Hall and wait there for the arrival of your guide.

It’s possible to take photographs (no flash) and shoot short videos, however paying attention to not disturb the club’s members, usually in the library or in the sitting rooms at the second and third floor.