Things to do in Mississippi.

Try only to think about the places, the roads, the legends and the characters which have made the history and the fortune of this state making it one of the most charming and original ones in the United States in all respects.

After have told about the roads of blues, the Juke Joints, the cotton fields and the very beautiful antebellum mansions, the Mississippi River, the movies locations and the most famous novels set here, I arrive writing about Tupelo at last. 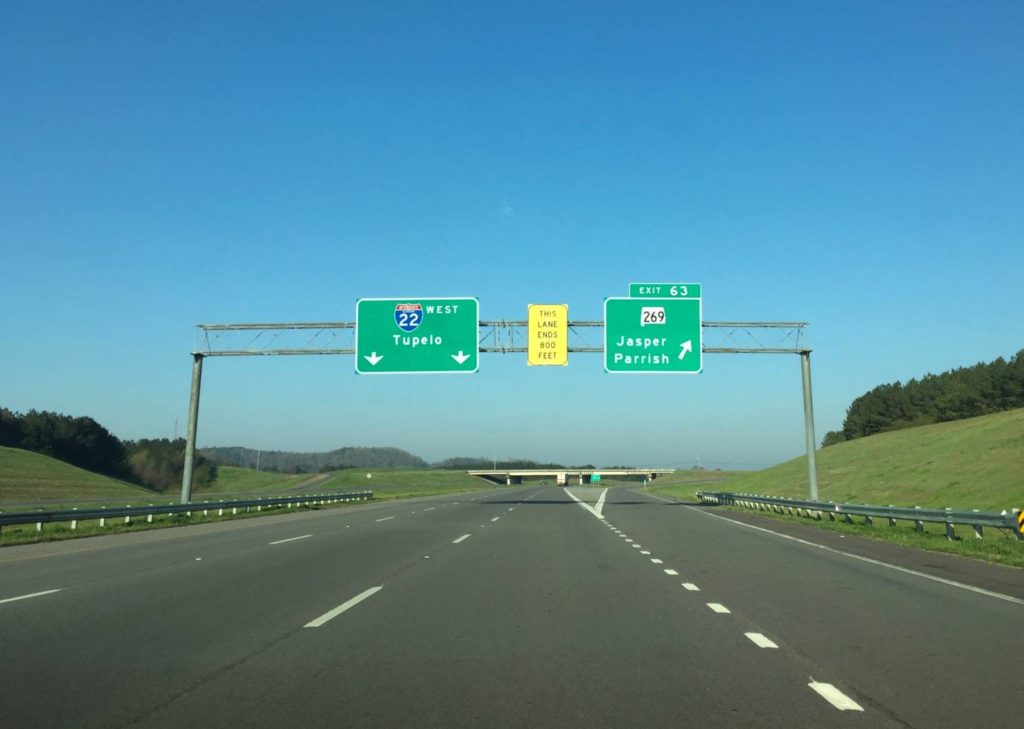 Things to do in Mississippi: towards Tupelo

Things to do in Mississippi: visit Tupelo

A little town in the north-east of Mississippi, less far from the Tennessee and Alabama borders. It is just on the I 22, the interstate that links Birmingham to Memphis in about 350 km.

Tupelo is famous in all over the world to be the birthplace of the greatest rock legend, Elvis Presley.

It’s a compulsory leg of one of the most fascinating and suggestive Scenic Highway of the South, the Natchez Trace Parkway. 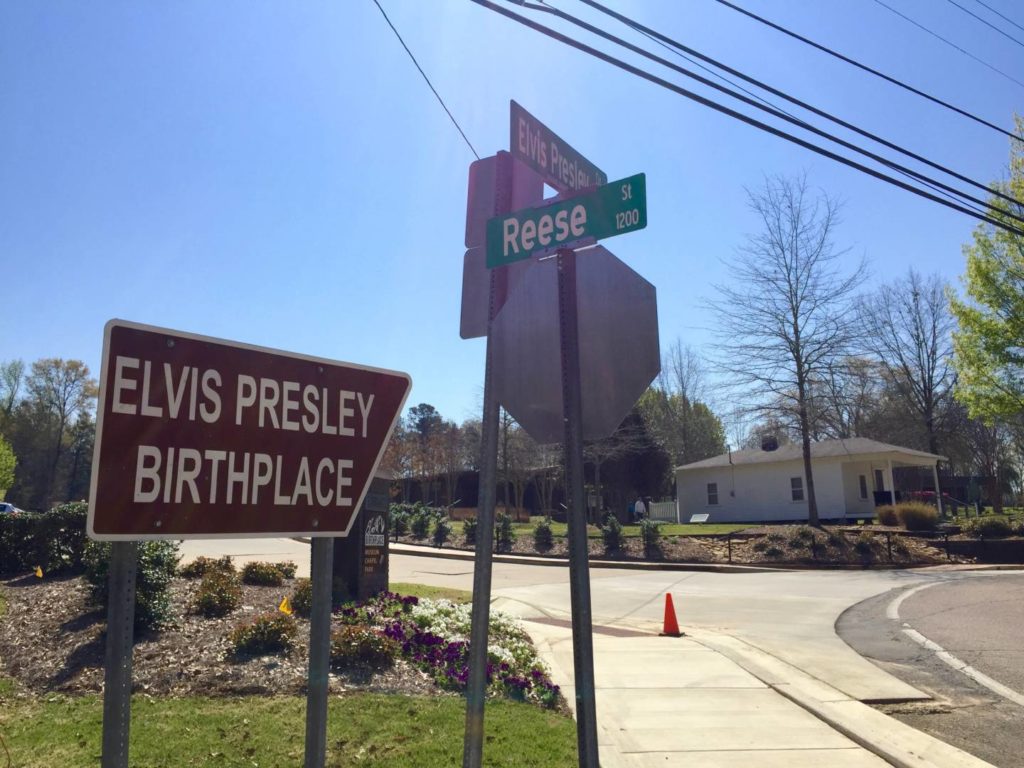 Things to do in Mississippi: Elvis Presley birthplace, Tupelo

In 1864 it was the seat of one of the most bloody battles of the American Civil War, today commemorated in the moving Tupelo National Battlefield.

Besides to be the seat of a really original automobile museum, The Tupelo Automobile Museum: it boasts a collection of over 100 authentic vintage cars (included one belonged to Elvis), vintage garages and vintage gadgets included. 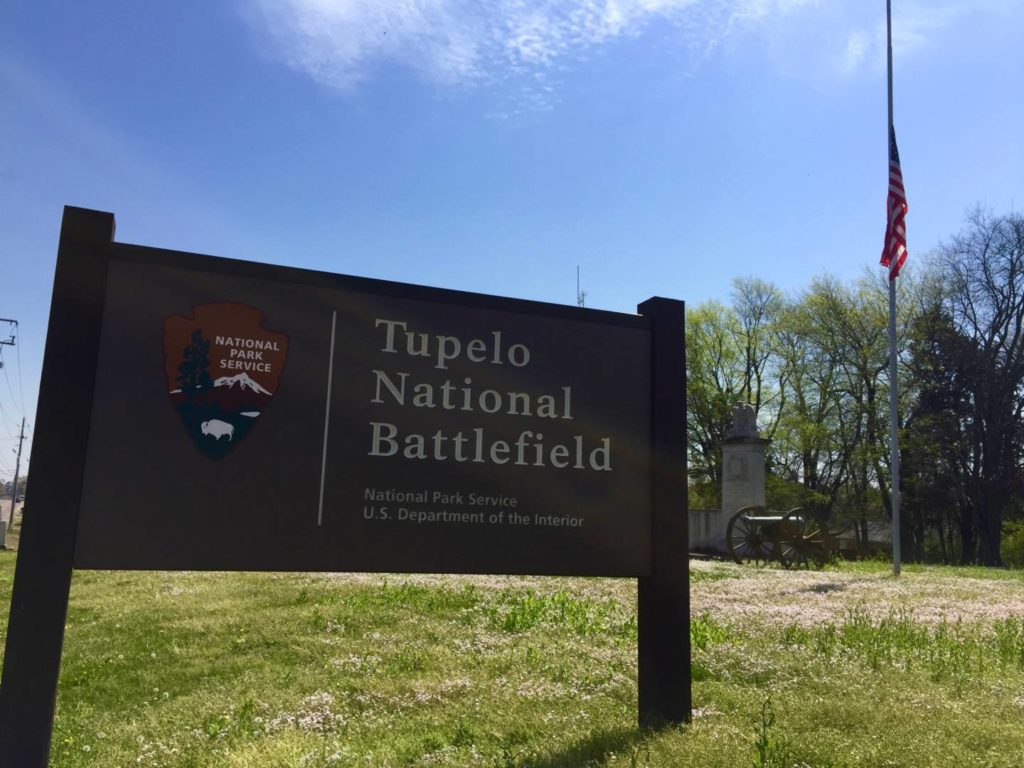 Things to do in Mississippi: Tupelo National Battlefield 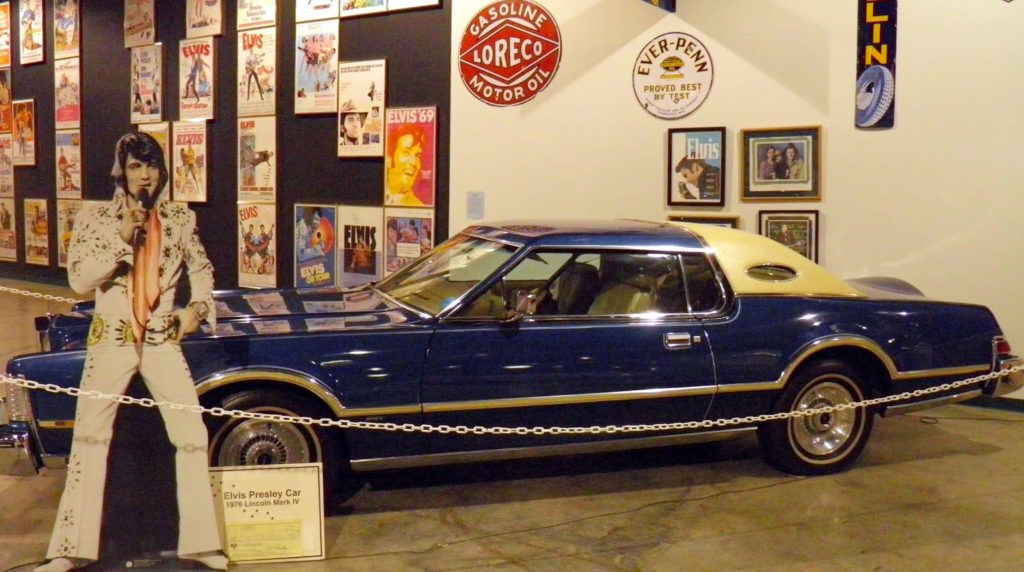 Things to do in Mississippi: Tupelo Automobile Museum, one of Elvis’ cars

Things to do in Mississippi: Elvis Presley birthplace

Elvis was and is – like his rock & roll however – a son of Mississippi.

Hereabout you’d never dare talk about Graceland or the Sun Studio or more in general about Memphis or Tennessee like undisputed homeland of “the king of rock”.

Probably you would receive an answer like the quote above, which is both on the Elvis Presley Birthplace website and inside the little museum near his birthplace. 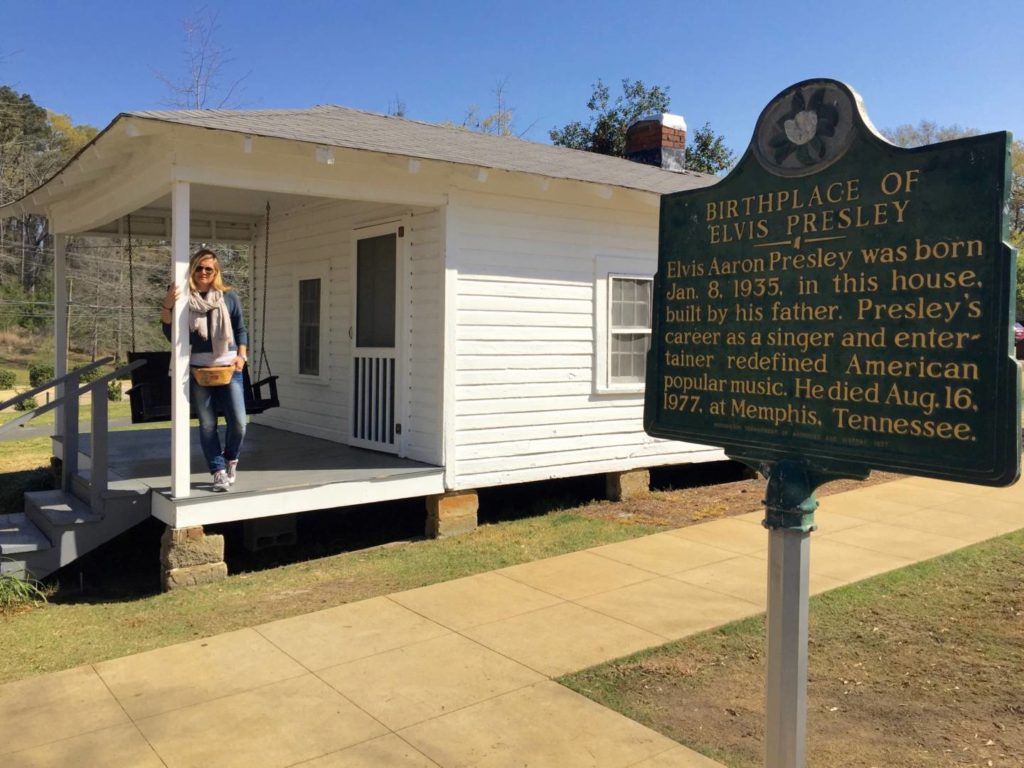 Things to do in Mississippi: Elvis Presley Birthplace

Because everything – the man, the singer, the myth – began exactly from here.

And it’s right here that people have to come to see the places and listen to the stories related to the events – casual more or less– that gave one of the greatest musical legends of the XX century the go-ahead.

Elvis Aaron Presley was born (surviving his twin brother Jessie Garon, born dead) in Tupelo, Mississippi, on January 8th 1935 in a little wood house with only two rooms built by his father and uncle.

Today the same building is the main attraction of the Elvis Presley Birthplace: it is at 306, Elvis Presley Drive, restored and furnished with vintage furniture similar to the original ones, unfortunately lost over time.

The area includes the visitor center with gift store, a museum rich in relics related to the first steps of Elvis in the music world, prizes and awards included and a memorial chapel inside which his personal Bible is kept. 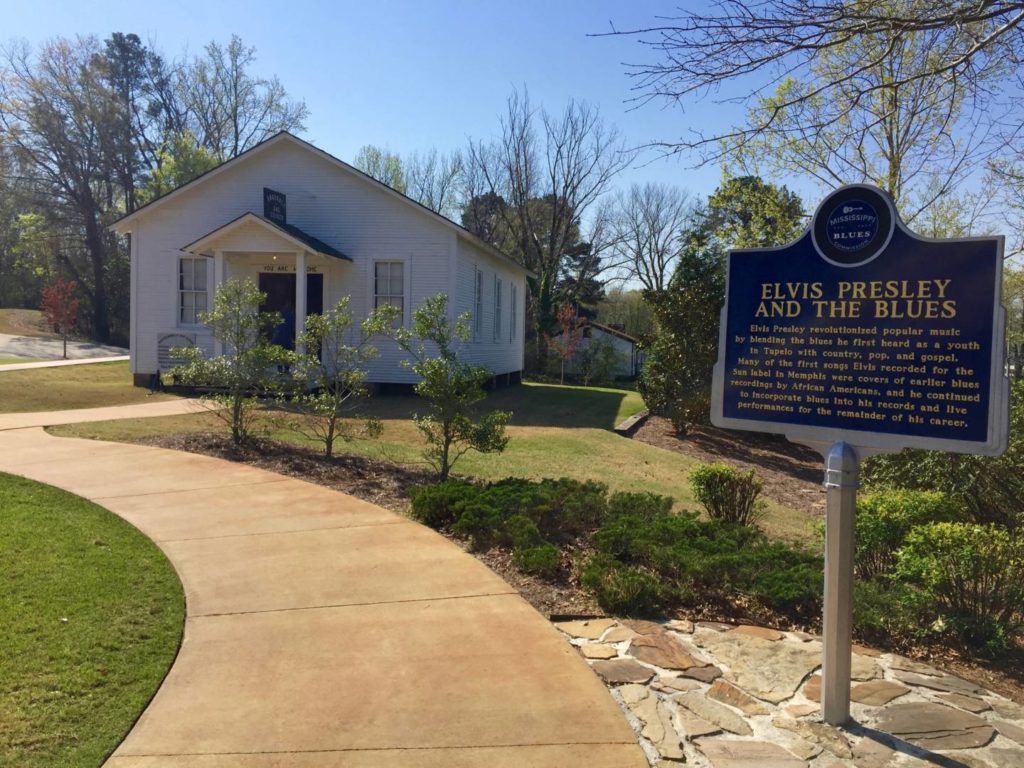 Things to do in Mississippi: the Church frequented by the little Elvis

Less far there’s the wood church frequented by his parents (successively moved from its original site to the Elvis Presley Birthplace), the same where Elvis went to listen to the gospel choir every week, an experience that would have formed a lot his very original musical style.

All around there’s the Walk of Life, a trail of slabs of stone where there the salient moments of Presley’s life and career are engraved. In the center there’s a statue representing him little over 12 with a guitar in his hands. 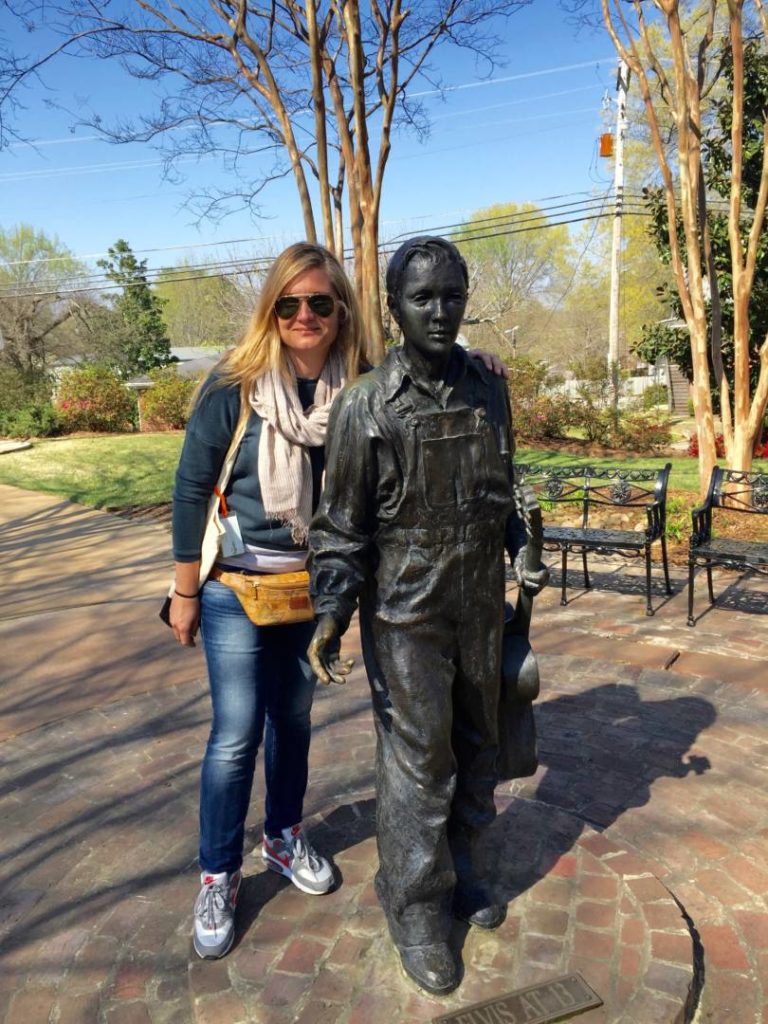 Things to do in Mississippi: Elvis and the Walk of Life (and me)

The tour of the complex – it lasts two hours about – is nice and moving at times.

A period costume guide welcomes the visitors inside the house telling the vicissitudes and the economic difficulties of the Presley and the non-stop moving searching for a job. Together with episodes and details related to Elvis’ childhood.

So suddenly you are in the poor and working America of the 1930s. 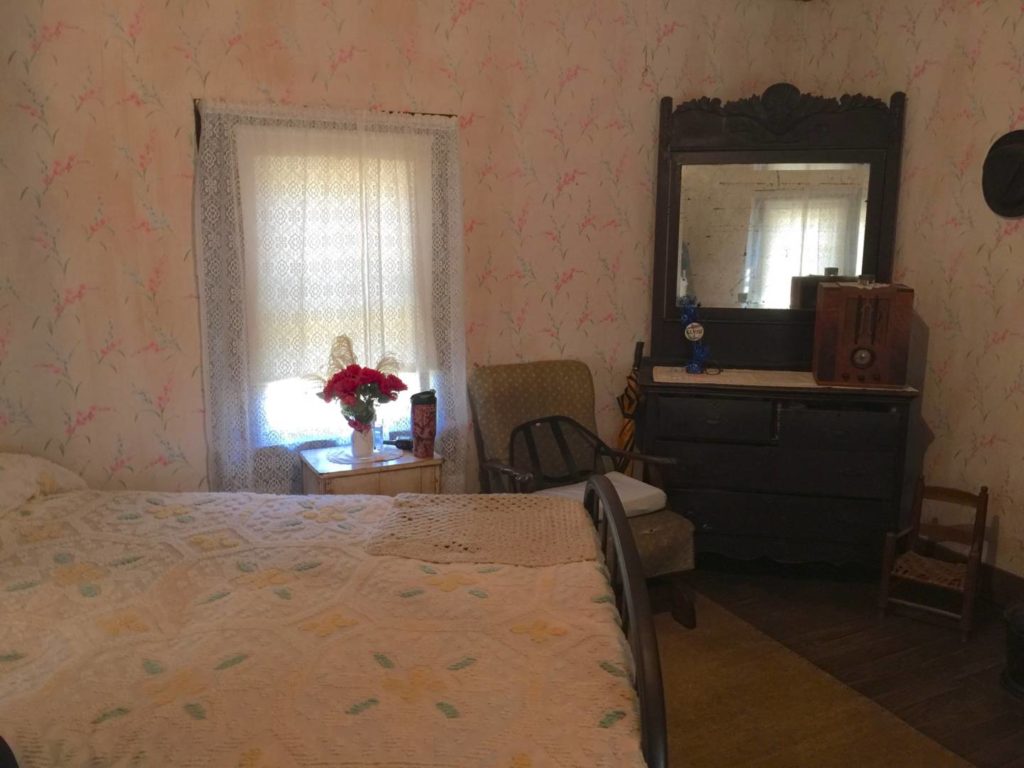 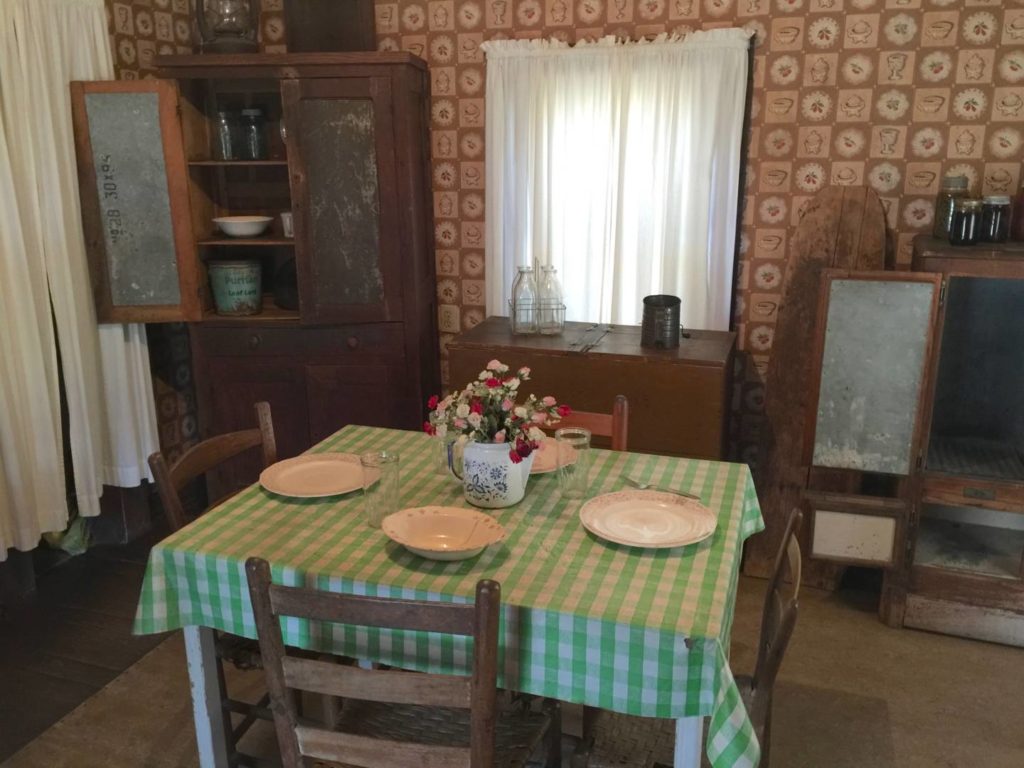 You walk through the alley that from the house takes to the Chapel and then to the museum stopping at the Story Wall commenting on the most important legs of the king of rock’s life.

And at the end of the trail you have desire to buy an improbable Elvis’ souvenir or a CD with his most famous “pieces” in the near gift store and then listen to it in your car, once left again, at full volume. 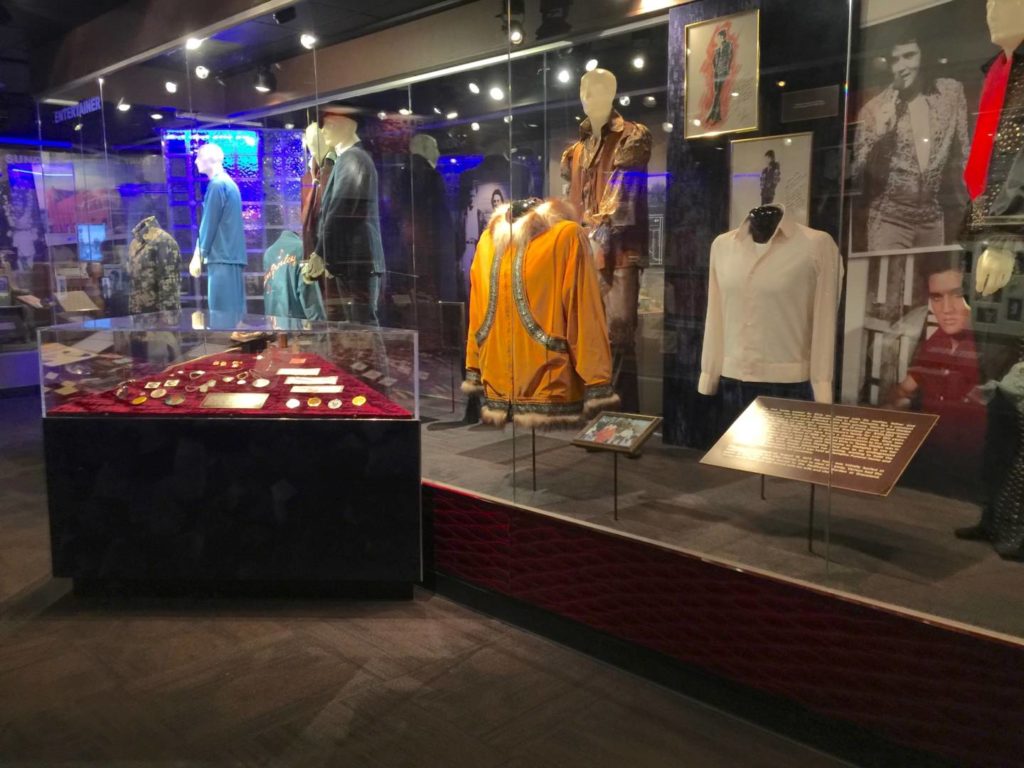 Things to do in Mississippi: the museum

If you arrive in Tupelo in the first week of June, don’t miss the Tupelo Elvis Festival, a festival wanted by the most fond fans. It is besiege by really many doubles, to honor Elvis and remember the impact its music had on the vary musical genres in the world.

A little taste in the video below.

The Elvis Presley Birthplace is opened to public every day from 9am to 5pm. On Sunday from 1pm to 5pm. 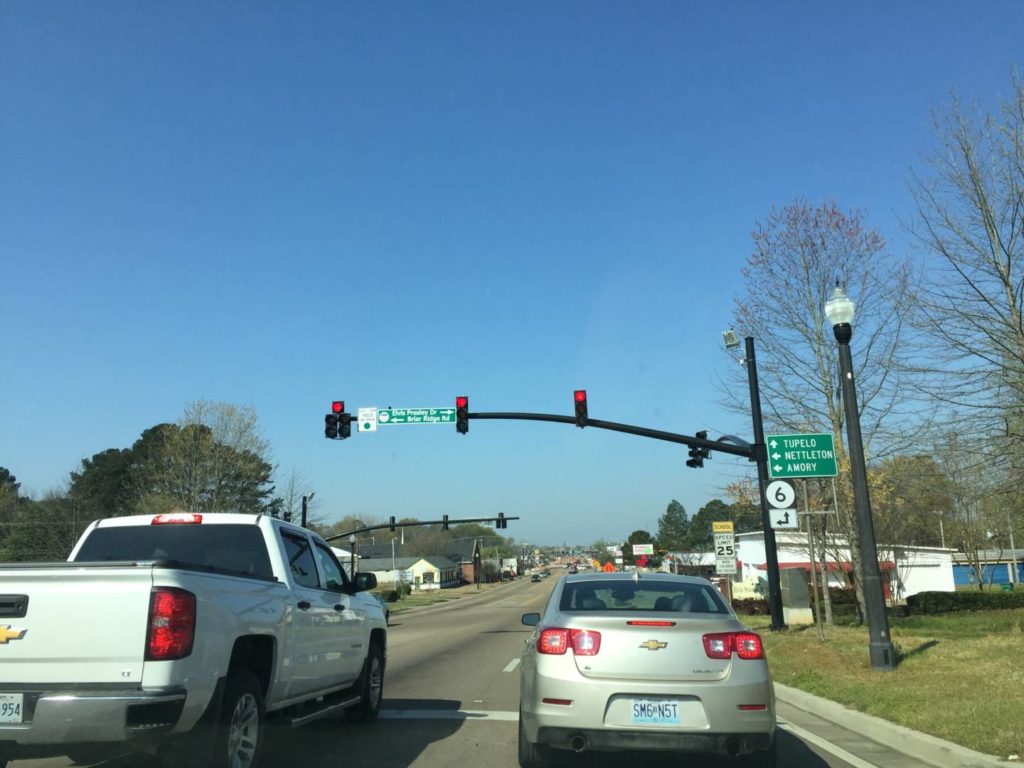 Not many people know Tupelo is one of the legs of a historic American scenic highway, the Natchez Trace Parkway.

12 km far from the Elvis Presley Birthplace, in one of the most suggestive road points, completely swallowed by the forest, it’s possible to stay for lunch, for a short break or to get maps and brochures at the Natchez Trace Parkway Visitor Center, at 2680, Natchez Trace Pkwy, Tupelo.

It is opened every day from 8am to 5pm. 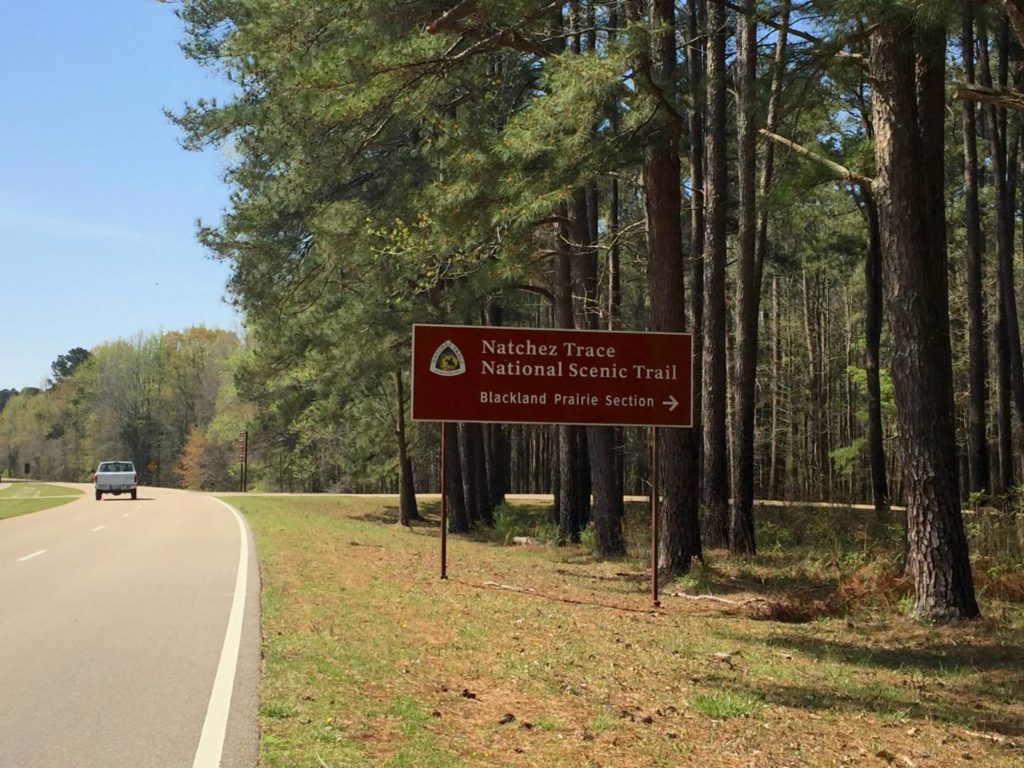 The ideal place to get info – thanks to the well prepared rangers – about the history of the trail, the geology of the place and about the vary nature path to set out on in the neighborhood.

The Natchez Trace Parkway is an ancient way of communication, already used over 10.000 years ago by the American Natives, and then by farmers, traders and at the end of the 1800s by the Union Soldiers – during the Civil war – to create an opening (and at the same time a way out) towards the Southern Confederate States. 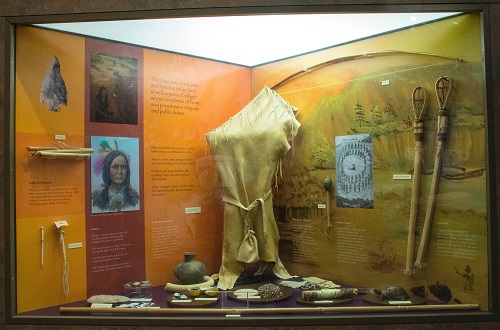 A winding trail starting from Nashville in Tennessee, crossing a little part of Alabama and then a good part of Mississippi as far as arriving to Natchez, Mississippi.

Along the route you run into plains, cotton fields, ancient and precious vintage mansions, battlefields of the Civil War, farms, ceremonial graves of really ancient Natives tribes, lagoons and forests.

A suggestive and relaxing road allowing to enjoy the best of this South area of the United States in little over 700km.

What’s the best season to “live” a road trip on this wonderful highway?

The Autumn, without any doubt.

The temperature are milder and nicer, rains (and mosquitoes) disappears almost entirely and the intense shades of foliage cover clearings and forests making the trail even more suggestive and charming, if it is possible. 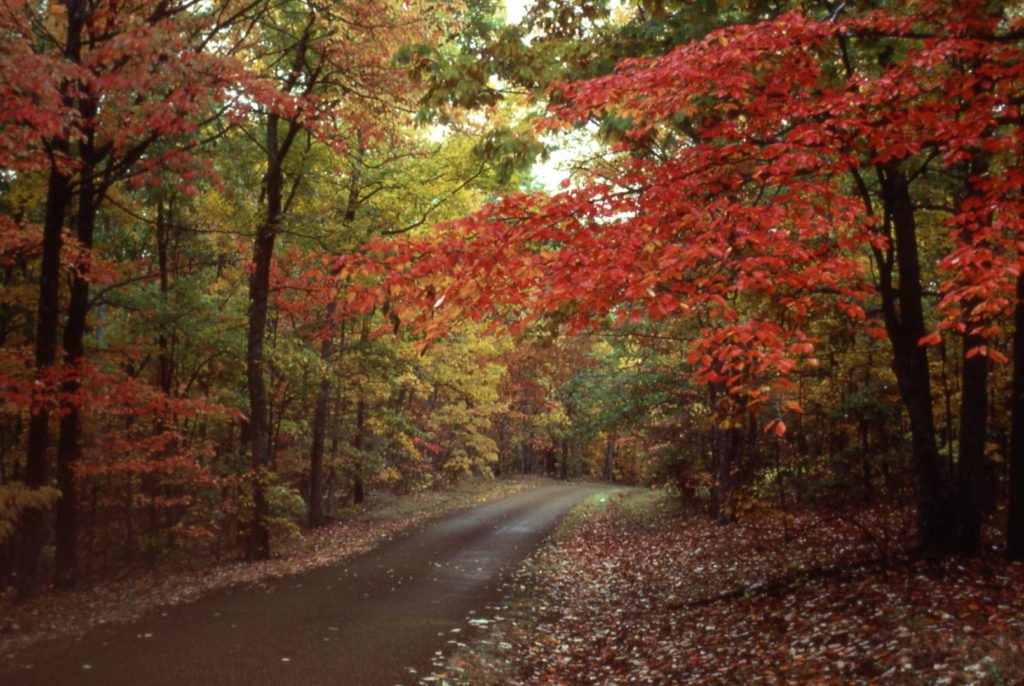 Things to do in Mississippi: the season of foliage on the Natchez Trace Pkwy (nps.org ph. credits)

Another unforgettable, unique and special “piece” of States to tell.

My – and yours, if you want – things to do in Mississippi. 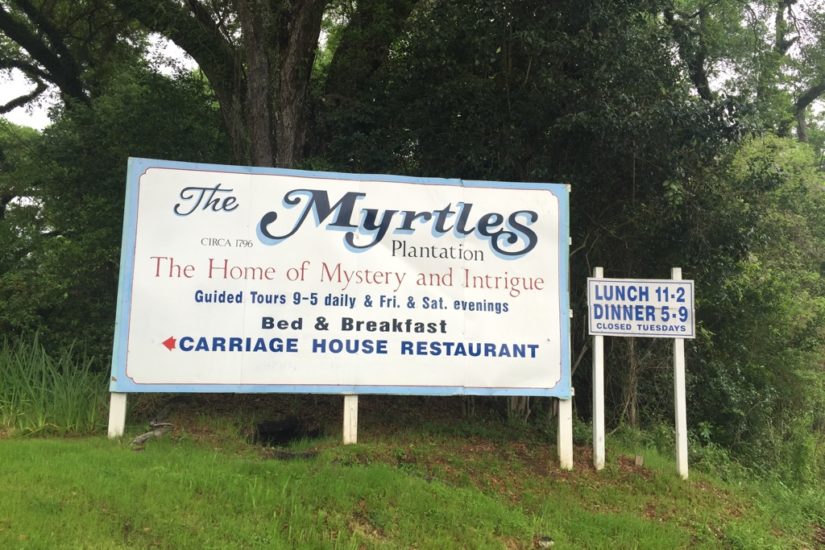 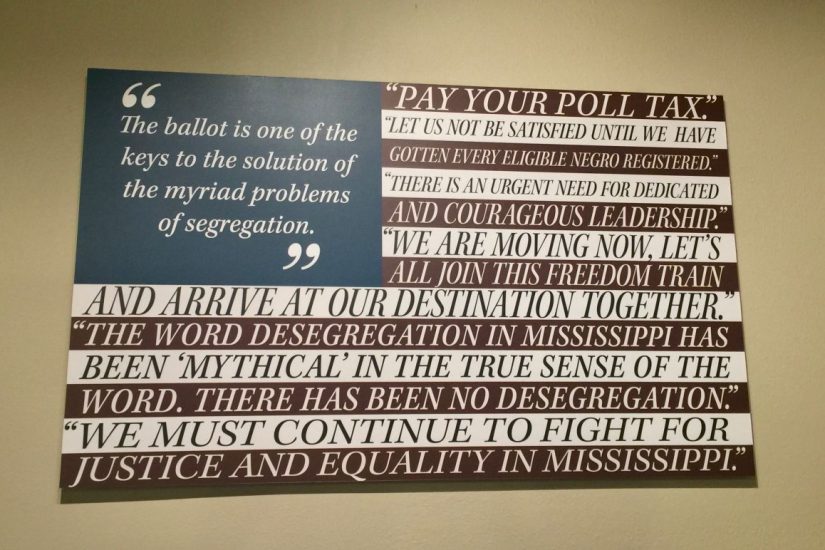