The Native Americans who liberated Italy: a journey through the Romagna (and Le Marche region) discovering their stories and their “forgotten” graves in the War Cemeteries of Gradara, Coriano, Cesena and Ravenna. An unusual and emotional itinerary – it will soon become a guided tour – into the places where 17 valiant volunteer Native Americans fought and died in the summer of 1944 following the Commonwealth allied troops, in the final phases of the Second World War.

During the Second World War thousands of young Native Americans, following the Canadians and American troops, joined up voluntarily and fought valiantly, performing lots of heroic deeds both on the Pacific side – where the use of their idioms was crucial in the encrypted messages (they couldn’t be understood by Japanese) – and on the European side.

Fond of, expert on and narrator of the history, the places and the cultural traditions of the Native Americans since ever, here you can find a series of reports about it, I have been collaborating for years with the official association gathering and promoting them –Aianta, American Indian Alaska Native Tourism Association. I had had the chance to read up, thanks to the several information given by the official website Way We Serve – honoring the generations of Native Americans who served in the armed forces of the United States, starting from the American Revolution – about the participation of the latter in the Pacific conflict from 1942 on.

“I found out I am not only fighting for the bitty piece of land I talk about, my immediate family.

I found out I was fighting for all Indian people, all the people of the United States” 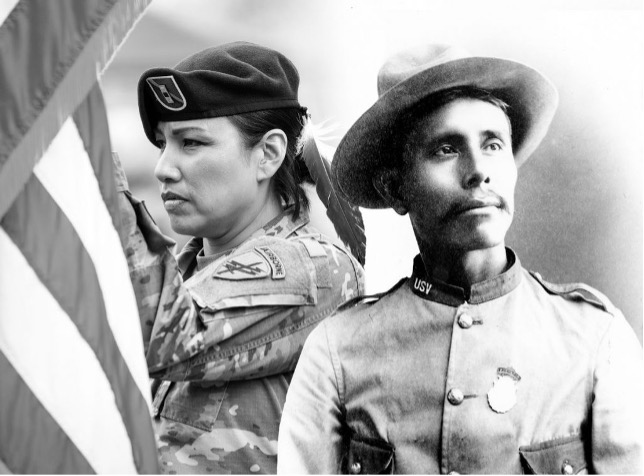 However, I knew really little about their presence on the European side, from 1943 to 1945.

It has been the very beautiful book by Matteo Incerti “The American Indians who liberated Italy” which allowed me to discover the stories and heroic deeds of 3000 Native Americans who fought in Europe, in the bloody final phases of the Second World War.

His was a really huge work to track down the names, the stories and the “forgotten” graves of those valiant Natives. A work carried on together with the ancient members of the tribes – between the United States and Canada – they came from. Among them Navajo, Apaches, Creek, Cherokee, Pawnee, Choctaw, Sioux, Mohawk, Cree, Ojibwa and Irochesi.

While reading the book and discovering the stories of thousands of Native Americans who joined up voluntarily to defend that same freedom right which in their native communities in Canada and in the United States was still denied, I found out that among those 57 Native Americans (50 coming from Canada and 7 from the USA) died in Italy, even 17 who valiantly fought and contributed to the breakthrough of the Gothic Line following the Commonwealth troops are buried in the four most important War Cemeteries in Romagna, and in Le Marche region for a small part. Among them Irochesi, Mohawk, Cree and Ojibwa. 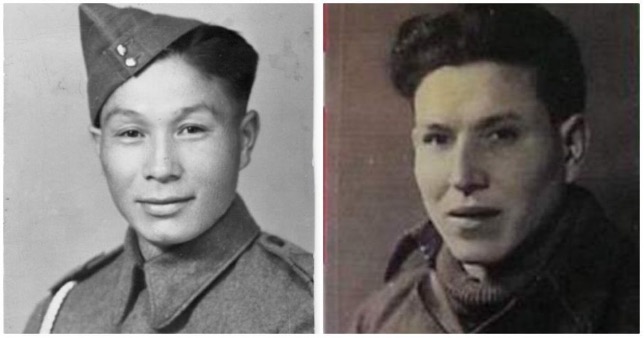 The Native Americans who liberated Italy: a journey through the Romagna, among war cemeteries and “forgotten” graves – Ph. credits RSN

So I became fond of their story and, since I live in Romagna just a stone’s throw from many of the locations quoted in the book, I looked for their burials and their stories. A really emotional experience – really powerful in traits – and yet essential to get the character of

these men. And above all arrive to understand the reasons which pushed them to fight for other people’s freedom, in the hope (in many cases it proved vain) the final victory would have granted their own Reservations in the homeland a sort of “liberation” from the confinement and discrimination conditions they were suffering.

Please, find here the entire live of my journey in my Instastories.

“They were ready to die so that in Italy as well as in all Europe, freedom and democracy could come back.

Ready to fight for other people’s freedom, even if in Canada and in the United States

those Natives who had left for Europe were still discriminated.”

Find down here the stages of my “journey” discovering their passage and their “forgotten” graves in the War Cemeteries of Gradara, Coriano, Cesena and Ravenna. 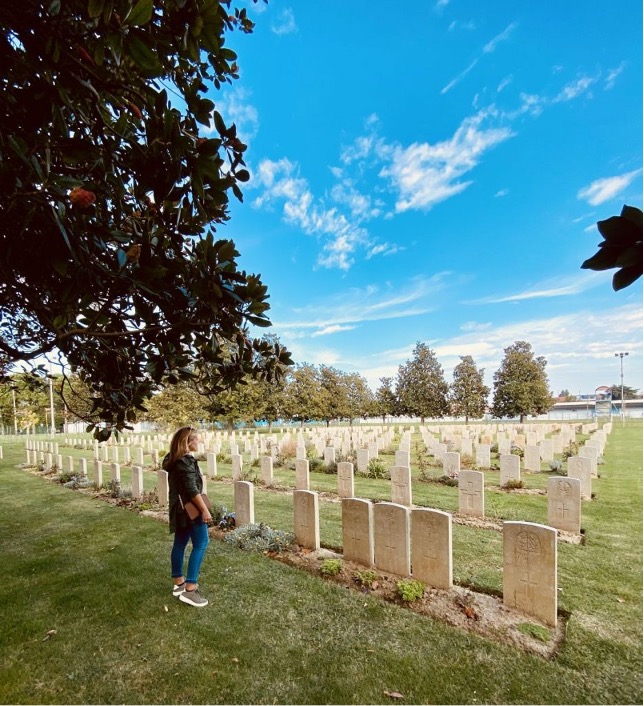 The Gradara War Cemetery lies on one of the hills downgrading progressively towards the Adriatic Coast and is located in Le Marche region, literally just a few thousands meters from the border with Romagna.

So as well as the war cemeteries of Coriano, Cesena and Ravenna, it is a land hosting the bodies of about 1200 among soldiers and aviators following the Commonwealth’s troops (Canadians, English, New Zealanders, Indians, etc.) who fought and died because of the breakthrough of the Gothic Line, given as a thanksgiving sign by the Italian people for their burial. It is entirely run by the Commonwealth War Graves Commission, whose task is to honor and preserve the graves of almost 2 million men and women – Commonwealth’s members – died during the First and Second World War, spread all over the world. 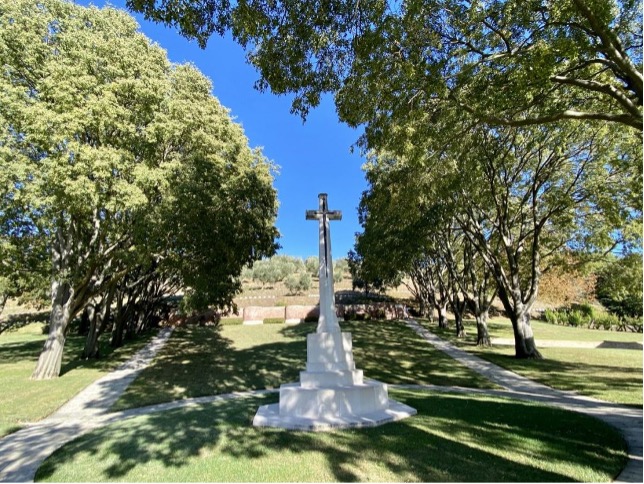 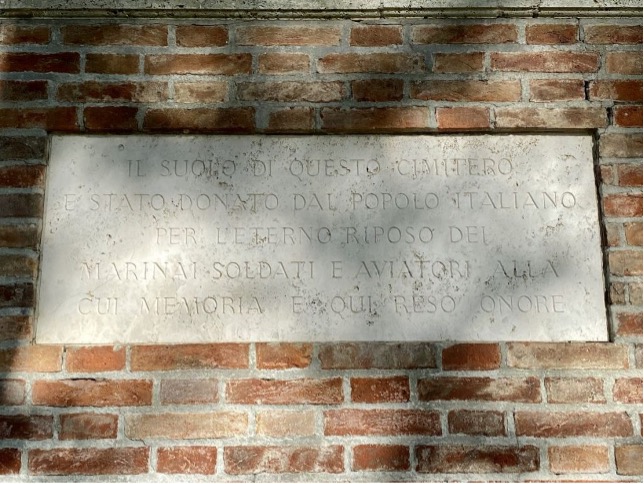 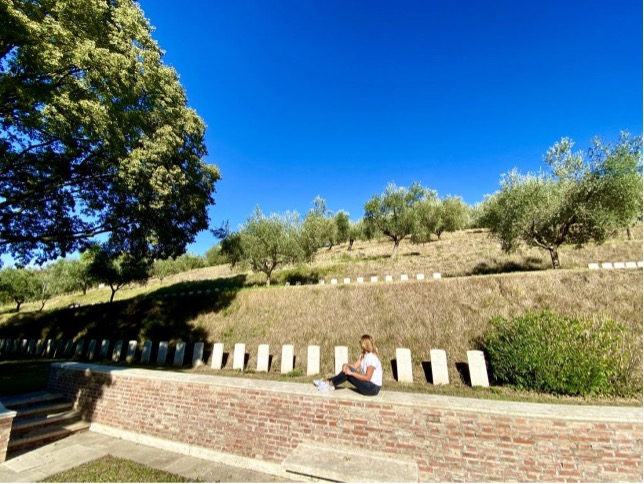 The 9 terraces hosting the graves of the fallen militaries are framed by dozens of centenary olive trees and oriented toward the hill of the Gradara Castle. A really extremely suggestive view.

On one of the last rows on the top of the hill Francis Nadjiwan –Ojibawa– is buried. He died in action on these hills when he was only 20 on September 13 1944. 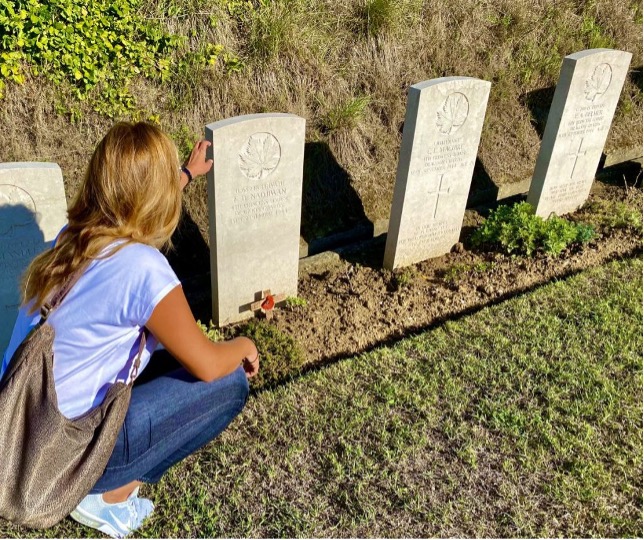 To track down the position of his grave, you just need to get access to the Memorial Chapel, located at the entrance on the right, and look up the burial map. You can leave a personal thought in the Visitor Book at the end of the visit. Then, if you want, you can leave also some flowers, maybe red flowers, one of the colors of the Ojibawa. 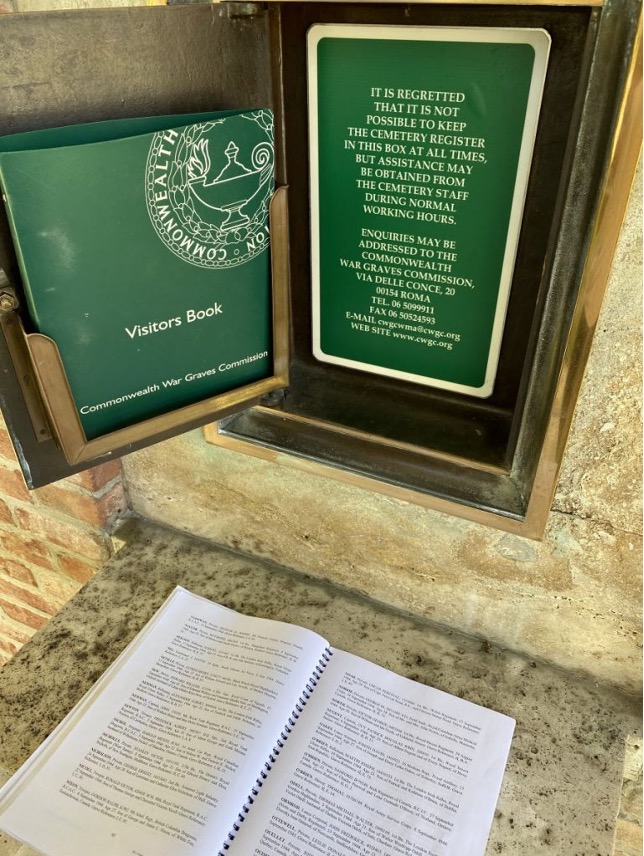 The Coriano Ridge War Cemetery is located about 3km far from Riccione and it can be reached detouring westwards from the SS 16, about 1km north-west of Riccione.

It rises in a plain neighbored by small hills, on one among the most difficult passages of the trail of the allied advance in the Adriatic sector in the Fall of 1944. 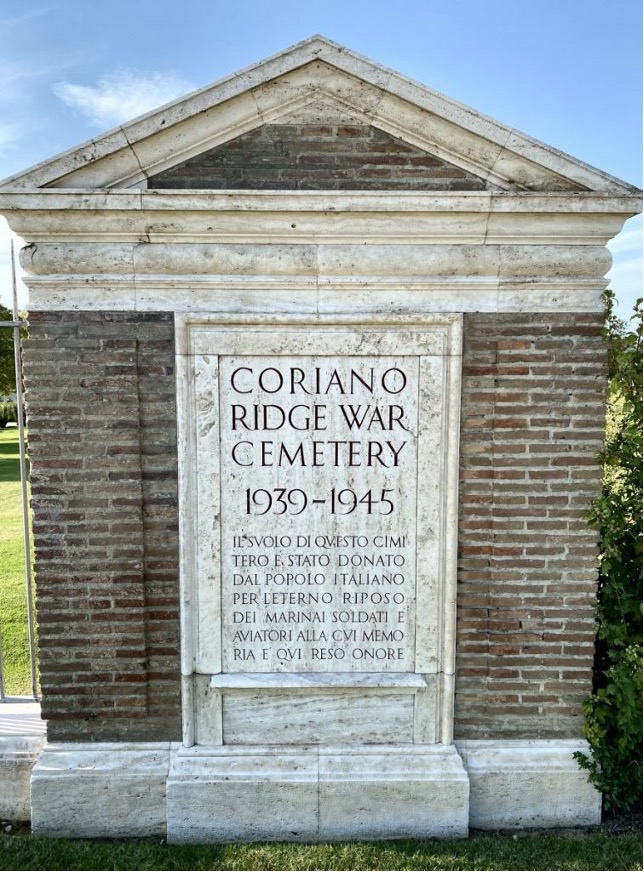 German paratroopers and panzer troops withstood all the attacks to their positions between September 4 and 12, 1944.

However, in the evening of September 12 The Eighth Army attacked again with the 1st English Armored Division and the 5th Canadian one. All this marked the beginning of a week of atrocious fighting with daily casualties for the Eight Armored – about 150 victims – but at the same time it decreed the victory and the passage of the Allies. 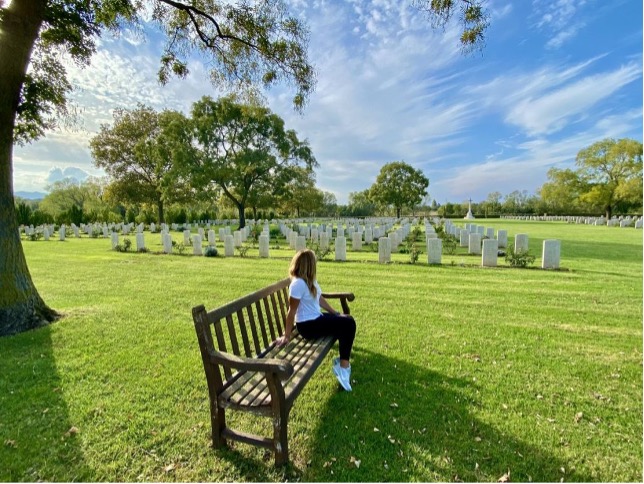 Even in this case to track down the burials, you just need to look up the map inside the memorial, on the right just after the entrance. 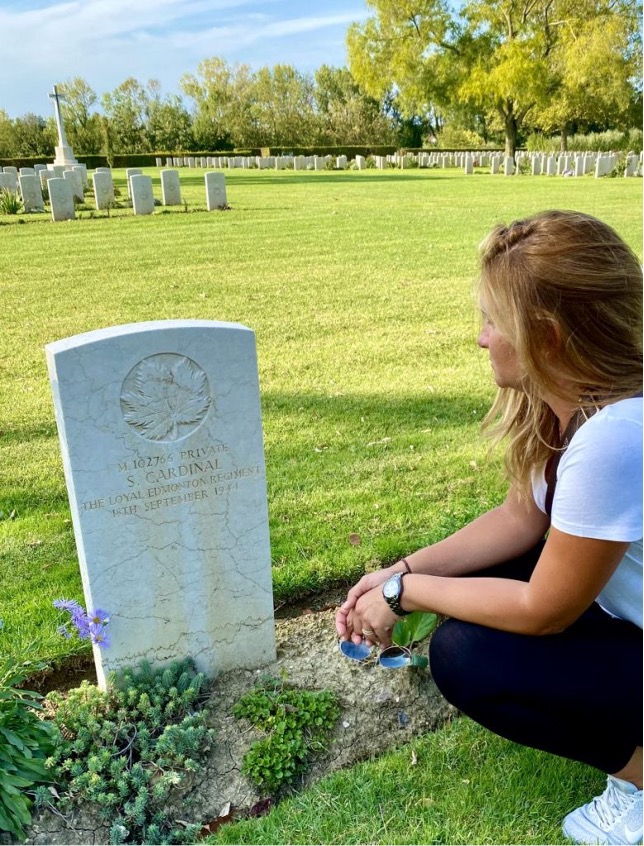 The Cesena War Cemetery is incorporated in the first suburbs of Cesena Municipality, literally neighbored by a modern sports facility. Namely the address is Via Spinelli – 47023 Cesena (FC) Emilia Romagna.

The most part of people buried in this cemetery died during the advance from Rimini to Forlì and beyond in September-November 1944. 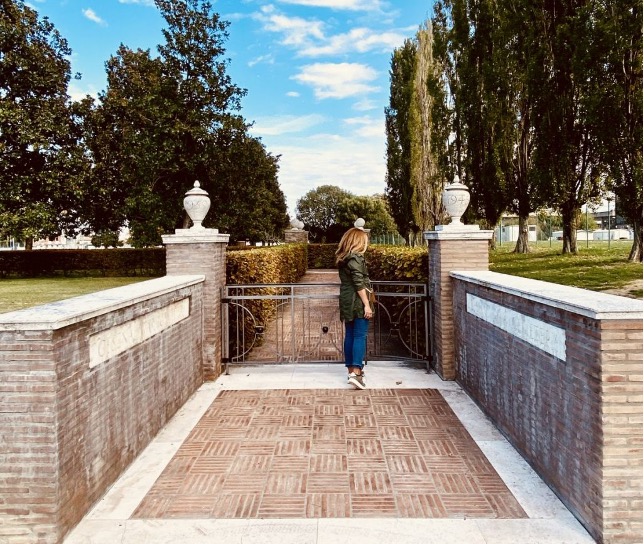 775 among soldiers and aviators of the Commonwealth rest here, 6 of them were Native Americans.

Even in this case to track down the burials, you just need to look up the map inside the memorial, on the bottom of the avenue on the left, just after the entrance. 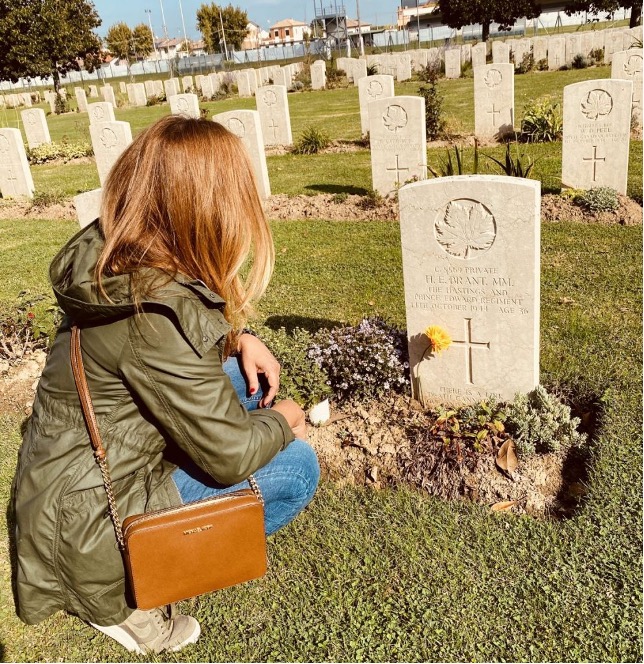 The Ravenna War Cemetery is located in Strada Provinciale 30, 1km southwards the SS 16 from Ravenna to Ferrara near Piangipane, Ravenna province. The right address is Via Piangipane 24B – 48100 Piangipane (RA) Emilia Romagna.

Ravenna was sieged by the Canadian Corps at the beginning of December 1944, and the burials in the cemetery – 956 exactly – are mostly related to the victims of the fighting for the Senio Line during the first three months of 1945 and also to the fallen (so-called) Monument Man. The latter spite of their own lives fought not only for the freedom of men, but also to save the monuments and the entire old town of Ravenna city. 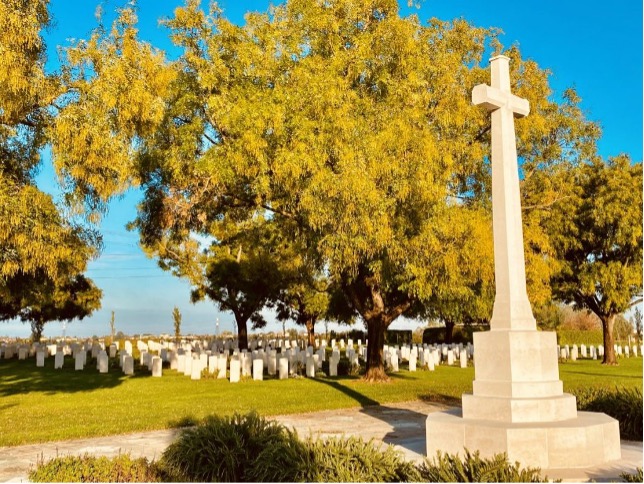 However, this sacred place – probably the most moving from a historical, cultural and emotional point of view, in my opinion – also preserves 33 graves of the First World War. In addition to those ones of Indians of the 10th Indian-New Zealander Division and North Africans Muslims fighters, whose graves are oriented towards La Mecca – with respect of the Islam tradition. And little far those ones of 33 men of the Jewish Infantry Brigade Group, the famous Jewish Brigade formed in September 1944 mainly by volunteers, who wanted to support the cause of the Allies against the Nazi invasion and bring justice to the victims of the Holocaust. 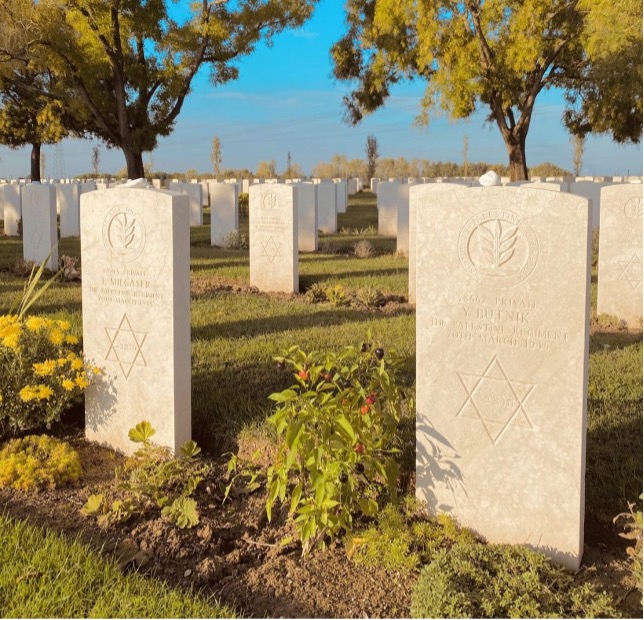 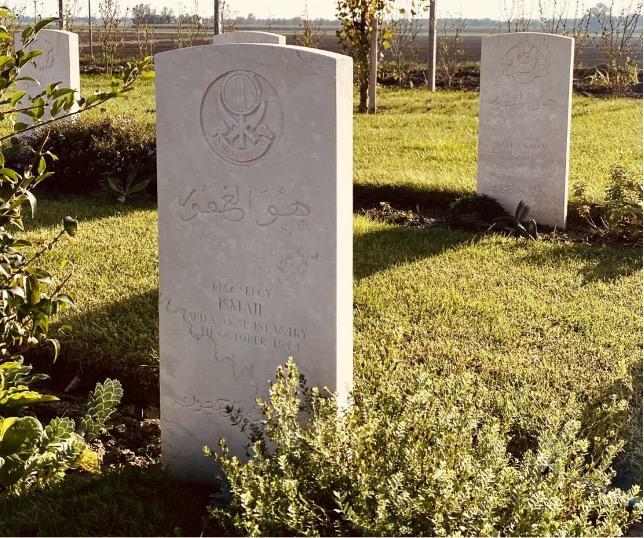 Together with them, among Canadian soldiers, even 7 Native Americans.

Even in this case to track down the graves, you just need to look up the map inside the memorial, inside the chapel on the right, just after the entrance. 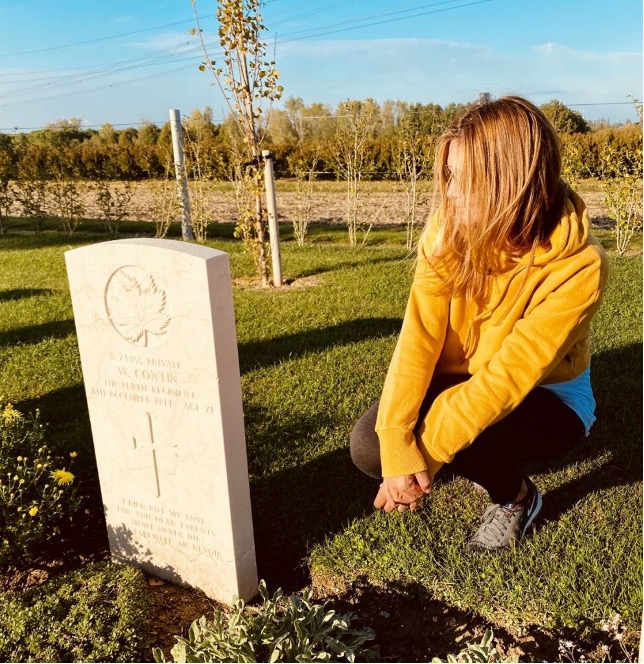 The Native Americans who liberated Italy: the day-tour organized for next Spring-Summer 2021 in collaboration with Antesignum Tours

Following the discovery of these places, the narration and the sharing on the social networks of stories, videos and pictures related to it, a sincere, growing and fond interest from many readers is born. They are interested in these places and in the events tied to the figures of the valiant Native Americans and of who – Canadians, New Zealanders, English, Arabians, Palestinians etc. – died in a foreign country in the name of Europe’s freedom.

So, together with the Antesignum Tours – which has been dealing for years with passion and love with the promotion of the land of Romagna and Le Marche – we have decided to create a series of day-tours starting from Spring 2021, visiting at least two of the War Cemeteries quoted, The Gothic Line and the museums related to them and walking tours through the old towns of Gradara, Rimini, Cesena ad Ravenna included. 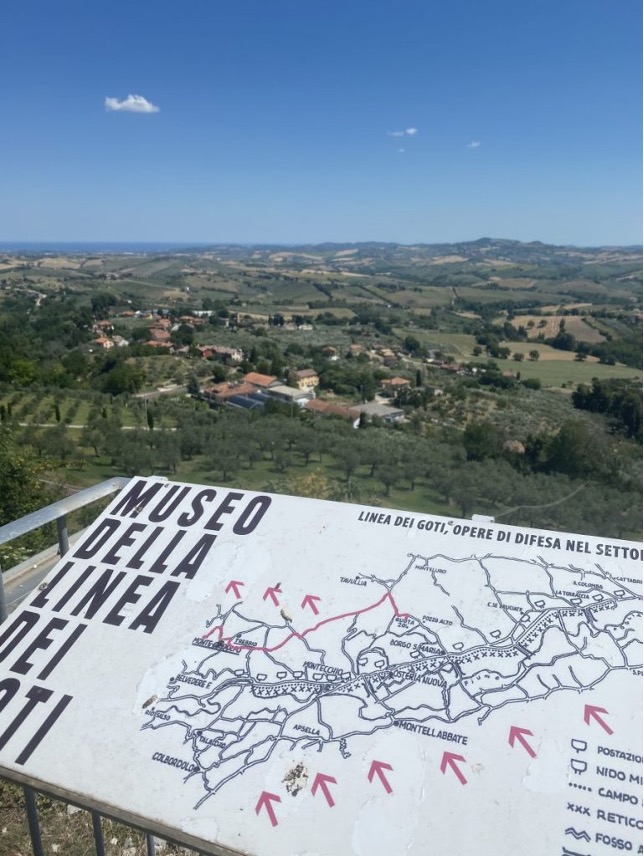 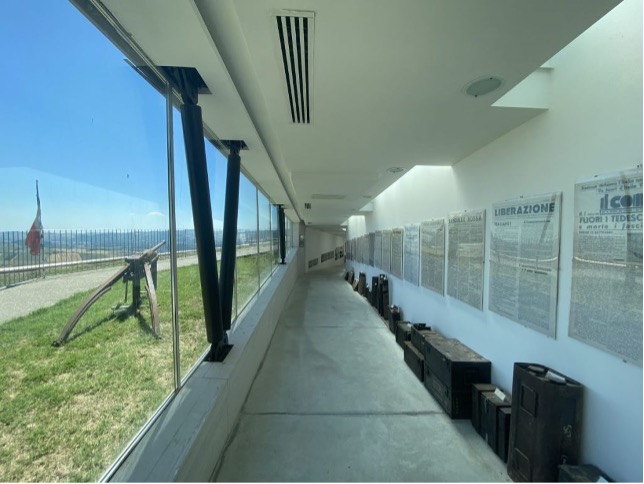 All this with me, as an expert on and narrator of the history of the Native Americans, besides an official chaperone and a guide specialized in every single location.

For any other info and updates – in a while the planned tours will be published on the official website of Antesignum Tours – you can send an email to info@antesignumtours.com or call the phone number 380/1470003. Or have a look at our Instagram accounts, @sacrisimo e @antesignumtours.