Discover Montgomery: travel guide, impressions and tips about the capital of Alabama

Discover Montgomery: travel guide, impressions and tips about the capital of Alabama 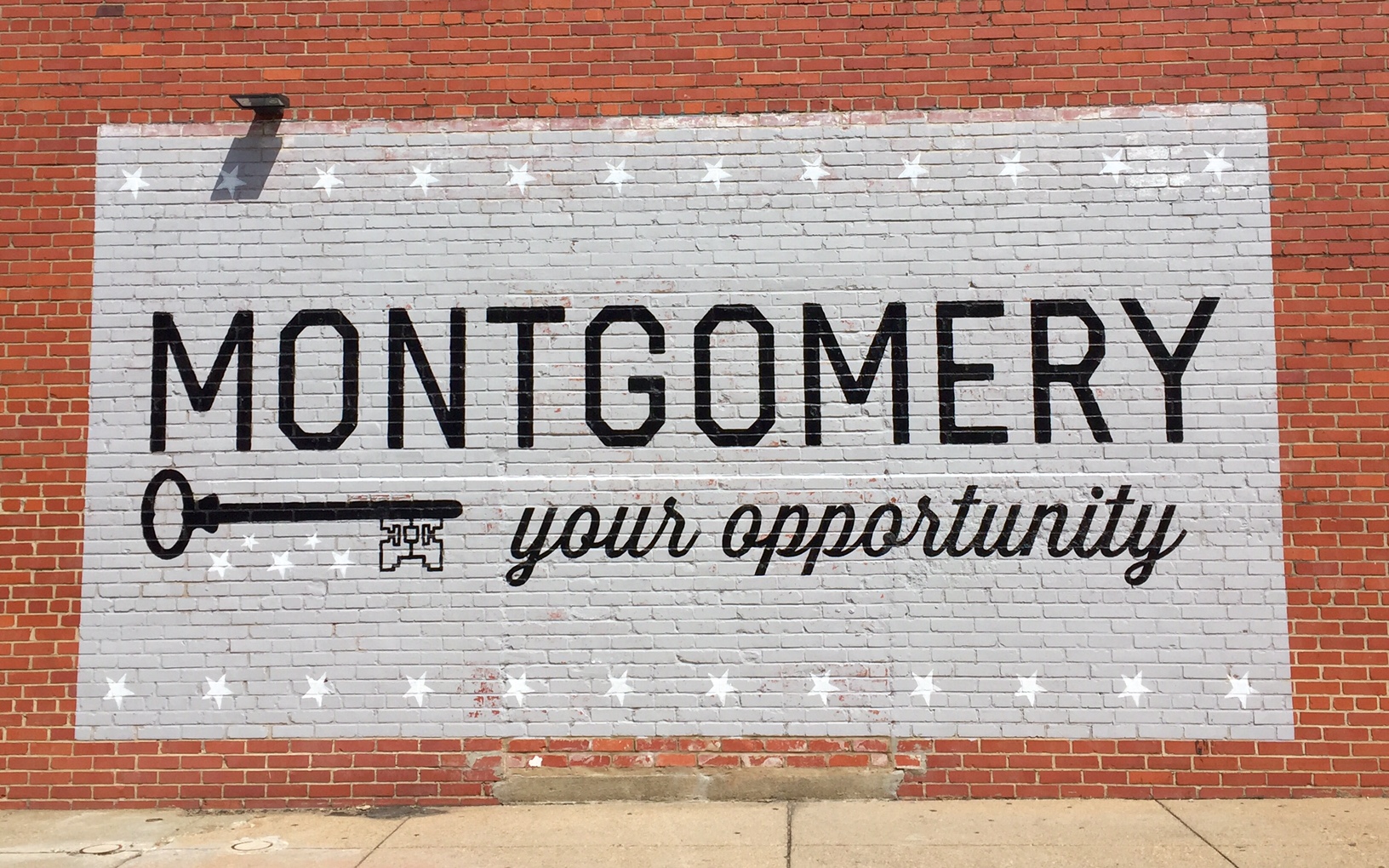 Why deciding to discover Montgomery, the capital of Alabama? 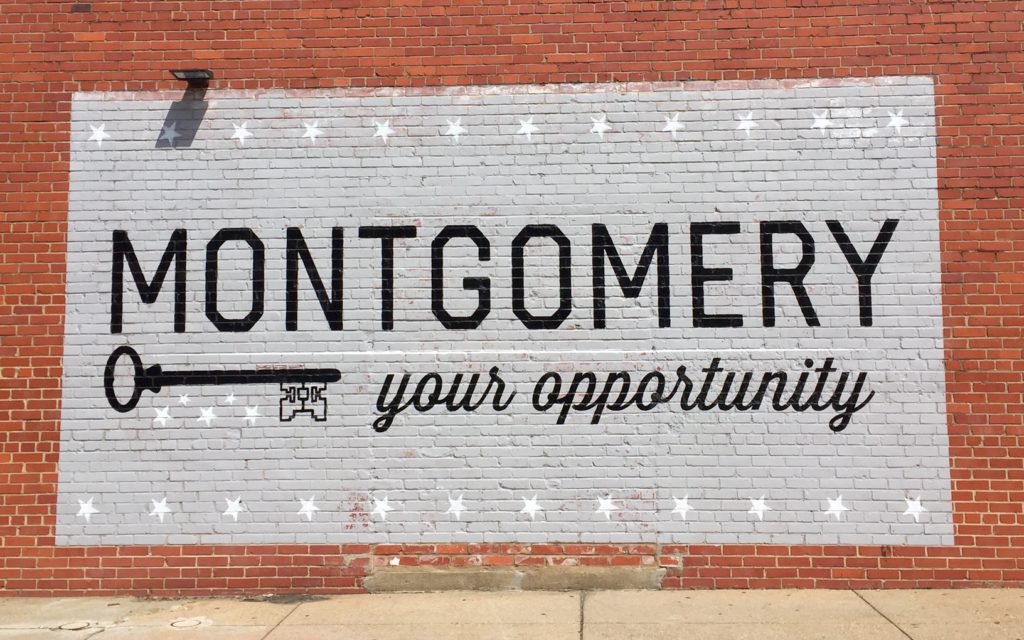 Instinctively I should answer, actually without thinking about it so much, to go over the itinerary (rich, intense and deepened) about the history and the events concerning the evolution of the Civil Rights: the famous pacifist movement for the affirmation of all Afro-Americans civil rights, led by Martin Luther King between 50s and 60s.

The movement lived its important moments – often tragic and painful – just exactly in Alabama, specifically in Birmingham, Selma and above all in Montgomery. 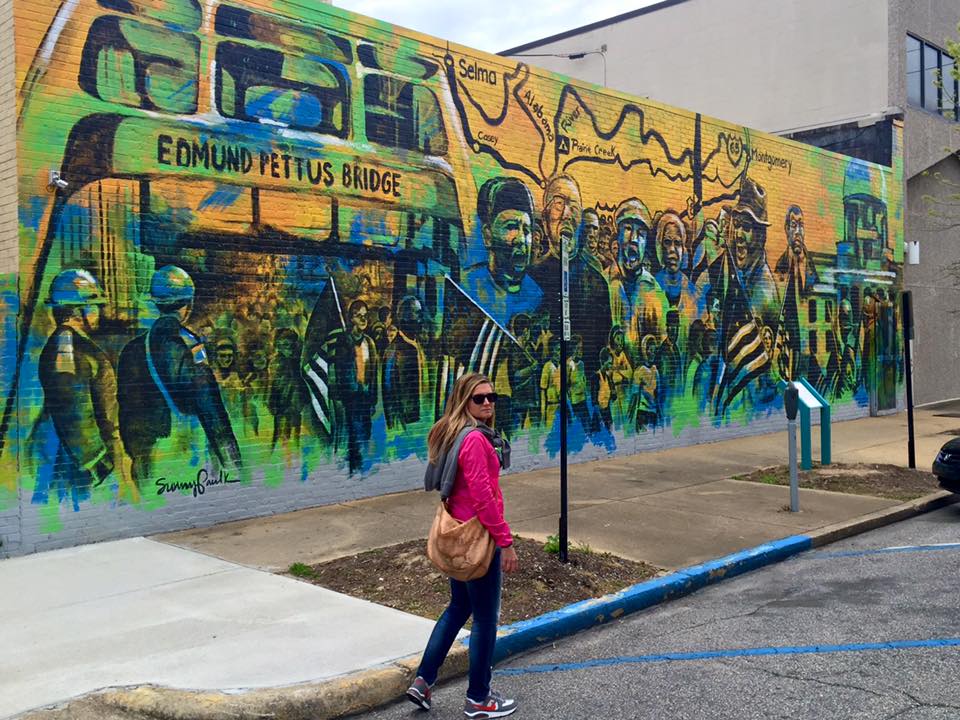 And if I tell you Montgomery isn’t only Civil Rights?

If I tell you about Scott Fitzgerald, his house, his intense life here, his wife Zelda (incredibly as beautiful as crazy) and about his most famous novel, the Great Gatsby?

If I mention Hank Williams, undisputed myth of the country music (still incredibly loved today), his music and an entire path dedicated to his short life?

If I show you the photos of a sunny afternoon on a steamboat along the Alabama River and immediately after I take you to the ancient and original dwelling houses of the Old Alabama Town for a walk, or even to the first White House of the Southern Confederate States, those one President Jefferson Davis’? 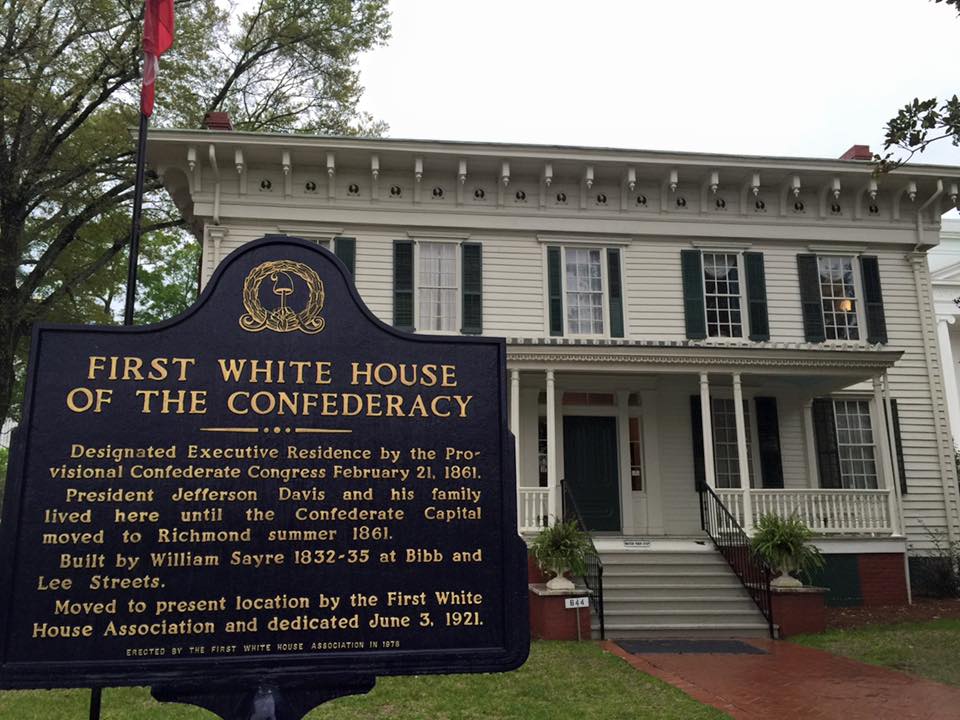 If I go with you to the places where black slaves were auctioned and successively switched among the several plantations?

If I tell you about the places, the histories and the emotions until evening and then I suggest you some of the most traditional and picturesque places where to taste the real Southern cuisine and after that stay up late on the notes of Sweet Alabama? 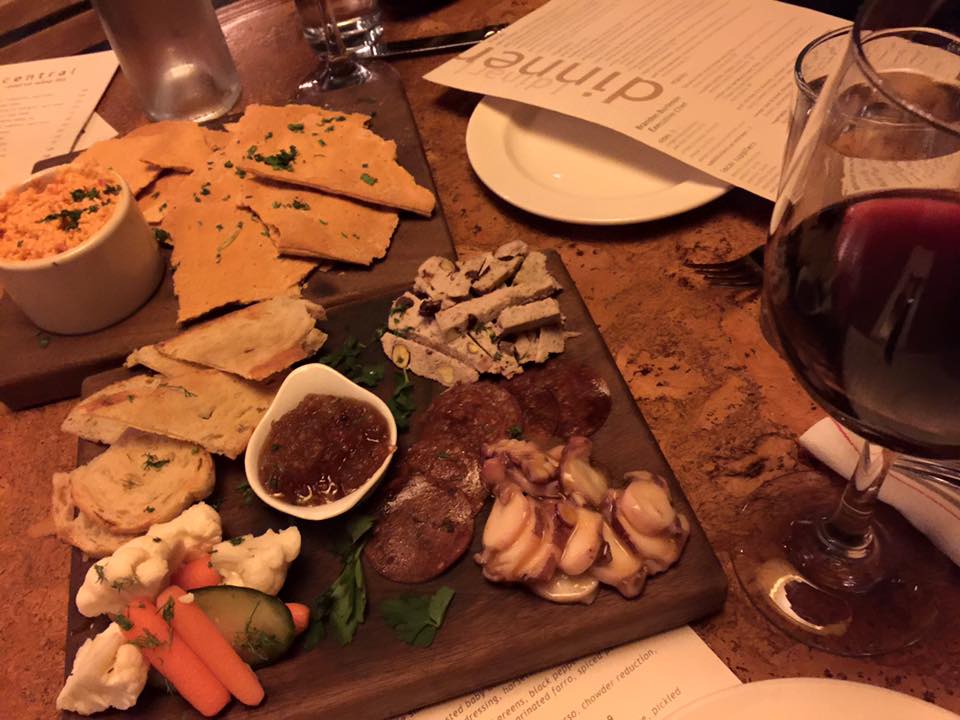 Montgomery – as like the whole Alabama – is not a sad city – like most of people think and say (unfortunately due to its hard past related to the Civil Rights episodes).

That’s why after have lived it strongly like a local, explored it and understood it almost in part thanks to the stories and the cues given by the wonderful people of the Montgomery Convention and Visitor Bureau, I decided to tell you about it through itineraries and interests to let everyone find what is searching for and live in your own way a unique experience. 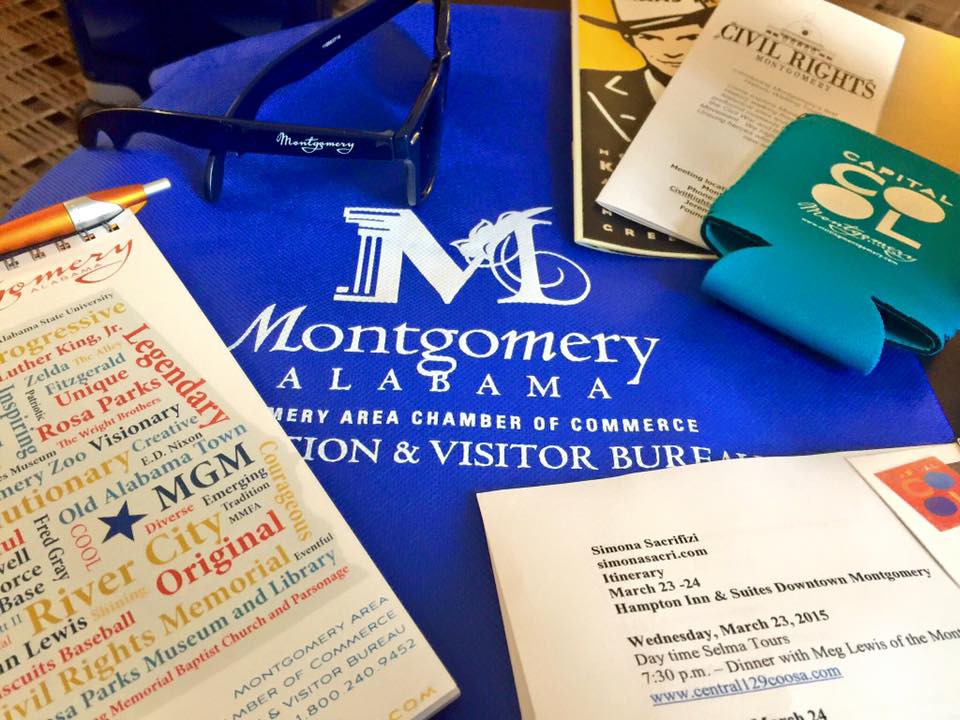 Discover Montgomery: what to see and how moving

The major attractions of the town are almost all in the downtown area extending from the Alabama River as far as the Alabama State Capitol. The ideal thing is leaving the car and move on foot to visit the several locations.

If you are interested in the history and in the events about the Civil Rights, absolutely you cannot miss the visit at the Rosa Parks Library & Museum. 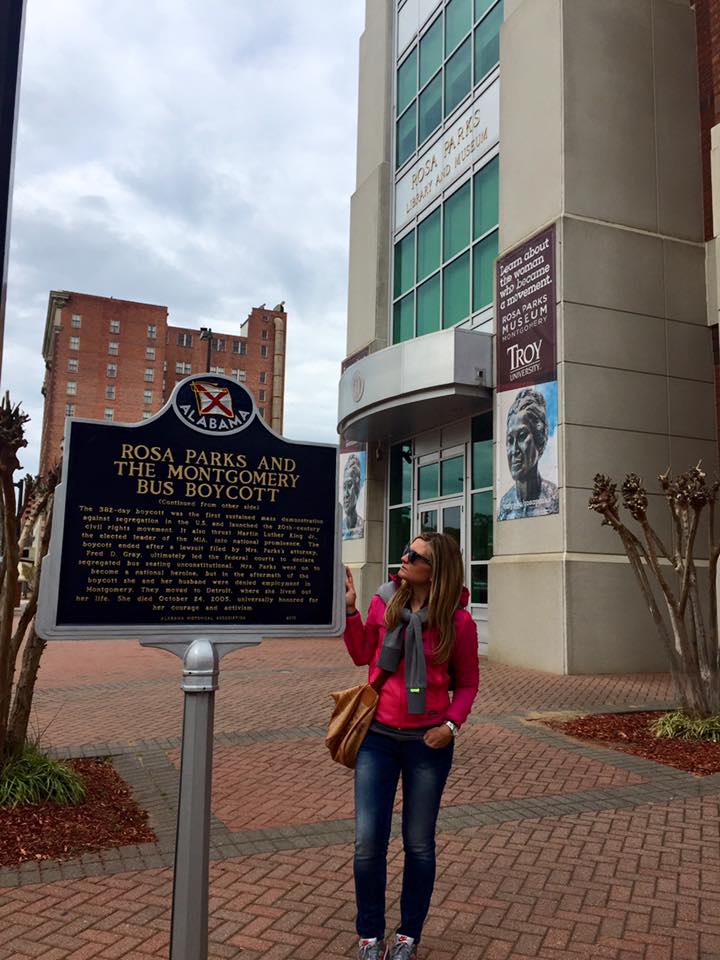 The museum is in the exact place where Rosa Parks refused to give up her seat on the bus to a white man which was standing, triggering a series of events taking to the boycott of the whole city bus service by the Afro-Americans for a so long period – 382 days – that the company of public transport was on the brink of bankruptcy.

In a year the segregation on the buses was abolished and the Civil Rights Movement was born officially.

Many people said that day I didn’t stand up because I was tired. But that’s not true.

Instead I was tired of giving in.

The visit (necessarily guided) allows to relive the entire episode thanks to the filmed sequences, the historical documents, the multimedia 4D presentations and thanks to the original bus where the events happened.

The museum is at 252, Montgomery Street: it is opened all days but Sunday from 9am to 5pm (on Saturday until 3pm) and the visits start one hour intervals.

Always in the area it’s possible to visit the Civil Rights Memorial Center at 400, Washington Ave. A sort of really touching memorial museum where all the victims of the racial persecution during the Civil Rights period are remembered and honoured. 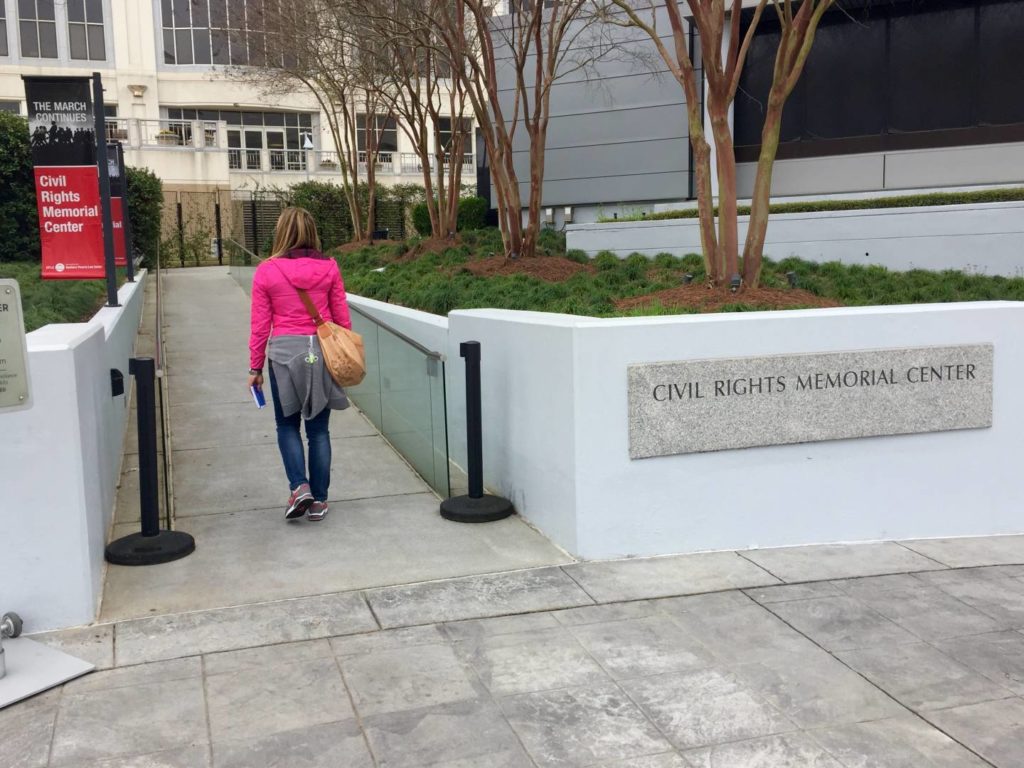 Not far from here there’s the Alabama Old State Capitol, the place where the Martin Luther King march from Selma to Montgomery to get the voting right for all the Afro-Americans finished – after many atrocities and pains suffered.

If you are fond of American History and Civil War, from the Alabama State Capitol you can follow an entirely dedicated path.

Indeed here just at the top of the great white steps, in 1862 Jefferson Davis was appointed as the first and sole president of the Confederate States. 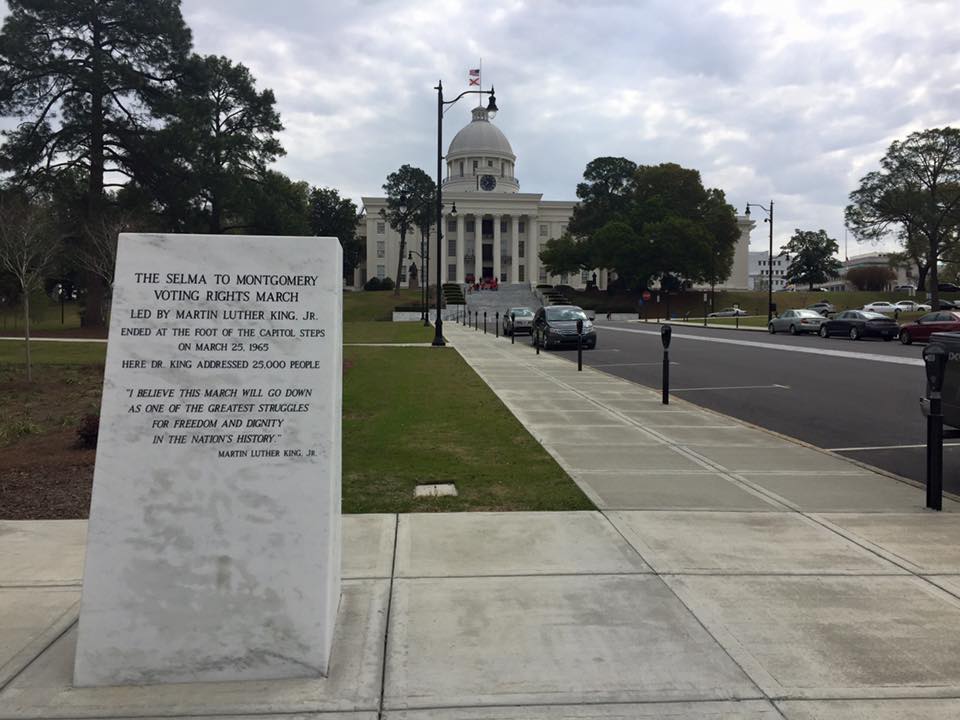 The stone and iron fountain at the center of the great Court Square rotary leading into Dexter Ave (the avenue taking to the Alabama State Capitol) marks the exact place where in the 1800s took place the open air market for the trading of the black slaves just arrived to the town through the Alabama River.

The slaves were exposed (sometimes naked to highlight possible physical defects), auctioned and then switched into their new owners’ plantations.

Keep going on foot along McDonough Street northwards, in few block you’ll meet the Old Alabama Town, an entire quarter of dwelling houses and original buildings of the first 1800s, perfectly preserved, a downright leap into the life and habits of the antebellum South. 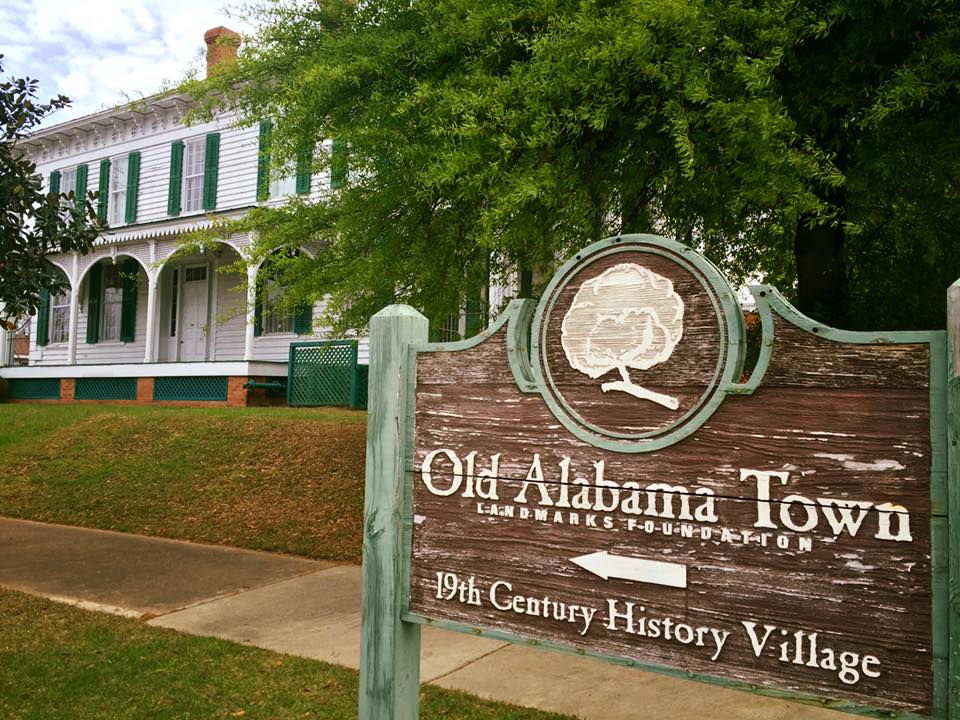 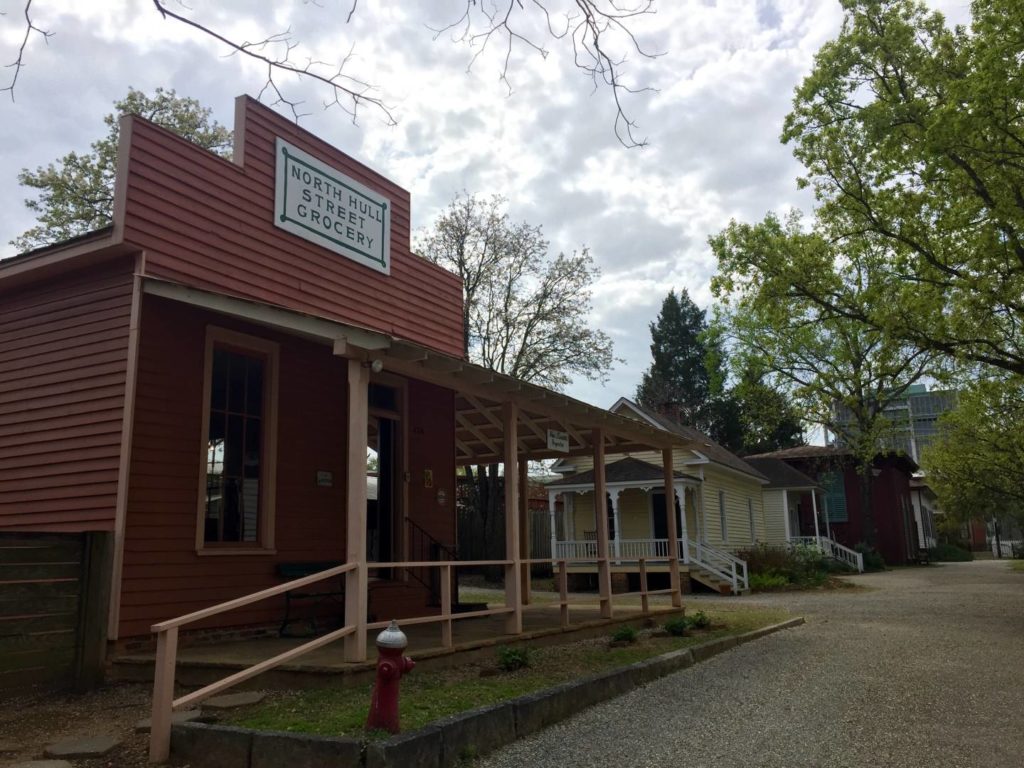 Inside the Old Alabama Town

The visit at the facility is being enriched by the presence of actors in period costume explaining on request life and daily duties’ aspects and episodes of that period.

About a kilometre east northwards you’ll meet the Old Oakwood Cemetery where the most part of the confederate soldiers of the Montgomery area are buried: from here it’s possible to go up the hill (you must walk a bit) and enjoy a wonderful view of a part of the town and of the State Capitol dome. 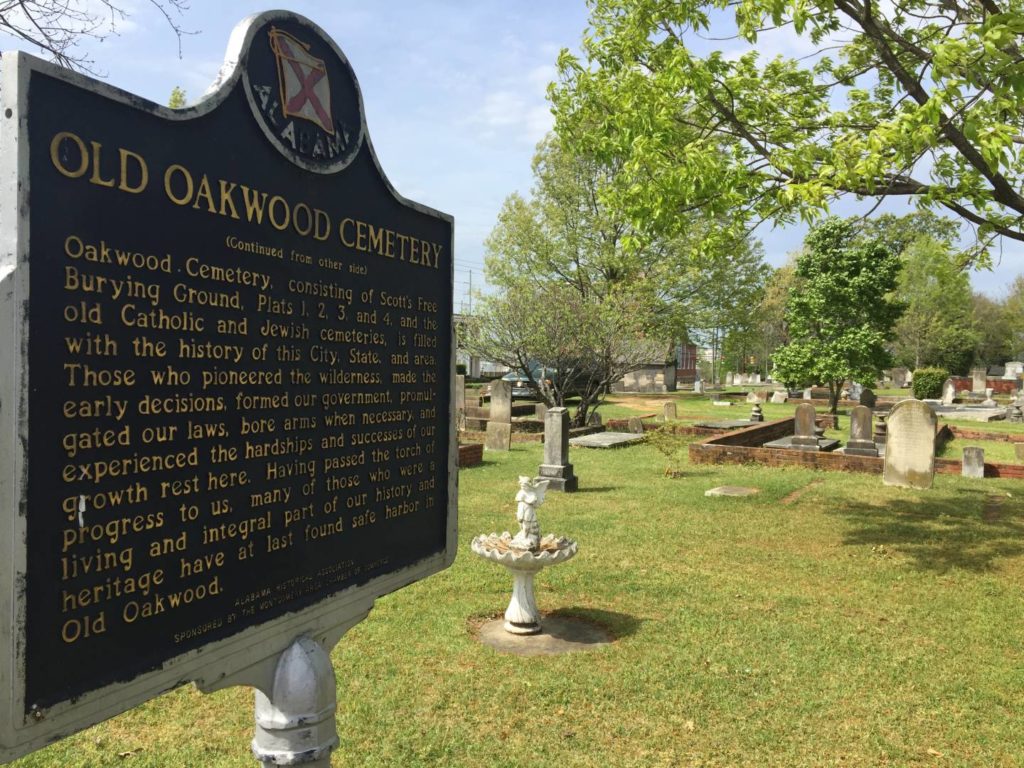 If you love music and particularly you are a fan of country music, you know that just leaving from Oakwood Cemetery it’s possible to follow a short itinerary related to one of the most popular country singer of the American history.

His grave, a slab of marble, with the inscription of a guitar and a country hat, is quite far: the cemetery is boundless, so you have to use the car and ask for a map to the guardian at the entrance.

On the contrary, the Hank Williams Museum is in the downtown at 118, Commerce Street.

It’s a sort of sacrarium where all heirlooms (guitars, clothes, precious registrations) related to the famous and unlucky country singer are preserved. It’s included the precious blue Cadillac where he was found dead on the 1st January 1953.

In few minutes from the museum you reach on foot the Riverfront on the Alabama River.

From here it’s possible to have a mini cruise on steamboat, maybe taking advantage of the early sunny afternoon to enjoy the surrounding landscape and relax, accompanied by the fresh air arriving from the river. 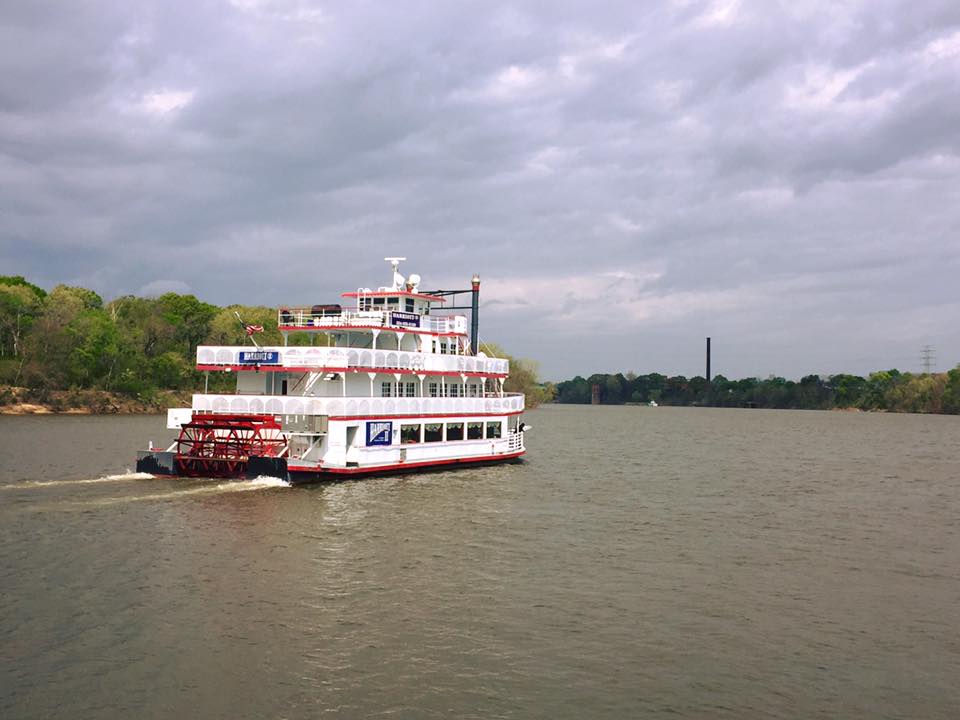 At the end, if you are fond of the American literature great authors, I can recommend you the visit at The Scott & Zelda Fitzgerald Museum. It’s the house where the writer lived for a year with his wife Zelda and his daughter Scottie.

Thanks to the guide of the very good, fond and competent director Willie Thompson (who speaks a quite good Italian, too), it’s possible to understand some Scott Fitzgerald’s aspects and situations, his most famous work The Great Gatsby (it was a flop when published), his unusual literary production, the life in America in the first 1900s and the complicated and fascinating relationship with his wife Zelda. 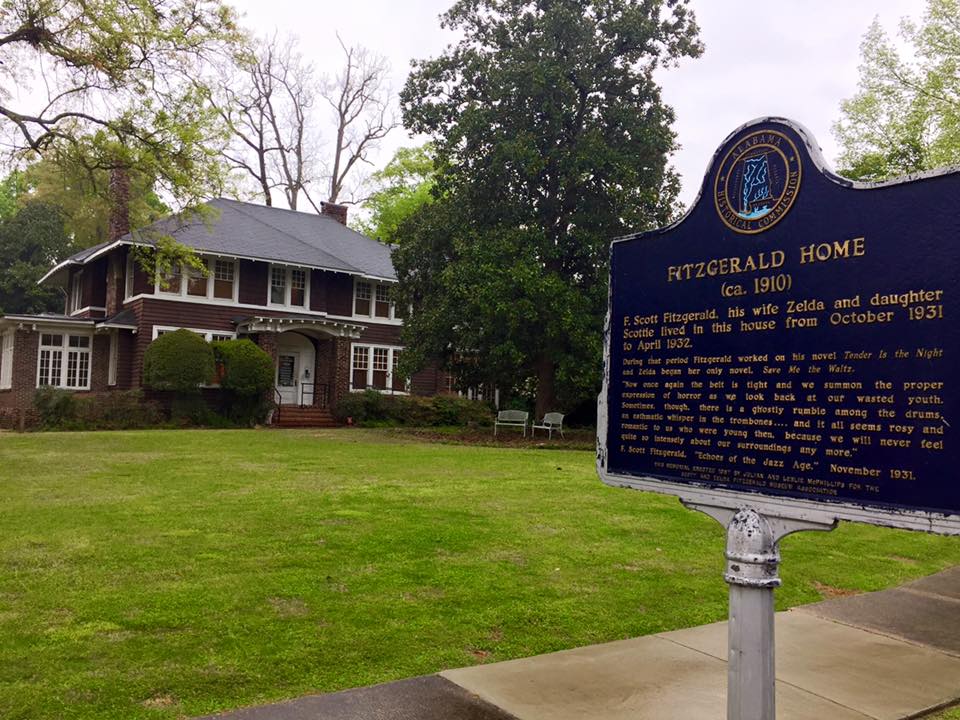 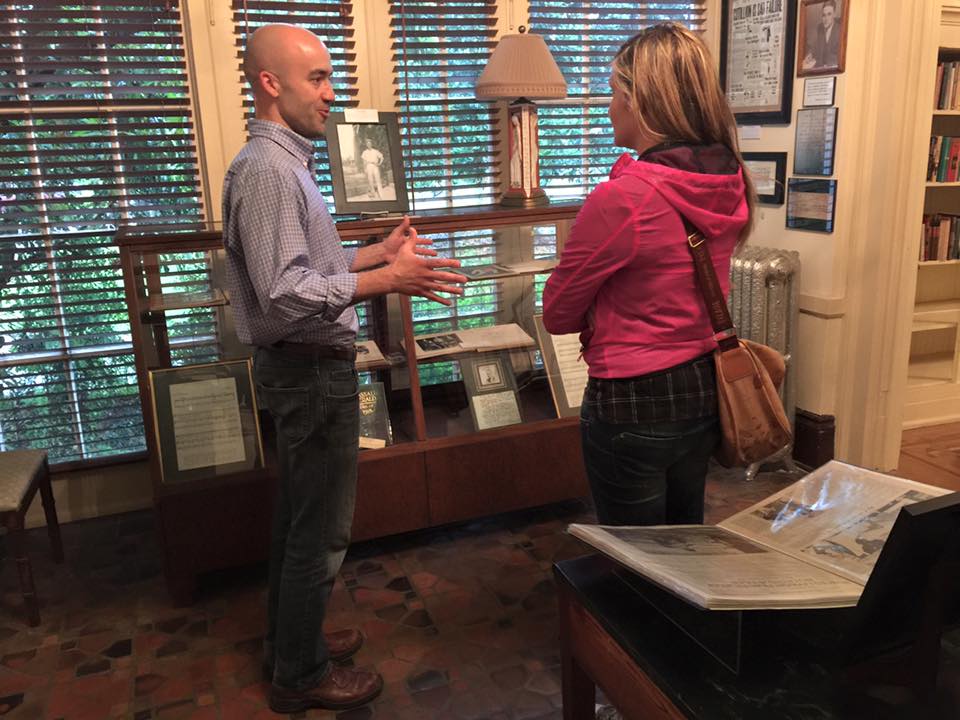 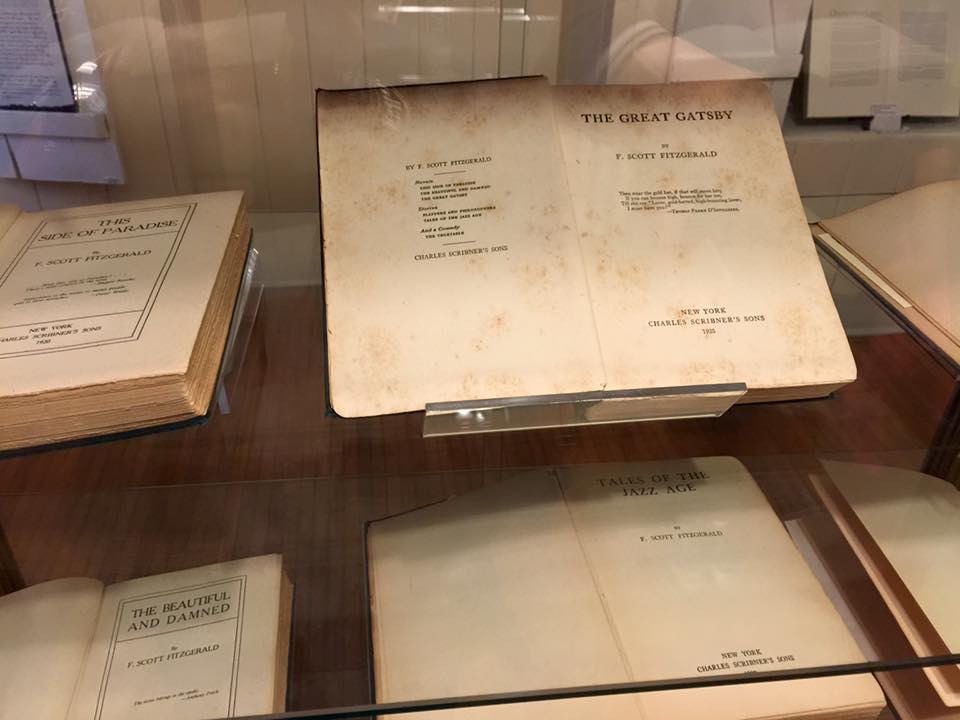 The Great Gatsby, an old edition

The museum it’s about 5 minutes far from the downtown by car.

It’s in the historic and charming Old Cloverdale residential area: it’s opened from Tuesday to Saturday from 9am to 5pm; on Sunday from 9am to 3pm. The guided tour lasts one hour about.

Discover Montgomery: where to sleep and to eat

As I’ve written before, the most part of the attractions of the town are in the downtown area. So it’s advisable to stay overnight in one of the hotels near Riverfront enjoying the several near parking.

I chose the Hampton Inn & Suites Downtown Montgomery: it is very central, with a plentiful breakfast included in the price and free parking at the rear. 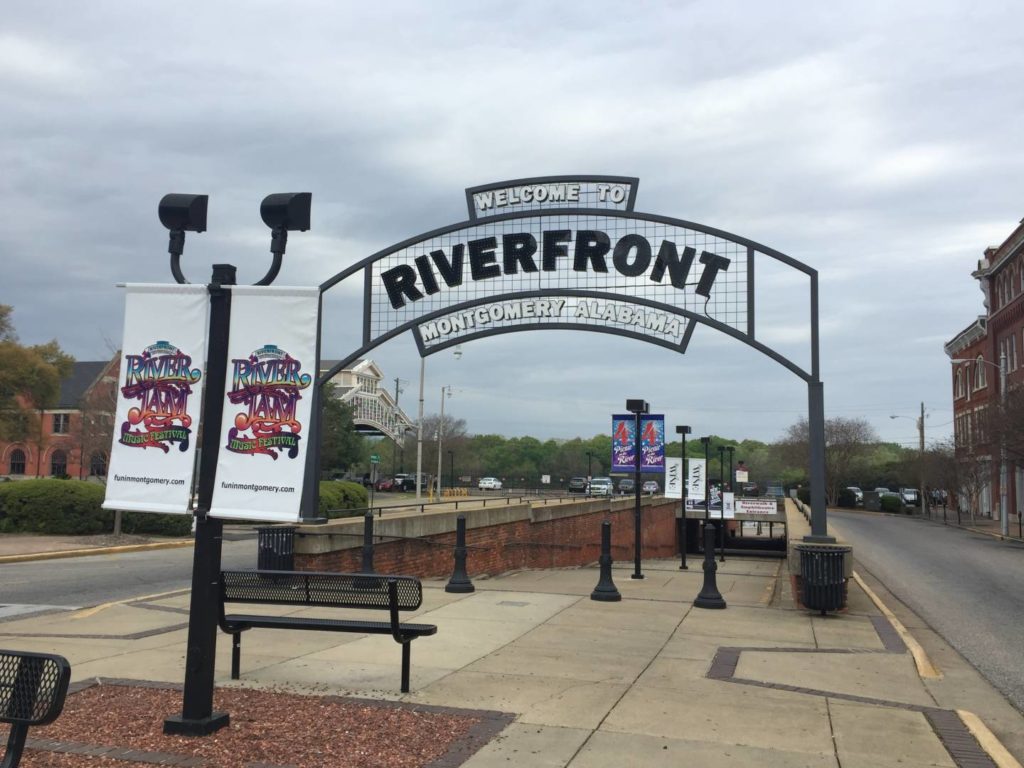 Just near the hotel quoted and the Riverfront there’s The Alley, a picturesque little street surrounded by the old buildings used for the switching of the black slaves to the town along the Alabama River.

After a cared restoration which have allowed to preserve a good part of the original buildings, today the whole area is dedicated to shopping, to the food service and nightlife with several restaurants and pubs where to spend a nice evening. 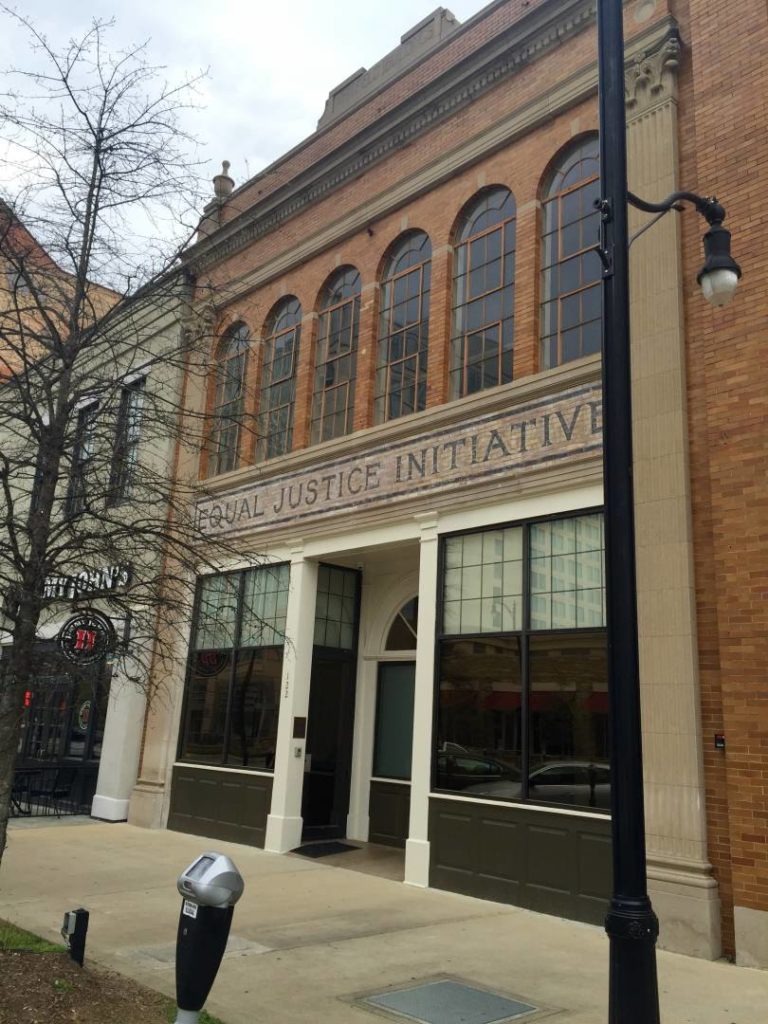 The Historic Distrct near The Alley 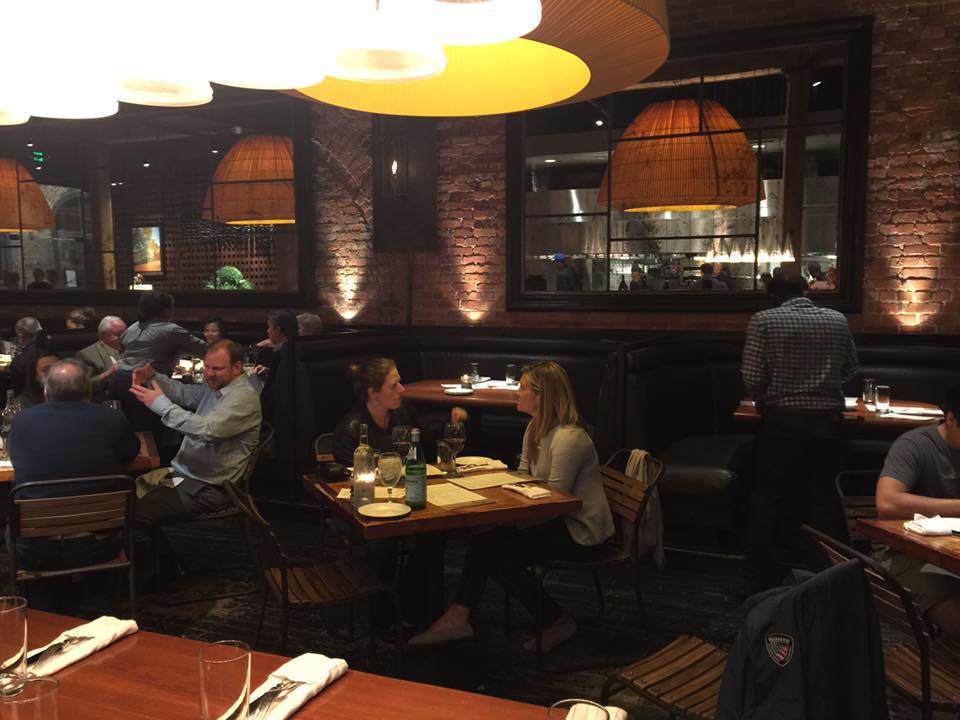 I recommend you the Central where to taste like a local the typical Alabama cuisine both for a quick lunch and for a more relaxed dinner. And the Dreamland BBQ, a sort of local institution, the right place to taste the real Alabama BBQ, a famous chain which is present in many other towns of the state. 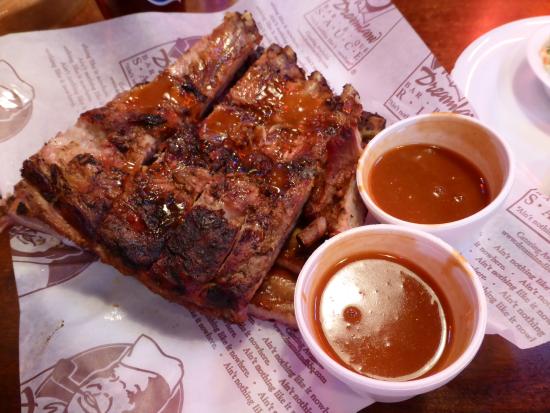 You can click here to find further tips about restaurants and clubs.